While India's recent decision to pull the plug on joining the RCEP may cause frustration among remaining countries, the move is unlikely to abort the trade pact after reports that the agreement is likely to be signed early next year.

If India were included, the RCEP would cover roughly 30% of global GDP (US$27.3 trillion) and half the world's population, making it the largest trade bloc.

"Without India, the RCEP will become less attractive," said Visit Limlurcha, vice-chairman of the Thai National Shippers' Council. "The population of the RCEP with India is about 3.5 billion, but the number will be slashed by 1.3 billion without the subcontinent."

Negotiations on the RCEP started in late 2012 at the 21st Asean Summit in Phnom Penh. With dozens of rounds of talks held since, the 15 participating countries have concluded text-based negotiations for all 20 chapters and market access issues.

India made last-minute demands in the run-up to the final stage of the 35th Asean Summit in Bangkok, derailing the talks.

"India has significant outstanding issues that remain unresolved," the RCEP countries said in a joint statement on Nov 4.

The world's largest democracy's refusal stems from concerns over its trade deficits and an anticipated flood of imports.

India had a huge trade deficit of $52 billion with China in 2018, according to the Economic Times. The country has also been logging trade deficits with other RCEP countries, including Australia, Indonesia, South Korea, New Zealand and Thailand.

There is also strong opposition coming from many groups in India, said Kaewkamol Pitakdumrongkit, deputy head and assistant professor at the Centre for Multilateralism Studies of the S. Rajaratnam School of International Studies.

"For example, the manufacturing sector fears a surge of Chinese imports if India opens up [its economy]," Ms Kaewkamol said. "Also, the agricultural sector fears a flood of products from Australia and New Zealand that would make Indian farmers, especially small ones, lose out from competition."

India's biggest challenge is that there are few vocal champions of trade and even fewer in favour of the RCEP, said Deborah Elms, executive director of the Asian Trade Centre. Every potentially affected group has raised alarm bells about the harm that will be done to its sector and the overall Indian economy, she said.

"The problem is that staying out of the fastest-growing, most dynamic part of the global economy is unlikely to help Indian firms become more competitive," Mrs Elms said. "The trade deficits that already exist without the RCEP will probably widen."

With or without India, the RCEP agreement has been scheduled for official signing next year, possibly in February.

A target date for the RCEP's entry into force could be 2021 or January 2022, in accordance with Asean tradition, Mrs Elms said.

"It will probably not need a certain number to clear a threshold to trigger entry, like the Trans-Pacific Partnership, but it is also unlikely that all 15 or 16 [member countries] will actually be ready on the same date," she said. "This has not happened with the various Asean+1 trade deals either.

"The most important thing is for members to complete any domestic-level procedures [such as submission to legislatures for approval] or changing rules, laws and regulations to ensure compliance by the start date." 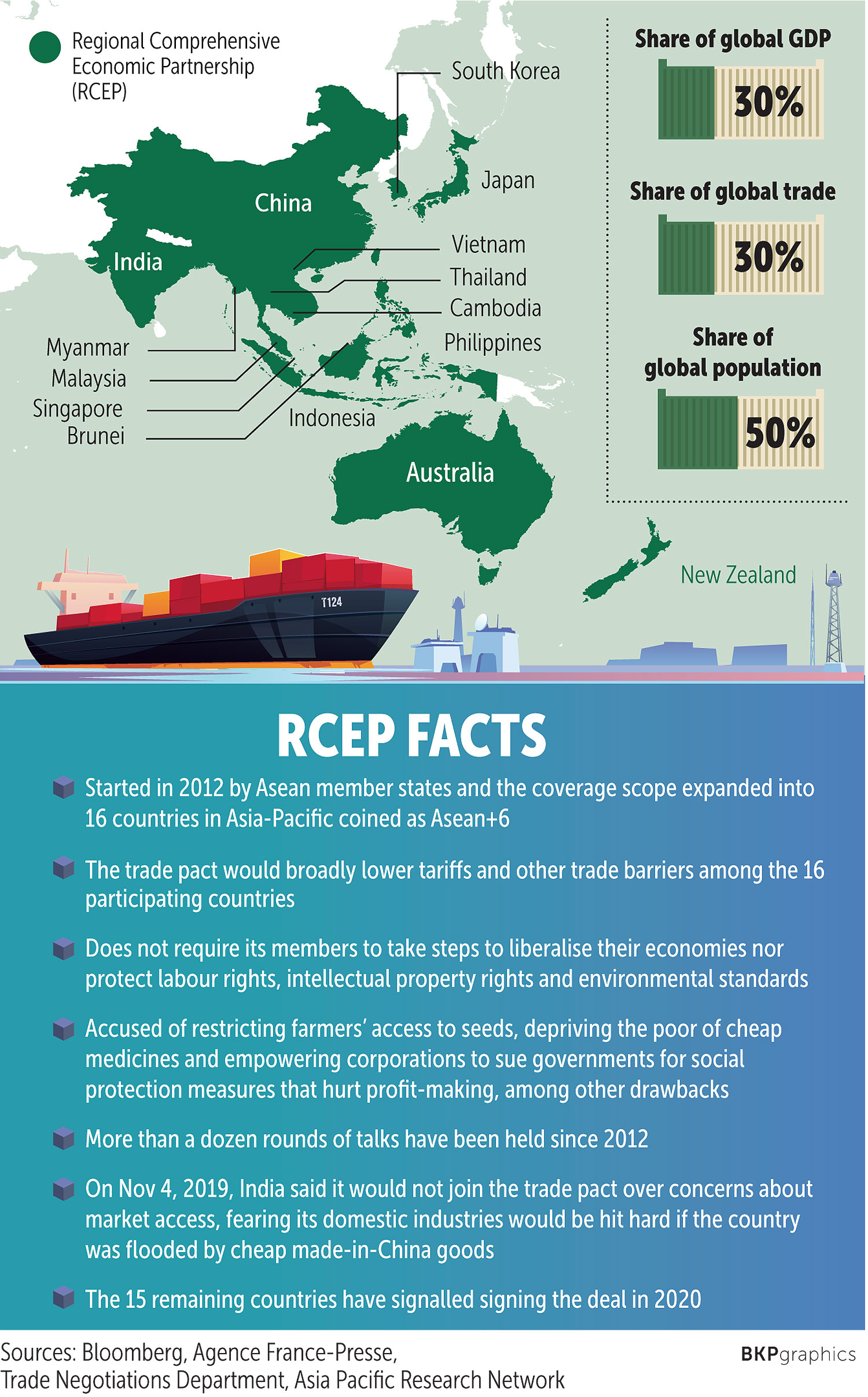 Despite India's opposition to various aspects of the RCEP on the surface, talks behind closed doors told a different story.

A source working in international trade negotiations who requested anonymity said India had agreed to around 99% of the trade bloc's 20 chapters, leaving only investment protection up for negotiation.

India proposed a legal protection for investment at the local administrative level apart from the central government, but certain members strongly opposed this, causing India to withdraw from the RCEP.

"The decision to pull out of the RCEP during the Asean Summit was correct," the source said. "This is a good example of how developing countries need to thoroughly study the impact before signing any trade deals.

"Free-trade agreements offer not only gains, but also losses. India conducted a thorough analysis and found its domestic economy would be negatively affected by this agreement in the future."

The Indian government wanted to protect the interests of farmers and those at the grassroots level from investors with deep pockets, the source said.

In the past, trade deals have caused some unfavourable side effects in many countries, leading to lawsuits filed by foreign investors against local governments, as well as hefty trade deficits.

Overwhelming foreign investment can also have an impact in terms of business liquidation and lead to environmental damage.

According to the source, India's absence from the trade pact is considered a loss and a "failure" in the negotiations.

Aat Pisanwanich, director of the Center for International Trade Studies at the University of the Thai Chamber of Commerce, agreed and said the other 15 countries need to persuade India to return to the negotiating table.

"Asean will suffer a big loss if it ignores India, as the country is one of the world's largest markets, second only to China," Mr Aat said. "India is not yet capable of producing sufficient products for domestic demand and still imports a lot of goods, particularly agricultural products and processed foods."

He believes India still wants to be a part of the RCEP because it engaged in dozens of rounds of talks and has only a handful of free-trade deals with other countries.

"India's key areas of concern are effects on local farmers, small and medium-sized enterprises, the auto sector and a flood of cheap items such as tea, coffee, dairy products, rubber and garments," Mr Aat said. "India is also worried about an investment clause because this thorny issue may affect its 'Make in India' policy, which it hopes to use to stimulate domestic investment and local consumption", thus helping to make the country a global design and manufacturing hub.

With India saying farewell to the RCEP for now, questions are being raised about the extent to which Thailand stands to benefit from the trade pact, as exports account for about 70% of its GDP.

As an export-dependent economy, Thailand "needs" the RCEP to integrate its economy further into supply chains and larger markets in Asia-Pacific, Mrs Elms said.

"The RCEP will make it easier to do business across all of Asia," she said. "It will also make it more attractive for firms to set up in Thailand or look there as an expanded market for goods and services."

Even without India on board, the RCEP will enable Thailand to advance its trade and investment ties with other economies, Ms Kaewkamol said.

"Regarding who will win or lose in Thailand, it is difficult to say because the RCEP agreement has not been released yet," she said.

Thai exporters seem to be in consensus that the country can reap benefits from participating in the RCEP in terms of trade, price value and innovation.

"Manufacturers will have a variety of raw materials available at a cheaper price from many sources, while exporters will have more products to sell and can develop new ideas and innovation from a variety of sources," Mr Visit said.

Investors and professionals will have more opportunities to establish new businesses by gathering quality raw materials to combine with improved competitiveness in production, he said.

Mr Visit suggested Thailand extend bilateral negotiations to India to expand the trade framework between the two countries using suitable compensation or economic exchange. For instance, Thailand could allow Indian workers to be employed in service sectors that require English skills and a service-minded attitude, but some occupations would be reserved for Thai workers. 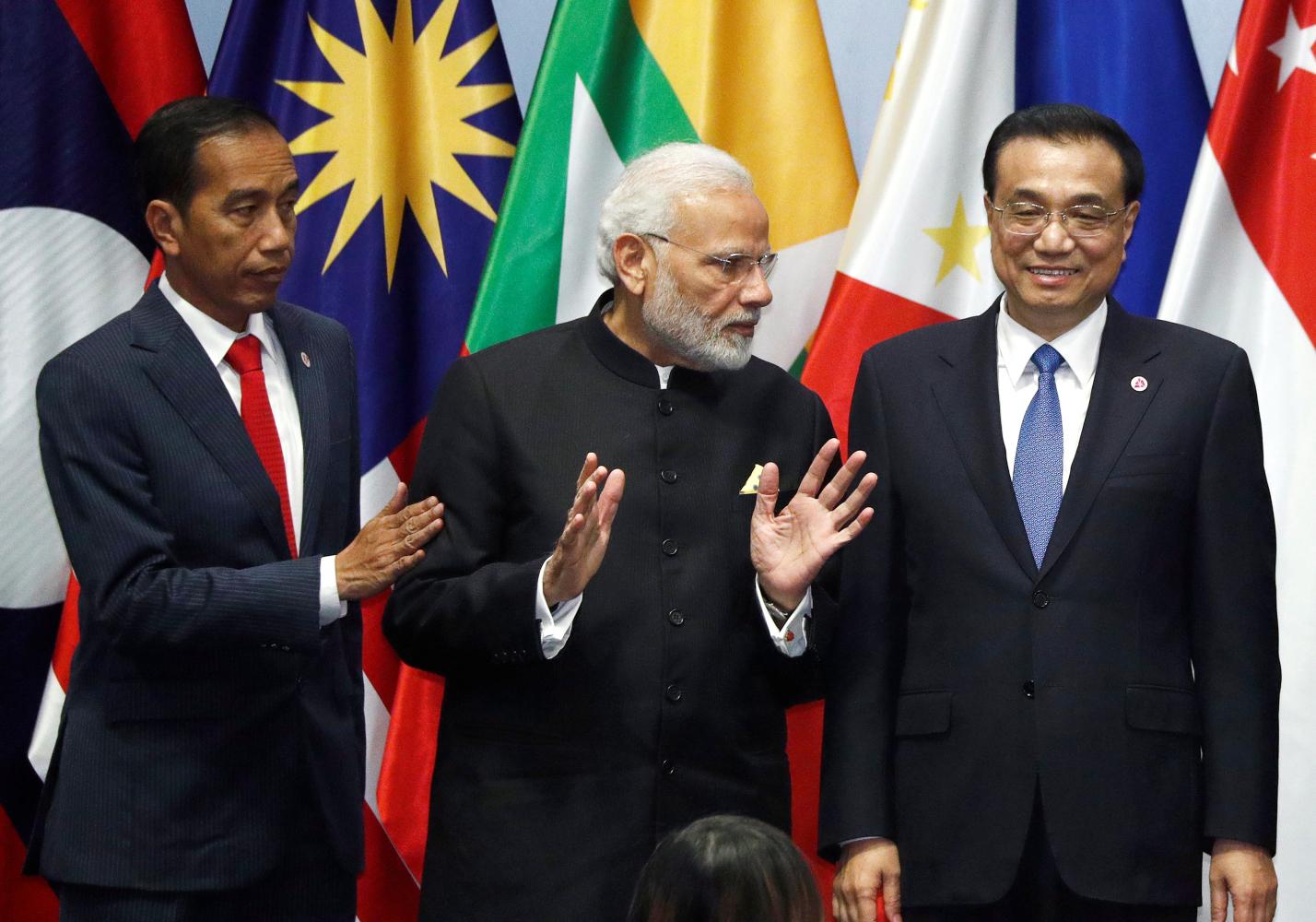