Demand in Asean for hybrid EVs

By 2025, Toyota aims to have sales of more than 5.5 million EVs, including more than 1 million zero-emission vehicles (BEVs and FCEVs).

The company announced its EV plan is progressing faster than expected. All Toyota models will have EV versions from 2025.

In October, Toyota created a showcase for electric mobility of all usage types, including ordinary people, elderly, children and those with disabilities at the 46th Tokyo Motor Show 2019, organised by the Japan Automobile Manufacturers Association.

The showcase ran from Oct 23 to Nov 4 in the Odaiba district of Tokyo.

Toyota presented the second generation of the Mirai FCEV and the ultra-compact BEV, as well as concept BEV for the Lexus LF-30. 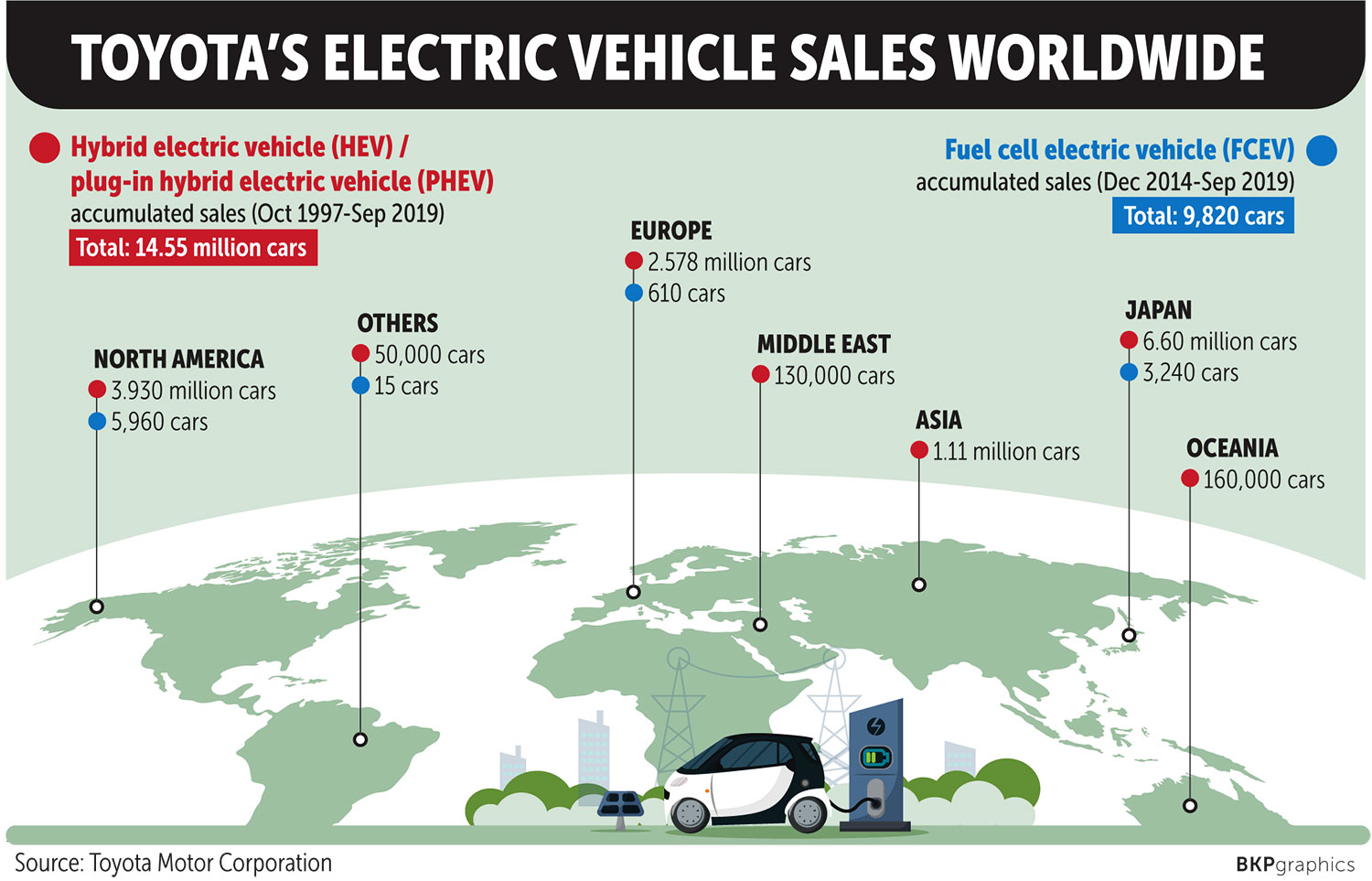 The ultra-compact BEV will be sold commercially in late 2020, while Toyota plans to develop Lexus EVs for the global market in the middle of the decade.

Some 3,700 electric mobility products and vehicles will be made for the upcoming Olympic and Paralympic Games Tokyo 2020 such as APMs (Accessible People Mover), e-Palettes, Toyota Concept-i (LQs) and Walking Area BEVs.

Toyota will provide assistant robots throughout the Tokyo 2020 Summer Olympics.

The company foresees 2050 as the decade to challenge for zero-emission mobility.

Toyota sells HEVs such as the Prius, Camry, Corolla, C-HR and Yaris, including the Lexus ES300h and RX400h, while only the Prius comes in PHEV.

Toyota has yet to sell BEVs and the Mirai car is the only FCEV version.

"On a global level, the corporate average fuel economy [CAFE] aims to reduce CO2 emissions by 50%, while the zero emission vehicle [ZEV] or new energy vehicle [NEV] standards expect production of new BEVs and FCEVs to account for 20% of new vehicles," he said.

Mr Terashi said 20% adoption of only BEVs and FCEVs will decrease CO2 emissions by the same level, but a car market with four electric categories will be better able to meet the CAFE target of 40% CO2 reduction.

Toyota said the current versions of Prius HEV and PHEV and the Mirai can meet the CAFE targets for 2025 and 2030.

When asked why Toyota has been slow to launch BEVs, Mr Terashi said, "No manufacturer making all BEVs can be profitable."

The BEV version of the Toyota RAV4 did not succeed in the US market, he said.

"The cost of lithium-ion batteries for BEVs stands at roughly ¥1 million [277,280 baht], excluding other component costs in this zero-emission car," said Mr Terashi.

"BEVs seem too disadvantageous to be produced from a business perspective, so output will have to be in response to motorist demand."

Mr Terashi, also chief officer for Toyota ZEV Factory, said each country has varying demand for EVs, so Toyota has to introduce suitable models for each market.

The Chinese government offers a purchasing grant of up to ¥1 million for BEVs.

The US had 228,600 BEVs sold during the period, accounting for 1.3% of total domestic sales. The US federal government has offered up to ¥800,000 ($7,339) in tax exemptions per purchase, excluding incentives at the state level.

"China's subsidies were successful, proving to be the fastest method for BEV market formation," he said.

"To develop zero-emission vehicles, Toyota and BYD from China announced the joint development of BEVs, exchanging experience and know-how on batteries and bodies to reduce power consumption by 20%." 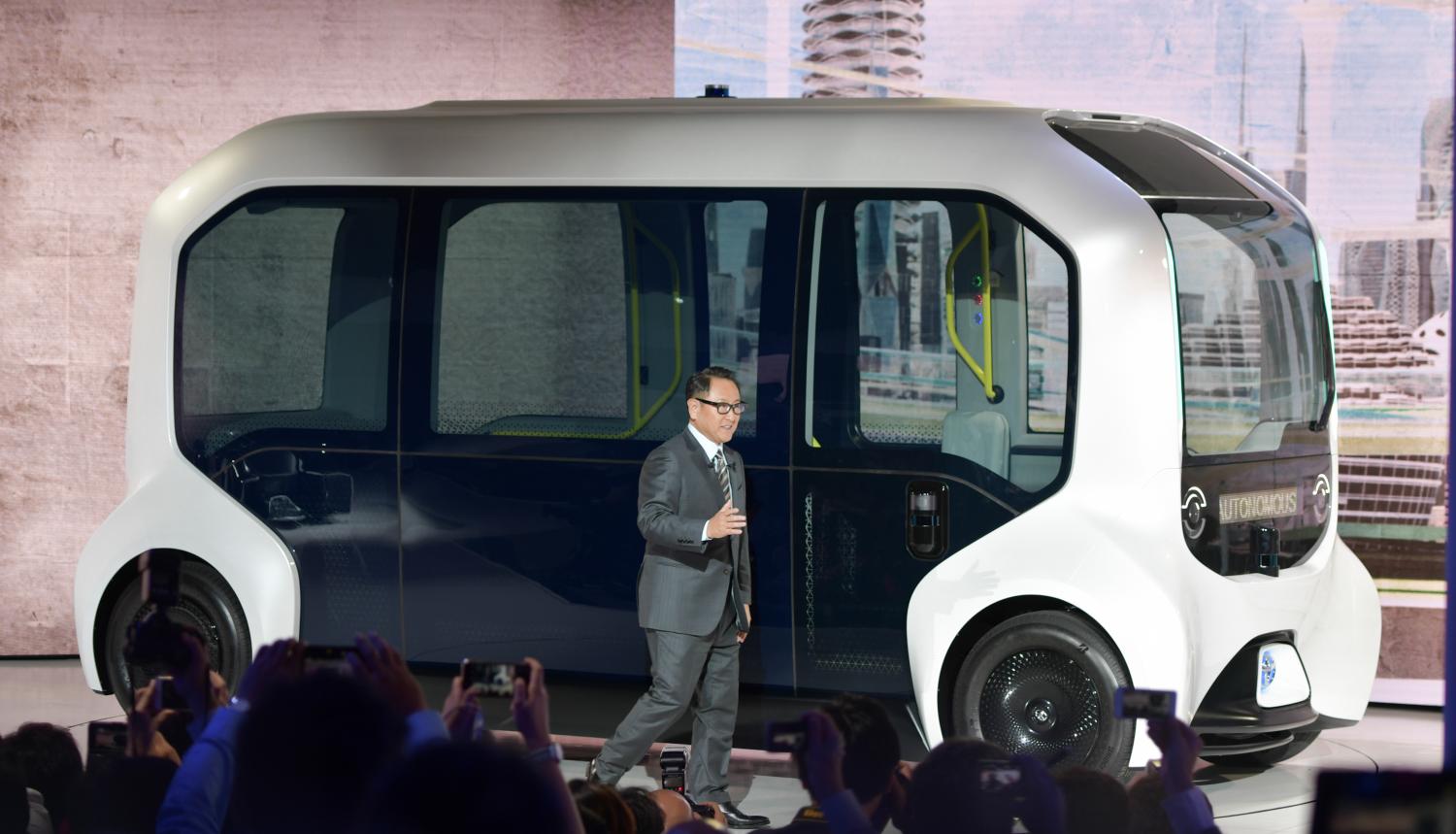 President Akio Toyoda's remarks from the Tokyo Motor Show 2019. He is with the e-Palette. (Photo courtesy of Toyota Motor Corporation)

Toyota has other partners to improve batteries such as Japan's Panasonic and China's CATL.

Mr Terashi said Toyota has adopted and applied different plans and policies for electrification in each region.

"For India, where Maruti Suzuki had the largest market share for compact cars, Toyota teamed up with Suzuki to develop compact BEVs via a cooperation agreement," he said.

"Toyota makes a variety of eco-friendly cars in response to customer demand," he said.

"The next stage of electric development will be PHEVs, which have more driving distance in electric mode."

Mr Kawai said the region needs to think about overall power generation and consumption, so HEVs are probably poised to gain a larger market share for the time being.

"It will be difficult to determine when PHEVs, BEVs and FCEVs in Southeast Asia will be adopted. The timing depends on how much demand there is for new technologies," he said.

Mr Kawai said government policies in Southeast Asian countries are developing as policymakers are concerned about the environment and the impact from vehicles.

"HEVs are better for the environment and motorists appreciate greater fuel efficiency. People are starting to pay attention to distance and electricity in PHEVs," he said. "People compare them to the electric stage of BEVs, requiring power demand and supply calculations in each country."