The Thailand Automotive Institute (TAI) has requested the government set up a National New Generation Vehicle Committee to push forward the government's electric vehicle (EV) scheme and increase sales as the market develops. 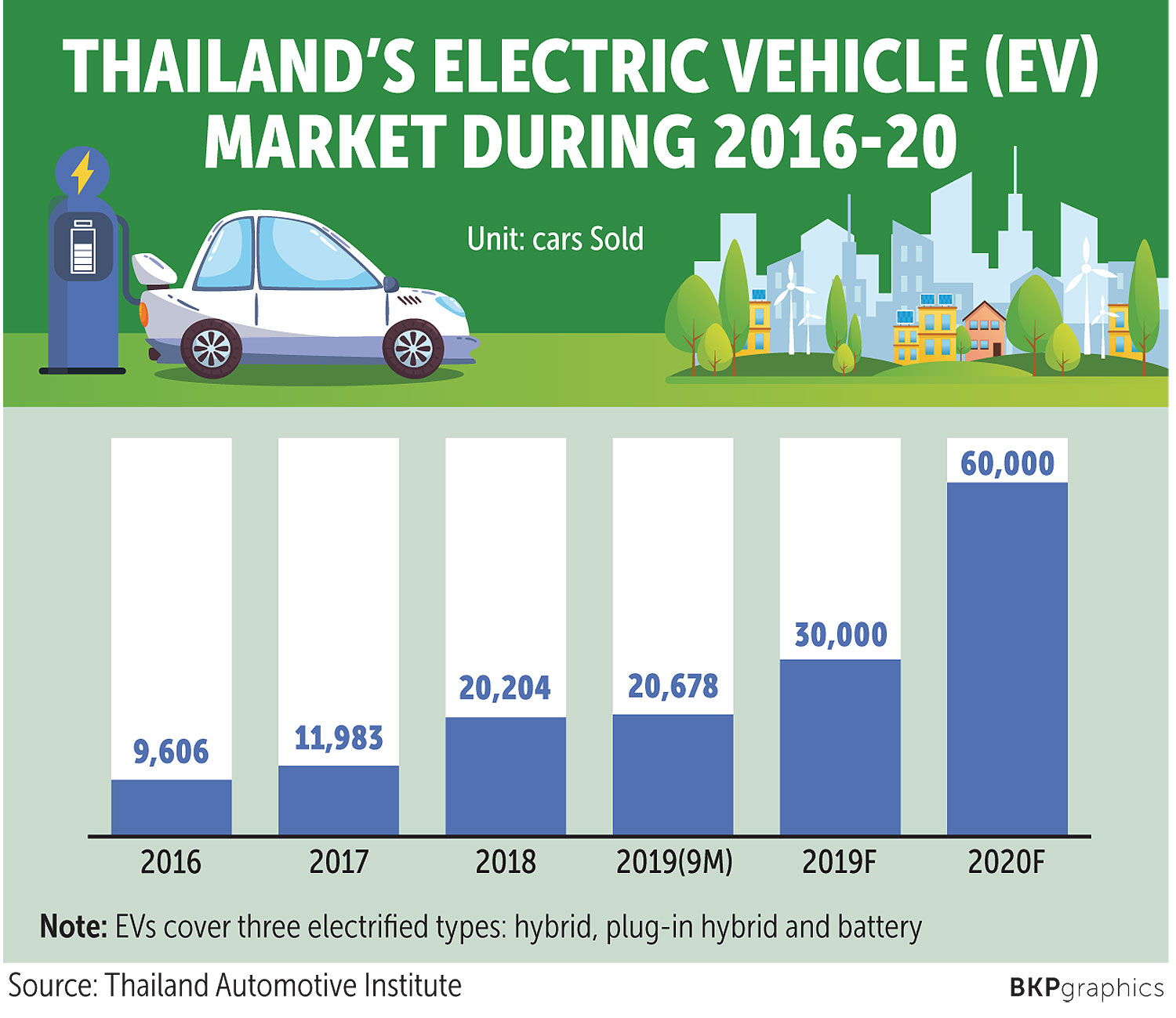 The committee would consist of related parties from the public and private sectors, including four ministries (Industry, Energy, Finance and DES), educational institutes and automotive companies.

Adisak Rohitasune, acting president of the TAI, said EVs are being promoted under the government's S-curve policy, but manufacturers have not received any encouragement for EV adoption in Thailand.

The TAI is calling for the government to reconsider the excise tax for new EVs after two tax cuts were approved in mid-2017 and early 2019, lowering the retail price of EVs.

The EV scheme was launched by the Board of Investment (BoI) in late March 2017.

"Battery EVs have a 0% excise tax during 2020-22 if manufacturers apply for BoI incentives, after which the rate increases to 2%," Mr Adisak said. "Plug-in hybrid EVs have a 4% excise tax under BoI privileges, but when compared with the two EV versions, battery EVs seem less attractive."

He said each manufacturer granted BoI privileges has to begin EV assembly within three years after being granted the incentives.

The TAI has a long-term roadmap for Thailand to become a production hub for EVs in Southeast Asia, with a goal to produce 2.5 million cars in 2030. Of the goal, 1.5 million cars are set for domestic sale.

Some 15% of the total production must be battery EVs, and 60% of produced cars have to be on the third level of vehicle autonomy, which entails conditional automation for intersection pilots, emergency driver assistance, highway autopilot and valet parking assistance.

Mr Adisak said Thailand aims to be a production hub for EVs in the long term in order to maintain the country's automotive competitiveness in Southeast Asia.

"The government should emphasise the EV industry with attractive privileges and incentives for both demand and supply," he said.

Aditad Vasinonta, deputy director-general of the Office of Industrial Economics, said the country's automotive industry is important to support the economy, while the government has set the EV sector as one of 12 targeted industries under the S-curve policy.

He said the next step for the automotive industry will be to move towards the CASE (connected, autonomous, shared, electrified) concept, as the technologies are changing rapidly and disrupting the overall automotive sector.

Mr Aditad said the TAI signed a letter of intent for three years with the Japan External Trade Organization (Jetro) in May 2018 to develop the country's automotive industry under three aspects: sharing automotive data, improving higher technologies of auto parts and developing human resources for EVs.

Atsushi Taketani, Jetro's president in Bangkok, said Thailand is the key production zone for Japanese car makers, which make up 90% of the country's car output.

For pickups, Toyota controls 33% of the country's output, followed by Isuzu (20%) and Mitsubishi (17%). US-based Ford ranks fourth with 14% in the segment.

Mr Taketani said Jetro supports all measures enacted by the government to increase the EV fleet in Thailand.