Highly skilled workers in Thailand expect to see a 20-30% increase in salary if they switch jobs in 2020, another obstacle to companies already struggling from a shortage of talent and high turnover rates, according to a report by the recruitment agency Robert Walters. 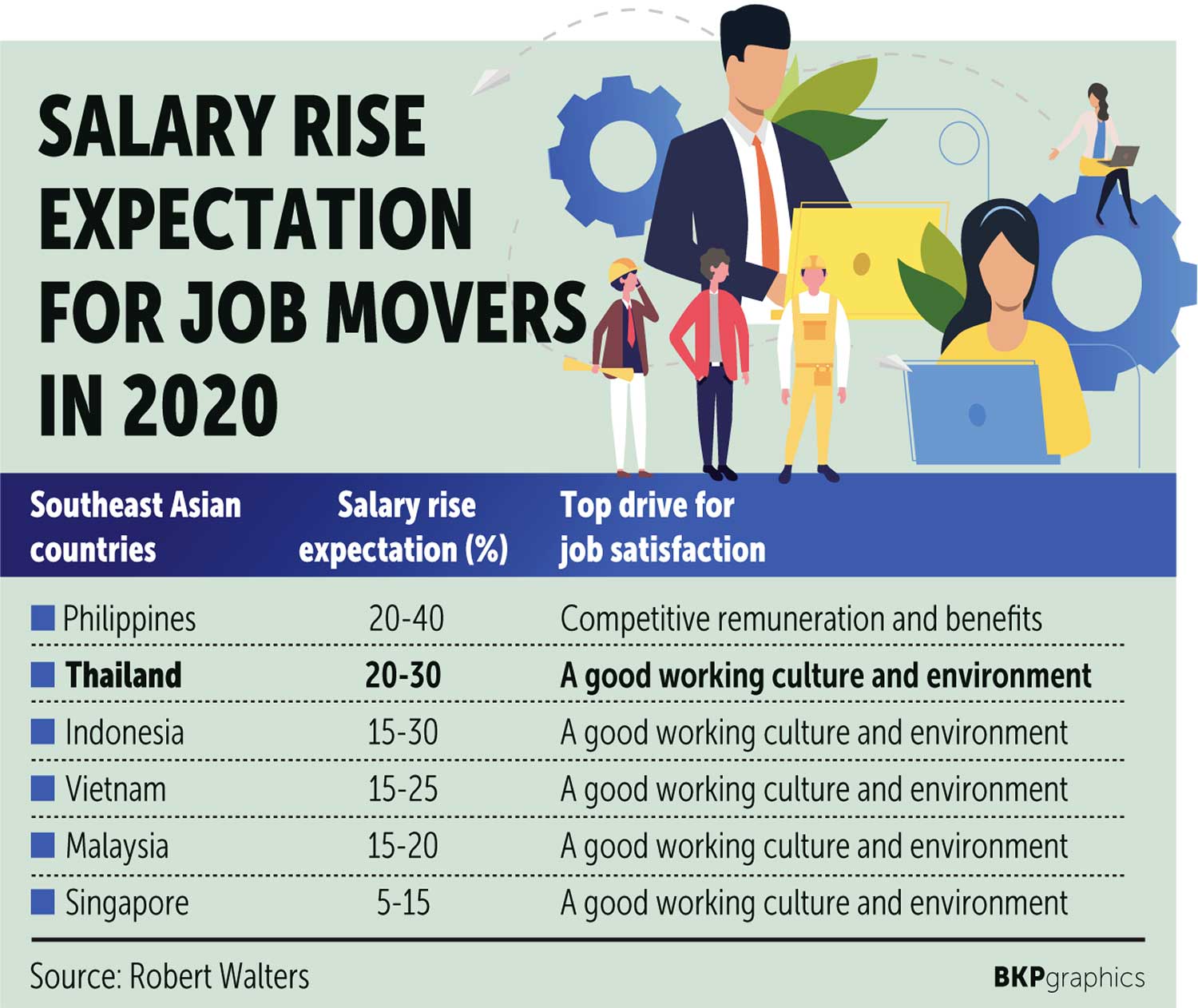 The survey of mid-senior to senior level professionals also found a majority of workers in these top positions expect around a 7% increase in salary each year staying at the same job, and a yearly bonus of 15% or more of their annual salary.

Respondents cited a good work culture and environment as the top source of job satisfaction.

Robert Walters predicts actual salary increases in 2020 to be 15-20% for those switching jobs and 2-7% for those staying at the same job.

However, tech, digital and client-facing professions can see a higher increment of 20-30% when they switch jobs.

The salary expectations are stable from last year's survey, which only measured the bottom range of the expected increase at 20%.

Some 29% of professionals surveyed in Thailand cited career progression as the primary motivation for changing jobs, beating out increased salary and benefits.

Punyanuch Sirisawadwattana, country manager for Robert Walters, said hiring managers will likely have to meet these high salary and bonus expectations of skilled workers because of the talent shortage in Thailand, but the trend is unlikely to continue.

Thailand's expected salary increases are on par with other emerging markets in Southeast Asia, but far higher than in Singapore (5-15%) and many developed European countries.

"These high salary increases can't go on forever as the costs of hiring will become too high," Ms Punyanuch said.

"Companies will have to start focusing on internal development and hiring less experienced workers based on potential."

However, employers in Thailand are still reticent to hire less experienced applicants and train them in-house. Another recent Robert Walters survey found 48% of hiring managers in the country have never hired an applicant that was less experienced based on potential.

She said the economic slowdown and declining export sector has not affected the results of this year's survey and hiring remains strong for top level positions in manufacturing.

Thailand also has relatively high turnover rates at top positions, with most employees working at one job for about two years, and 30% staying less than two years at one job, according to the survey.

Those working in more established industries like finance and at larger companies tend to work at one company longer than those in newer, faster-moving sectors like technology.

The IT field is witnessing the largest labour shortage, followed by positions in digital marketing and e-commerce, said Ms Punyanuch.