Regardless of slumping growth forecasts and export figures, business optimism in Thailand grew nominally this year but still measures lower than the global and Asia-Pacific average, according to a report by Grant Thornton. 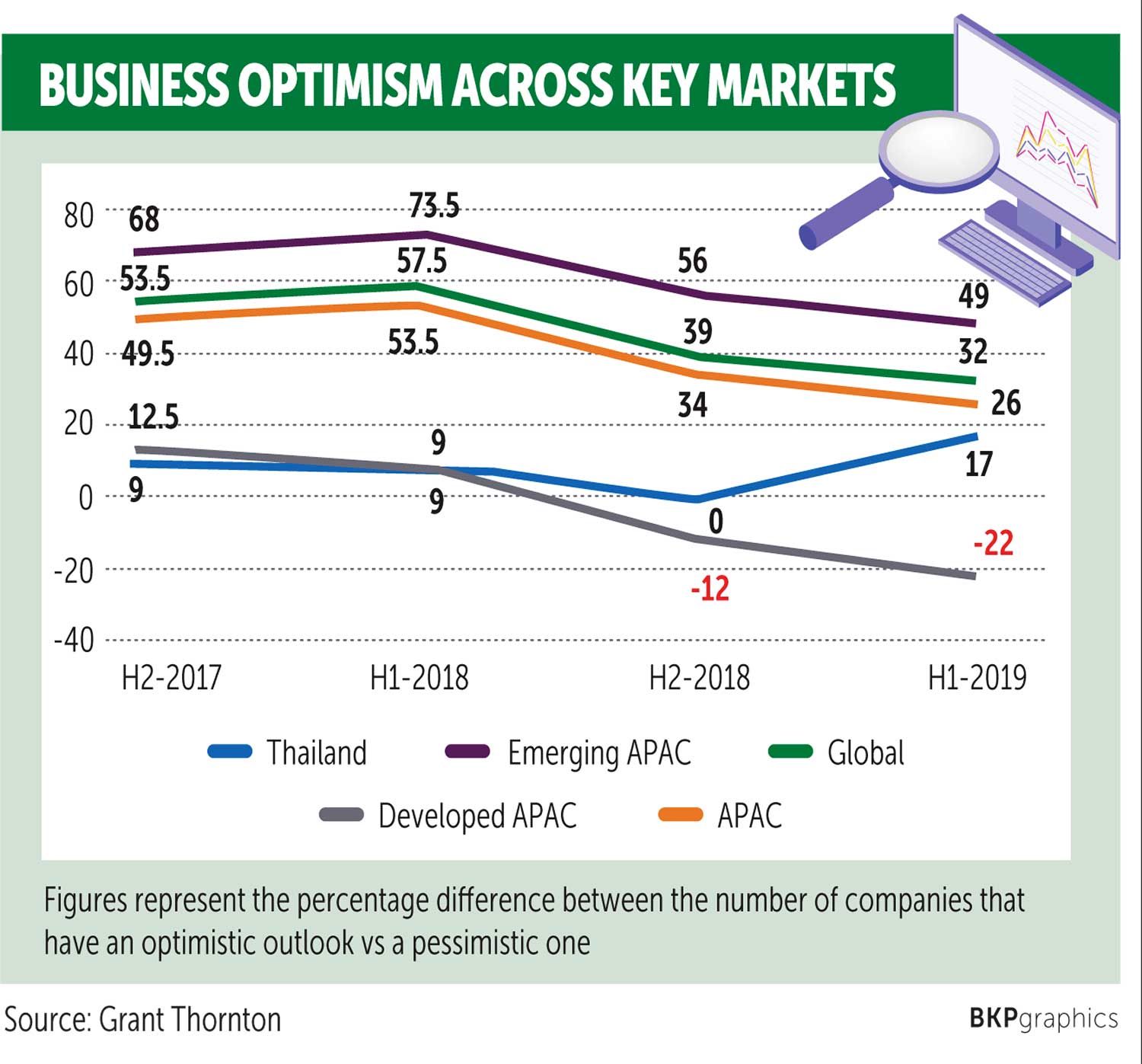 The average for the 33 countries surveyed was 32%, and the Asia-Pacific average was 26%, while emerging Asia-Pacific countries (including Thailand) averaged 49%. While below the global average, Thailand is still bucking the global trend that saw pessimism on the rise across key markets since 2017.

Thailand ranked the highest globally in economic uncertainty by business leaders at 75%, compared with 54% for Asia-Pacific and 46% globally.

"Unresolved internal and external issues each contributed to Thailand's business community, registering the highest rate of economic uncertainty at 75%," said Ian Pascoe, chief executive of Grant Thornton Thailand. "These issues may range from political turbulence to uncertain trade agreement outcomes, to months-long delays in approval for the government's 2020 budget expenditure."

The top constraints to business outcomes in Thailand, according to the companies surveyed, were economic uncertainty, labour costs, energy costs, shortage of finance and availability of skilled workers. Businesses say they expect to invest the most in staff skills, followed by IT then R&D.

Despite the media and the government worrying about the strong baht's effect on the economy, Mr Pascoe said there are more pressing issues to worry about.

"People need to be wary of blaming the exchange rate for the country's economic problems," he said. "You don't always see a weaker currency leading to export growth, and it doesn't necessarily mean an economic slowdown because you have a stronger currency."

Tanva Mahitivanichcha, a partner at Grant Thornton Thailand, said mid-sized companies in Thailand are having trouble receiving financing from banks, especially in the property sector and tourism, where revenue has fallen significantly.

"Some 58% of businesses in Thailand have indicated concern about the difficulty of securing new loans from financial institutions," Mr Tanva said. "This roadblock could be the result of tighter lending conditions imposed by Thailand's central bank."

While the survey only pertains to the first half of 2019, Mr Pascoe said economic optimism is unlikely to improve because the second half of this year is already showing signs of a drop-off in economic activity globally and a decline in exports in Thailand.

He said geopolitical issues stemming from economic inequality are likely to raise concerns for governments and economies, particularly in Thailand, where inequality is among the highest in the world.

Grant Thornton predicts Thailand's GDP growth in 2020 to be around 2.5%.