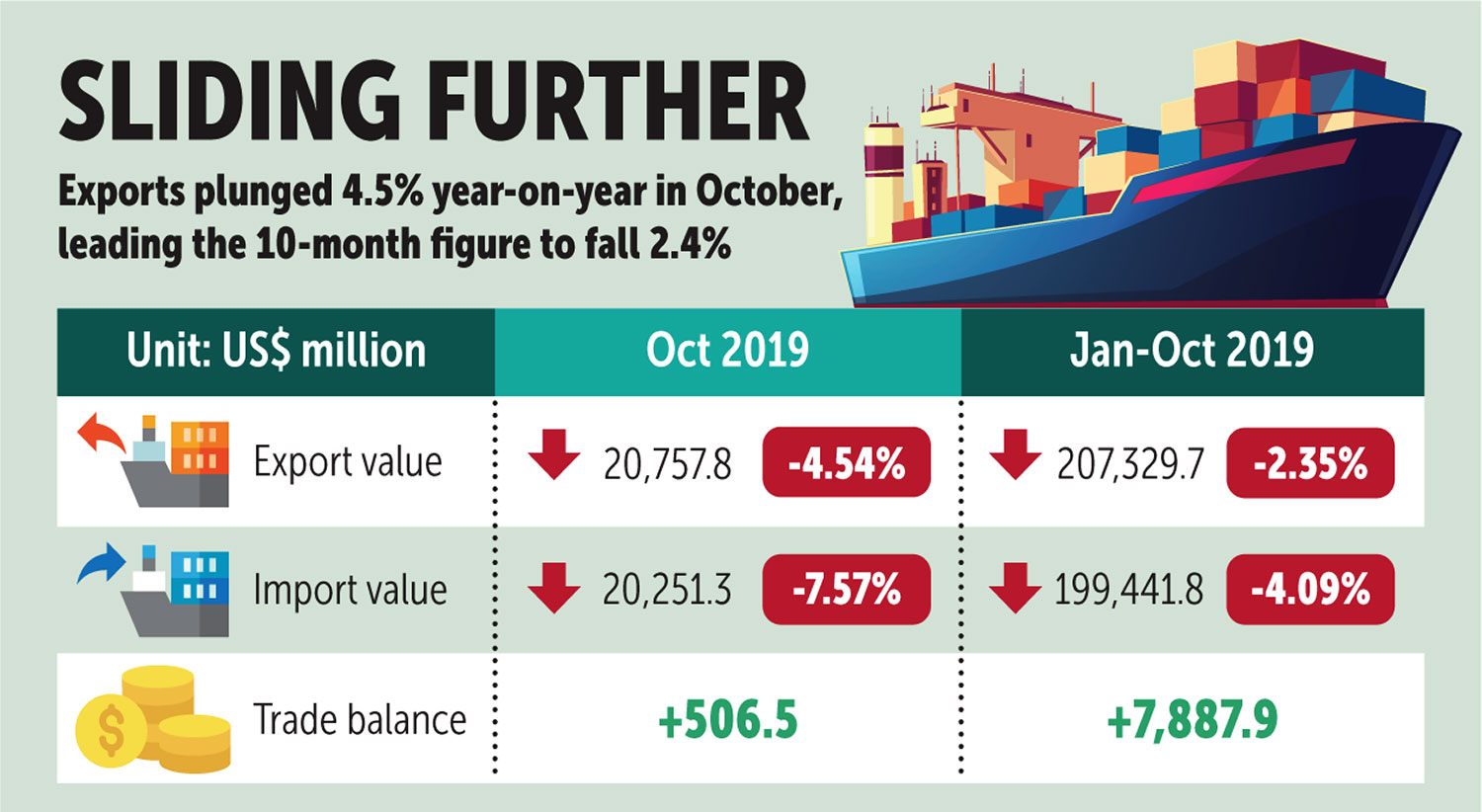 The Commerce Ministry said yesterday that customs-cleared outbound shipments fetched US$20.75 billion in October, down 4.5% from the same month last year after falling 1.4% in September and 4% in August.

"Thai exports were still affected by the fragile global economy," said Pimchanok Vonkorpon, director-general of the Trade Policy and Strategy Office, the economic planning unit of the Commerce Ministry. "Protectionist measures have negatively impacted most of Thailand's key trading partners, leading to lower exports to those countries. Moreover, exports were hit by lower oil prices, which led shipments of finished oil to plunge by 35.4% and related products by 25.8% in October."

More importantly, shipments of many products have recovered, especially for those affected by the trade war such as computers and parts, which bounced back to record growth for the first time in 13 months, nearly equalling their value before the US-China tariff measures began in September 2018.

Exports of electric circuits have also expanded for two straight months. In terms of markets, exports to the US, Japan and Taiwan maintained positive momentum, Ms Pimchanok said.

Imports registered a year-on-year drop of 7.6% last month to $20.3 billion. Thailand recorded a trade surplus of $507 million in October.

Ms Pimchanok said that for the first 10 months of 2019, many new star products have grown constantly, such as motorcycles and parts, furniture and parts, and kitchenware and household appliances. This indicates that exports are resilient to external shocks and performed well in terms of product diversification, slightly improving export share in some markets, she said.

The Commerce Ministry wants to expedite exports of major agricultural products to benefit local farmers in many areas.

Thai and Turkish companies signed a memorandum of understanding, led by Commerce Minister Jurin Laksanawisit during a trade promotion trip to Turkey last week, that will add a further 15 billion baht to exports of rubber, rice, cassava and food products in the near future, Ms Pimchanok said.

Ms Pimchanok said strengthening partnerships with existing importers is also of great importance to exporters in parallel with expanding market share for potential products. The ministry aims to complete the Thailand-Turkey FTA by early 2020 and prepare for other FTA talks such as with the EU.

Visit Limlurcha, vice-chairman of the Thai National Shippers' Council, said October's results were lower than projected, as exporters previously hoped that purchase orders would flood in during October.

Diesel may be capped at B30, but not truckers' B25, says minister