Rama IV Road will soon have a different skyline, with four mixed-use projects set to open within five years. (Photo by Patipat Janthong)

The developers behind One Bangkok, the 120-billion-baht megaproject being built next to Lumpini Park, are placing big bets on standing out in an area seeing a notable uptick in mixed-use development.

Constructed on a 167,000-square-metre plot on the corner of Rama IV and Wireless roads, One Bangkok strives to stand out with art-heavy concepts and towering skyscrapers, one of which will be the city's tallest.

"I don't want to make some glossy building that looks like it could be anywhere in the world," said Su Lin Soon, chief executive of One Bangkok, a Singapore real estate developer who moved to Bangkok to spearhead the project.

The joint venture between TCC Assets and Frasers Property Holdings Thailand will include five office buildings, five luxury hotels (including the first Ritz Carlton in Bangkok), three residential towers and about 180,000 sq m in total for four retail zones, dispersed throughout the buildings.

The project is scheduled to be 70% complete by 2023, while the remaining buildings, which includes its tallest multi-use tower containing offices and a hotel, will open in 2026.

“We will not bring all five buildings into the market at once and then ask where the demand is,”

"We are phasing the buildings in gradually while maintaining the possibility of opening buildings earlier if demand suddenly shoots up. There's a lot of potential for Asean countries becoming the fourth largest economic bloc by 2030 and this could affect us by increasing demand, but there could also be a global recession so we need to phase in the buildings at the right pace."

The complete development is projected to host 500 corporations with 50,000 employees, alongside 1,100 hotel rooms and 3,000 residents.

One Bangkok will provide walking trails, concert venues, activities and event space for this "captive population" with a discernible strategy of fostering a contained community.

Though she has overseen many large projects in Singapore, this is by far the biggest challenge of Ms Soon's career, one she hopes will create an indelible mark on the city.

To set One Bangkok apart, art and culture are at the forefront of the development plan, with one sculpture being constructed from the mast of the old radio building preserved in close collaboration with the Fine Arts Department during construction. Wireless Road was so named because it was the site of the first radio station in Bangkok, a history Ms Soon wants woven into the design of the development district.

"Thailand is steeped in art and culture, making it one of the best tourism destinations in the world," she said.

"While we are building the One Bangkok district to global standards, we also need to make it a Thai product, tying art and culture into the presentation of the site as well as the heritage of the area to make something truly one of a kind."

ONE OF A KIND

The One Bangkok team won't just tell you their project is unique, they'll show you.

They constructed a de facto museum devoted to the development right next to the construction area to woo potential big-ticket tenants and, of course, the media.

In a large circular room a video projection describes the history of the area, first farmland then a radio station, then the future site of Bangkok's most expensive mixed-use development.

The floor opens up to reveal a scale model of what will be One Bangkok. 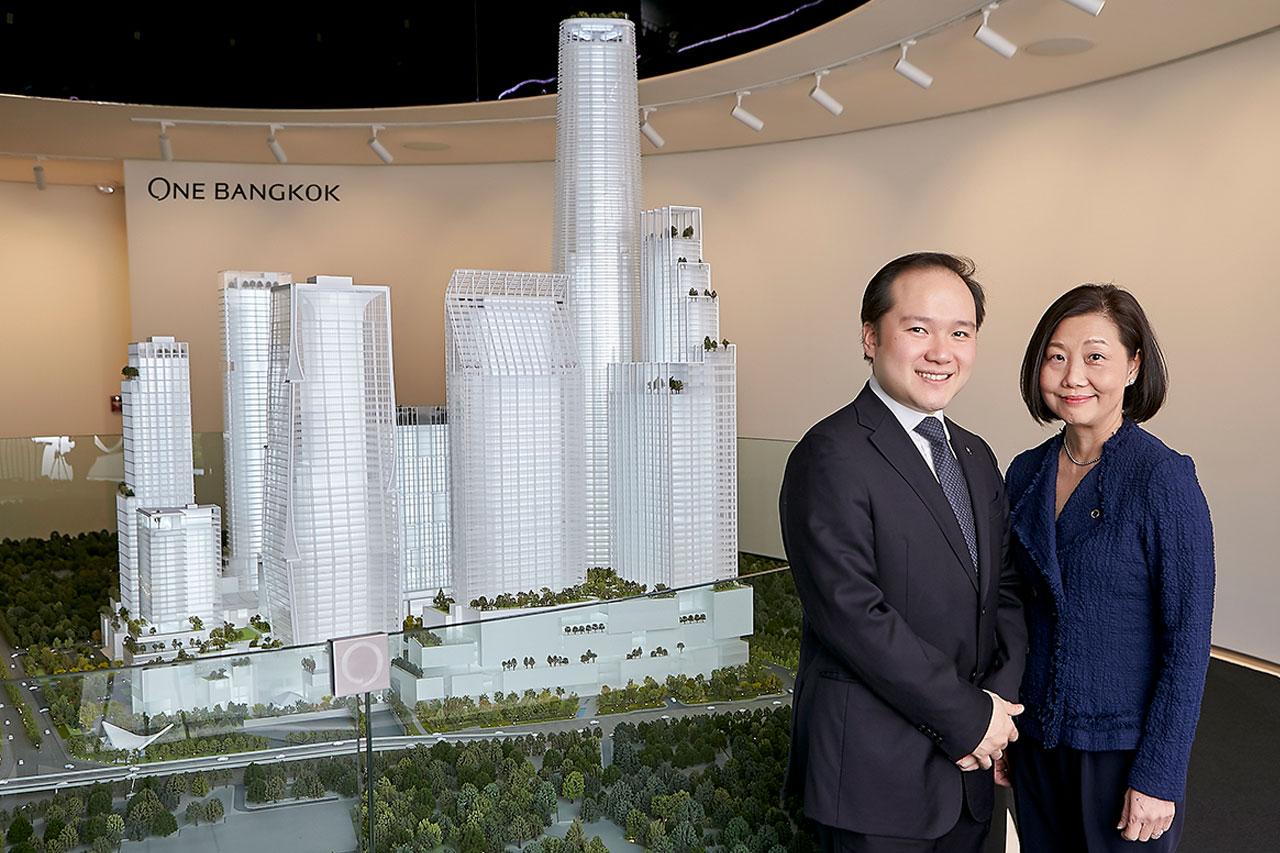 The museum also displays artwork inspired by the construction workers on the project, the history of the lot, the park and the city. Guests are given a signature tea designed specially for visitors to the One Bangkok construction.

However, all this curated individuality does not mask that the once underutilised neighbourhood is getting a bit more crowded by the sharp uptick in development. TCC Assets and Frasers will open another mixed use development -- the PARQ on Rama IV -- not far from One Bangkok, while another TCC Group subsidiary recently opened Samyan Mitrtown on the same road.

Just a few blocks away from One Bangkok, Central Group is constructing their own mixed-use project, Dusit Central Park, on the site of the old Dusit Thani Hotel.

The name Dusit Central Park is a reference to New York's Central Park, where park-view addresses are some of the most sought-after and prestigious in the city. Ms Soon wants One Bangkok addresses to be of equal weight and significance in Bangkok and is using the allure of the park view as a main selling points, followed by convenient access to the MRT subway line.

Retail will be key to making One Bangkok a destination not just for office workers and residents, but the Bangkok populace at large.

Ms Soon wants to lean in to the growing e-commerce trend by making retail spaces where brands can showcase their products and raise consumer awareness.

"I'm not just building a big box for retail. Instead I'm taking advantage of the whole district, incorporating components for hotels, offices and residences," she said. "This means following the latest trends that show retail needs to be omni-channel and embrace online channels."

The planned retail areas will accommodate larger stores to act as flagship stores or showrooms for large international brands in line with the popular appeal of an Apple Store.

"We believe very strongly in the One Bangkok brand and the ability to draw multinational corporations, so what better place to showcase the products of these companies?" Ms Soon said.

"We are not building smart just to be smart, or making everything high tech without purpose," she said. "We want to use technology that will benefit the everyday lives of the residents and workers."

She said One Bangkok incorporates a centralised electricity unit that helps reduce energy usage by 25% compared with buildings that are powered individually.

Different buildings have different peak times -- office buildings use more energy during the day, while residences use more in the evening. A smart grid will allow them to allocate power more efficiently.

"That is what One Bangkok is trying to offer: everything within the district. You're close to the train, the outdoors, retail and restaurants. You can have five meetings a day because so many businesses are so close."