Bangkok is one of the most expensive cities in the world, largely because of the strong baht, according a survey by ECA International. (Bangkok Post photo)

Bangkok has leapt 43 places and entered the top 50 most expensive locations in the world for the first time, largely because of the strong baht, according a survey by ECA International, which advises on management and compensation for employees being assigned around the world.

"Bangkok, long seen as a cheap destination for holidaymakers and expatriates alike, has seen a huge jump in its rankings, moving the most out of all Asian cities surveyed. This is largely the result of the strong baht," said Lee Quane, regional director for Asia with ECA International.

Bangkok has moved up 75 places in the last two years and now ranks 47th in the annual ECA Cost of Living survey, while Chiang Mai moved up 56 places in the same period, he said.

ECA International has been researching the cost of living for more than 45 years. It carries out two main surveys per year to help companies calculate cost of living allowances so their employees' spending power is protected while on international assignment.

The surveys compare a basket of like-for-like consumer goods and services commonly purchased by assignees in over 480 locations worldwide. 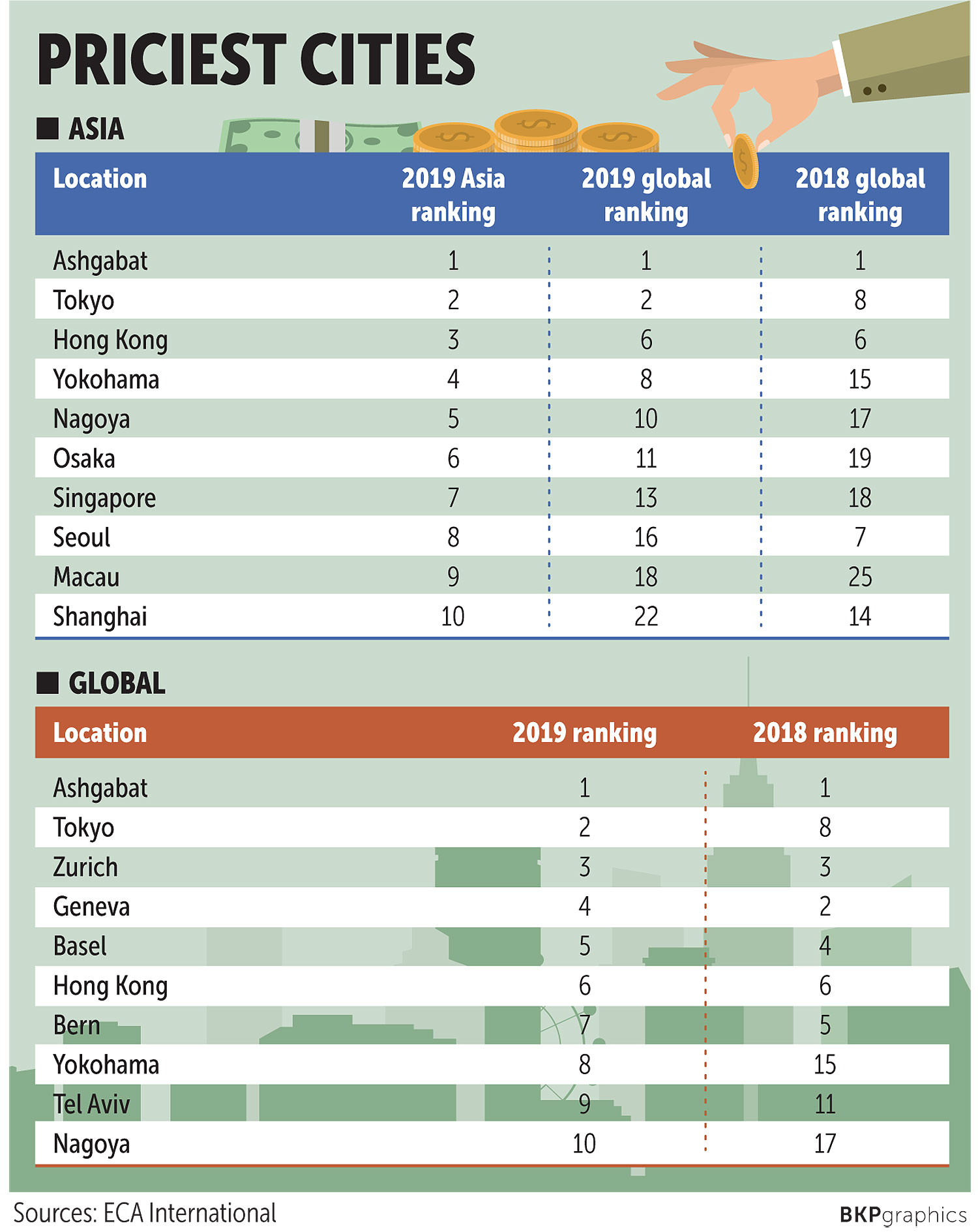 Certain living costs, such as accommodation rental, utilities, car purchases and school fees are usually covered by separate allowances. Data for these costs are collected separately and are not included in ECA's cost of living basket.

Although it fell to third place in Asia, behind Ashgabat and Tokyo, Hong Kong's place in the rankings has remained stable this year as the sixth most expensive location in the world for expatriates.

"Despite the ongoing socio-political upheavals and the economy being in recession, we have yet to see a real impact on the cost of living in the city," said Mr Quane.

"Inflation remains high relative to many other locations that occupy the upper reaches of our rankings. Hong Kong has only been overtaken by Tokyo because of the strong performance of the Japanese yen throughout 2019, which moved many Japanese cities up the rankings.

"Furthermore, we expect prices in Japan to increase further because of the recent increase in consumption tax, while next year's Olympics in Tokyo are likely to have further inflationary effects."

"Despite relatively low inflation and weakening global trade growth, Singapore has risen five places thanks to the continued strength of the Singapore dollar. Singapore is now more expensive for expatriates than Seoul and Shanghai," he said.

In spite of recent price rises in many Chinese cities, which can be partly attributed to the impact of Asian swine flu on meat prices, many Chinese cities surveyed by ECA have fallen slightly in the rankings. This is mainly because of the weakness of the yuan against major currencies in the past 12 months.

"While pork prices have increased significantly in the past 12 months, the impact on the cost of living for expatriates in Chinese cities versus their peers elsewhere has been muted by the weakness of the currency," said Mr Quane.

Ashgabat, the capital of Turkmenistan, remains the most expensive city in the world for expats for a second year running. The city rocketed up from 146th place in 2017 and has remained in the top spot ever since, thanks to a combination of high inflation and a black market currency rate far weaker than the official exchange rate.

This makes purchases particularly expensive for expatriates in their home currency unless they can access the illegal black market exchange rate.

"Future living costs in Turkmenistan could potentially follow the same trajectory that we are currently seeing in Angola," said Mr Quane.

"The once-booming oil-based economy of the Angolan capital, Luanda, which topped the rankings in the 2017 survey, has continued to fall, dropping 50 places to 92nd place."

Middle Eastern countries have generally continued to see an increase in the cost of living because of the strength of their currencies -- many of which are tied to the US dollar. Tel Aviv entered the top 10 for the first time in ninth place and Jerusalem was 12th.

Apart from Swiss cities that continue to dominate the top 10 worldwide, most European cities have fallen in the rankings since last year. Continued uncertainty over Brexit has seen London drop to 140th place -- the lowest position it has occupied since ECA began producing its Cost of Living rankings in 2005.

Many European cities have dropped out of the top 100 since last year.

"With the euro-zone's largest economy in the dumps, most euro-zone countries have seen a slight drop in the cost of living for expatriates because of the relative weakness of the euro," he said.

US cities have risen across the board for the second year as the dollar continues its strong run.