The government is keen to push forward Thailand's automotive industry to develop into a regional hub for electric vehicles (EVs). The auto sector has been an integral part of the economy for over 60 years, with a shipment value totalling almost 1 trillion baht annually. 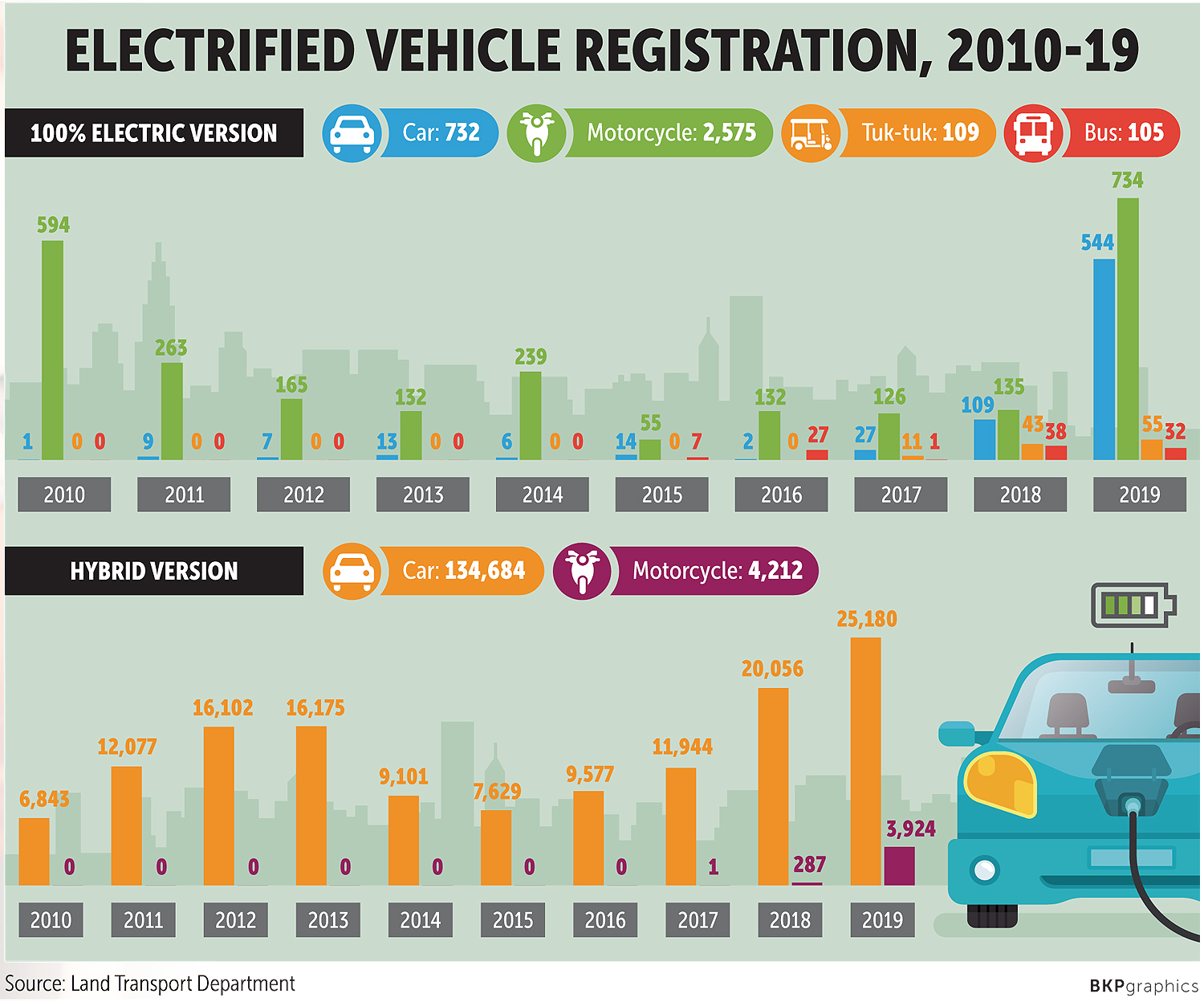 Thailand is not only a designated destination for vehicle assembly lines from well-known car makers, but it's also a major supply chain for car and motorcycle components.

The two flagship products of the Thai automotive industry are pickups and eco-cars. These models are, however, classified as conventional vehicles.

The Board of Investment (BoI) offers promotional privileges, including tax holidays of 5-8 years and import duty exemptions for cars and machinery.

The promotion includes passenger cars, pickups and buses with different rates of privileges based on production technology.

The application period for the scheme expired in 2018. After almost a year, the BoI is still considering approving each application, unlike the eco-car scheme in 2013-14 when the BoI cleared all 10 applicants within a year. 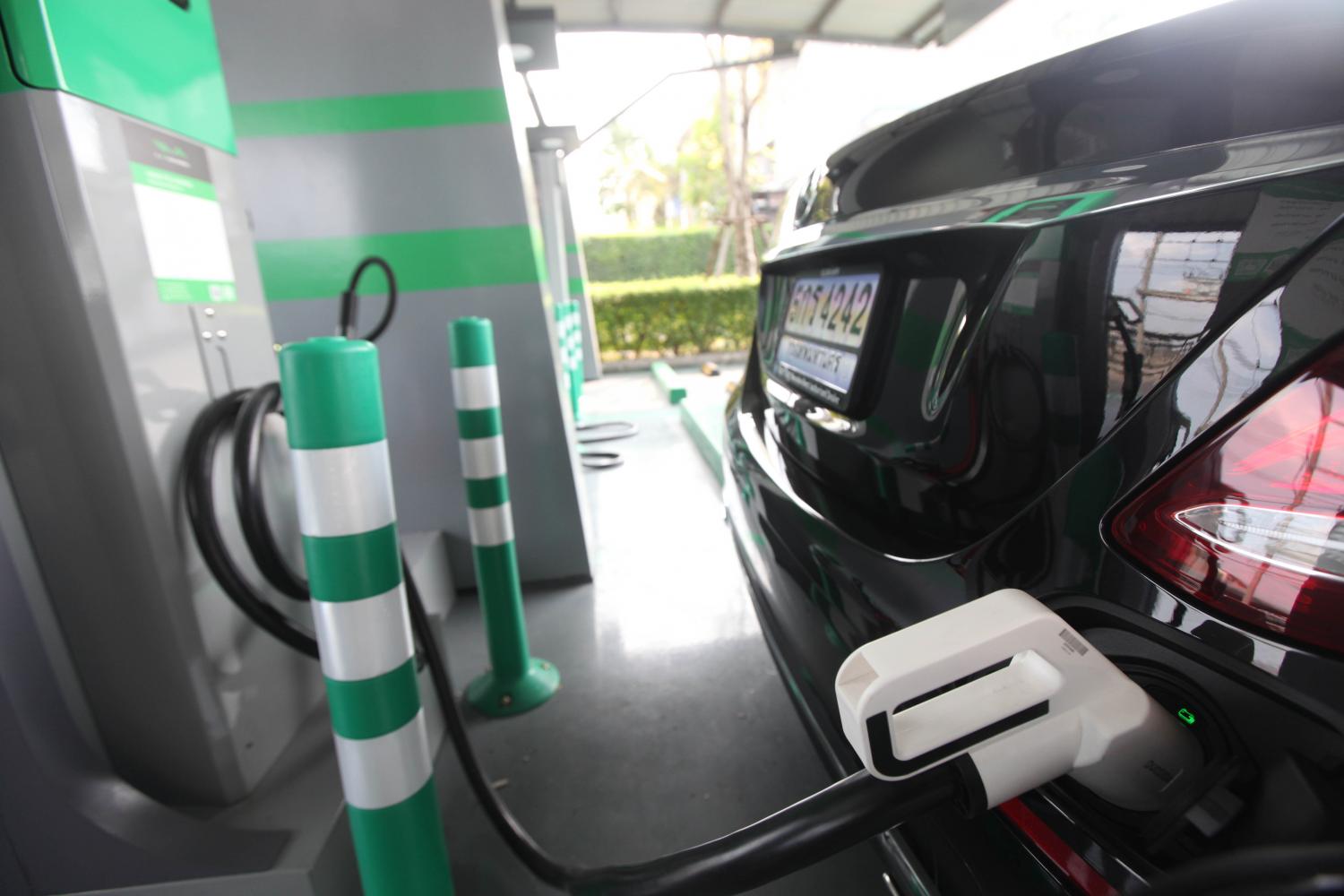 An EV gets charged at a charging station at the Crystal Design Centre on Ekamai-Ram Intra expressway in Bang Kapi. Thiti Wannamontha

Hybrid and plug-in hybrid EVs still use both fuel and electricity, so development of those two EV versions can begin immediately. But the slow approach is to lay the foundation for battery EVs, as this technology needs many vital components such as lithium-ion batteries, traction motors, battery management systems and DC-to-DC converters.

Meanwhile, the local supply chain in the automotive sector is not strong enough to support the development of battery EVs.

Ms Duangjai said the agency is confident that battery EVs will be sold commercially within two years.

"The EV policy requires each company to begin manufacturing battery EVs within two years after the government approves their applications," she said. "The government itself is implementing many policies to support future EV possibilities."

Only Toyota and Honda have begun their manufacturing facilities, with new hybrid cars launched locally during 2018-19.

Two German car makers, Mercedes-Benz and BMW, have carried out these investment privileges.

FOMM Asia Co was the first company to be granted approval under the battery EV scheme with a project value of 716 million baht. The company began its assembly line in early 2019 to make compact EVs.

"The BoI is still in the process of considering applications for EVs because some companies want to submit additional information and documents, such as Toyota," she said.

Industry Minister Suriya Jungrungreangkit said the ministry has assigned the Office of Industrial Economics to study new investment incentives for electric motorcycles, such as tax reduction to attract manufacturers from China and Taiwan.

"They have expertise in electric bikes," he said. "Once they begin investing locally, it will bring electric bike prices close to those of conventional motorcycles."

Under the current EV scheme, there is no privilege for local motorcycle makers.

"In the meantime, the ministry wants to lay the foundation for electric bikes because battery EVs need more time to be sold widely in this market, while motorcycles are cheaper and more affordable," Mr Suriya said. "If the ministry can push forward this investment promotion, I will hold roadshows in China and Taiwan to attract bike makers to invest in Thailand." 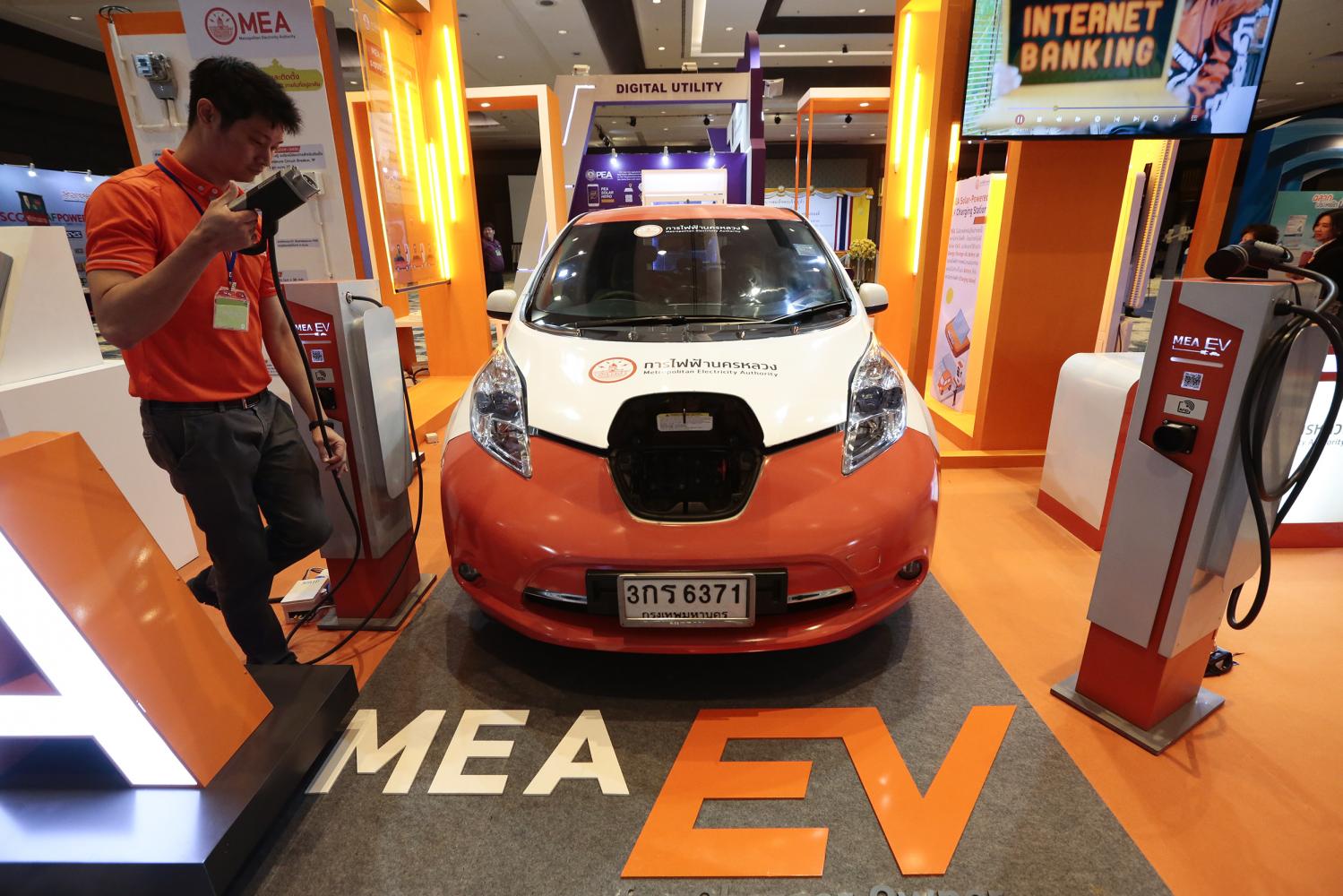 The Metropolitan Electricity Authority's charging stations for EVs were on display at the National Engineering 2019 event at Impact Forum. Patipat Janthong

Despite a series of BoI approvals, Mercedes-Benz Thailand had to postpone the introduction of the EQC as the first battery EV sold in Thailand from a 2019 schedule because the board has yet to approve its plan to import 500-600 EQCs.

Under the BoI incentives, battery EV applications can import completely built-up (CBU) cars without facing an import duty to test the EV market within two years after the BoI issues certificates for promoted projects. Car makers can then start their assembly lines locally.

"The BoI allows us to import a small volume, which is not large enough to market in Thailand," said Roland Folger, president and chief executive of Mercedes-Benz Thailand. "We have been investing heavily to start the battery EV market in Thailand, while our 34 dealers have to bring their staff for training in a bid to support this new EV business, such as after-sales services and charging stations."

Mr Folger said Mercedes-Benz wants to support the EV policy to bring the EQC to be sold in Thailand at similar prices to both imported and locally made cars.

"We have made major investments to implement the electrification policy, including the assembly line of batteries for plug-in hybrid EVs at our Samut Prakan plant," he said.

That facility has begun operating under Mercedes-Benz's local partner, Thonburi Automotive Assembly Plant. The German car maker made an investment of €100 million in the battery facility.

Thailand is the sixth battery plant for the Daimler group worldwide, along with three plants in Germany and one each in the US and China.

"But we will not give up pushing forward this plan," Mr Folger said. "Mercedes-Benz still wants to work with the BoI in order to carry out this plan."

Ms Duangjai said Mercedes-Benz has yet to submit applications to import CBU cars, while the agency will consider the import volume based on the government's requirements.

The import volume will be considered from an average volume of manufacturing in the first two years. The BoI will calculate the total based on commercial plans and real investment, excluding land cost and budget, using local EV parts. 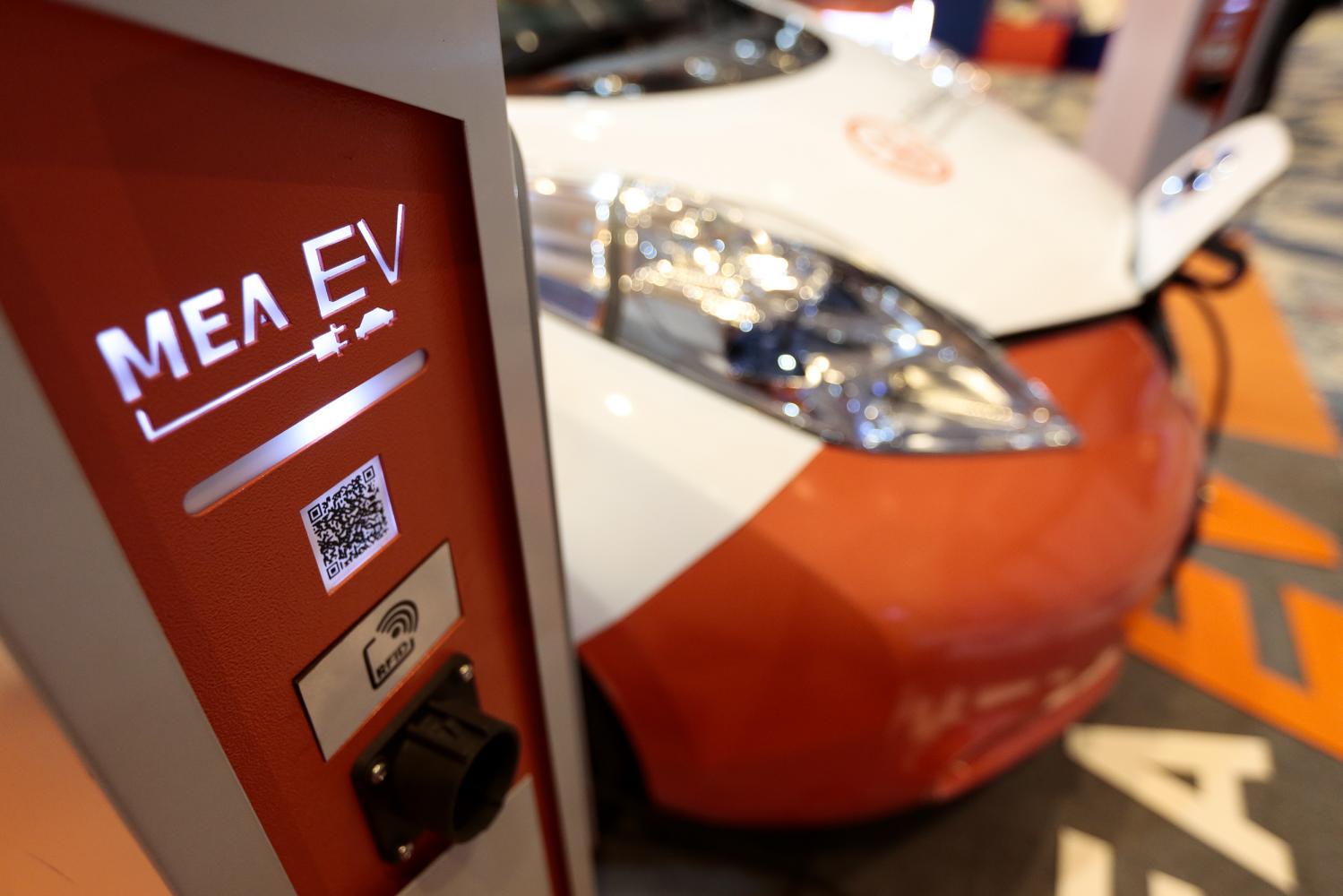 The Board of Investment says it's still in the process of considering applications for some EV projects because companies want to submit additional information and documents. Patipat Janthong

The Excise Department is poised to charge up to 1,000 baht per EV for batteries to finance the tracking of battery demolition or recycling, with refunds paid after car owners return batteries to car distributors.

The levy on EV batteries depends on battery size and whether an act is needed for a fund to support and develop EVs, said Patchara Anuntasilpa, director-general of the department.

The department plans to propose establishing a fund for battery management of EVs to seek financing to track the recycling or destruction of EV batteries, he said.

According to the draft act, EV buyers are subject to a battery surcharge that will be directed to the fund as working capital. The fee will be repaid to car owners after the batteries are returned.

The time frame for the draft act will take effect from 2021.

Mr Patchara said the fund's task is to track whether EV batteries are destroyed or recycled in an appropriate manner, while car makers will be responsible for demolishing or recycling batteries.

Given the lack of EV battery recycling and destruction facilities in Thailand, all EV batteries must be shipped overseas to be disposed of.

At present, Toyota is the only car maker to invest in a battery life cycle management plant in Chachoengsao, the first facility outside Japan, to circulate batteries of hybrid cars sold in Thailand.

Ramesh Narasimhan, president of Nissan Motor Thailand, said that once the 1,000-baht levy collection under the plan takes effect, the taxation will not impact EV prices or car makers' business plans.

"The levy value is still small compared to the actual price of battery EVs, so customers can afford it," Mr Narasimhan said. "Nissan has its battery recycling management in Japan."

Nissan was the first brand in the mass-market segment to import battery EVs locally, starting with the Leaf model.

"For battery EVs, Nissan does not expect to sell as many as EVs, as the Thai market needs to experience more of this electrification technology before widespread adoption."