Falling water levels deliver a taste of things to come

Saltier tap water in parts of Bangkok is a harbinger of the much-feared drought, with the brackish taste stemming from how the Chao Phraya River's level has become too low to keep out seawater.

With the growing ominous signs, this year's drought is expected to be the worst in four decades, says the Thai Meteorological Department.

According to the TMD, this year's drought will be caused by the same weather pattern that resulted in lower-than-average precipitation falling across Thailand last year.

The central region will be hit the hardest, especially the 22 provinces along the Chao Phraya basin. Nakhon Sawan, with over 70,000 rai of rice fields, and Kamphaeng Phet are likely to suffer the most from the drought.

Despite a slew of short-term measures to deal with the water shortage, including the deployment of extra tanks to drought-hit areas and the drilling of wells for groundwater extraction, the anticipated drought will more than likely rattle agricultural and industrial sectors that largely depend on water supplies for production. 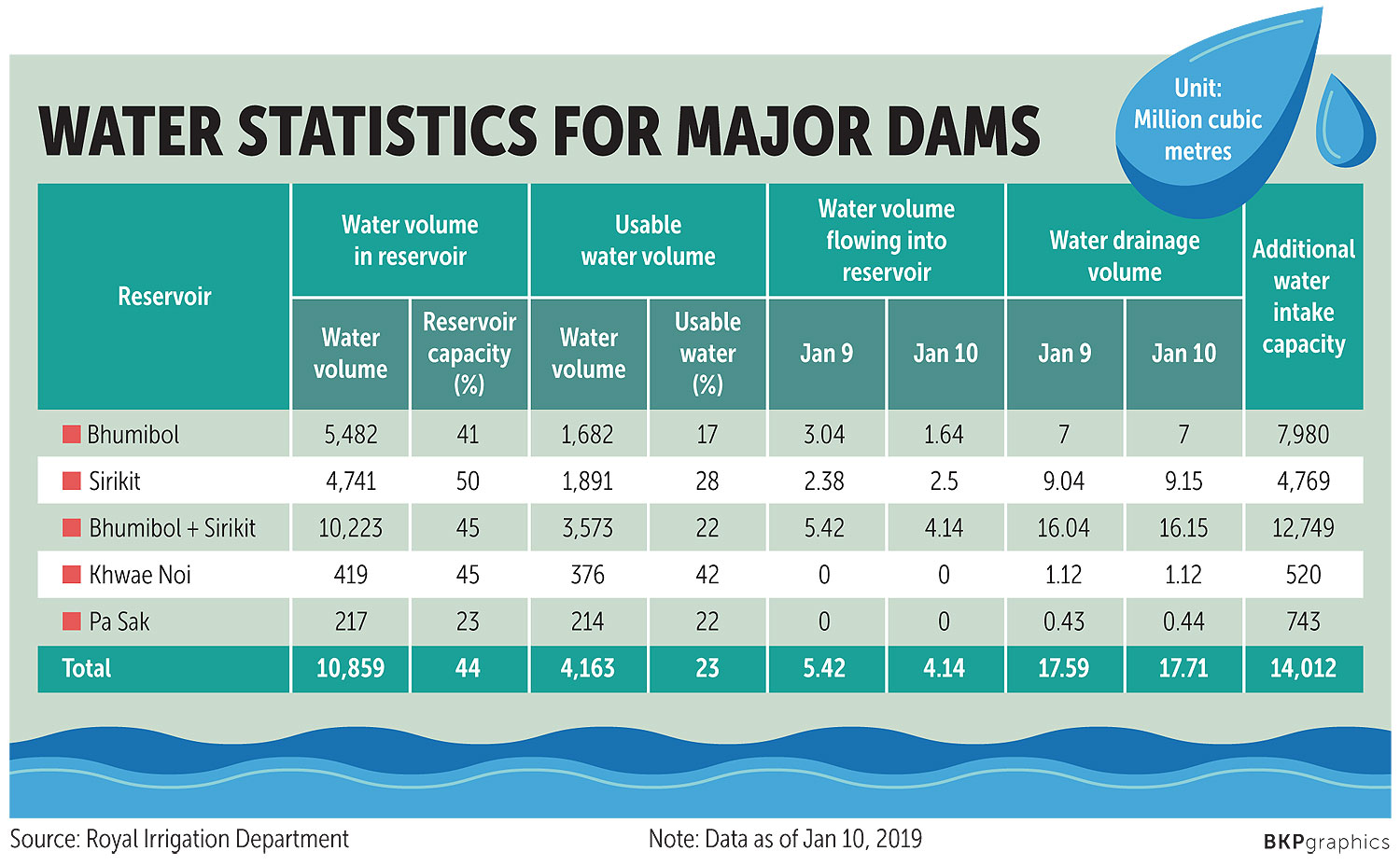 The department itself is now preparing measures such as offering specially discounted products through 102,000 Thong Fah (Blue Flag) low-priced shops nationwide to alleviate the hardship of consumers who are likely to face rising prices for farm products due to the anticipated drought.

According to Mr Whichai, who recently chaired a meeting of the subcommittee handling reference prices for the state's rice price guarantees, the country's overall annual paddy production for both the main and second crops is forecast at 27-28 million tonnes in the 2019-20 season, weighed down by a drop in production for the second crop because of flooding and drought.

Paddy production for the second crop is forecast to fall by more than 50% in the 2019-20 season to 3.4-3.5 million tonnes, from 7.75 million tonnes the previous season, due to drought and inadequate water supply from dams.

Because of lower production, the prices of hom mali, white and glutinous paddy are likely to increase, Mr Whichai said.

Vegetables and fruits that require large amounts of water, such as parsley and limes, could also see an impact.

The department is working with the Agriculture and Cooperatives Ministry to promote other crops that require less water.

Mr Whichai said the dry spell will not only affect the growth rate of pigs, but endanger their lives as well.

In addition, widespread swine virus in China, Laos and Vietnam has drawn strong demand for imported pork, he said, adding that Thailand has shipped 6,000-8,000 pigs per day to the three countries.

Ex-farm prices are now quoted at 75 baht per kg.

Especially last year, areas along the Chao Phraya River, which flows into the Gulf of Thailand, experienced inadequate water supply and used more water than the annual allocation planned by the Royal Irrigation Department (RID), resulting in the saltwater intrusion into the Chao Phraya River that affects the quality of water both for consumption and agricultural purposes.

According to Mr Chalermchai, the ministry is now revving up construction of an additional 421 water storage facilities covering new large, medium-sized and small-scale water source projects, including kaem ling water catchment areas, in the fight against the looming water shortage.

The new storage facilities will increase water capacity by 942 million cubic metres, he said, adding that up to 1.23 million rai of new irrigation areas will benefit from the move.

In the long run, the government must expand water storage capacity because the country cannot rely on existing facilities.

Up to 40,000 ponds, each with a capacity of 1,260 cubic metres, will be created for farmers working in irrigation areas in a bid to "delay aridity", according to Mr Chalermchai.

Artificial rainmaking operations are also being planned to cover 25 river basins in 77 provinces. The operations are expected to benefit 230 million rai of farmland.

Of the total water allocation, 2.3 billion cubic metres will be slated for consumption, 7.006 billion for ecological conservation, 10.54 billion as water reserves until the beginning of the rainy season (May-July 2020), 7.874 billion for farming during the dry season and 519 million for industry. 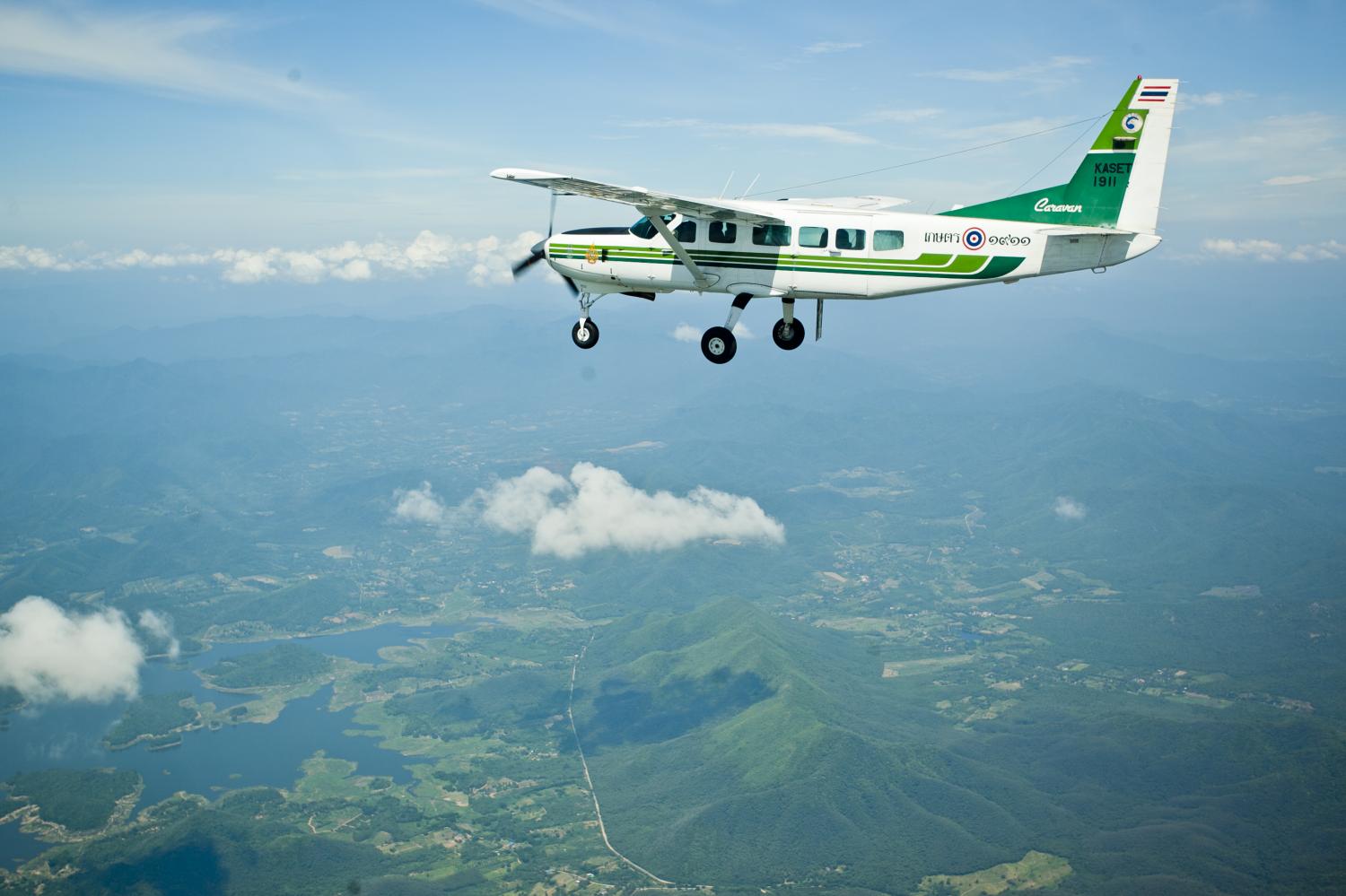 Supant Mongkolsuthree, chairman of the Federation of Thai Industries (FTI), said the private sector is concerned about the adverse impact of drought this year.

The agricultural sector is expected to suffer the most from the severe conditions.

"It is the backbone sector to mobilise the country's GDP with crops, livestock and food products," Mr Supant said. "Thailand has many commodities; rice, rubber, palm oil. The drought situation will decrease farmer's incomes and purchasing power."

The industrial sector is also set to suffer from the drought, but many factories and industrial estates have formulated backup plans for internal water management and disaster crisis management.

"In the big picture, the country's food and processed food industries will be affected because of this situation," Mr Supant said. "These sectors contribute much to the country's economy in terms of domestic consumption and exports."

EW is a water supplier for industrial operators in Thailand's eastern region.

"The company has prepared for water reserves for factories amid the drought," Mr Jirayut said. "They will not stop their operations. EW plans to upgrade pump stations from Bang Pakong River in Chachoengsao province to increase water volume for industrial estates there."

The company is building a connection of water pipelines in Rayong province to supply the utility from Prasae and Khlong Yai reservoirs to Nong Pla Lai reservoir, Mr Jirayut said.

"Both industrial estates have more than 1,000 factories that Amata is supplying with water utilities," he said. "Amata has water reservoirs to serve them, and we have confidence in water reserves to supply roughly 18 months amid the drought."

Piyaman Tejapaibul, managing director of The Regent Group, said the tourism industry is not suffering from drought by comparison with the agricultural sector. Most standard hotels have applied water-saving measures to reduce operating costs.

Normal practices, such as replacing all sanitary wares for an eco-friendly model and reuse of water after treatment for hotel gardening, have been conducted regularly, Mrs Piyaman said.

For example, The Regent Cha-Am Beach Resort, which spans 100 rai, has ponds that can supply water for consumption.

The bigger concern of hoteliers situated along the beach is coastal erosion from rising sea levels. If this situation persists, tourists will shift their travel plans to other places.

This may be the case in Cha-am already. According to an arrival survey, Phetchaburi province has dropped from fourth to the sixth most popular destination in Thailand. One of the contributing causes is deteriorating scenery.

Naphaporn Bodiratnangkura, managing director of Sampatilert Co Ltd and Nai Lert Group, said Park Nai Lert in the centre of Bangkok has to implement water-saving methods to counter a shortage of water supply.

As the property owns a vast green space of 20 rai, the natural pond within the site is used for watering the garden once a day, except during the rainy season when the process is skipped an plants absorb natural groundwater. To preserve the environment and consumption, the hotel also has an in-house water treatment system.