Overreliance on the China market poses a host of risks

The interconnectedness between the economies of Thailand and China rose more than 10 times between 1985 and 2013, with bilateral trade, investment and tourism identified as the main beneficiaries from higher interconnectedness, according to the Thailand Development Research Institute (TDRI).

"If China catches a cold, Thailand will also catch the same bug," said TDRI president Somkiat Tangkitvanich. "Many Thai businesses have been relying on Chinese [capital]. Too much dependence will put Thailand at risk."

Among several real sectors of the Thai economy, property is visibly highlighted as one of the much-publicised segments when it comes to identifying Chinese investment in Thailand.

But things have taken a turn as buyers from mainland China have slowed their condo purchases in Bangkok due to the US-China trade dispute, the strong baht, overpriced units and a supply glut.

Buyers from China and Hong Kong make up about 40% of total foreign purchases of Thai condo units. This means that the local property sector will feel the pinch if Chinese buyers do not make down payments because of a slowdown in China's economy, Mr Somkiat said.

"Businesses that have been heavily depending on Chinese [capital] will need to formulate their Plan B by diversifying into new customers from Asean and other countries," he said. "This plan will help businesses to be prepared and prevent a hiccup in doing business and development in case China's economy experiences a problem." 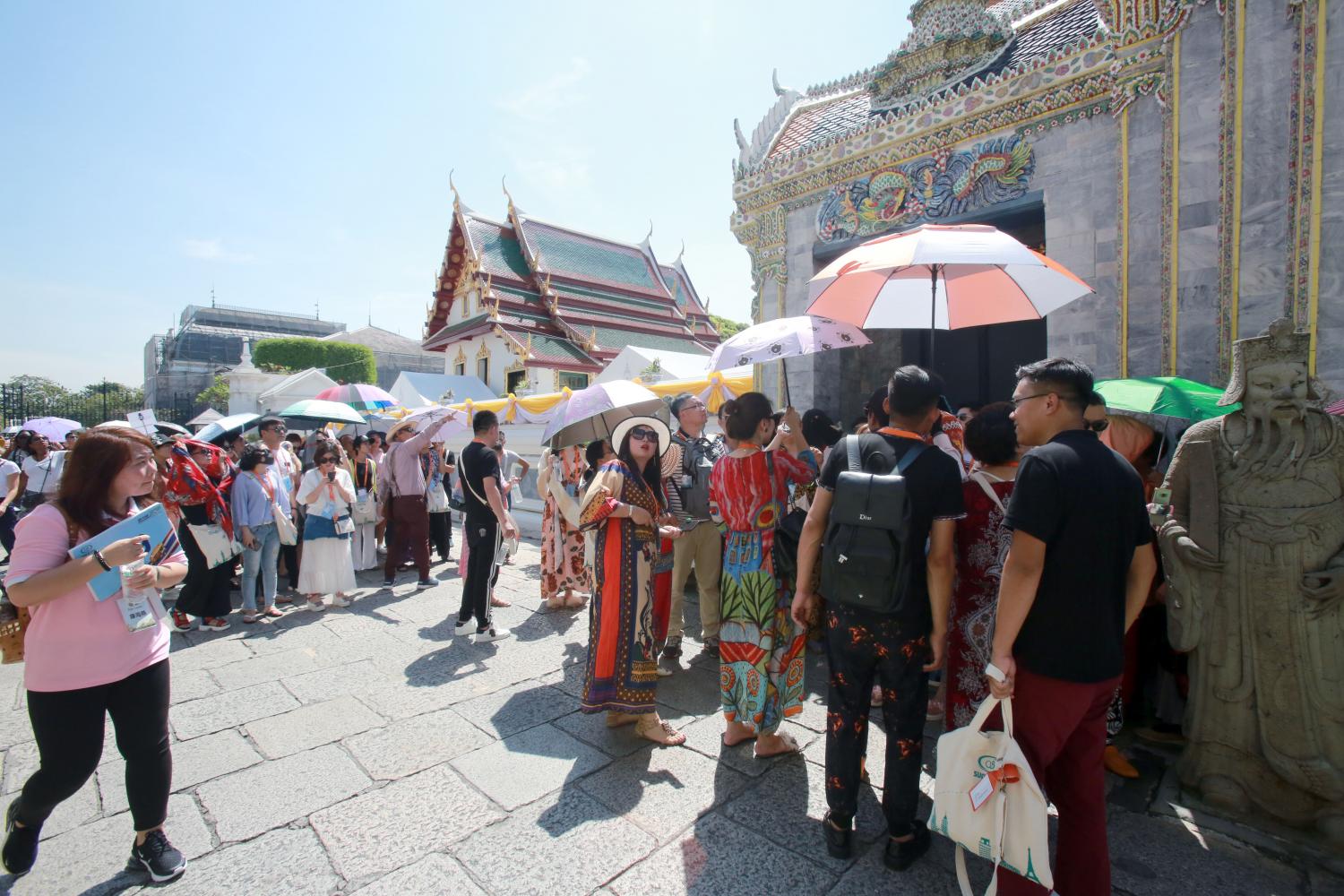 For the country's direct investment, Chinese companies applied for Board of Investment (BoI) privileges in 2019 worth 262 billion baht, an all-time high for that country.

With these statistics, the Chinese value also surpassed Japanese applications, valued at 73.1 billion baht in 2019. Japan has ranked as the largest investor in Thailand for the past several years.

It's a clear sign that Chinese companies are broadening their country's economic power to Thailand.

"The US-China trade war is a key reason for the huge relocation of production facilities and operations, and Chinese companies favour Southeast Asia, connecting it with China's Belt and Road Initiative," Ms Jareeporn said. "Over the past 10 years, China's government invested heavily in megaprojects, resulting in high growth of GDP and people demand, so Chinese companies have to diversify their operations."

Aat Pisanwanich, director of the Center for International Trade Studies at the University of the Thai Chamber of Commerce, said China's growing influence is a bit worrisome, with the government urged to improve regulations to supervise foreign investments and protect Thai investors.

The government should not be too open to Chinese investment, or any other foreign investor, he said, since this may eventually cause Thai people to lose their occupations.

"Chinese businesses and investors are abundant now, not only in trade but also in logistics, services and education," Mr Aat said. "It is scary if the government ignores this threat."

According to Mr Aat, doing business in Thailand is much easier now. He said the current business registration regime has no idea whether those who register to run a company in Thailand are true entrepreneurs.

In reality, there are many nominees and proxy businesses in Thailand, but nobody has seriously inspected or investigated whether the businesses registered at the Commerce Ministry are owned by foreigners.

"Foreign direct investment can help increase employment in the short term," Mr Aat said. "But in the medium term, domestic supply chains, be it agriculture, industry or education, will be controlled by foreign businesses.

"Higher foreign direct investment may boost the country's economic growth in the short term, but such growth is not sustainable because Thai people cannot develop their own know-how."

Mr Aat proposed that the government review the Foreign Business Act and the business registration law to check whether foreigners are the real investors who have a business background and expertise.

The Chinese market is the biggest source of Thailand tourism. At its peak, it accounted for one-fourth of the total international market.

"Because of their disproportionate clout, Thai tourism immediately feels the impact when faced with unpredictable accidents," said Vichit Prakobgosol, president of the Association of Thai Travel Agents (Atta).

The notorious boat accident in Phuket in 2018 was a bitter lesson for businesses, as that year the growth in this market shrank to single digits in contrast to many years before, especially in 2015 when the sector witnessed impressive growth of 71%.

To counterbalance Chinese domination, Mr Vichit suggests that India and Southeast Asia, which have a comparable combined population of 1.9 billion, should be the next markets the sector focuses on.

But it's still necessary to cling to Chinese travellers, as the advantage of this market is recurring revenue, attributed to year-round travel and how Thailand is always top of mind for short-haul destinations.

Moreover, China's GDP growth of 6% year-on-year strengthens the demand of the middle class, especially the younger generation and first-time visitors who can afford to travel abroad.

He believes that at least 30% of total revenue would leak to mainland China, as about 90% of Thai tour operators are under the influence of Chinese businessmen via shares and investment. 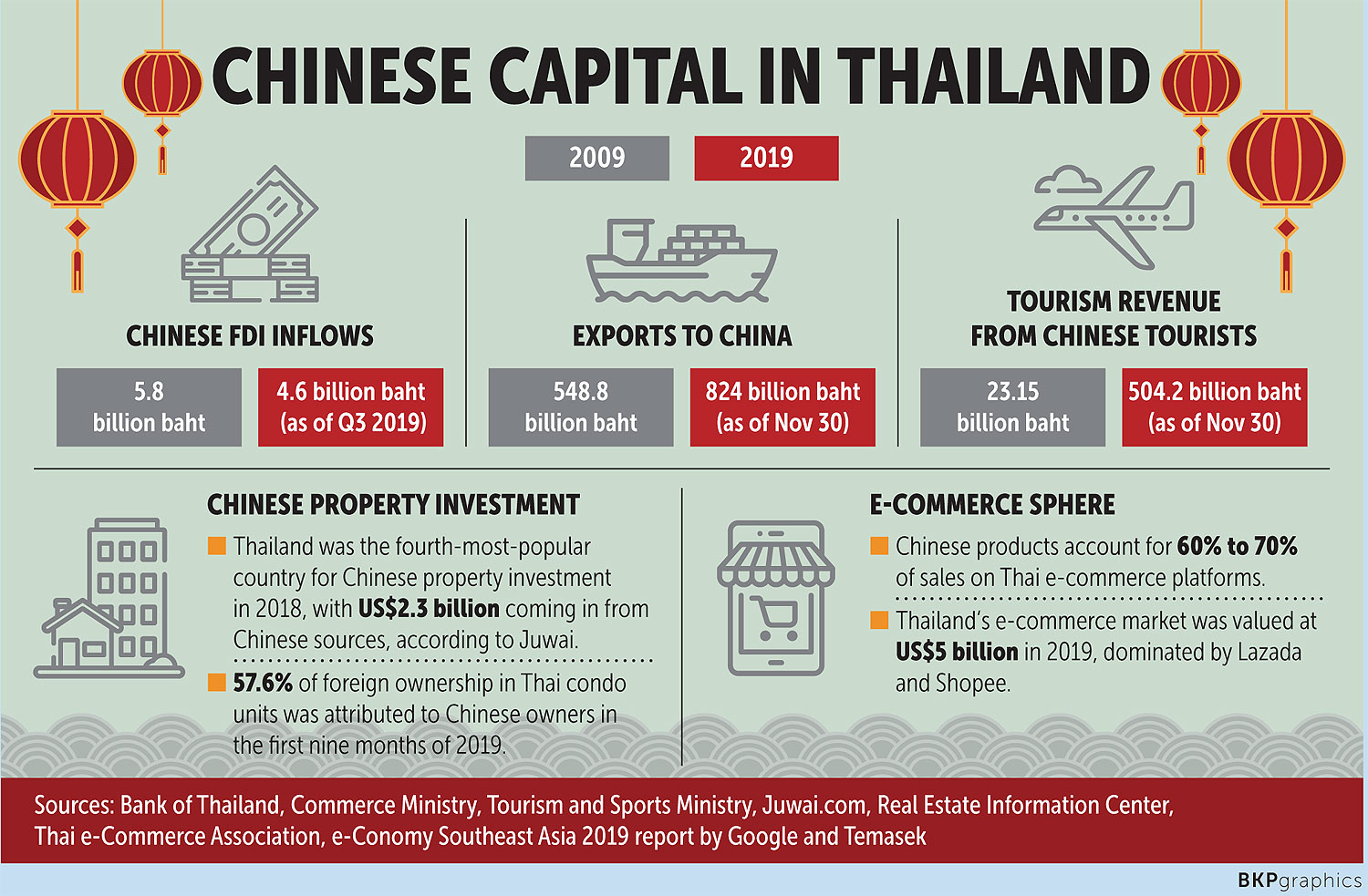 As the number of Chinese buyers in the Thai condo market is on the rise and most of them are for rental purposes, short-term rental regulations could help avoid problems with unit owners.

A source who asked not to be named said the rules can help unit owners feel more secure in the same building where some units are rented out on a daily basis.

"Many unit owners feel insecure and unhappy when new faces of daily-rent tenants appear every day, some guests don't know how to behave when have to share space with the other," the source said.

Last May, a Facebook user posted a complaint about the influx of Chinese tourists in his condominium, particularly during a long holiday festival like Songkran when large groups would step down from a tour bus and flock into the building.

The source said such incidents would continue to happen if no regulations were put in place.

In Japan, the government in June 2018 enacted a law called minpaku, requiring people who want to rent out properties to register with the land ministry.

A minpaku unit can only be operated for up to 180 days a year and must report guest information to the government every two months.

Local governments can also implement additional restrictions and conditions. Kyoto, for instance, prohibits minpaku from being operated in residential areas.

According to the Real Estate Information Center, the number of new condo units transferred to foreigners nationwide rose 1.8% year-on-year to 9,427 units in the first nine months of 2019.

For the period, Chinese were the largest number of condo owners in Thailand with 5,430 units, a total area of around 184,000 square metres worth 20.11 billion baht.

The unit number owned by Chinese stood at 57.6%.

Surachet Kongcheep, managing director of Phoenix Property Development and Consultancy Co, said there were concerns over Chinese buyers who booked condo units at off-plan projects one or two years ago and might not get the unit transferred when the project is completed, due to the weaker yuan.

"Some projects were launched regardless of local demand as they targeted Chinese buyers," he said. "If Chinese buyers at these projects refuse to get units transferred, those units will eventually come back to the market as unsold supply."

Chinese products have been penetrating the Thai market via popular e-commerce platforms such as Lazada, JD Central and Shopee.

Lazada is majority-owned by Chinese e-commerce giant Alibaba Group, while JD Central is a joint venture of China's JD.com and Thailand's Central Group. Shopee is a Singaporean e-commerce player under Sea Group.

Alibaba's move to establish its distribution centre in the free trade zone of the Eastern Economic Corridor will also be a boon for Chinese merchants that can store their goods there without import tax.

Keeping the goods at the facility ensures faster delivery when Thai customers order Chinese goods. It's estimated that the delivery time will drop from 7-14 days to 1-3 days.

"Alibaba also has a complete e-commerce ecosystem from e-payment to logistics," Mr Thanawat said. "Policymakers need to be concerned about this intense competition."

Based on the e-marketplaces associated with Priceza, sporting goods, pet products, accessories, auto parts and home entertainment devices are the most-imported items.

"Under globalisation and capitalisation, it is impossible to deter or block a stream of capital inflow, especially from digital platforms," said Pisut Ngamvijitvong, senior analyst at Kasikorn Securities. "Local enterprises may have to create unique products and services to capitalise on the niche market sector."