The Bank of Thailand is easing loan-to-value (LTV) regulations governing mortgage lending, shortening the minimum debt-servicing period for first mortgages for those seeking a second for homes priced below 10 million baht.

Another tweak is lowering the minimum down payment for first mortgages for homes valued 10 million baht or more.

Those who buy residences valued less than 10 million baht and apply for a first mortgage are also allowed to take out a top-up mortgage of up to 10% on top of the housing loan, constituting as much as 110% for the mortgage bundled with the top-up.

The amendment is aimed at helping people to have their own homes but maintains the ability to eliminate artificial demand, he said.

The previous regulations required borrowers to make a minimum down payment for the second mortgage at 10-20% if borrowers have paid the first contract for three years or longer and less than three years, respectively.

However, the requirement of a 30% down payment for third and subsequent mortgages regardless of home prices remains unchanged. 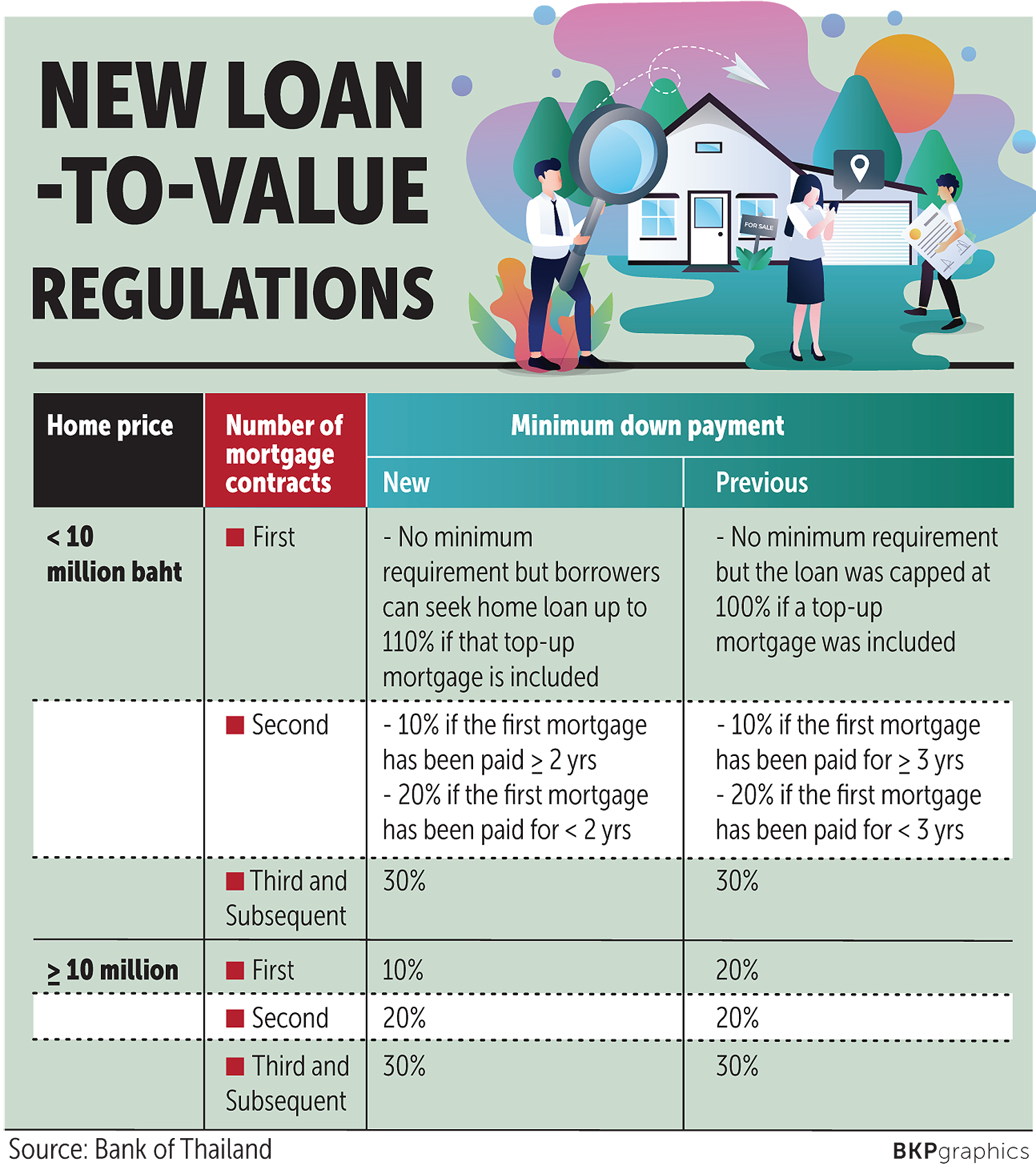 The minimum down payment of 10% is essential for those planning to buy a residence valued at 10 million baht or higher, down from 20% under the previous regulations.

Mr Ronadol said mortgage lenders are required to charge top-up mortgages at the same rate as housing loans but they should separate them in accounting records.

At present, banks typically apply the personal loan rate, which is far higher than the housing loan rate, for top-up mortgages.

"We'll keep the existing LTV at 100% unchanged for the first contract of homes priced below 10 million baht, but we'll offer an additional 10% as top-up loans for home decoration to respond to the requirements of homebuyers with real demand," he said.

"The relaxation will open opportunities for real-demand homebuyers to gain easier access to the loan product and it could also support mortgage loan growth of the overall industry by around 5%."

"Home loans are usually the last loan product to default because a home is a necessity for most consumers. But the bad debt ratio for mortgages has kept rising over the past few years, prompting the central bank to implement tough regulations governing mortgages," said Mr Ronadol.

The Bank of Thailand tightened LTV regulations in April 2018, and it has eased the requirement for co-signers in line with property developers' requests.

Moreover, the central bank has relaxed regulations related to banks' capital base for mortgages with homes priced below 10 million baht to help alleviate banks' burden and encourage them to offer housing loans to borrowers, he said.

The central bank also hopes the relaxation on the capital base requirement will encourage lenders to cut the mortgage rate and borrowers could benefit from it, said Mr Ronadol.

Separately, he said there is no sign of a decline in household debt and the issue remains a key concern for the Bank of Thailand after it climbed to 79.1% of the country's GDP in the third quarter of last year.

Chatchai Sirilai, president of GH Bank, said the loosened regulations will enable people, especially low-income and middle-income earners, to access a higher amount for home loans as those who are seeking a first mortgage can tap an additional 10% of the top-up mortgage.

GH believes the central bank's eased requirements will make it easier for people to possess their own home and alleviate their financial burden on the minimum down payment.

Home purchases are expected to increase and this will support the country's economic growth, he said.

"The high down payment should be applied from the third mortgage contract onward as a second home is the new norm," said Prasert Taedullayasatit, former president of the Thai Condominium Association.

"Today those who want to buy a second residential unit are not speculators, but real demand."

He said these buyers use a second unit near their workplace or their children's school on weekdays and stay at their first home on weekends.

At present, there aren't property speculators or those searching for a yield as the economic outlook is unfavourable, said Mr Prasert.

"The impact of the recent relaxation is not enough to encourage people to buy or invest," he said.

"If the government wants to boost the economy, they should attract those with savings to invest."