The Tourism Authority of Thailand (TAT) is working with the tourism sector to find a strategy to achieve its 3.16-trillion-baht revenue target for 2020 and offset the sharp decline in Chinese tourists this year.

A potential stimulus package comprising a financial scheme for local operators and a marketing campaign for international and domestic markets was the main focus of a meeting on Tuesdaybetween the TAT and tourism operators.

This was the first meeting since the Chinese government imposed outbound travel bans on citizens last week to contain the coronavirus outbreak.

The stimulus requires approval from the economic cabinet at the upcoming meeting on Jan 31, said TAT governor Yuthasak Supasorn.

"We still aspire to achieve the 3.16-trillion-baht target," he said. "We anticipate Chinese travellers will decrease by 2 million from last year's tally of around 11 million inbound." 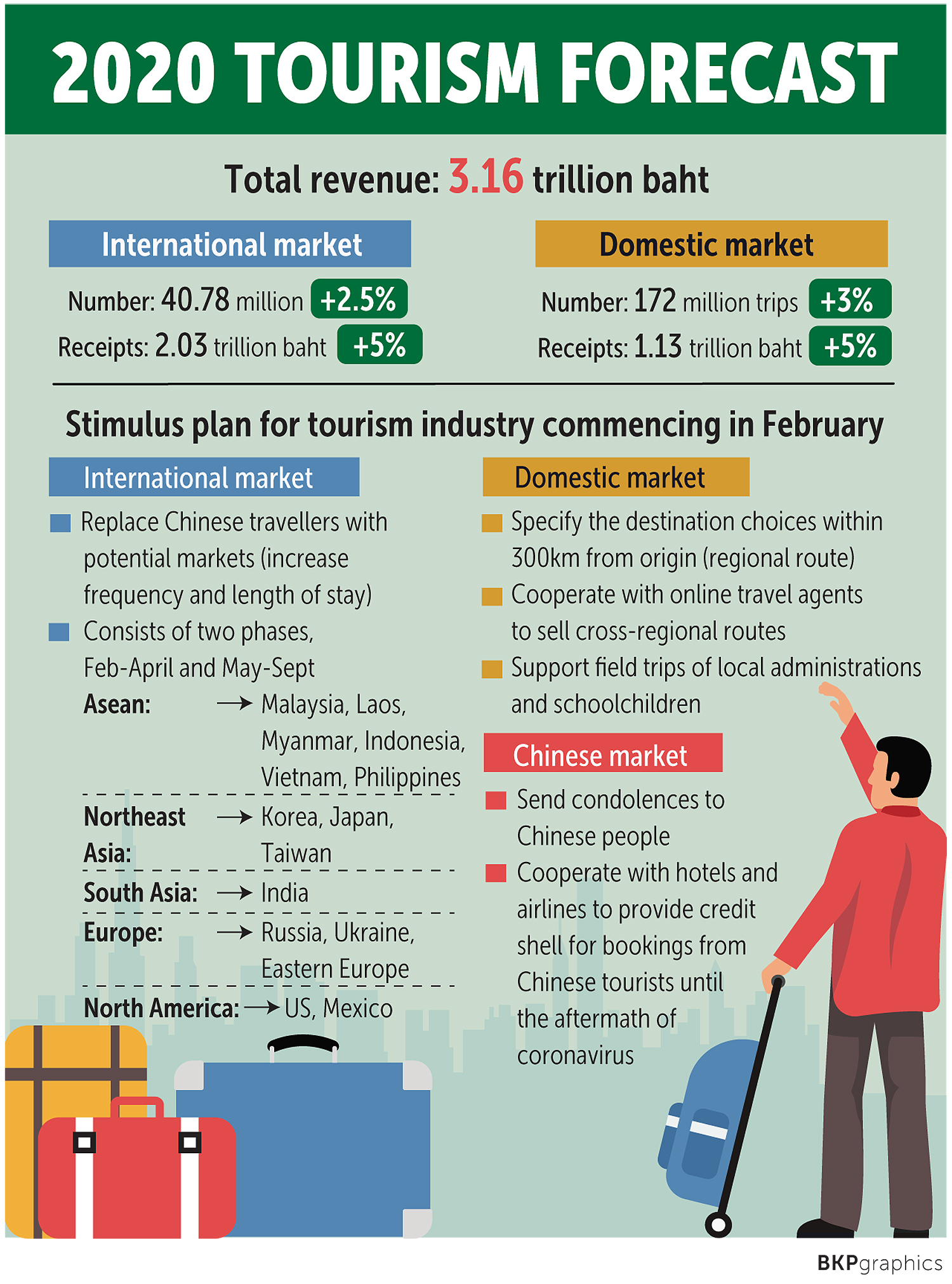 The visa-free scheme proposal previously planned for submission this Friday is on hold, Mr Yuthasak said. Going forward, the issue will fall under the supervision of a new committee assigned to supervise the ease of travel.

The task of this committee is to facilitate the flow of tourists, such as conducting a feasibility study that looks into which visa schemes most benefit the country. A version of the Taste-Shop-Spend scheme for foreign tourists has been scrapped to focus on more urgent tasks.

Instead of travel without visas, the TAT will propose the extension of the 2,000-baht visa-on-arrival (VOA) fee waiver that ended in April to the end of the year.

The VOA fee waiver will benefit the Indian and Russian markets, which contribute ever-growing numbers of tourists each year. The two are among the 16 markets set to replace the Chinese market.

In addition, the package will include a soft-loan proposal and suspension of interest payments for a certain period.

The Finance Ministry is considering the TAT's request to cut jet fuel excise tax and offer cheap loans and interest payment suspension for a certain period to tour operators to alleviate the impacts from the virus outbreak, said Finance Minister Uttama Savanayana.

The department increased the jet fuel excise tax from 20 satang per litre, which was the rate for 24 years, to 4.726 baht per litre in 2017.

The Finance Ministry is gearing up to roll out a new tourism and domestic consumption stimulus package to shield the economy from the coronavirus outbreak, Mr Uttama said.

The Fiscal Policy Office, the Comptroller-General's Department and the Revenue Department have been tasked with together studying fresh measures or the fourth round of the Taste-Shop-Spend scheme to boost domestic consumption and tourism, he said.

The fourth phase of Taste-Shop-Spend will be designed to accommodate the situation, Mr Uttama said, adding that about 5 billion baht out of the 19-billion-baht budget for the scheme remains available.