From Bangkok to the Boulevards of Paris, Absence of Chinese Tourists Hits Hard
Business

From Bangkok to the Boulevards of Paris, Absence of Chinese Tourists Hits Hard

From the Galeries Lafayette in Paris to the Erawan Shrine in Bangkok, tourist havens are feeling the absence of Chinese visitors, who normally would be flooding the globe during this Lunar New Year.

Ananta Warisnaratorn, 43, sells flowers outside the shrine, where Chinese come to pray. "Usually we will welcome over 100 buses of Chinese tourists, the shrine is crowded, and tourists are overflowing the footpath," she said. "Now it's empty."

An amulet seller nearby said his daily income has dropped to about $5 from $30. Tour guides said they had to little to do in what should have been one of their busiest weeks of the year.

The cause of their unlucky fortunes is the new coronavirus that has struck nearly 6,000 people and killed more than 130 in China. Concerns about spreading or catching the virus were causing travelers to cancel plans even before China on Monday stopped allowing tour groups to leave the country. Individual travelers can still leave, but many are also opting to cancel, according to tourism officials.

A minor part of the global tourism trade until the 2000s, Chinese visitors are now the most lucrative group for many countries. Nearly 168 million residents of China went outside the country in 2018, according to the U.N. World Tourism Organization, and spent some $277 billion. That is more than three times the travelers and five times the spending of a decade earlier.

One reason is relaxation of travel rules, both in China and in destination countries like Japan, making it easier for the burgeoning Chinese middle class to pop over to Osaka or Oahu for a bit of shopping and leisure.

In Asia, "the share of Chinese tourism in the overall tourism industry rose quite dramatically within five or six years," said Rajiv Biswas, IHS Markit's chief economist for the Asia-Pacific region. "Now they're already starting to feel slack, and cancellations are coming." 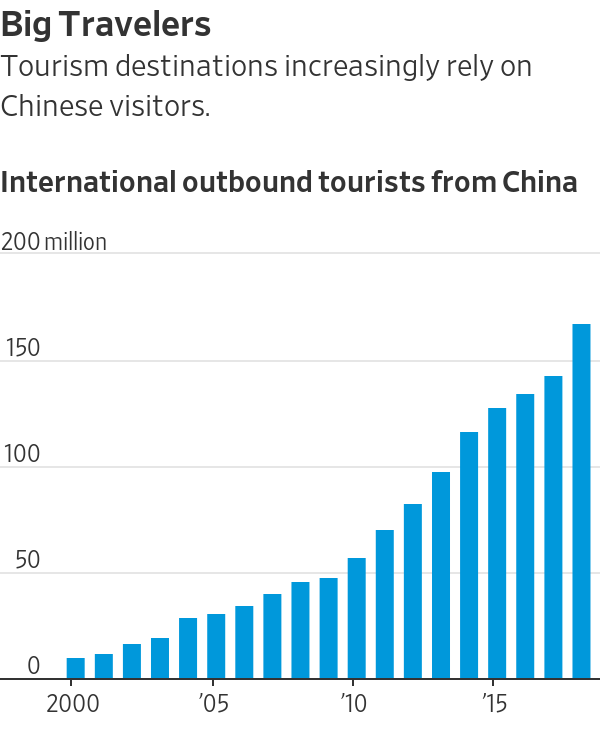 On the Indonesian island of Bali, more than a quarter of visitors are Chinese, leading many tour operators to hire Mandarin-speaking guides. But with that tourism now curtailed, an early February festival to celebrate the legendary love story of a Balinese king and Chinese princess--featuring a parade of elephants and a traditional dance with performers in lion costume--has been suspended, the governor's office said.

Determining the broad economic impact of the tourism slowdown is difficult because no one knows how long the virus and travel restrictions will last.

If the consequences of the outbreak last only through March, "that wouldn't be terrible," said Bernard Arnault, chief executive of luxury-goods maker LVMH Moët Hennessy Louis Vuitton, which just recorded record profits thanks in large part to Chinese shoppers. "If it lasts two years, that would be another story."

About the only people in tourism centers benefiting from the Chinese coronavirus are those selling hygienic face masks and other health goods. Steven Wang, a 33-year-old tourist from Shanghai, arrived in Tokyo Tuesday afternoon with his girlfriend. His first purchase, at a drugstore in the Ginza shopping district, was 100 masks for friends and relatives back home. 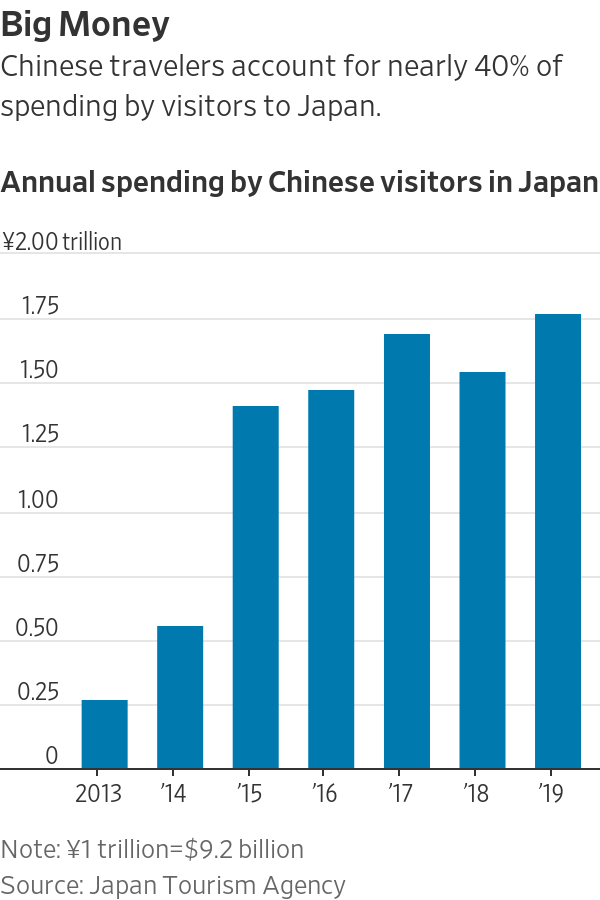 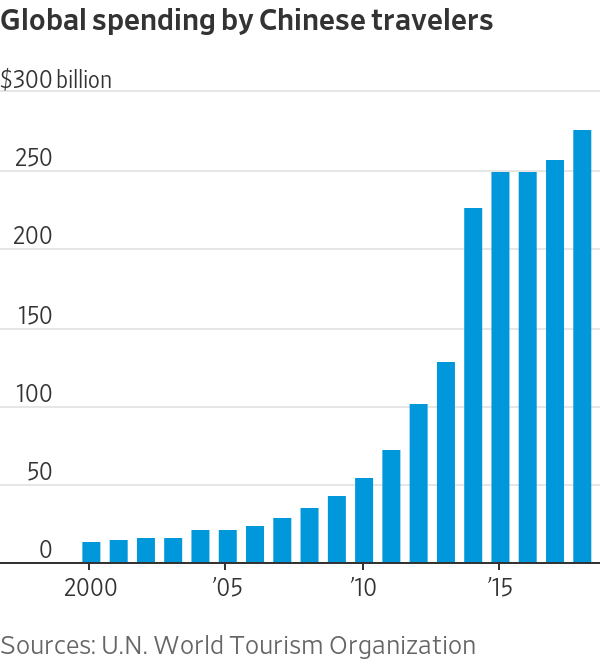 In France's capital, the Galeries Lafayette shopping emporium is usually packed with Chinese visitors and the typical luxury shop has at least one Chinese-speaking employee on hand. This week, it was a nearby pharmacy that was drawing some of the heaviest traffic.

Wen Si of Beijing and her friend were looking for a particular brand of mask when they saw an older Chinese couple buying some. They asked the couple where to find them but were told none were left.

"Since we begin to hear about coronavirus, it's totally different. Chinese customers are really scared," said pharmacist Daniel Machover. He said the store recently has been selling 1,000 masks a day, compared with the typical one to five. Paris, hit by several cases of the new coronavirus, has canceled its Lunar New Year Parade.

A tourist from Nanjing who gave his surname as Chen said he and his wife had decided to extend their stay in the city for a week because they were too afraid to go home and risk being quarantined. He purchased a thermometer at another pharmacy and, while waiting for his wife to finish her shopping, took his temperature. It was normal.

The stress of virus news had eaten into their travel plans.

Wilawan Watcharasakwet in Bangkok and Megumi Fujikawa in Tokyo contributed to this article.