Knock-on impact from sharp tourism slowdown could be broad and last for many months.

We now see downside risks to Thailand's growth outlook in 2020, given the impact from the coronavirus outbreak on the tourism industry and broader economic sentiment.

Our core view is Thai economic growth would rebound to 3.0% this year, following an estimated 2.5% expansion in 2019. This was based on an expectation for supportive fiscal measures, some improvement in household consumption and foreign investment, and looser monetary conditions to boost domestic activity.

However, we earlier noted external headwinds as a continuing drag given the slowing Chinese economy, the impact of the strong baht on export competitiveness and the rising potential for a loss of preferential access to the US market.

However, the spread of the Wuhan coronavirus poses a further risk, potentially weakening Chinese demand more dramatically and affecting tourism from elsewhere, as well as denting Thai domestic confidence.

As such, risks to the Thai economy are now increasingly tilted to the downside. In the event of a more prolonged and deadly outbreak of the virus, growth in Thailand could be significantly lower as tourism, which directly and indirectly accounts for about 22% of GDP, declines and domestic activity stalls.

Tourism receipts alone account for almost 14% of GDP in Thailand. Chinese tourists accounted for 27.6% of the 39.7 million foreign arrivals in Thailand last year, spending on entertainment, food, accommodation, travel and other services. They have become increasingly important to Thailand, as the baht's strength and reduced interest from Europe has posed challenges to the tourism sector.

In 2019, the number of Chinese tourists rose 4.4% to 11 million, compared to a decline of 0.6% in European arrivals to 6.7 million. With the Chinese government banning overseas tour groups and tourists taking precautionary measures, the Tourism Authority of Thailand (TAT) expects 2 million fewer Chinese tourists in 2020, according to Reuters.

The TAT estimates this could result in a 50-billion-baht loss of income for the economy, around 0.3% of GDP, but this probably does not take into account the wider impact on sentiment and activity. The drop could be more pronounced if Thai authorities follow other governments in denying entry to foreigners who have spent time in China since the outbreak. 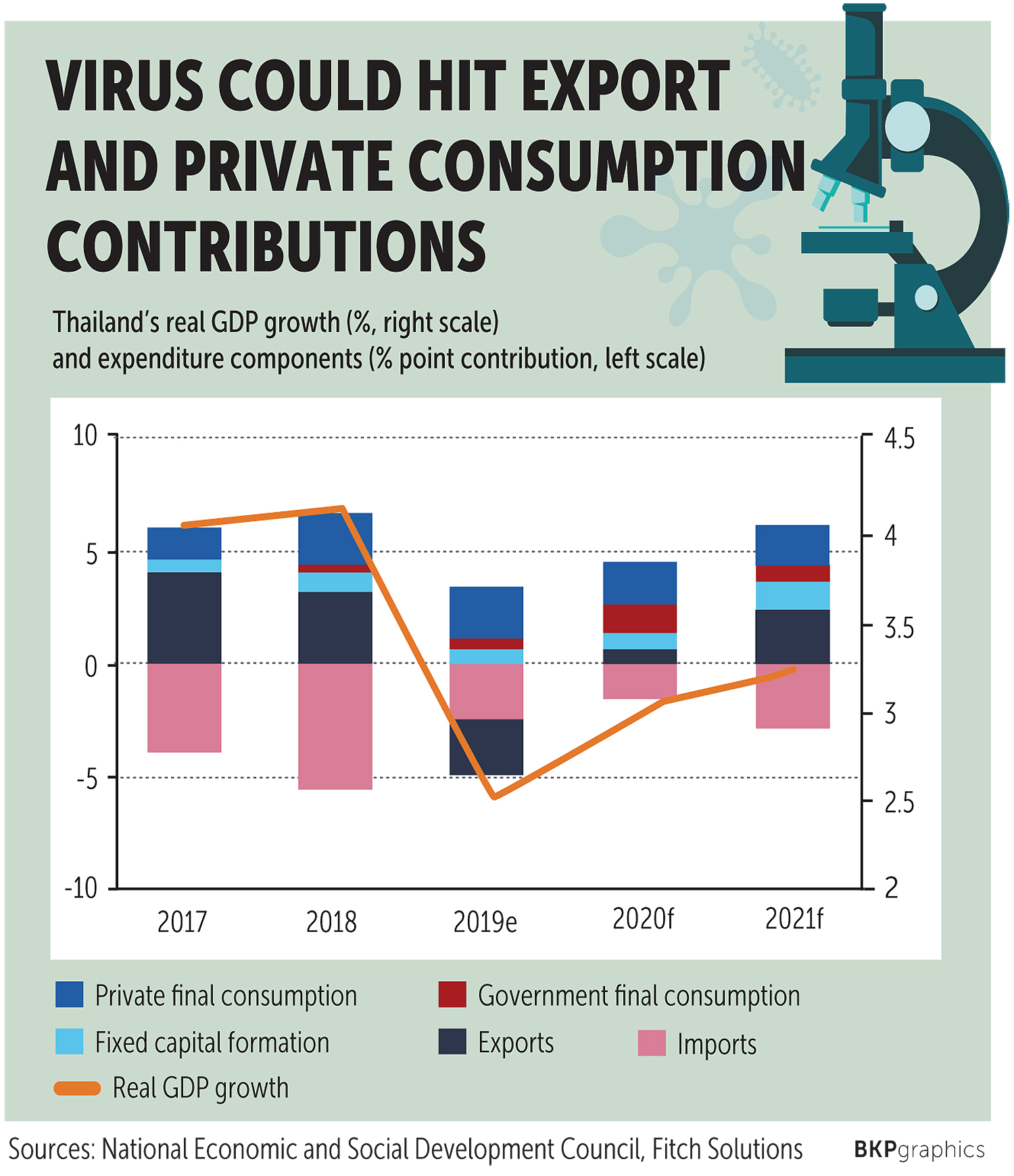 Tourism from other countries could also weaken, along with domestic travel, because of fear of the virus in Thailand and uncertainty surrounding travel to the region overall. As of Feb 3 Thailand had reported 19 confirmed cases of the virus, behind only Japan (20 cases) for the most outside China.

This may raise the risk perception surrounding travel to or around Thailand, particularly while details of the virus remain unclear and a vaccine is not yet available.

Already many airlines have cancelled flights to China, but the virus may deter bookings and add to uncertainty around travel bookings to the region. As such, tourism could contract sharply over the coming quarters and the effect could be felt throughout 2020 as tourists plan trips months in advance.

A contraction in tourism and also business travel would likely result in the Thai economy struggling to rebound, with exports, investment and consumption growth coming in lower. Indeed, we forecast exports to contribute 0.6 percentage points to headline growth in 2020, private consumption 2.0 points and fixed capital formation 0.8 points.

The impact of the virus spread will be felt largely through exports as travel receipts decline. However, we also note delays to business travel could result in postponed investment plans.

Furthermore, the tourism sector contributed an estimated 21.6% of the economy and one in six jobs in 2018 according to the World Travel and Tourism Council. Travel receipts alone accounted for 73.9% of service exports in the first three quarters of 2019, according to Bank of Thailand data. As such, declines in the sector will likely result in a further deterioration of already weak domestic consumer and business confidence, straining household consumption and fixed capital formation.

As a reflection of investors' concerns, the baht has weakened 2.75% between Jan 16 and Feb 3, breaking through near-term support. 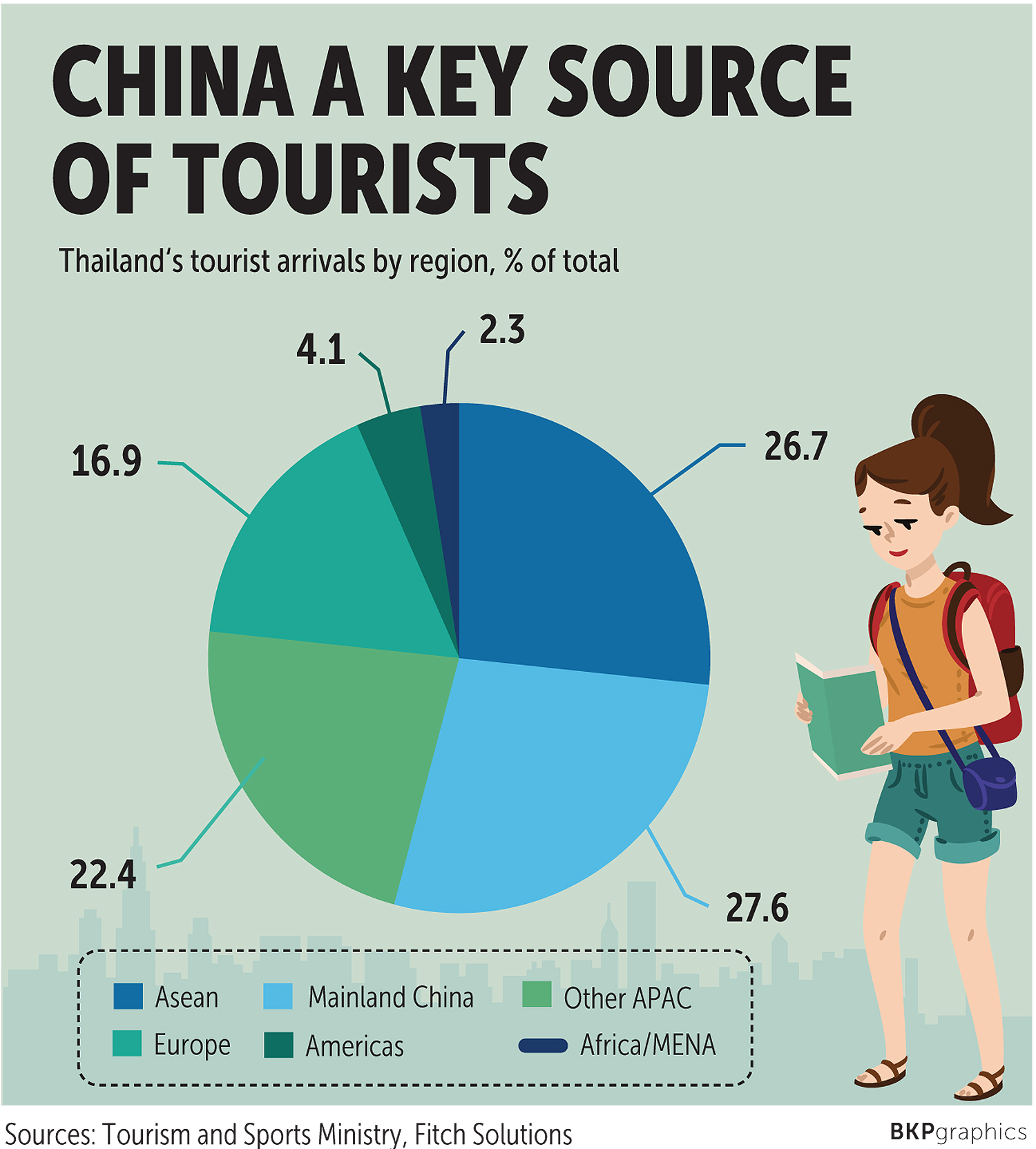 In response, the government has announced a potential stimulus package targeted at supporting consumers and the travel sector. This would be in addition to the planned fiscal stimulus via 2020 budget -- now stalled pending a court ruling on its validity -- and a tax package aimed at encouraging investment approved by the cabinet on Jan 25.

Potential further activity includes the extension of measures passed in August 2019 that are meant to provide incentives to domestic travellers.

The government will also likely look to support employment, encouraging businesses to keep staff on despite the weaker business outlook. Moreover, Thailand has excess savings relative to its investment rate and reforms to boost investment could support the economy.

Fiscal stimulus remains an option for the government, given Thailand's public debt stood at 41.2% of GDP at the end of 2019, which is relatively low for a country at its stage of development.

On the monetary side, the Bank of Thailand could ease monetary policy further, although this is not our core view, and we would expect further policies to weaken the baht may be announced over the coming months.