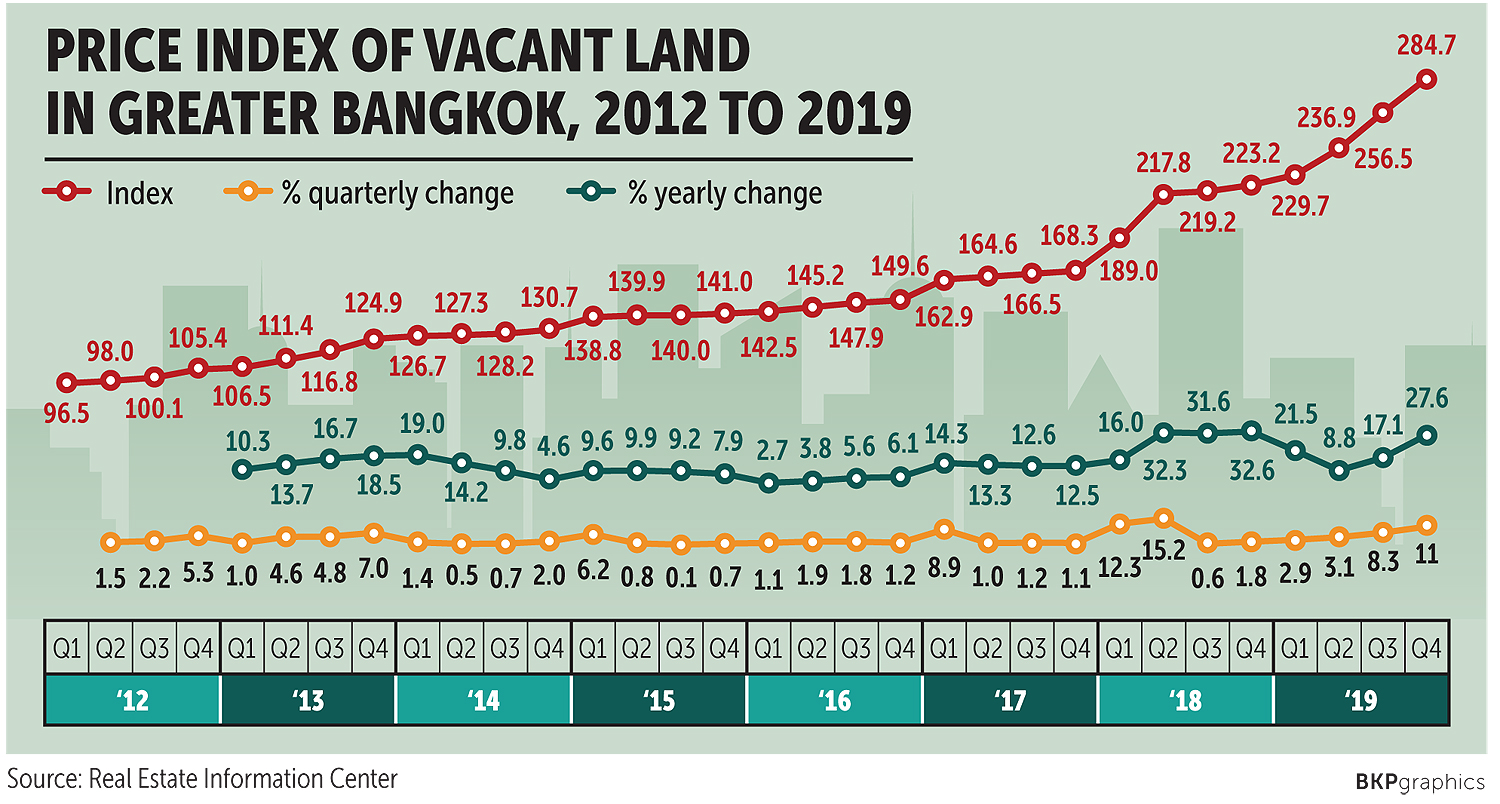 Vichai Viratkapan, acting director-general of the Real Estate Information Center (REIC), said the price index of vacant land in Greater Bangkok rose 11% to 285 in the last quarter of 2019 from 257 in the third quarter.

During the third quarter of 2018, the Bank of Thailand gave its first signal to apply a macroprudential policy for mortgages, suggesting the loan-to-value limits that took effect on April 1, 2019.

According to the REIC, the price index of vacant land in Greater Bangkok in the fourth quarter soared by 27.6% from the same quarter of 2018.

"The increase in vacant land price in the fourth quarter was attributed to locations near terminal stations of mass transit lines that are going to open soon," Mr Vichai said. "Most of these locations are suitable for single house, townhouse and duplex house development."

The opportunities in new areas emerged at a time when the condo market is facing fierce competition because of lower demand and too much supply.

Many developers are shying away from high-rise residential development.

Lalin Property Plc will only launch single detached house, townhouse and duplex house projects, as it forecasts a drop of 20% in the condo market this year.

Similarly, of the 30 new projects from Supalai, 25 will be low-rise developments -- the most in five years.

Land & Houses Plc rolled out its 2020 business strategy with all 16 projects planned as townhouse, duplex house and single detached house.

"The low-rise segment is real demand," said Naporn Sunthornchitcharoen, CEO of Land & Houses. "The condo market is weak because too much supply remains unsold and market sentiment is unfavourable."

According to the REIC, the top five locations near mass transit lines with the highest increase in vacant land price in the fourth quarter were Kukot-Lam Luk Ka near the South Green Line with a rise of 66%.

This location will have an extension of the Green Line from Mor Chit-Saphan Mai-Kukot.

It was followed by Kae Rai-Min Buri near the Pink Line with an increase of 34.8%. Construction progress of this line was 48.1%.

The third-highest rise in vacant land price was in Taling Chan-Salaya near the Light Red Line. The location saw a rise of 15.8% in the fourth quarter.

Locations from Bearing to Samut Prakan and Samut Prakan to Bangpu were fourth, up 7.7% each, followed by locations near the Grey Line, including Watcharapol-Rama IX-Tha Phra with 7.6% growth.