Slower demand growth seen in 2020, while programmes such as solar rooftop have yet to make meaningful impact. By Tris Rating

Tris Rating expects the power sector to experience continuing long-term growth in demand for electricity, in light of economic growth, increased urbanisation and digitisation. The softening economy could slow electricity demand somewhat, but only temporarily.

However, operators in the power generation industry will face a few key challenges. First, strict regulations in combination with unclear policies have the potential to diminish opportunities domestically.

Second, we expect a transition towards private power purchase agreements (PPA). This business model affords less protection than having state electricity authorities as purchasers. Finally, residential consumers themselves may become power producers in the longer term.

Electricity consumption in Thailand generally expands at a similar rate to GDP growth. About half of all demand for power comes from the industrial sector, with residential and business users, including commercial properties, accounting for about 20% each.

Electricity consumption in the first 10 months of 2019 grew 4.1% year-on-year, slightly above the 3.5% average seen since 2015. The growth was primarily driven by residential and business users, reflecting an overall rise in temperatures and expansion of commercial properties. 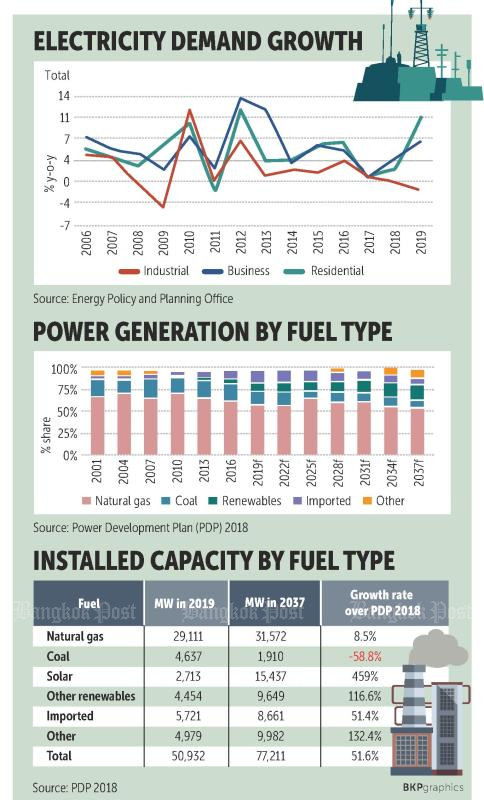 Natural gas will continue to be the major fuel source. In 2019, natural gas contributed 57% of total power generation, and it will still account for around 50% by 2037.

The PDP also targets a huge increase in renewable energy, mostly solar power. It seeks to add 100MW from household solar rooftops per year from 2019-29. Solar roof projects will be eligible for a feed-in tariff (FiT) of 1.68 baht per unit (kilowatt/hour). The FiT is relatively low as the policy seems to encourage self-consumption rather than commercial sales.

As of September 2019, around 20MW of solar rooftops had been developed. Given the low number of participants, the government is looking to revise the mix of renewable power, with higher contributions possible from biomass and waste-to-energy plants.

To minimise the impact of these changes, power plant operators have been adjusting their business plans by diversifying to alternative fuel sources, developing plants overseas or creating new business models.

Many solar operators have begun to explore investment opportunities outside Thailand, in countries such as Japan and Vietnam. This reflects declining FiT rates and a lack of new solar farm projects in Thailand. But in our opinion, investing in overseas projects carries higher risk than domestic projects, even in countries that are more developed than Thailand.

Japan was the first overseas destination for Thai solar operators. Before 2016, Japan promoted solar energy by offering very high tariff rates of ¥32 to ¥42 per unit. But strict laws and regulations have delayed many projects, and costs are high.

Moreover, some power plants have undershot their output estimates because of unfavourable weather conditions. With tariffs now just ¥20 per unit, it is unlikely Thai operators will invest in any new solar projects in Japan.

Vietnam, meanwhile, concluded solar farm PPAs totalling 4,000MW with a FiT of 9.35 US cents per unit. However, Electricity of Vietnam is assessed as a less creditable off-taker relative to its peers in Thailand. Vietnam also needs to improve its transmission capacity, as the rapid addition of 4,000MW of power caused grid overloads in some areas.

Independent power supply or IPS, operating independently of the national grid, is based on private PPAs and self-consumption. The key players include small power producers that sell electricity to industrial users (IU-SPP) and operators of solar rooftops installed over factories and department stores.

According to the Energy Policy and Planning Office, total installed IPS capacity stood at 9,063MW as of June 2019. The majority was IU-SPP, contributing 4,298MW.

Tris Rating expects the number of independent power suppliers to increase, as the Electricity Generating Authority of Thailand will reduce purchases from small power producer replacement projects to 30MW from 60-90MW.

As well, we expect more solar rooftops to be developed on factories and department stores.

However, IPS is subject to higher business risk. Producers cannot maintain stable and strong margins as in the case of regulated producers. Private PPAs also lack a fuel cost pass-through mechanism, so the operator will likely be exposed to higher price volatility risk.

Tris Rating expects the average adjusted pre-tax return on permanent capital (ROC) of rated electricity producers to remain at 9% in the next few years. In general, revenue and profit in the power industry are relatively stable in comparison with other industries.

The stability comes from distinct power purchase contracts that characterise the industry. The risk of lower than expected returns might arise from external factors, such as curtailment in Vietnam, or irregular weather patterns in Japan.

Operators with higher returns than the industry average benefit from old subsidy schemes, which provide much higher tariffs than more recent projects.

New renewable power plants tend to receive lower tariffs. However, we also expect power plant costs to decline, offsetting the lower subsidies. It is unlikely that ROC will increase in the foreseeable future, unless new projects are developed with more favourable tariffs.

Although power operators benefit from a stable income, they tend to carry high levels of debt. We forecast a rise in the ratio of average adjusted net debt to earnings before interest, tax, depreciation and amortisation of rated electricity producers to nearly five times in the near future.

The ratio is relatively higher than other industries as power plant projects are around 75% funded by debt on average. This typically results in high debt obligations at the project level during the early stages. The leverage ratios of some operators are higher than the industry average because of their weighty investments in many new projects.