Hundreds of new coronavirus cases were reported across the region on Wednesday, mostly in South Korea, spurring pandemic fears that have jolted markets this week.

Public Health Minister Anutin Charnvirakul said on Wednesday that one of three new coronavirus patients in the country risked becoming a super-spreader, an incident of large transmission from a single source. 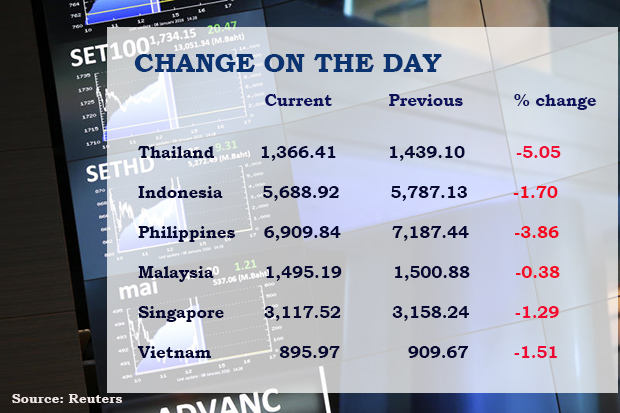 The baht slid to a nine-month low and the benchmark stock index plunged 5% to its lowest since late 2016. That ran ahead of big drops in Manila, Jakarta and Ho Chi Minh City.

"Seeing how Korea is blowing up, (Thai) markets seems to be hoping for the best but planning for the worst," said Kobsidthi Silpachai, head of capital markets research of Kasikornbank in Bangkok.

"The dramatic surge in Korean cases questions the authenticity of the low reported cases in Thailand... we don't know if Thailand's hot weather is actually suppressing the spread, or the sad truth has not yet been revealed."

Sentiment was further dampened by Thailand's dismal manufacturing production data that contracted for a ninth straight month in January.

Philippine stocks dropped to their lowest close in over 15 months in "pent-up selling" as trading resumed after a holiday, said Rachelle Cruz, an analyst with AP Securities. Sentiment was also hurt by China's latest attempt to crack down on Manila-based online gambling firms (POGOs) as local media reported that mass deportations of Chinese nationals working at POGOs could be on the cards.

Bourses in Bangkok and Manila have dropped 8% and 6% so far this week, respectively. Indonesian shares fell to their lowest close in nearly 18 months, while financial and industrial stocks weighed on the Singapore benchmark.