Tycoons ready to splash out on Tesco
Business

Tycoons ready to splash out on Tesco

Tesco's Asian operations include some 2,000 supermarkets and convenience stores in Thailand. (Photo by Pawat Laopaisarntaksin)

The battle between Thailand's retail titans for Tesco is heating up, with all three giants saying they have placed bids for a deal that is expected to be one of Asia's biggest transactions this year.

A source at Charoen Pokphand Group, the country's biggest agribusiness conglomerate, confirmed on Wednesday that CP Group had submitted a bid for UK-based Tesco's Asia business, while a Central Group source said the group also filed a bid.

Both sources asked not to be named and declined to provide further details.

In January, the top boss of Big C Supercenter acknowledged that the company was keen to acquire Tesco's Asia business and had submitted its intent to bid.

Reuters reported on Feb 27 that Tesco had asked bidders to submit binding offers for its Asian business by Feb 28. 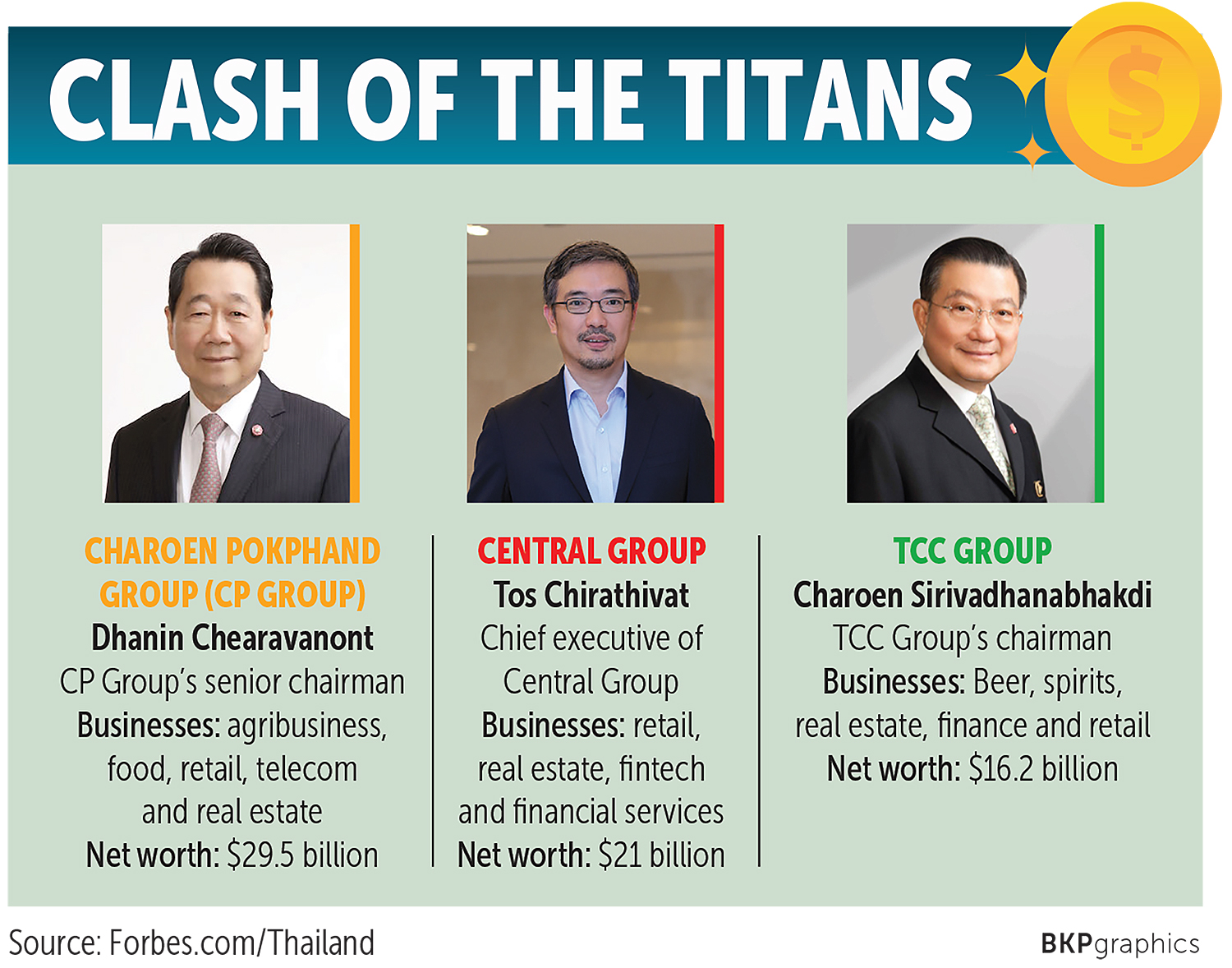 Tesco's Asian operations comprise 2,000 supermarkets and convenience stores in Thailand, where it is one of the biggest retail players, and 74 stores in Malaysia.

Britain's biggest retailer said in December that it had begun a review of its Asian business, made up mainly of the Thai and Malaysian operations, after receiving interest.

In the six months to Aug 24, Tesco's Thai and Malaysian businesses together generated sales of £2.56 billion (US$3.3 billion) and an operating profit of £171 million.

CP: Most to gain?

"CP Group may have a better relationship with Tesco than TCC Group because CP is the company that brought Tesco to Thailand two decades ago," said Witawat Rungruangphon, a marketing lecturer at Thammasat Business School. "But Tesco is likely to sell its Asia business to companies that offer the best buying conditions, rather than based on a relationship."

Mr Witawat said he believes CP will gain the most benefit if it wins the bid because CP only has 7-Eleven convenience stores and the Makro cash-and-carry business.

According to Mr Witawat, if TCC Group wins the Tesco deal, competition in the hypermarket segment will plunge because TCC already owns the Big C chain operating hypermarkets -- the same segment as Tesco.

Suwat Wattanapornprom, an analyst at Asia Plus Securities, said the winner will benefit in any case, though CP Group is likely to gain more than TCC Group.

Tesco would be an important piece of the puzzle for the hypermarket segment, and CP can use this to serve a whole range of customers -- from individual retailers through more than 10,000 7-Eleven stores and hypermarkets to the wholesale segment via Siam Makro with around 130 branches nationwide.

"CP will have higher negotiating power for suppliers according to their full-range market segments," Mr Suwat said.

For TCC Group, which controls about 200 branches of Big C hypermarket, the group can benefit from business synergy, but this might be less than CP's because combined nationwide branches of Tesco Lotus and Big C number more than 300 branches in 70 provinces.

"No matter who wins, there is only one competitor in the hypermarket segment -- that is Makro," Mr Suwat said.

The share price of equities related to the two conglomerates will edge up if either CP Group or TCC Group uses one of its non-listed companies to bid for Tesco's Asian assets, since sourcing financing for the deal would not have much impact on non-listed entities, he said.

But in the case of submitting a bid on behalf of their SET-listed companies, the impact on share prices would depend on financing for the deal, Mr Suwat said.

He said the share price could rise if these SET-listed companies raise funding via equity issuance. But the share price would be moderately stable if bridge financing were used, as some investors might be concerned about a debt-funded acquisition.

Consumers, meanwhile, are expected to be on the losing side of the deal.

Shoppers will have fewer choices to access the supply of groceries and other daily-use products, as one of the giant conglomerates will eventually acquire a higher market share in the retail segment, Mr Suwat said.

ASP has asked the Office of Trade Competition Commission (OTCC) whether the acquisition would be considered a monopoly. The commission's response is unclear because the definition depends on the calculation base.

"To qualify as a monopoly it must have a market share of more than 50%," Mr Suwat said. "But if the mom-and-pop stores are included, they [the conglomerates] might not be categorised under such criteria."

Meanwhile, one source close to the matter suggested that the government involve itself somehow in the deal to make sure the windfall from a bidding war among the giant companies doesn't solely enrich Britain-based Tesco.

That said, it would be highly unusual for the government to intervene in this way in a sale between private companies.

A Thai retail guru who asked for anonymity said CP would gain the most from a winning bid, noting that CP has an integrated food business. Tesco would provide an additional channel to sell CP's food, augmenting its existing distribution channel.

"Nonetheless, suppliers will face a more difficult time because CP will have higher purchasing power, resulting in more benefits than for TCC Group, in particular efficient cost management," the guru said, adding that market domination is difficult in theory because of the Trade Competition Act.

Santichai Sarathawanphaet, a spokesman for the OTCC, said the office has been closely following the progress of the Tesco deal, with a special panel already established to evaluate the impact of the deal, which could lead to a monopoly or market dominance of the retail sector.

The OTCC has also already informed related businesses to be cautious and to comply with the Trade Competition Act, adding that the authorities are ready to take legal action if they are found to have breached the act.

"The prospective buyers of Tesco's Thai operations tend to be big players and dominate the retail market," Mr Santichai said. "If the purchase falls within the scope of market dominance, the buyers need to ask for the office's permission. They need to thoroughly study the retail market structure, its impact on the overall market and benefits to consumers and the overall economy."

Violation of the law would incur a penalty of 0.5% of the transaction value of the purchase.