The path to National Telecom
Business

The path to National Telecom

Smartphone users are poised to benefit after the Feb 16 spectrum licence auction awarded bandwidth for 5G use. Thanarak Khunton

The merger of TOT and CAT into a new company, called National Telecom (NT), is believed to be the government's final push to provide a lifeline to the two state telecom enterprises.

Over the past two years, the government has tried to set up a new subsidiary to operate under each of the two telecoms, but the plan failed to get off the ground.

The Digital Economy and Society (DES) Ministry deems a merger the best solution because of strong support from low-ranking employees, especially labour union members, at the two enterprises.

The merger is to be completed by July after the cabinet approved the proposal in January.

The marriage could face unavoidable challenges, including friction among managers about their roles in the merged company, according to observers.

The new organisational structure will also be scrutinised, and some units may be made redundant.

No one is certain whether the merger will take place in the time frame laid out, given a host of challenges.

DES Minister Buddhipongse Punnakanta told the Bangkok Post that the merger is not only the best solution, but also the one accepted by all parties, particularly the unions and the management of the two state enterprises.

He said he was concerned about completion of the merger, which could happen behind schedule.

TOT and CAT hired a consultancy for 30 million baht to look into related laws, human resources, finance and strategy for the merger. Some 13 panels have been set up to follow through on the merger and ensure employment welfare.

"The government can guarantee that layoffs are not our policy for merger implementation this year," Mr Buddhipongse said. 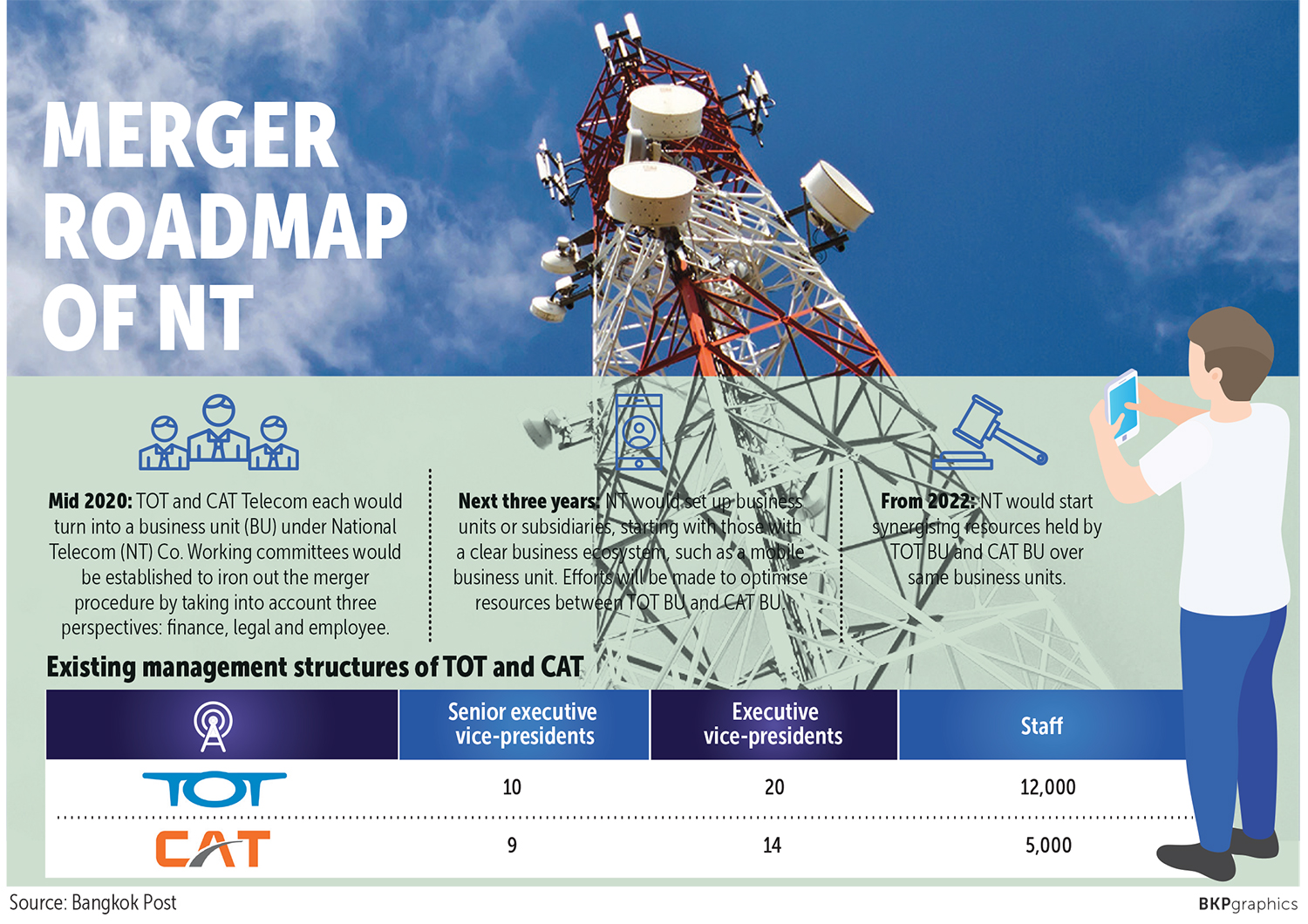 The merger was first proposed by Prime Minister Prayut Chan-o-cha's military-led government after the 2014 coup.

TOT and CAT are meant to merge into a single organisation, in which a 100% stake is held by the Finance Ministry, while management decisions will be made by the NT board.

The government wants to see the merger generate specific benefits, such as strengthening business, eliminating redundant investment, creating open infrastructure for the industry and the public, and adding value to existing assets.

Wholly owned by TOT, NBN would have owned all domestic networks for TOT, including transmission and fibre optics. The hypothetical company would also have provided network capacity for TOT, CAT and private operators running telecom services.

Wholly owned by CAT, NGDC would have owned submarine cables and data centres while offering international network capacity to CAT, TOT and other private operators to provide digital services.

Due diligence on the assets and transfers for NBN and NGDC were planned to be complete in April 2018. But the DES Ministry decided to suspend progress to allow time for a clearer plan for transfer to study the impact of the move on organisations and employees.

The suspension came after employees and the public staunchly opposed the concept of NBN and NGDC.

The CAT and TOT labour unions petitioned the Central Administrative Court to revoke the DES Ministry's establishment of NBN and NGDC. They said the plan would create two more state-run telecom enterprises and lead to efficiency.

The plan eventually faltered as the two new organisations were deemed to lack flexibility in investment and decision-making.

The procedure for the establishment of the two bodies is also understood to conflict with a cabinet resolution of Dec 4, 2007 governing the legal practices of setting up subsidiaries of state enterprises.

The resolution bars the formation of state enterprise subsidiaries deemed to run core businesses instead of their parent enterprises, unless the future impact on the parent companies is vetted and the move is approved by the cabinet.

The unions and several top managers of the two enterprises also said the two new companies would create confusion in operations.

TOT and CAT both hold partnership deals with other private mobile operators on the use of frequency holdings. Questions have been raised as to what would happen with the two state enterprises after the deals end in 2025, when they would be forced to return the spectrum ranges to the National Broadcasting and Telecommunications Commission (NBTC).

The spectrum ranges that TOT and CAT occupy will still be used until 2025 despite the merger, said NBTC secretary-general Takorn Tantasith.

"Although the right of spectrum usage is specifically given to the companies awarded, the merger is done under the Public Company Act and the Commerce Ministry's specific laws, which would not affect the rights of spectrum held by TOT and CAT," Mr Takorn said.

The management structure of NT will be closely watched.

A TOT executive acknowledged that several executives of TOT and CAT would face huge challenges in their career path upon completion of the merger.

TOT has the bigger organisational structure, with roughly 12,000 employees to CAT's 5,000.

The same executive said several upper-level managers are nearing retirement and may not pay attention to what happens with NT over the next five years.

The best way to deal with these executives is to make all SEVPs and EVPs of TOT and CAT advisers of NT at the same rank and salary they receive, the executive said.

Any advisers who want to become SEVPs and EVPs in NT must apply for the positions, this person said.

CAT Telecom chief executive Sanphachai Huvanandana said the CAT board and its labour union fully support the merger plan, which is an improvement on previous alternatives.

"CAT and TOT have to enter the new structure to ensure sustainable growth in the long term instead of relying on existing resources awarded in the past," Col Sanphachai said. TOT has a partnership deal with DTAC through DTAC TriNet for 4G service on TOT's 2300-megahertz frequency range.

Under the deal, which expires in 2025, DTAC TriNet agrees to lease telecom equipment and domestic roaming service for the 4G LTE-TDD network on 60MHz of bandwidth in the 2300MHz range.

DTAC TriNet is committed to investing in more than 20,000 base stations nationwide, covering 80% of the population, plus an annual fixed payment of 4.51 billion baht to TOT. Some 60% of the capacity of the network developed is used by DTAC TriNet and the rest is held by TOT, which also runs its own 4G service.

Regarding CAT, True Move H Universal Communication (TUC) has a partnership deal with the state enterprise for 4G service on CAT's 850MHz network. This deal also expires in 2025.

In the Feb 16 auction for 5G spectrum licences, TOT won four slots on the 26GHz range and CAT secured two slots on the low-band 700MHz range.

Industry veterans expressed little concern about the substantial impact the two players would have on the industry.

Neither participated in bidding for the 2600MHz mid-band spectrum, deemed a crucial frequency range for the early stages of 5G service or enhanced mobile broadband.

Mr Buddhipongse's policy supported participation by TOT and CAT in the auction, as he wants both enterprises to stay afloat in the mobile business ahead of their core spectrum holdings' expiry in 2025.

Both enterprises are also expected to provide public services via spectrum licences they secured at last month's auction.

Col Sanphachai said the 700MHz range obtained by CAT is a low-band range that can be used for a backbone network, since the frequency range is more capable than higher bands of transmitting mobile signals in broader areas nationwide.

CAT aims to use the 700MHz range for 4G service first and expand into 5G service later. It also wants to serve as an infrastructure sharing provider. CAT has announced that it will invest up to 20 billion baht in its 700MHz network roll-out through operations under NT.

CAT has 20,000 telecom base stations nationwide and roaming agreements with DTAC for the 1800MHz range and TUC for the 850MHz range.

Since CAT has good relations with TUC, the latter is likely to seek another partnership deal with CAT on the 700MHz range that the state enterprise won at last month's auction to enhance TUC's low-band capacity, as well as with AIS.

The merger process is moving ahead in line with the schedule and has not faced opposition towards plans for new revenue resources to drive NT.

Developments in the merger still bear watching, as many key details remain unsettled.