The government has announced plans to transform the country into the electric vehicle and motorcycle hub of Asean within five years via state measures to boost demand, though some critics continue to doubt Thailand’s ability to create a full-fledged EV ecosystem.

The government has drawn up a roadmap to promote EVs through state agencies and has set a target to produce 250,000 EVs, 3,000 electric public buses and 53,000 electric motorcycles by 2025.

Deputy Prime Minister Somkid Jatusripitak said the government wants to promote Thailand as the centre of a new generation of auto manufacturing.

“The Board of Investment (BoI) should revise EV privileges for car and auto parts makers to make production more attractive,” Mr Somkid said.

In March 2017, the government launched EV promotional privileges for car and auto parts makers covering three types of EVs: hybrid, plug-in hybrid and battery-powered. The privileges include tax holidays of 5-8 years and import duty exemptions for cars and machinery.

The government had a meeting yesterday with the National New Generation Vehicle Committee to promote the state’s EV development scheme and discuss ways to promote sales as the market develops.

Industry Minister Suriya Juangroongruangkit said the EV master plan aims to increase EV production to 30% of total annual car production, or about 750,000 units out of 2.5 million by 2030. 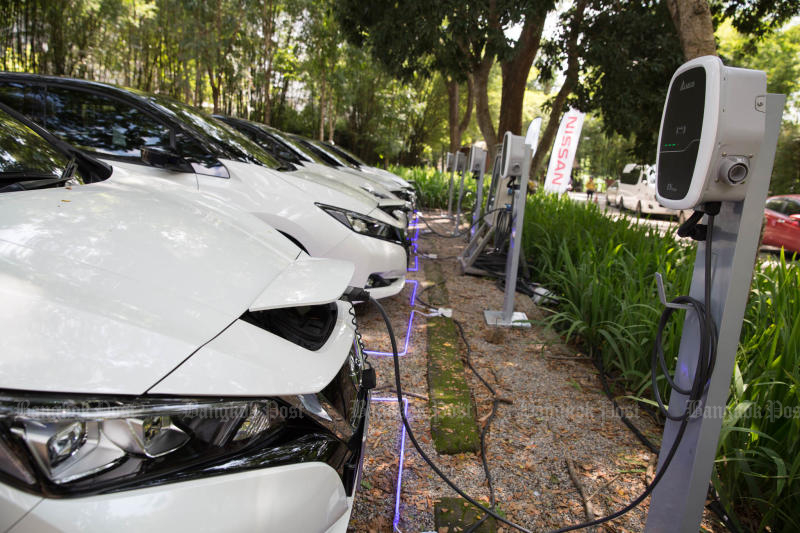 Delta Electronics Thailand is presenting EV charging solutions. The company will share news about its app development at the Delta-MEA MoU signing on Tuesday.

The Industry Ministry plans to launch a three-year car and motorcycle trade-in scheme for those who bring in their old motorcycle and buy a new electric one. The state will subsidise 15,000 baht per motorcycle from a planned budget of 750 million baht.

“The government plans to talk with motorcycle taxi drivers and domestic financiers to push the project forward,” Mr Suriya said.

The ministry agreed to speed up its EV policies, as the sector is being promoted as a target industry under the S-curve policy.