Chamber of commerce urges all three lines be built at once, but MRTA says state has other mass transit priorities too

Businesses say the planned 27-billion-baht tramway project will help stimulate the local economy, which is experiencing a downturn as a result of the novel coronavirus (Covid-19) pandemic.

Somchai Ueawongchai, secretary-general of the Chiang Mai Chamber of Commerce, said the Covid-19 outbreak has dealt a significant blow to Chiang Mai's economy because the tourism sector accounts for a significant part of its economic output.

He said the 27-billion-baht public transit project will attract local investors to the province and help reboot growth.

"[The tramway] will certainly stimulate local businesses and increase the number of jobs in construction. Many real estate projects will be developed along the route and land prices will increase," Mr Somchai said.

He was speaking at a regional event held by the Mass Rapid Transit Authority of Thailand (MRTA) over the weekend to promote the construction of electric train routes in Chiang Mai.

While he was generally upbeat about the prospects of the Chiang Mai tramway, Mr Somchai warned it will be difficult for the government to find private investors who would want to invest, as the government's proposed investment model for the tramway project is projected to yield low returns.

"As of now, the government will build the Red Line. However, the fate of the Blue and Green lines are still uncertain," he said.

"If the government were to only build the Red Line, I doubt private investors would be interested at the tramway project at all, as the Red Line doesn't pass through Chiang Mai's main tourist areas, like Chang Khlan."

He urged the government to build all three lines at once, because he believed having a single tram line won't help ease Chiang Mai's growing congestion problem.

"The cost of constructing three tram lines in Chiang Mai is about 100 billion baht, which is about the same as the cost of one line in Bangkok. The Red Line is a good start, but it won't be enough -- we need a proper mass transit network here," he said. 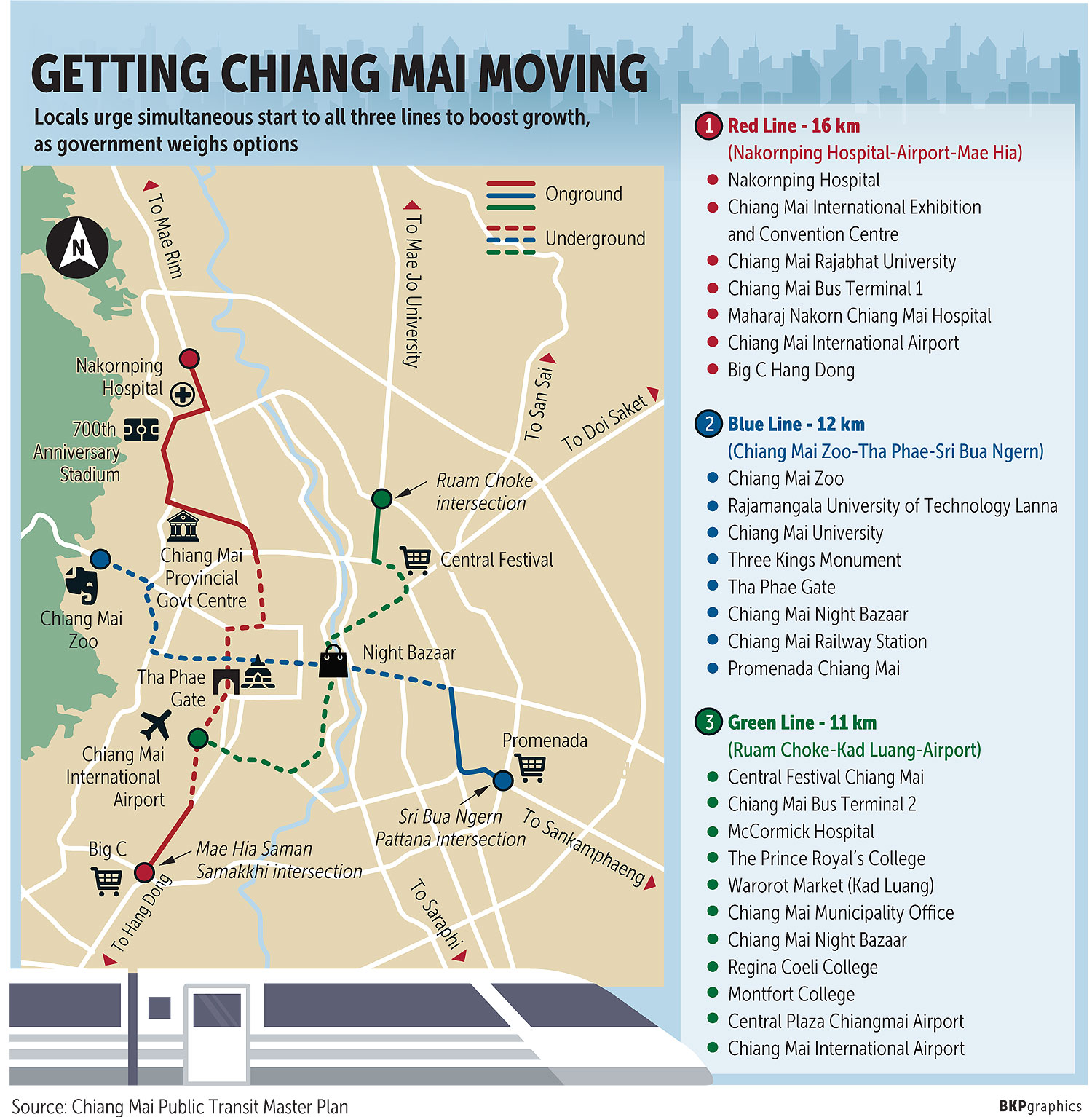 According to MRTA governor Pakapong Sirikantaramas, who was asked by the Commission for the Management of Land Traffic to oversee the progress of Chiang Mai's Red Line tramway, the internal rate of return for project stands at about 13% -- if fares range between 14-30 baht and given a daily average ridership of about 16,000. "With this rate of return, I believe the operator of Bangkok's skytrain as well as foreign investors will be interested in investing and expanding their businesses," Mr Pakapong said.

Under the proposed public-private partnership [PPP] model, he said, private investors are only required to invest in the installation of the signalling system and purchase the rolling stock -- which comes to about 5 billion baht. The other 22 billion baht will be provided by the government.

Mr Pakapong said he knows residents want the three tram lines built at the same time. However, he urged them to understand the government also has plans to develop electric rail routes in other provinces, such as Phuket, Nakhon Ratchasima and Phitsanulok.

The Red Line's feasibility study is expected to be completed by June, and Mr Pakapong expects the cabinet to approve the project by the middle of next year. "Construction should start in 2022 and it will last for about five years," he said.

The 16-kilometre long Red Line will run from Nakornping Hospital to Mae Hia Saman Samakkhi intersection in Muang district, and feature 16 stations. Seven of the 16 stations will be underground, said Mr Pakapong.