What the two men and their respective companies – one local, one international – have in common is that they have both seized onto investment opportunities arising from Thailand’s emergence as a global medical hub. Long famed for world-class hospitals that attract patients from around the globe, Southeast Asia’s second largest economy is now also becoming a key player in the $2.3 trillion global medical device industry.

For Mr Winit, that presented the opportunity to switch from being an unsung so-called original equipment manufacturer (OEM) for automakers to being the country’s only branded maker of higher-value sophisticated orthopedic implants used to replace damaged or diseased bones in human bodies.

For Dr McArthur, the expertise of the Thai health care sector and incentives made available by the Thailand Board of Investment (BOI) made Bangkok Genea’s base of choice from which to build a business in Asia, where many national populations – including Thailand – are aging and infertility among young people is rising.

In vitro fertilization is the process by which eggs are fertilized outside the body and in future, Dr McArthur says, the company may start to manufacture in Thailand some of the technologically advanced desktop embryo incubators and other devices the company has developed to improve the chances of infertile couples conceiving.

At present, the incubators, which Dr McArthur describes as “the closest we have come to mimicking the natural environment of a woman’s body”, are manufactured in Australia and distributed around the world by Merck, Germany’s oldest pharmaceutical company.

“We looked at other countries in Southeast Asia and even Europe, but for us Thailand was a no-brainer,” Dr McArthur says of Genea’s decision to invest there. “The BOI have been just wonderful in their assistance. Setting up a new business even in your own country can have its hurdles. But in Thailand, the BOI smooths a path for you.”

In 2019, the value of the Thailand medical device market rose to 176 billion baht (US$6 billion) – a 70 percent increase in the past decade, according to official figures from Thailand’s Office of Industrial Economics. Thailand ranks ahead of Singapore as the most important importer and exporter of such products in the ten-member Associations of Southeast Asian Nations (ASEAN), according to Krungsri Research, a unit of Japan’s largest financial services group, MUFG. Krungsri forecasts that the annual growth rate of Thailand’s medical device market will increase this year and in 2021 to between 8 and 10 percent.

Presently, some 600 Thai-based companies ranging from small and medium sized enterprises to international giants such as Japan’s Nipro and Hoya Optics manufacture and trade products ranging from simple disposable rubber gloves and bandages to surgical robots.

But it is the high-tech end of the industry that Thailand’s government has identified as one of the industries of the future – along with the likes of aerospace, artificial intelligence, biosciences and robotics – that will help it become the digital innovation hub of Asia. And to attract the most innovative companies in the field, the BOI is offering incentives that include exemption of corporate income tax for up to 13 years and so-called smart visas that enable key employees and their families to stay in the country for up to four years without having to obtain a work permit. “Increasing investment in Thailand by foreign producers of medical devices is being driven by the investment support policies of the BOI,” Krungsri Research analyst Narin Tunpaiboon wrote in his report. 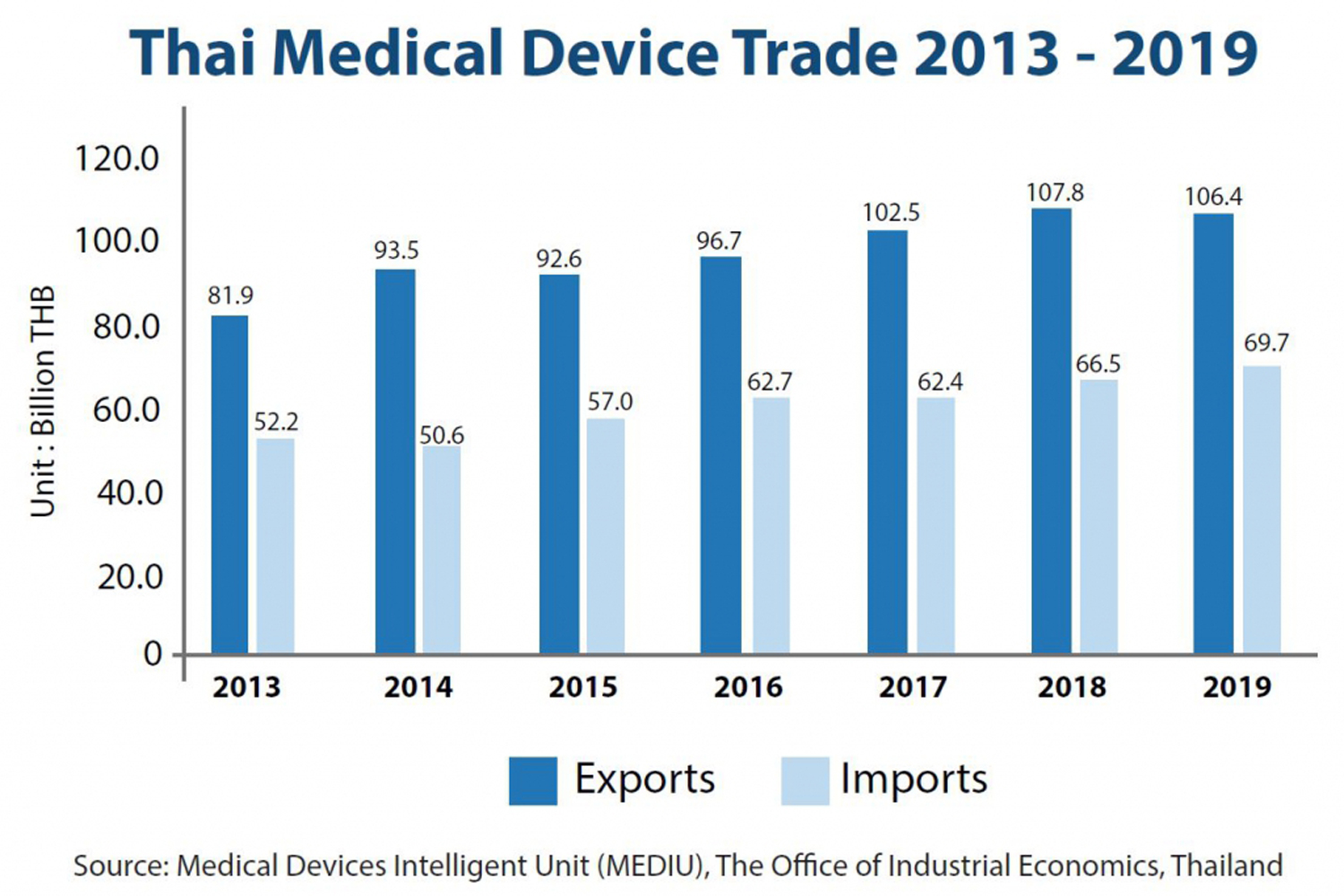 Investors are also attracted by Thailand’s proven track record in health care. The country was already aspiring for medical excellence back in 1927 when the present King Rama X’s grandfather, Prince Mahidol, graduated as an M.D. from Harvard University. Today, the country has a universal public health care system covering 99 percent of the 69 million population.

Thailand’s almost 1,400 hospitals and medical facilities with in patients facilities, 378 are private establishments, and more than 60 are accredited by the Joint Commission International, or JCI, the global arm of the main standards-setting body for U.S. hospitals.

That’s the fourth highest number of U.S.-accredited hospitals in the world outside the U.S. – and more than any other Southeast Asian country. Some 3.5 million medical tourists come to Thailand each year, according to official estimates. Those visitors spend close to $600 million, making Thailand the world’s fifth biggest medical tourism market, according to the World Travel & Tourism Council.

Late last year, Thailand’s health system gained further international recognition. At a time of intense global nervousness about rapidly spreading diseases such as coronavirus, Thailand ranked 6th out of 195 countries in the inaugural Global Health Security Index which measures a country’s ability to respond to epidemics, pandemics and other health emergencies. The report praised Thailand as “an exemplar” and noted it was the highest ranking middle income country in the entire survey. “The GHS Index shows that Thailand is, beyond a doubt, an international leader in health security,” the report said.

Ironically, another factor that is helping the health and medical sector is a demographic trend that would work against many other industries. Like many Asian countries, including China and Japan, Thailand’s population is aging. By 2030, the number of Thais 65 years of age and older will have increased from 11 percent to 18 percent, creating an even larger market for replacement hips, knee joints and all the other orthopedic devices entrepreneurs like former autoparts maker Mr Winit are manufacturing.

Mr Winit first had his “eureka moment” about such opportunities when he realized that, although car making would remain a major sector of the Thai economy, supplying OEM auto parts was becoming a crowded field. At the same time, he worked out that the machines his company were using to make car components could easily be adapted to manufacture much more profitable and niche orthopedic implants.

In 2002, Mr Winit founded Orthopeasia, Thailand’s first such manufacturer. Within five years, he was doing so well, and the Orthopeasia brand becoming so established, that he was able to close down his auto parts division entirely to focus exclusively on medical devices. He estimates the orthopedics market in Thailand is worth about $300 million. Most recently, as well as serving Thailand’s burgeoning hospital sector, he has developed a fledging export trade to countries as diverse as Israel and Nigeria.

Since its launch, Orthopeasia’s workforce has grown tenfold to 200 in three separate factories. Soon, it plans to create a single, larger integrated manufacturing center in Chachoengsao, one of the three Thai provinces that comprise the Eastern Economic Corridor, a high tech industrial zone outside Bangkok that is at the heart of Thailand’s digital economy ambitions.

Mr Winit, who does his own research and development, can create products so specialized that they can meet each individual patient’s requirements. Customer service goes even beyond that. “Our technicians work in major hospitals right in the operating room with the doctors, passing them the implants during operations,” Mr Winit says. “I’m proud that we are the only manufacturer in Thailand and that we can design and produce rarely used implants or equipment that could not be sourced from overseas.”

Meanwhile, Dr McArthur’s company, Genea, is a case study of how an international company’s decision to invest in Thailand has proved critical to its global growth. Originally named Sydney IVF and founded in 1985, Genea operated exclusively within Australia before opening a joint venture clinic, Superior A.R.T., in Bangkok in 2007. Ten years later, in partnership with Merck, Genea extended its presence in the Thai capital by opening a center of excellence to train fertility professionals from around the world in the newest technologies to help infertile couples conceive.

Genea aims to do more research and development in Thailand by linking up with local universities. “It is important to make money in business, but also to leave things better than you found them,” Dr McArthur said. That’s a view shared by Orthopeasia’s Mr Winit, who says that being Thailand’s only orthopedic implant company, he is able to supply implants in very small quantities that international suppliers would never be able to do. “No-one would import just four or 10 parts a year,” Mr Winit says. “But because we are here we can do that and help these people and society.”