A passenger at a check-in counter Suvarnabhumi airport. The arrival of 26.6 million tourists may be the best-case scenario this year. (Photo by Somchai Poomlard)

The tourism confidence index plunged to the lowest level in nine years, though the industry is optimistic about the final quarter of 2020, which could lead to a total of 26.6 million international arrivals this year, according to the Tourism Council of Thailand (TCT).

The survey was conducted Feb 20 to March 10, before some provinces imposed travel restrictions, but companies are bracing for a more extreme impact that will last longer, said TCT president Chairat Trirattanajarasporn.

The index polled 650 local operators, who assessed the glum prospects of the industry at 57 in the first quarter, a sharp drop from 98 in the same period last year, and lower than 88 in the last quarter of 2019.

Stable sentiment is usually reported as an index of at least 100.

Mr Chairat said Thai tourism has been hurt by both internal and external economic factors such as the US-China trade war since last year, when the soaring baht and PM2.5 dust pollution were the main worries.

According to the survey, the virus's impact on theme park business has been the most extreme, followed by tour operators and transport.

Restaurants, souvenir shops and entertainment venues are the most affected by the domestic economic contraction.

Operators in the eastern part of Thailand suffered the most, followed by the North and the South.

The fallout from the pandemic has forced 16% of tourism operators to plan layoffs in the second quarter to survive, considered the worst-case scenario. 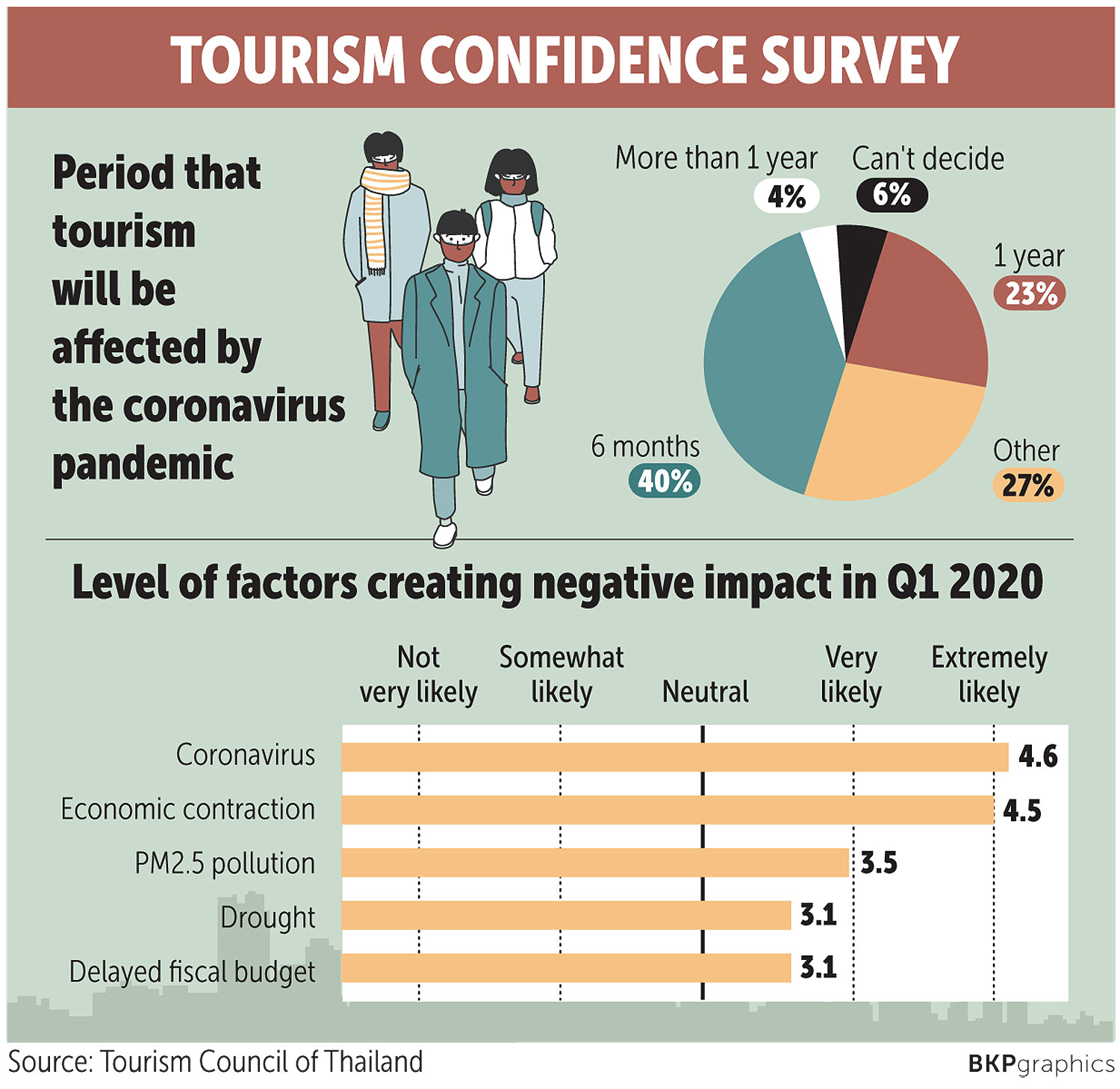 The TCT estimates that the actual rate of unemployment will be higher than the survey indicates, as Thailand is preparing to contain the deadly virus, which will extend the hibernation period for tourism to longer than six months.

During the first quarter, Thailand is likely to welcome 6.7 million international tourists, a drop of 38% year-on-year, with receipts in the quarter decreasing by 38.4% to 343 billion baht.

"If the containment is effective, operators are hopeful that Thailand will receive 26.6 million international tourists and generate 1.23 trillion baht in tourism income," Mr Chairat said.

These targets are 33.2% and 36.4% lower than last year, respectively, but are the best-case scenario.