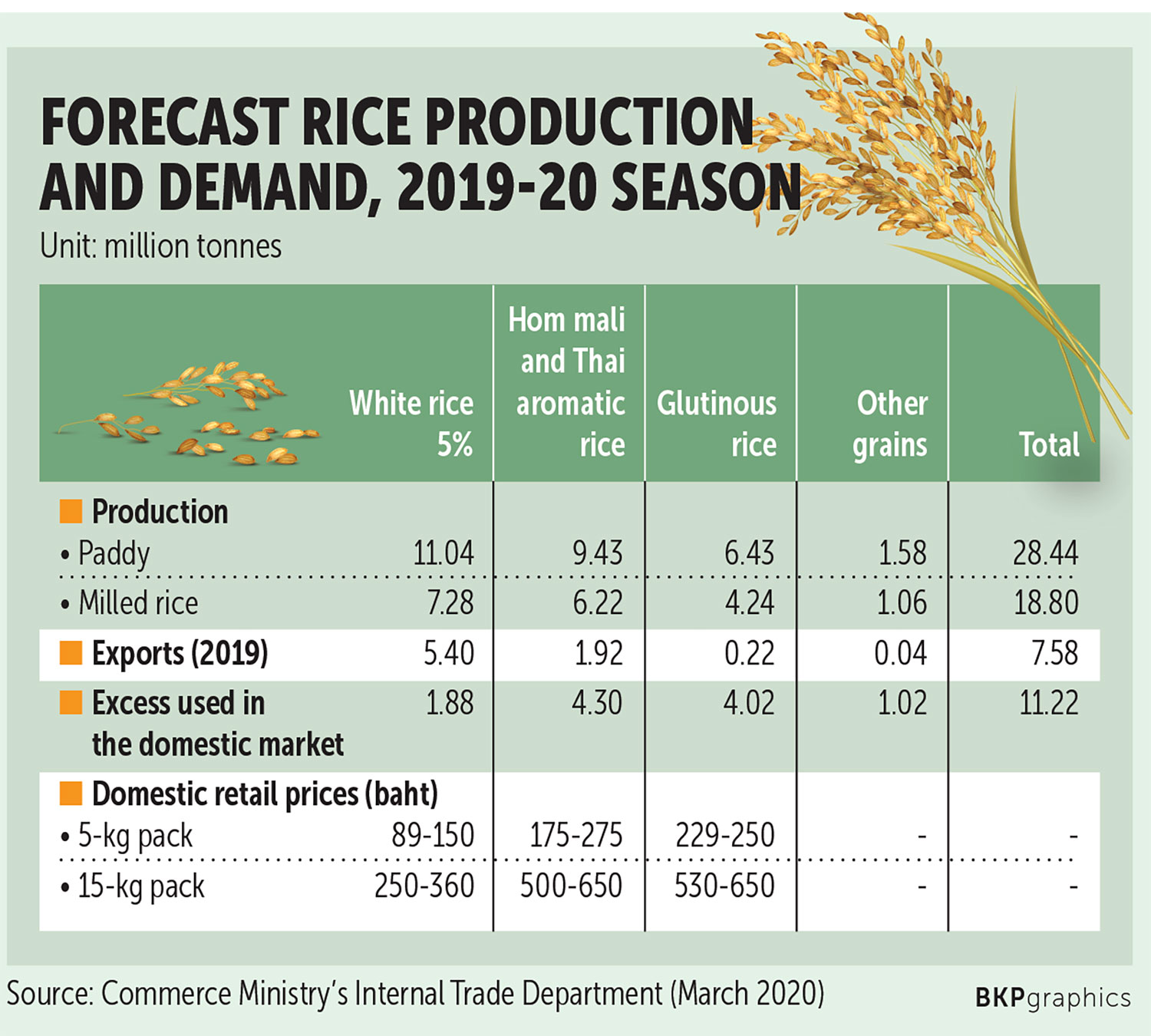 Pimchanok Vonkorpon, director-general of the Trade Policy and Strategy Office under the Commerce Ministry, said her office has been monitoring global rice markets during the pandemic, with many key rice exporters such as India, China and Vietnam halting shipments to ensure sufficient food domestically.

Ms Pimchanok said Thailand is unlikely to experience any food or rice shortages, as domestic consumer demand accounts for just 50% of total production.

"Exports represent only 32% of the country's rice production every year, with domestic consumption accounting for 50% and the remainder slated for inventory," she said. "If export demand increases and domestic consumption rises as more people stay home, a shortage is unlikely.

"Our existing rice stocks can accommodate domestic rice consumption for up to six months until the next annual harvest season. Nevertheless, the ministry has requested the private sector help maintain stocks to ensure adequate domestic supply."

Chookiat Ophaswongse, honorary president of the Thai Rice Exporters Association, said that with the spread of Covid-19 worldwide many rice exporters and importers like Indonesia, the Philippines and Singapore have beefed up their domestic food security, but Thailand shows no signs of limiting rice exports.

Since the widespread drought resulted in lower supply in the second crop production and global rice demand has surged because of the deadly virus outbreak, Thailand is unlikely to face a rice shortage, he said, adding that the country's rice production is more than sufficient for domestic consumption and for export.

"Thailand will continue exporting rice as usual, and we expect to be able to export 7-8 million tonnes this year," Mr Chookiat said.

"We should monitor the rice export policy of other countries in the second quarter," Mr Chookiat said. "If the country's export volume is later found to surge to 850,000 to 1 million tonnes a month, the government should start considering introducing a buffer stock."

Earlier, Mr Chookiat predicted rice prices to rise until the middle of the year as global consumers bolstered stockpiles, with China unlikely to rev up rice exports in light of the Covid-19 outbreak.

Global rice demand has surged since the virus outbreak, leading rice prices to increase by US$30-50 since early in the year.