Even the extravagantly wealthy are feeling the pinch from the coronavirus pandemic, as members of Forbes Thailand's 50 richest list saw US$28 billion erased from their combined wealth, an 18% decline to a total of $132 billion. 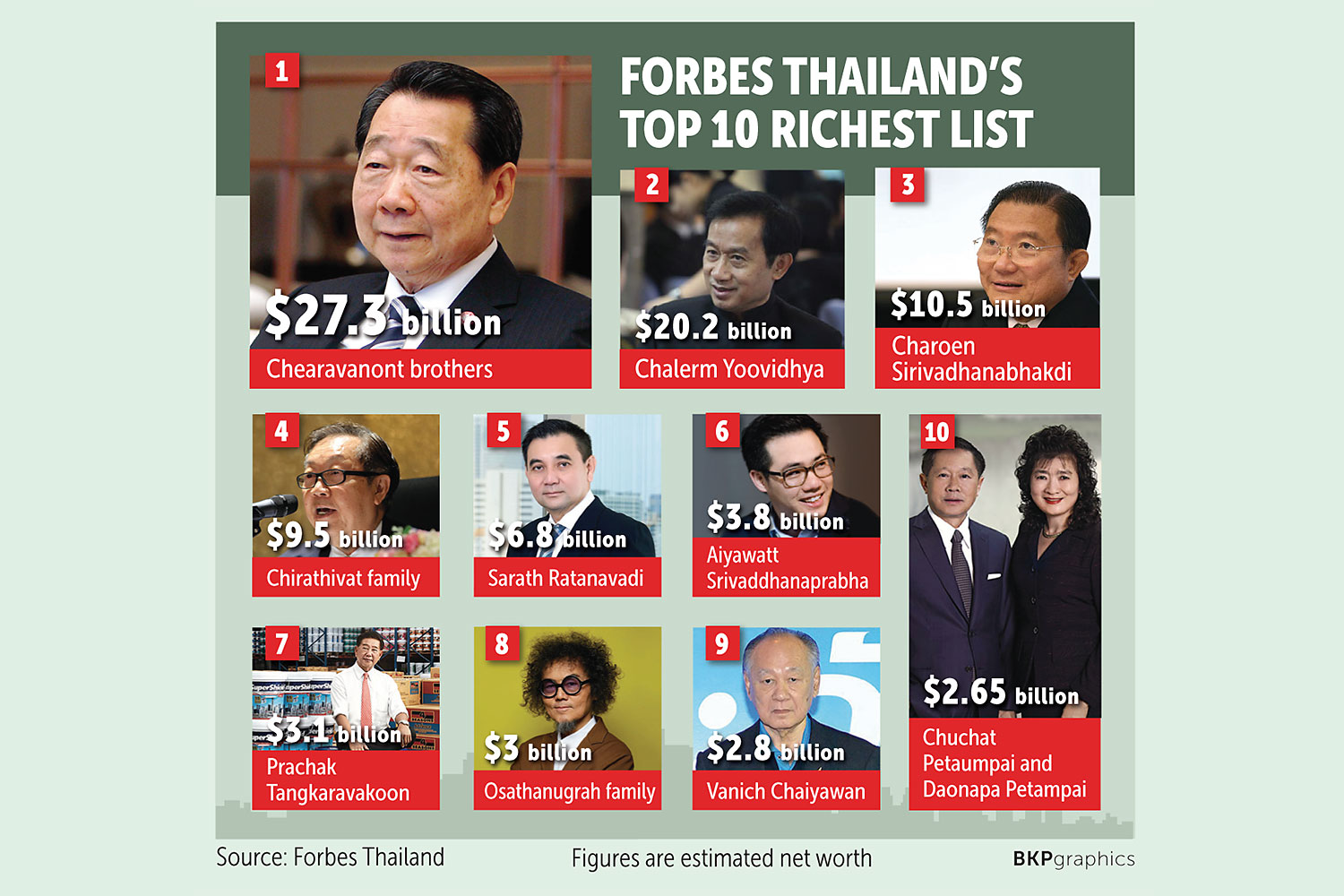 Despite the government's announcement of a $16 billion stimulus package, the benchmark stock index has fallen by nearly a third since April 2019, when fortunes were last measured. As a result, 38 tycoons on the list suffered declines in their net worth, including six whose fortunes shrank by more than $1 billion.

The Chearavanont brothers of CP Group, who in March successfully bid $10.6 billion for Tesco's Thai and Malaysian operations, retained the top spot but saw their combined net worth decline $2.2 billion to $27.3 billion.

Taking over No.2 is Chalerm Yoovidhya, who along with his family co-owns energy drink megabrand Red Bull. He was among the eight listed who managed to increase their wealth despite the broader rout. Eking out a modest gain, his net worth rose to $20.2 billion from $19.9 billion last year.

Charoen Sirivadhanabhakdi of Thai Beverage moved up to third with $10.5 billion, despite a decline in net worth from last year's $16.2 billion.

The Chirathivat clan, who listed their retail empire, Central Retail, in February in what was Thailand's biggest initial public offering (IPO), saw their wealth more than halve. They slipped to No.4 from No.2 with a fortune of $9.5 billion. With tourists and domestic shoppers now scarce, Central Retail's shares have fallen 27% below the IPO price when valuations were locked in and have fallen further since.

Indian-born petrochemicals tycoon Aloke Lohia (No.26) similarly took a big hit in percentage terms. Mr Lohia, who has been on an acquisition binge, saw his net worth reduced to $1.09 billion from $2.52 billion last year as shares of his company, Indorama Ventures, declined 57% in the past 11 months.

Despite the collapse of global energy prices, three of Thailand's four energy tycoons increased their fortunes. They benefited from their focus on natural gas and renewable power, in line with the government's goal to switch to cleaner fuels. Among them is energy magnate Sarath Ratanavadi, the biggest gainer in dollar terms, with a net worth of $6.8 billion.

Mr Sarath got a $1.6 billion boost as his Gulf Energy Development launched more gas-fired power plants and took on new projects, such as ports and roads.

The buoyant energy sector produced one of two newcomers to this year's list.

Wirachai Songmetta (No.40 with $585 million) made his debut after the November listing of his family's biomass power producer, Absolute Clean Energy.

Medical doctor Kumpol Plussind (No.38 with $610 million), founder of listed hospital chain Chularat Hospital, made a comeback after a three-year absence as the addition of two new hospitals helped elevate his company's shares.