Revenue down 40% in Q1 as arrivals dry up amid outbreak

A passenger terminal at Suvarnabhumi airport is temporarily closed as the number of international travellers plunges. (Photo by Wichan Charoenkiatpakul)

The Tourism and Sports Ministry has released first-quarter tourism revenue figures, reporting a decrease of nearly 40% to 335 billion baht, or 222 billion baht shy of the year-earlier level.

The impact of the pandemic hammered the tourism industry in the first three months of 2020, with all source markets facing the same setbacks to a different degree.

Russia, Britain, Malaysia and Japan ranked second to fifth, respectively, in terms of revenue contribution from tourists. All four segments saw decreases of less than 50% because travel had not yet stalled in January.

International visitors during the quarter numbered 6.7 million, down 38% year-on-year, with a dip of at least 4.09 million travellers since travel restrictions were imposed in March.

The figure for last month also showed a glimpse of further decline looming in the second quarter as more airlines and hotels close, bringing tourist numbers down by 76.1% to 830,892 in March. 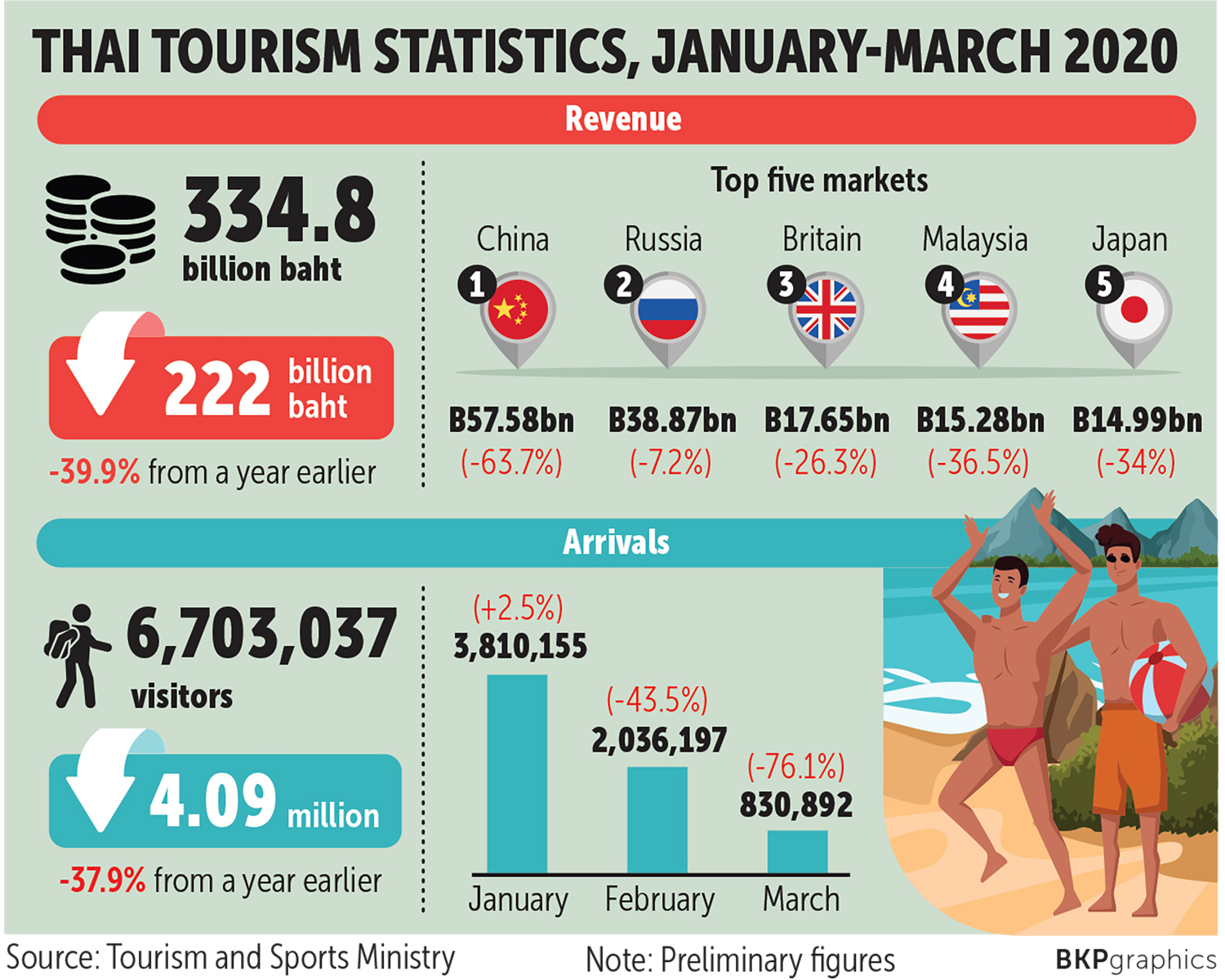 Tourism and Sports Minister Phiphat Ratchakitprakarn said the industry has not bottomed out yet and figures will deteriorate further in the second quarter, as all tourism-related activities have been put on hold and will not likely resume until the pandemic is completely under control.

Mr Phiphat said he will take a proposal to the cabinet for the Social Security Fund (SSF) to be allowed to help tourism workers by supporting 62% of their salary when employers shut down business without an official order from the state.

Surapong Techaruvichit, an adviser to the Thai Hotels Association (THA), said that while hotels in 13 provinces have been authorised to temporarily stop their services and will receive compensation from the SSF, a number of major destinations such as Bangkok, Chiang Mai, Chiang Rai and Rayong still have not received a similar order.

"The THA submitted a letter to Bangkok's governor requesting the authority issue an order to close down hotels, which the Bangkok Metropolitan Administration is scheduled to discuss in its agenda today," Mr Surapong said. "We're losing hope that the Centre for Covid-19 Situation Administration will order hotels nationwide to shut down, as some ministries oppose this."

Hotel operators are also saying some hotels that need to look after remaining guests should receive permission to continue necessary services to avoid affecting existing tourists while refraining from accepting new guests at this time.

Mr Surapong said the Defense Ministry is looking for hotels close to Suvarnabhumi airport for 14-day shelters for almost 10,000 Thais who have begun returning on repatriation flights.