Kitchen of the World takes stock

As the Covid-19 pandemic continues its gallop across the world, concerns have flared over food security in food-insecure countries and how export restrictions could compound health and social problems for vulnerable citizens.

With a reputation as the "Kitchen of the World", Thailand looks to be out of harm's way in experiencing a food security crisis or food shortage, even after locals earlier stormed supermarkets and hypermarkets to hoard commodities and other daily-use products.

But Thailand is set to bear the brunt of a logistics problem for food exports, as other countries have imposed lockdown measures to curb the viral outbreak in their own territory.

"Thailand has never had a history of food shortage or food insecurity, while food safety is another talking point," said Nipon Poapongsakorn, a distinguished fellow at the Thailand Development Research Institute. "Although commodity prices have edged up a bit on higher global demand, the main obstacle for Thai food exports is logistics, as many countries have imposed lockdown measures, especially the aviation sector."

For low-income earners, rising unemployment prospects and falling income present grave challenges, as there seems to be no end in sight to the virus outbreak.

Although a safety net for these people is returning to home provinces for agricultural production, the logistics lockdown and the difficulty experienced by informal workers in reopening their businesses are a double whammy for low-income earners against the backdrop of the pandemic, Mr Nipon said.

Some 27 million people registered for the government's aid scheme -- 5,000 baht a month each for at least three months. The Finance Ministry estimated that 9 million were eligible, according to the details of the third stimulus package where the money comes from.

As of April 14, 4.78 million were disqualified and 2.4 million has already received the money, prompting dozens of people to protest at the ministry amid an air of discontent. 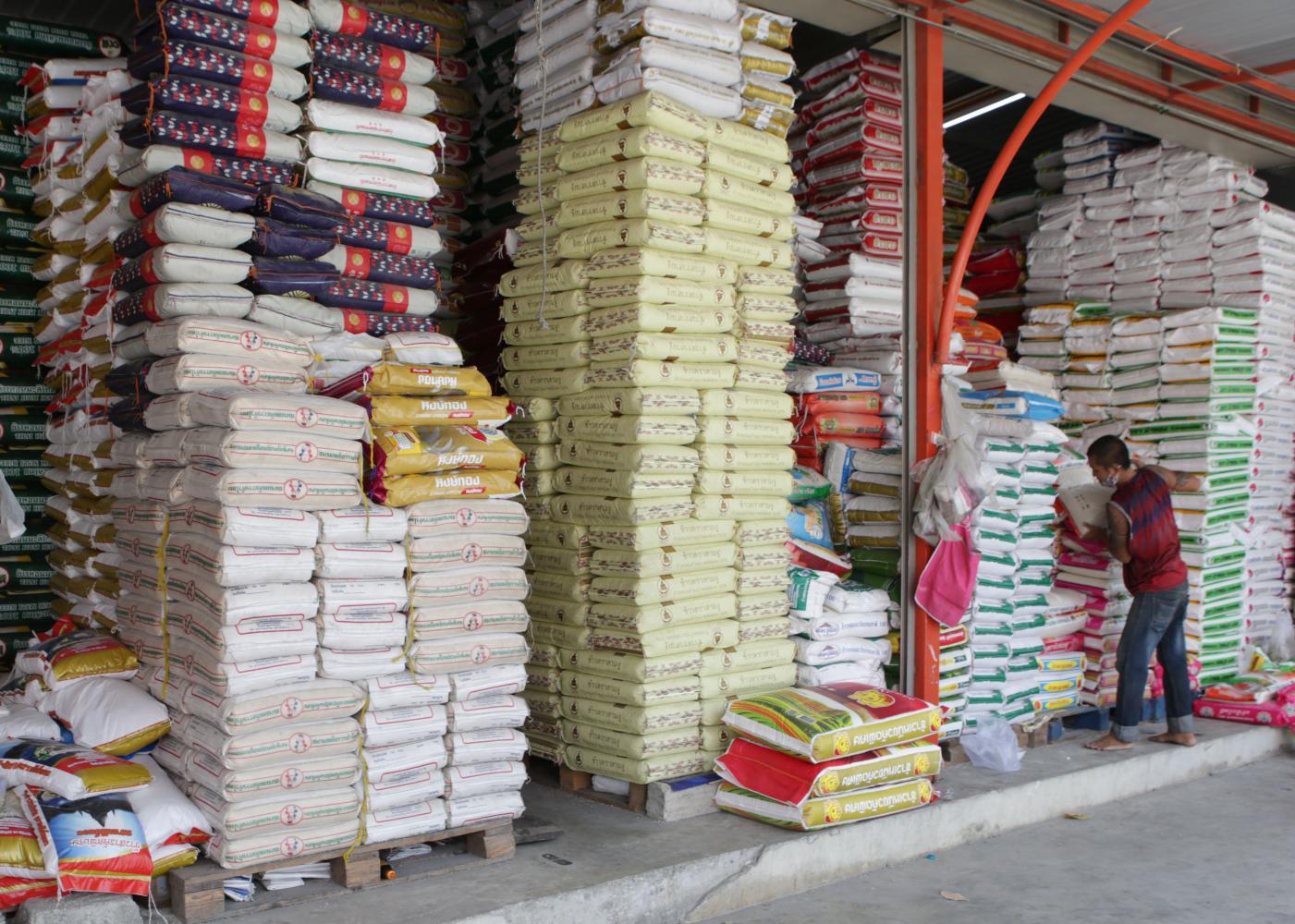 Rice produced by Thai farmers is stacked in Pathum Thani province. At the start of 2020, Thailand had 3.7 million tonnes of rice stocks. Apichit Jinakul

Visit Limlurcha, vice-chairman of the Thai National Shippers' Council (TNSC), expressed confidence that Thailand would see no food shortage in light of the escalating outbreak, since the country has an abundance of foods and boasts excess food production, with more than enough for export.

"Amid the Covid-19 crisis, rising concerns over the food shortage in many countries have emerged, resulting in a surge of food purchase demand worldwide," Mr Visit said. "We can reiterate that the country has enough food for both domestic consumption and exports. There is no need for hoarding. Last year we had sufficient food to accommodate up to 40 million foreign tourists. With fewer tourists projected this year, we can manufacture more than enough."

Thailand itself has encountered a similar logistic problem, as the country needs to import certain raw materials such as wheat.

Thailand is one of the world's leading food exporters, with rice making up the largest share at about 17.5%, followed by chicken, sugar, processed tuna, tapioca flour and shrimp.

According to Mr Visit, who is also president of the Thai Food Processors Association, Thailand's food exports, particularly to China, are likely to double in the second quarter, driven by a surge in demand after food stocks for the first quarter are depleted.

Despite a surge in food demand from China, the association forecasts Thailand's overall food exports to grow by 5% this year to $34.9 billion, or 1.02-1.06 trillion baht.

Mr Visit said it's fortunate the baht's value has weakened, allowing exporters to more easily negotiate to sell their products.

According to Mr Visit, Thailand's food exports this year are likely to shift production to supplying end-consumers instead of hotels and restaurants as in the past.

The drop in the value of food exports was attributed to weak global demand, the strengthening baht and declining world food prices. 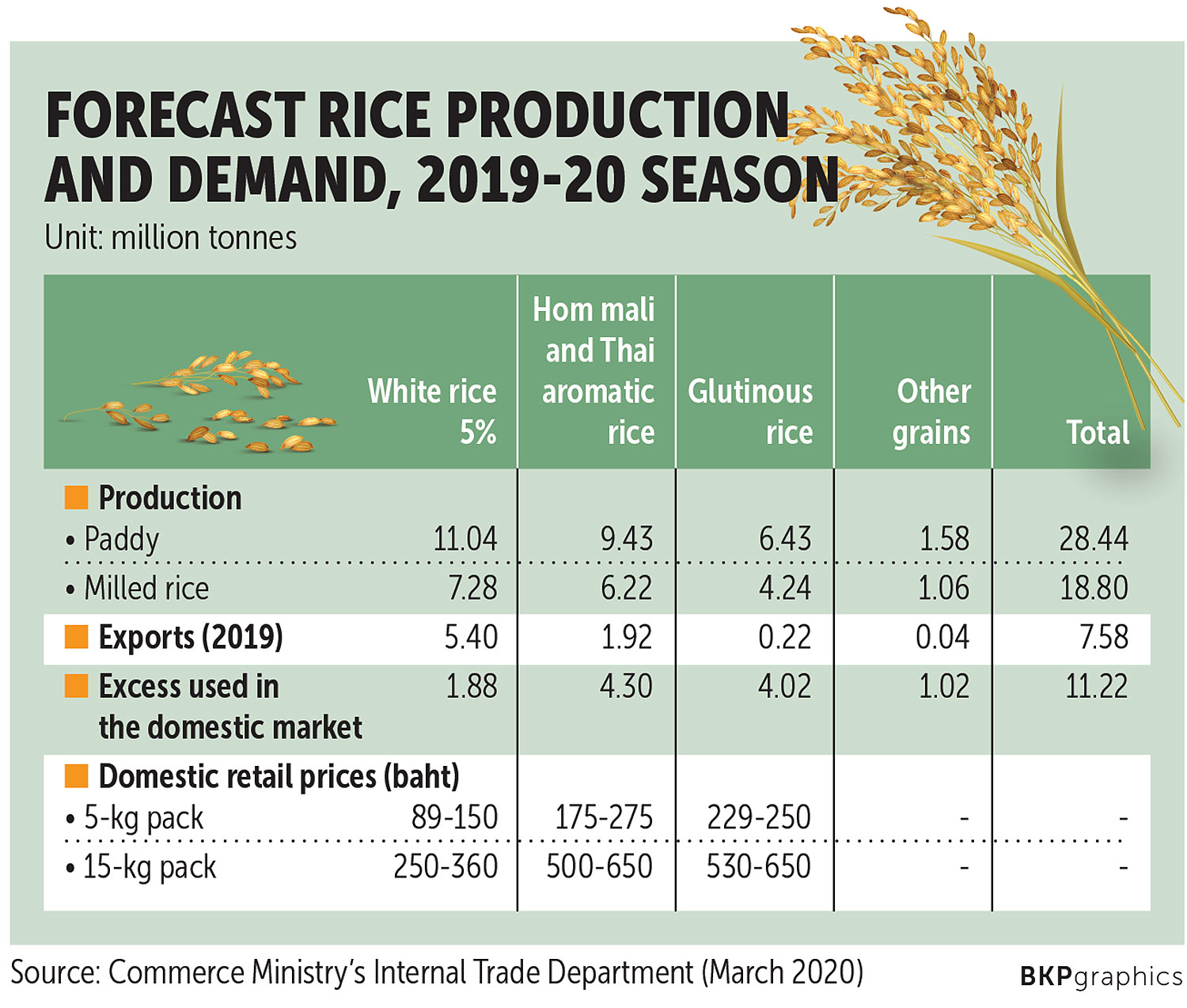 The rice price rally largely stems from export restrictions recently announced by some Southeast Asian countries and the impact of lockdown policies in numerous countries amid the pandemic.

"Despite growing food security fears worldwide, Thailand should not have plans to limit any rice exports," said Charoen Laothamatas, president of the Thai Rice Exporters Association.

"If the country's export volume is later found to surge to 900,000-1 million tonnes a month for three months in a row, the government should start considering introducing the export restrictions," he said

According to Mr Charoen, this period is considered a golden opportunity for farmers to sell their paddy and help boost the local economy.

But he urged the Internal Trade Department to check existing stocks held by exporters and millers, as well as farmers' rice barns; keep monitoring stocks every month; and closely cooperate with the Agriculture Ministry to evaluate the annual rice production.

At the start of 2020, Thailand had rice stocks of 3.79 million tonnes, the world's third-largest supply after China and India, according to Mr Charoen. 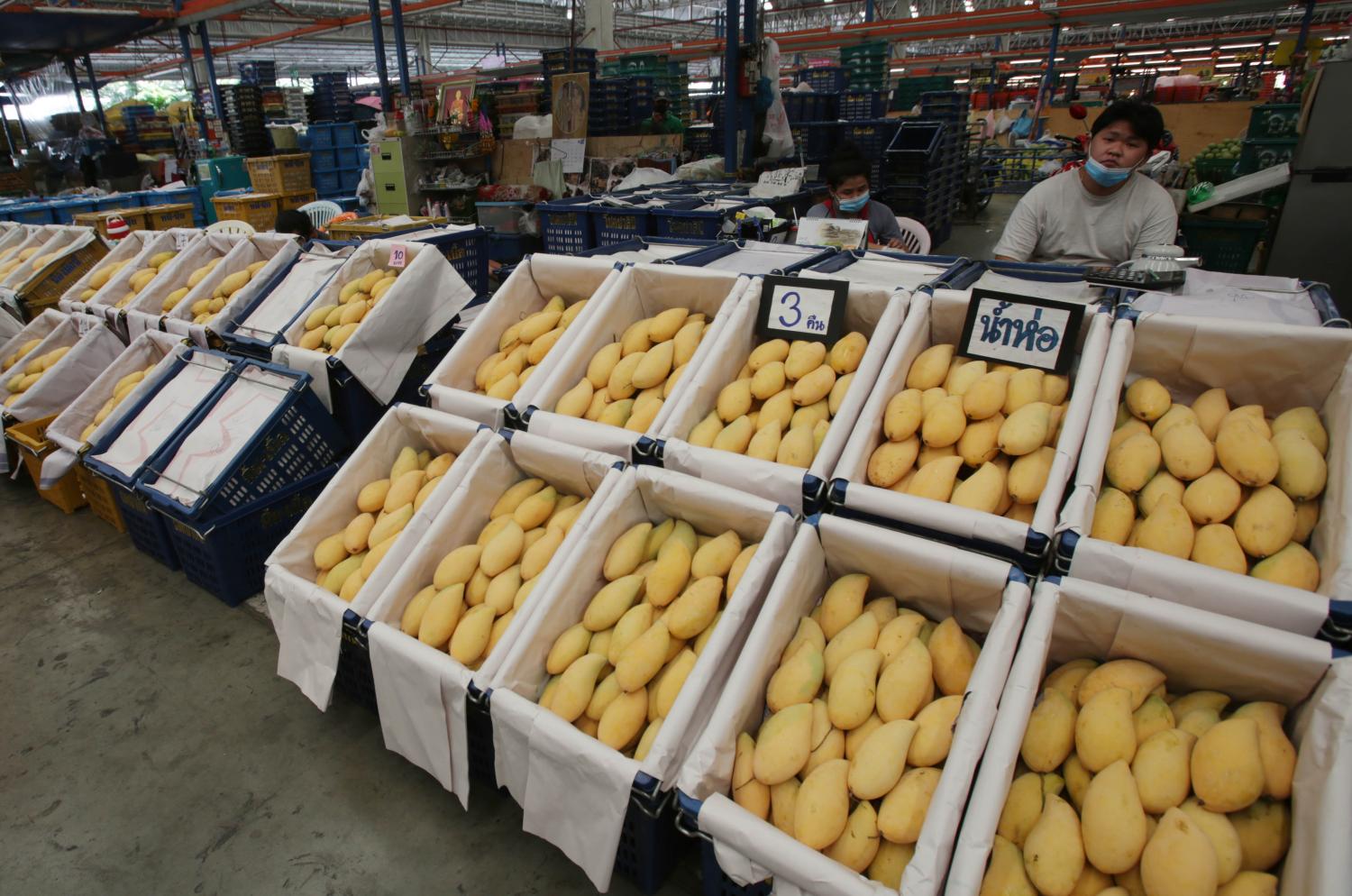 Fresh fruit for sale at a local market in Pathum Thani. Apichit Jinakul

Somporn Isvilanonda, a senior fellow at the Knowledge Network Institute of Thailand, said the government should avoid measures to block exports and supply chains. Vietnam has introduced stringent measures to limit rice exports to 400,000 tonnes over the next two months.

India has a lockdown measure in place to automatically block rice exports, while the Philippines and Indonesia have higher demand to boost their rice stocks and safeguard against any excessive rise in domestic rice prices.

Thailand will not see any rice shortage now that supply remains bountiful, with 4 million tonnes in private stockpiles at the moment, he said.

"So this period is considered a good opportunity for Thailand to ramp up rice exports," Mr Somporn said.

Global rice demand has surged since the outbreak, leading rice prices to increase by US$60-70 since early in the year.

Hom mali fragrant rice, which is regarded as a premium-grade grain, has seen a slight increase in export price, up 1%, Mr Somporn said, indicating that the well-off have less income and global consumers are shifting to lower-quality rice because of economic constraints.

"The Covid-19 outbreak is believed to be driving the unemployed back to their domiciles to grow rice," he said. "Higher rice prices will also entice farmers to beef up their rice plantations. What is worrisome is that next year's production is expected to dramatically increase, and this may affect rice prices next year."

Mr Somporn cited projections by the US Department of Agriculture that the world's milled rice stocks are as hefty as 172 million tonnes this year, with about 80% or 115 million tonnes controlled by China.

"The Agriculture and Cooperatives and Commerce ministries should come up with a more proactive approach for fruits," he said. "During this massive supply season, the government should come up with measures like sending fruits such as mango and durian as a get-well gift to China. This is not only good for the Thai image, but also paves the way for fruit exports to China in the future."

Apart from food security, the government should use the crisis to speed up upgrading farm products and developing water resources and farm-related knowledge, Mr Somporn said.

The Agriculture and Cooperatives Ministry should rev up transforming the farm sector by recruiting younger generations who are unemployed in the wake of the pandemic to develop supply chains and handle farming to make safe and environmentally friendly food, in lieu of aged farmers in the villages with the government supporting low-interest loans, he said. 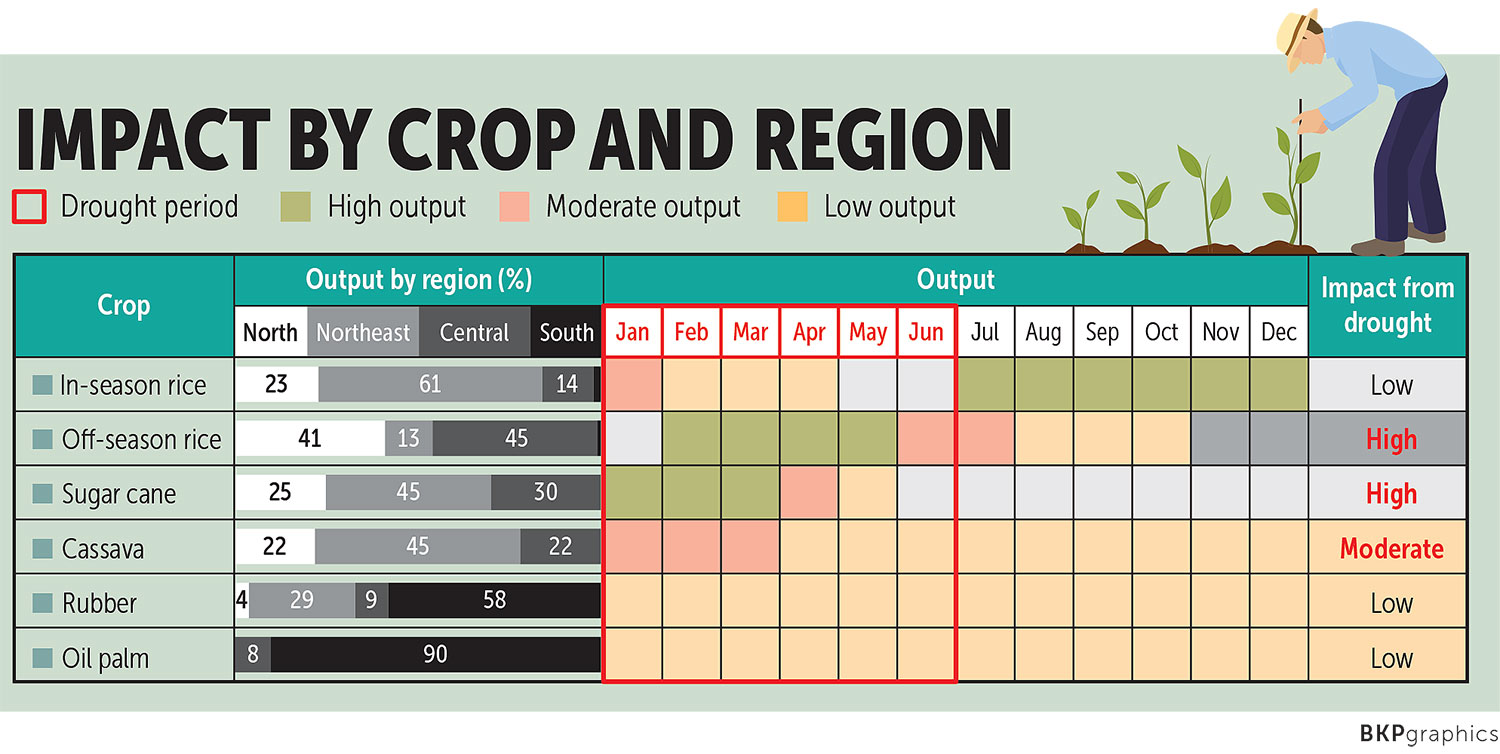 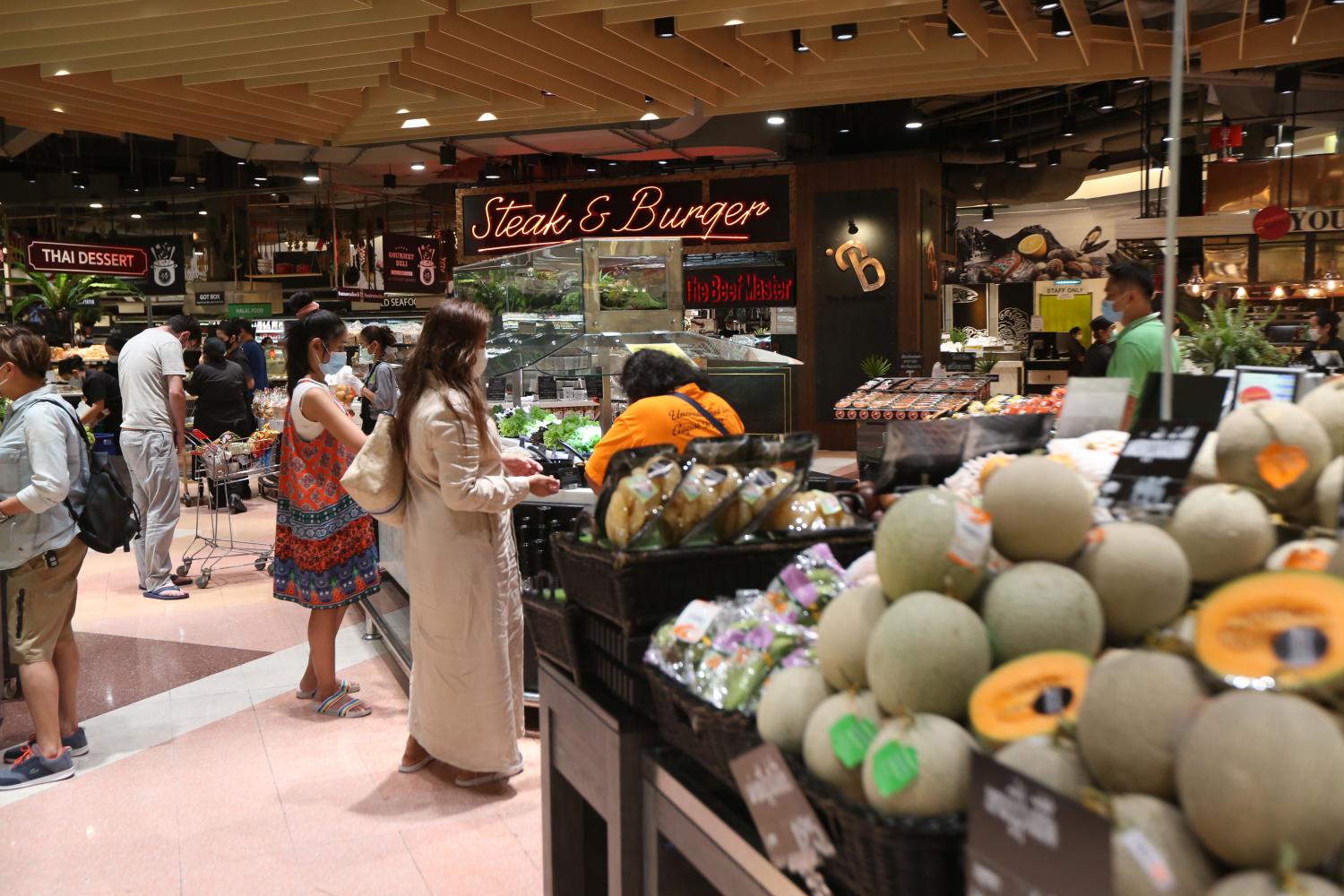 Shoppers browse consumer products at a The Mall department store supermarket in Bangkok after the capital has been in a soft lockdown due to the coronavirus outbreak. Varuth Hirunyatheb 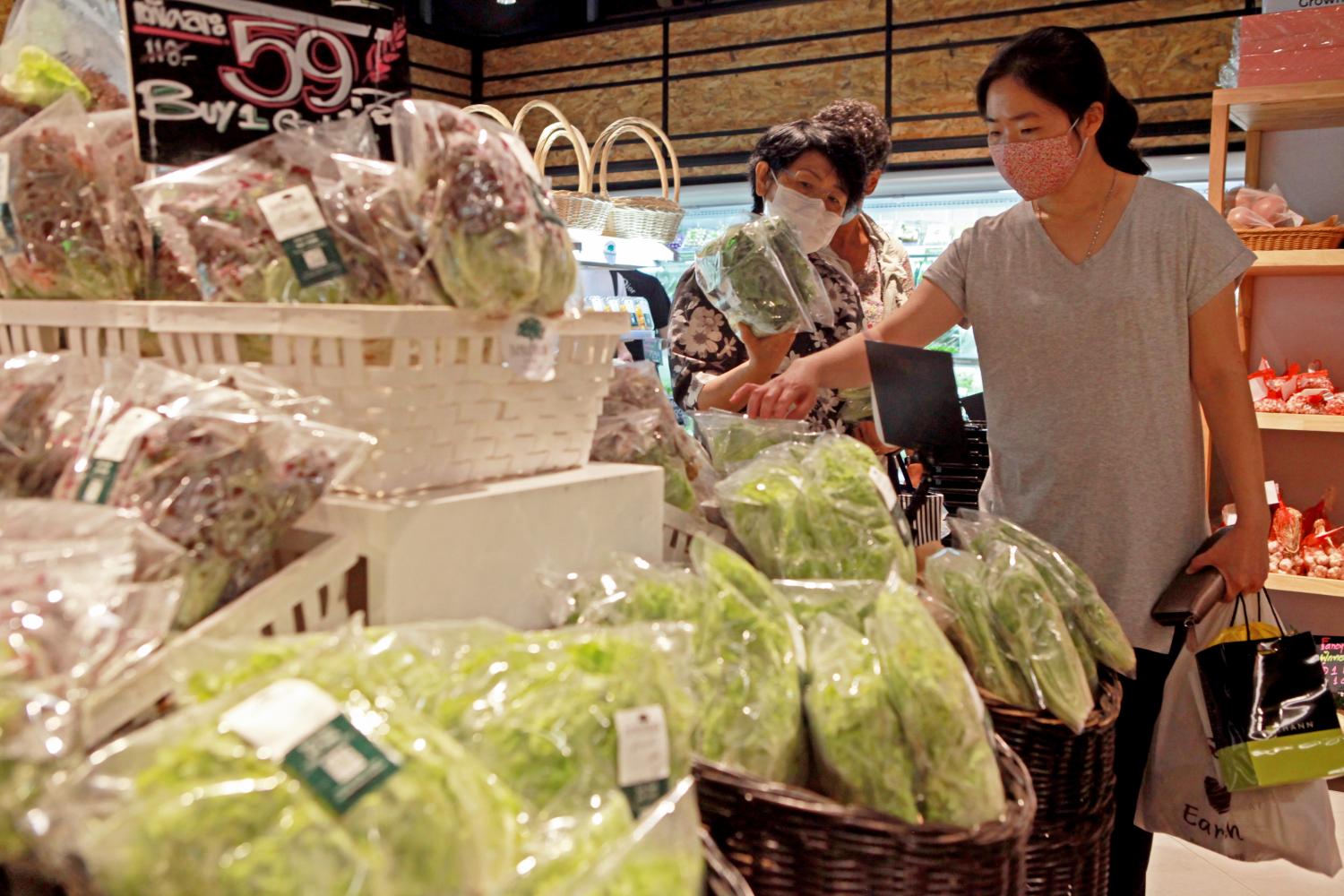 Shoppers wear hygienic masks as prevention of Covid-19 while shopping at a supermarket. Arnun Chonmahatrakool