Restaurants are adjusting menus and prices to adapt during the pandemic

Delivery drivers for GrabFood wait to receive orders from restaurants at The Mall Bang Kapi. (Photo b Varuth Hirunyatheb)

Beset by high commission fees imposed by foreign food delivery apps, many local restaurants dealing with the pandemic have adjusted their menus for online orders, sought customers via social media and looked to local delivery apps.

A local web-based platform that signs up restaurants and provides delivery service, developed by new startup ShaRe, has recently emerged to address these pain points as it charges no commission fees during the pandemic.

"We are a new food aggregator startup, found at www.shareapp.co, that is an alternative for local restaurants and users," said Sanicha Laowiwatwong, managing director of pizza restaurant Basilico Pizzeria, one of the platform's founders. "We struggle with high commission fees collected by existing online food delivery apps that charge 30% per order while food profit margin is around 20%."

She said many food merchants she talked to said they can accept a commission fee of only 15%.

Unlike other food delivery giants, ShaRe gives the exact time for order and delivery.

For lunch, the order must be made before 9am and delivery carried out from noon to 1pm. For dinner, the order must come in before 3pm and food will be sent between 6pm and 7pm.

Users have to pay for meals and delivery fees directly to food merchants. To join the platform, restaurants must have their own driver partners. 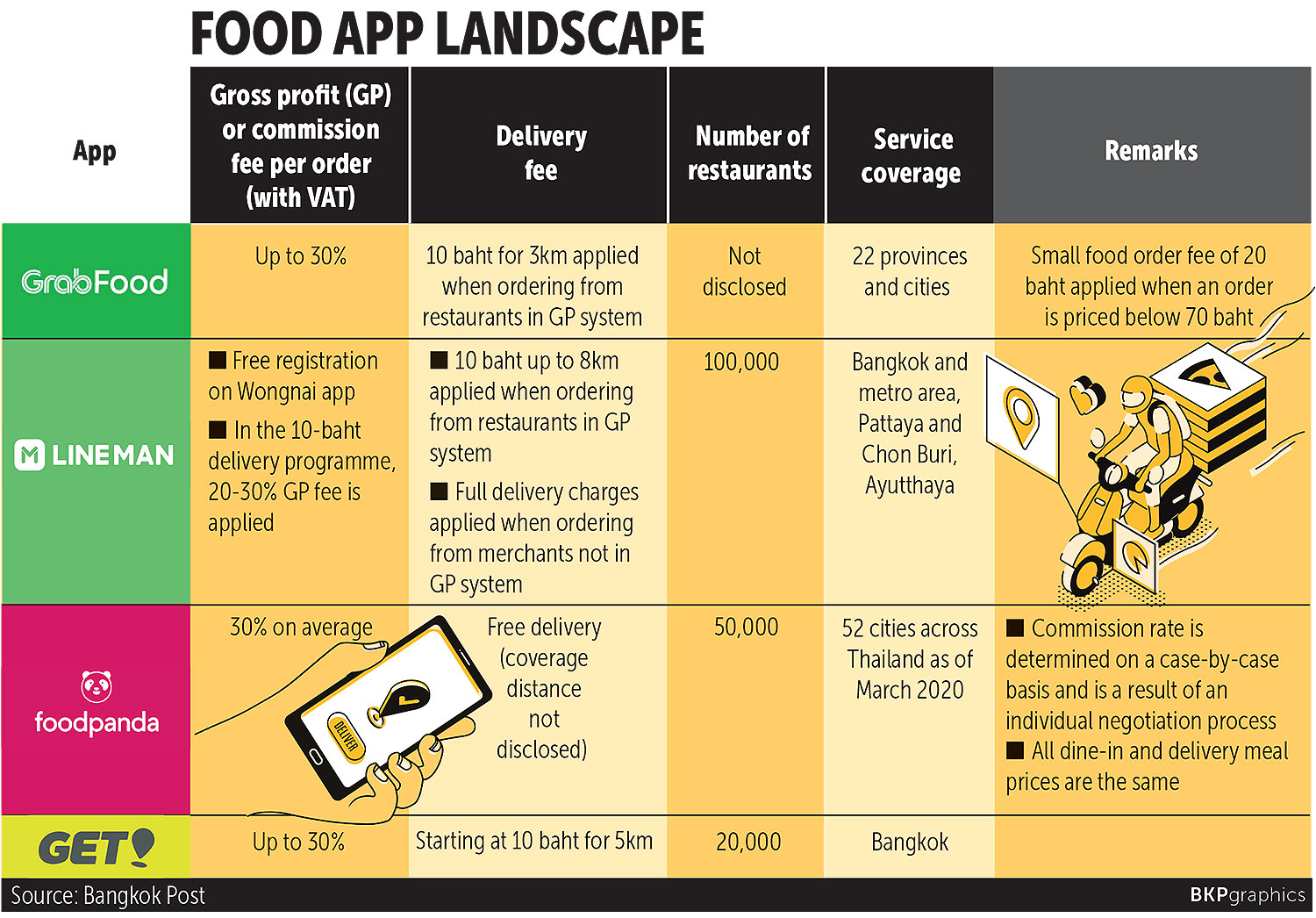 In the platform, restaurant locations are divided into zones from A to Q. "This makes it easier to manage and helps reduce delivery fees," Ms Sanicha said.

A delivery fee of 30 baht is levied for an order within the same zone, around 3 kilometres in radius.

She said no commission fee is collected during the Covid-19 period, to assist restaurant partners in this difficult time. A mobile app is planned to be launched within the next 2-3 months.

The platform aims to tap merchants that sell via social media, such as Instagram and Facebook, and bring them into the community. More than 80 restaurants are active on the platform as of mid-April.

For Line Man, two programmes are offered to food merchants who can build their own virtual restaurants via the Wongnai app, its partner.

For the first, no commission fee, also called gross profit (GP), will be collected from restaurants. Line Man earns partly from delivery fees and advertising fees if merchants want to be promoted.

For another option, merchants can join a 10-baht delivery fee scheme, which could drive traffic to their restaurants, but they have to pay a GP fee of 20-30%.

"Some players offer free or low-cost delivery services through subsidy but gain high commission fees from food merchants," she said.

It's hard for food merchants to add the commission fee to their food prices, she said, as this would affect buyer decision, while customers today compare prices with other restaurants or even prices between online orders and eat-in menus in the same restaurant.

During the crisis, Ms Sanicha said her restaurant has to adjust menus for delivery, such as a meal box priced 59 baht as well as other lunch set menus.

She said online orders accounted for 30% of her restaurant's revenue before the pandemic, and they cannot match earnings from sit-in services for which customers spend an average of 850 baht per person.

Another food merchant in Bangkok's Lat Phrao area, who asked not to be named, said different food app players come up with different policies for business.

For Grab, merchants are allowed to make their food prices sold online different from eat-in, while Foodpanda mandates that merchants set online and offline food prices the same, which could benefit customers but jeopardise merchants. 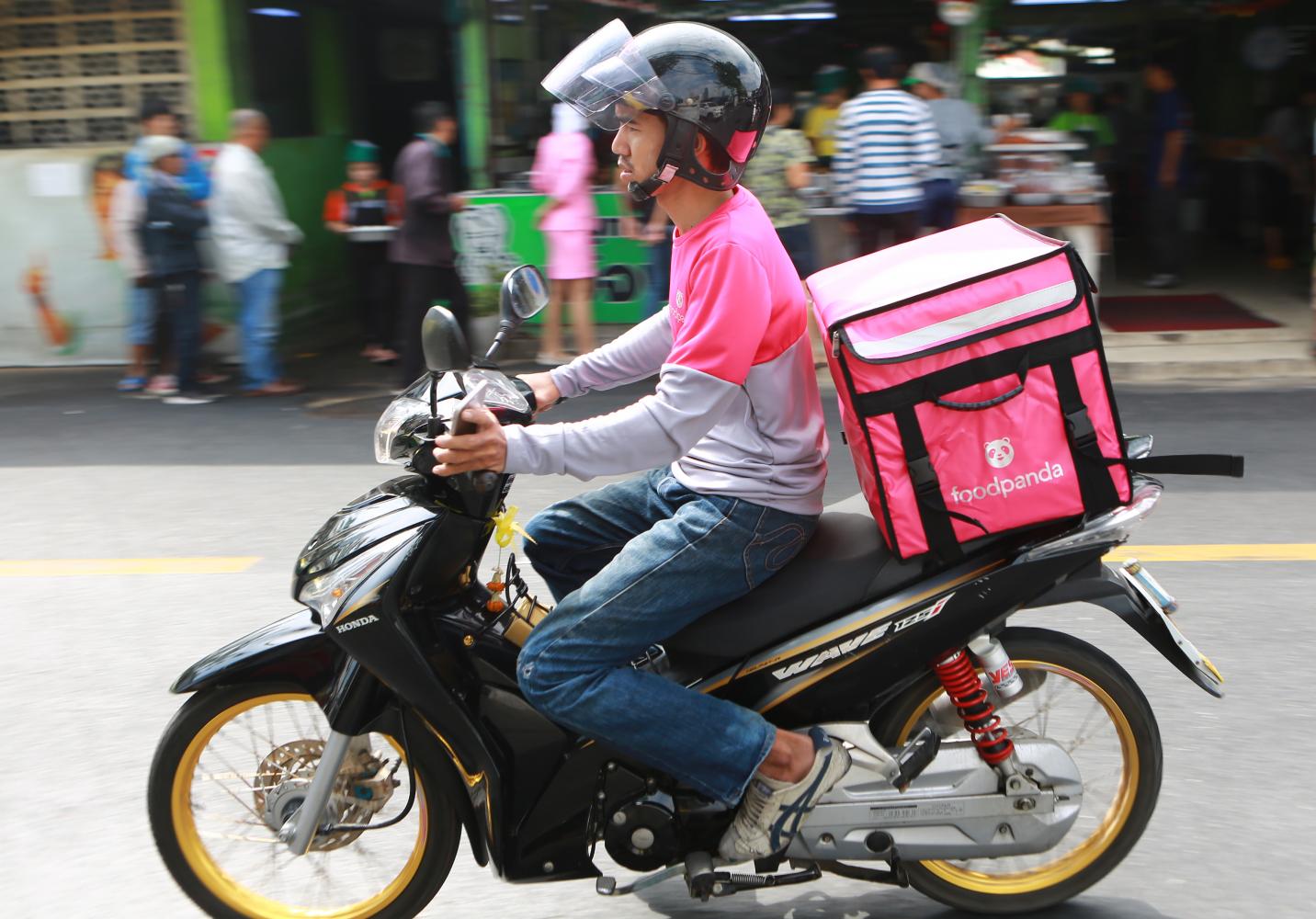 A food delivery man drives to pick up food after receiving an order via Foodpanda app. A fee of 30-35% is collected by Foodpanda. Somchai Poomlard

Paniti Vasuratua, third-generation owner of Bharani, a Thai restaurant in Sukhumvit Soi 23, said the Covid-19 crisis is one of the most critical challenges the restaurant has faced since it opened in 1949, as its dining space has to be closed.

He said his restaurant has to provide a variety of box set menus and frozen food, while services will be more focused on breakfast and daytime.

It also provides a special delivery service by limousine with gloved drivers for customers who may be concerned about hygiene through bike delivery.

Mr Paniti said he also focuses more on sales through the shop's Facebook page and Line official account (OA) with promotions, such as buy one get one free, when customers make an order directly to the restaurant.

"We try to rely on ourselves by communicating and attracting customers to order directly with us rather than making an order via food apps which have high GP fees," Mr Paniti said.

His restaurant faces a commission fee of 37% collected by Foodpanda, while Grab charges 30%.

Mr Paniti said his restaurant started using a food delivery app a few years ago, starting with Food by Phone, which was later acquired by Foodpanda.

It helped reach out to new customers, including foreigners and expats, which later encouraged him to apply for more food apps.

Before the outbreak hit, online orders made up 15% of Bharani's revenue. During the Covid-19 crisis, the online channel has become the mainstream for earning, he said.

However, as the restaurant focuses on its own online sales channels, including Line OA, these have become the major source of earnings, surpassing orders from food apps. 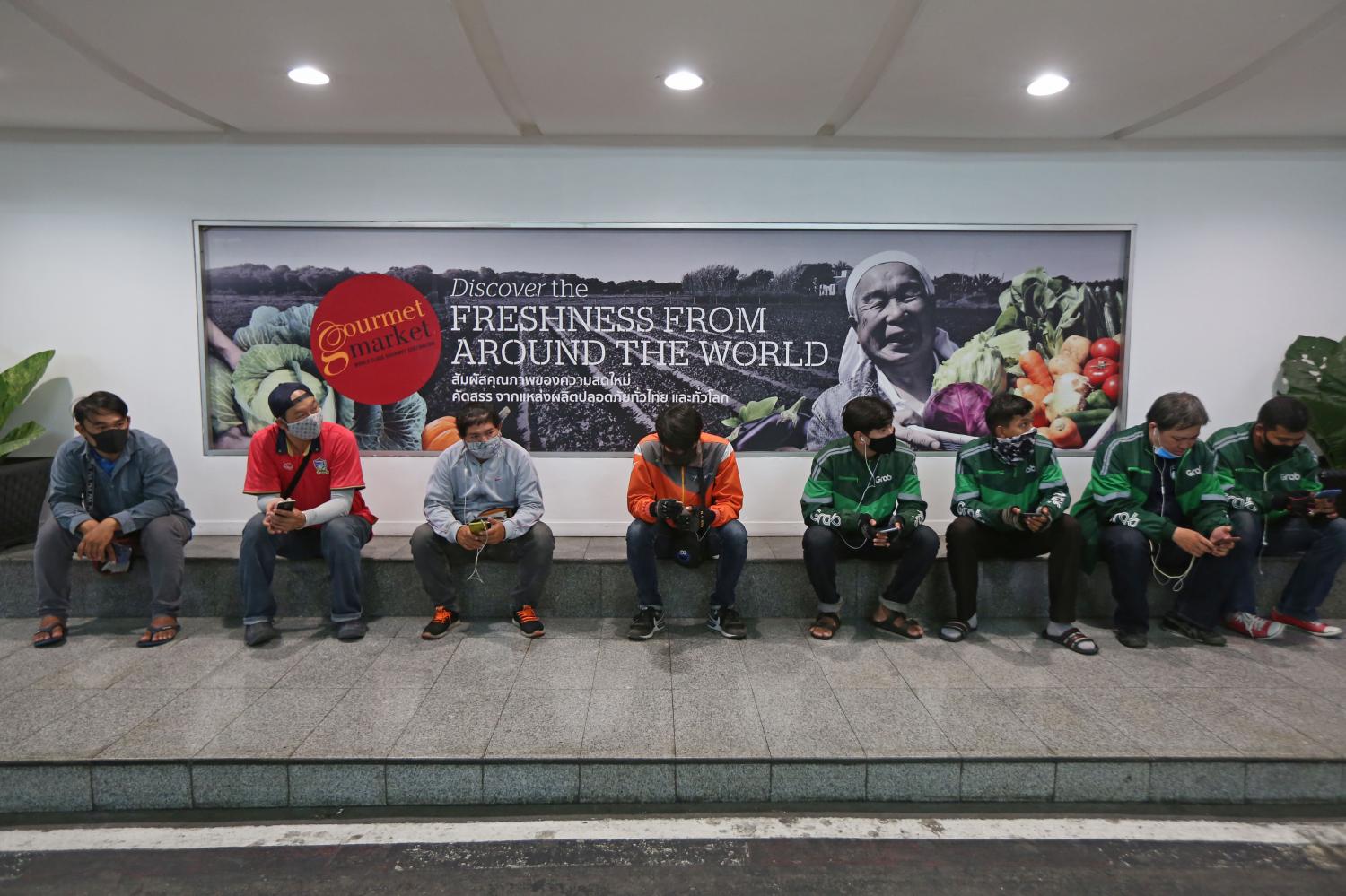 A group of delivery boys from various companies waiting for foods from restaurants. Varuth Hirunyatheb

Chainarong Ratisarn, manager of Siah- Ducknoodles restaurant on Rama IV Road, said his sales dropped 50-60% since the shop was unable to provide eat-in services and online sales cannot offset those from dining in.

He said online food delivery carries some limitations, as some dishes could lose taste when the long delivery is carried out.

"Merchants have to adjust menus and prices that fit with such constraints and order behaviour," Mr Chainarong said.

His restaurant provides service via several major food apps. He said he received poor service from one app, which failed to update the closure time for delivery upon the curfew, which subsequently upset customers who made orders and drivers who had to waste time.

"We are now trying to promote menus on our Facebook page and use our motorbikes to deliver food to our loyal customers," Mr Chainarong said.

Grab gains profit from car-sharing service, while food delivery business is in the fast-growing mode.

In 2018, Grab saw a loss of more than 700 million baht, Mr Tarin said. The loss doubled last year as the company expanded the GrabFood business.