A view of the deserted Pathumwan intersection during the soft lockdown in the capital. Apichart Jinakul

In one month, working from home has turned from a luxury for many office workers in Thailand to a necessity.

While the transition is hampered by buggy video conferencing programmes, missed communications and unanswered emails, some office heads like the new concept, saying it can actually increase efficiency and keep workers happy.

In the US, only 29% of people can work from home. In Thailand, with a less digitised economy, that percentage is likely lower. While so many are out of work or putting themselves at risk of infection as front-line workers, a sliver of the workforce gets the privilege of safety and a paycheck.

According to Punyanuch Sirisawadwattana, country manager of Robert Walters Thailand, the work-from-home concept was not particularly popular among Thai offices and employees. But the outbreak has jump-started the trend in the country.

“People and offices need time to adjust to working from home,” she said. “I suggest having virtual lunches and other informal meetings in order to maintain social relationships in the office, while having at least one standing meeting a day to know what everyone is doing with their work.”

Ms Punyanuch said the arrangement could lead to more efficiency, but not every employee is cut out for working from home. They need self-discipline.

Companies must adjust to online-only communication and completely modernise and digitise their operations, she said. Companies with dated legacy programmes their employees cannot download at home will finally have to switch to modern ones, while technophobic employees will need a crash course on teleconferencing and other necessary tools. 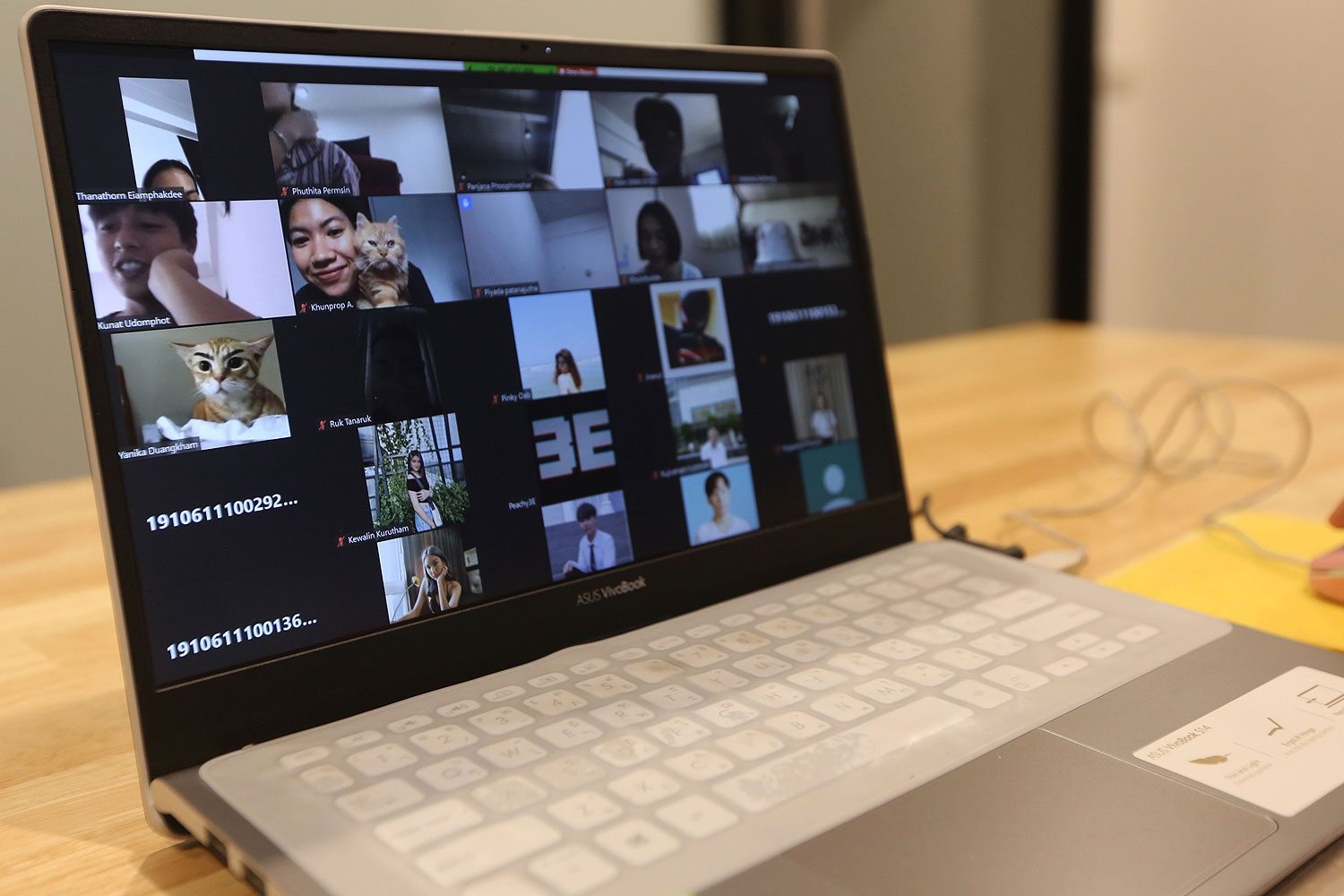 The outbreak has led to use of Zoom cloud meetings across the country. Wichan Charoenkiatpakul

EVERY HOME AN OFFICE

True Digital Group has achieved a 100% work-from-home rate for its roughly 1,000 employees. Siriwan Thongluang, director of human resources at the group, said the office has never run more efficiently.

The company was prescient in shifting its workers to homes since the start of the outbreak in January, moving 50% to home offices at first, then 70%, then 100% when the shutdowns began in March. The human resources team worked closely with the operations team to ensure employees had the right equipment, programmes, microphones and internet access for a seamless transition.

“Before we had to account for the time it took to move to the next meeting room, then wait for the other group in the room who may not be done with their meeting on time,” Ms Siriwan said. “Now working from home we can operate meetings with high discipline, including back-to-back online, and to me it’s more productive.”

Despite the obvious distractions like children or Netflix, employees working from home save a few hours a day from a commute in heavy Bangkok traffic.

Even before the coronavirus outbreak, True Digital encouraged employees to “work from anywhere”. The company also has its own proprietary video conferencing application.

“The concept of how we work is very digital and about working from anywhere,” said Pakavat Nonkunakorn, head of operations engineering at True Digital Group. “The only struggle is how to communicate across the team.”

He said the company is holding almost the same amount of meetings as usual, just online. A variety of web tools help keep track of employees and assign tasks, including GSuite and True Connect (proprietary True software for HR work). Working from home has paid off so far, as no employee has contracted Covid-19.

True also uses Eko, a chat and office management app created by Korawad Chearavanont, the heir to Charoen Pokphand Group, True Corporation’s parent company. The company has attracted US$28.7 million, a fair amount of investment for a Thai startup.

Eko started offering its service for free to companies and individuals in late February, seeking to avoid the perception of profiting from a crisis. The hope is the situation will change companies’ attitudes about remote work.

“We hope this solution can enable companies to see that work does not need to be limited to the physical office,” said Bonnie Sananvatananont, global content lead at Eko. “Research shows people can be more productive in their own space by not wasting time travelling or being surrounded by distractions.”

A survey by Airtasker, a gig economy platform, found that employees working from home actually work an extra 1.4 days a month compared with office employees, while taking slightly longer breaks each day, 22 minutes versus 18 minutes.

To keep up employees’ morale, Eko hosts virtual happy hours where employees can socialise. It also offers “topic hubs” on its platforms for its workers to chat and maintain a sense of connection amidst the isolation of the quarantine.

Servcorp, an Australia-based co-working and virtual office services company, has pivoted completely to online and is seeing a boost in demand for remote organisational services.

With its three co-working locations in Bangkok closed for the shutdown, along with many of its other offices in major cities around the world, the company fortunately had an established virtual office business, one of the few sectors growing at the moment.

“We are really lucky to have something of value at this time that is really beneficial to our customers, offering a return on investment for us,” said Anna Chavez, general manager for China and Southeast Asia at Servcorp.

“I think the main concern for many businesses is cash flow. With one of the highest costs being rent, many are considering moving to a completely virtual office.”

The co-working industry is in real trouble right now, she said. The industry leader, WeWork, inflated a massive bubble, expanding as quickly as possible into high-rent areas. Even before the crisis, WeWork needed a bail-out; now, with barely any revenue coming in, it’s on the brink of collapse, possibly jeopardising the whole industry.

“I think we can ride out the WeWork bubble,” Ms Chavez said. “Even though the future of our business is virtual, we won’t move away from brick-and-mortar real estate.”

Not all businesses can have every employee work from home.

“We took an early step to have employees working from home in early March,” said Rob Candelino, chief executive of Unilever Thailand. “But our workers at factories cannot do that, so we’ve implemented the most strict social distancing requirements, having them eat metres apart from each other, disinfecting every surface and mapping out floors to provide areas to maintain social distancing.”

Unilever has transitioned all its front-line salespeople to online sales, retraining them, mostly shuttering its main office in Bangkok.

“Working from home can be difficult in the short term,” said Phensiri Santhiavongnusar, Thailand chief executive of logistics firm Acommerce.