Nine commercial banks have sought liquidity support worth a total of 56 billion baht for their purchases of mutual fund units through the Bank of Thailand.

Nine commercial banks have sought liquidity support worth a total of 56 billion baht for their purchases of mutual fund units through the Bank of Thailand's Mutual Fund Liquidity Facility (MFLF) as of April 24, according to central bank data.

The MFLF has already provided assistance to 30 mutual funds over the same period, the Bank of Thailand said.

The facility was announced by the central bank and related regulators in March after some mutual fund companies ceased redemptions for fixed-income funds following a sell-off triggered by growing concerns over the pandemic. 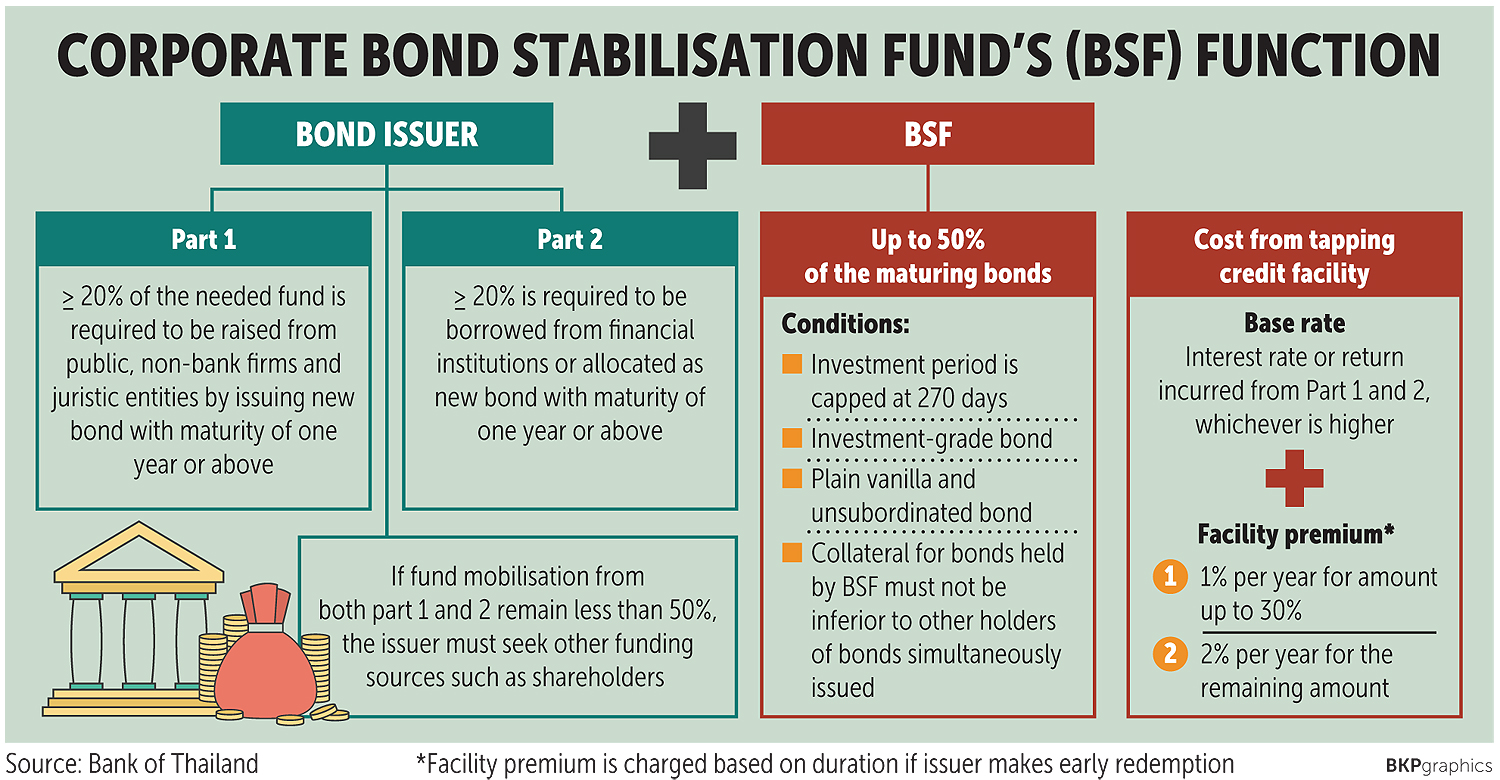 The special liquidity facility is aimed at maintaining stability in the financial system amid tight liquidity in the debt instrument market and unusual financial market conditions.

According to the credit facility requirement, commercial banks are allowed to purchase investment units in all money market funds or daily fixed-income funds affected by ailing market liquidity, but the central bank will repurchase only underlying assets that meet its requirements.

The Corporate Bond Stabilisation Fund (BSF), a 400-billion-baht bridge financing facility to help investment-grade corporate bond issuers that are unable to fully roll over bonds maturing during 2020-21, is limited to investment of up to 3% of the entire facility in each corporate bond issuer, and not exceeding 10% for each sector to diversify risks, said Vachira Arromdee, assistant governor of the Bank of Thailand.

The BSF is prohibited from investing in more than 10% of each company's financial liabilities.

The fund started operating on Wednesday.

The central bank initially estimated that demand for the credit facility would be insignificant as several companies can raise funds by themselves, she said. Loans from financial institutions are another option if they fail to mobilise enough funds, with the BSF as their last resort.

During May to June, 200 billion baht worth of debentures are due for redemption, of which 68% have a credit rating of A- or higher, 22% have a rating in a band of BBB+ to BBB-, with lower credit ratings making up the remainder.

Commenting on sentiment in the local bond market, Ms Vachira said investor confidence has improved from March, but the situation has not yet normalised.

"The BSF is a preemptive measure to curb bond market risks and build up investor confidence. The fund is a mechanism to sustain financial system stability, a key role of the central bank," she said.

Given that BSF functions akin to bridge financing, the fund's investment period will not exceed 270 days and companies that use the special credit facility will be charged a higher rate than the market to force them to seek other funding sources before tapping the BSF's facility, said Ms Vachira.

The BSF will charge the facility premium at 1% per year for up to 30% of the rollover amount, and 2% for the remainder, she said.

To be eligible for the BSF, corporate bond issuers have to raise at least 50% of the needed funding by themselves, of which no less than 20% each comes from issuing bonds to public and non-bank companies, and seeking financial institution loans or selling bonds to them. If they are unable to get at least 50% from either party, they must ask shareholders to provide the remaining funding.

Ms Vachira confirmed the BSF will invest only in investment-grade bonds with a credit rating of BBB- or above as its size represents 90% of the 3.6-trillion-baht corporate bond value, with most of it allocated to investors, mutual funds, the Government Pension Fund and provident funds. Non-investment-grade bonds account for a marginal portion and most are sold to specific investors.

If corporate bond issuers are downgraded to below investment-grade after participating in the liquidity facility scheme, the BSF is allowed to continue holding their bonds until maturity.

Qualified corporate bonds must be issued by companies listed on the Stock Exchange of Thailand or Market for Alternative Investment, with operations in Thailand. They must not be state enterprises and financial institutions.

Proceeds arising from the BSF scheme are prohibited to be used to repay debt early, lending to directors and shareholders, paying bonuses to directors or the top two executives, as well as dividend payments, except for payments announced before April 29.

To manage the BSF, a steering committee chaired by the permanent secretary for finance has been formed to set out investment and risk management policies, while an investment committee chaired by a deputy governor of the central bank has also been set up to undertake investment. Krungthai Asset Management has been appointed as the BSF's fund manager. Companies interested in applying for the special credit facility are required to submit the proposal 45 days before the bond redemption date.