Consumer enthusiasm should be healthy, but industrial use of IoT could lag. By Fitch Solutions

Thailand is among the more mature telecoms markets in Southeast Asia, and one of the earlier adopters of 5G technology in the region. We expect a gradual trajectory of adoption over our 10-year forecast period, driven by both the consumer and enterprise segments.

The market based on the LTE mobile standard is well-developed and penetration of services is high, meaning the transition to 5G will be commercially viable from an operator perspective.

While the government remains highly enthusiastic about the adoption of Industrial Internet of Things (IIoT) applications, a key hurdle will be the readiness of industries to adopt such technologies; use cases are still being explored and the level of infrastructure maturity, especially in fringe areas of the country, remains low.

Limited consumer 5G networks were launched in the 2.6GHz band by both True and AIS in February this year, while DTAC is planning to launch on the 26GHz band later in the first half and on the 700MHz band in the latter half of the year. However, coverage is focused only on commercial areas in downtown Bangkok.

We expect that network rollouts in other parts of the country will follow a gradual, progressive pace, for two reasons: first, operators are currently occupied with investing more resources in their fixed networks to support greater data traffic due to telecommuting amid the Covid-19 pandemic.

Second, the National Broadcasting and Telecommunications Commission (NBTC) requires that operators reach 50% population coverage in six major provinces within four years. As a result, we expect uptake of 5G to only pick up in 2023.

By the end of 2029, we expect Thailand to have 64.2 million subscriptions, accounting for close to 70% of the mobile market.

One of the requirements 5G spectrum bid winners must meet is covering at least half of the Eastern Economic Corridor (EEC) -- which encompasses Chon Buri, Rayong and Chachoengsao provinces -- within the first year of service availability.

The requirement suggests the eagerness of the government to increase adoption of 5G applications in the target industries of the EEC, which include the automotive, food-processing, medical tourism, aviation and logistics sectors. Operators and equipment vendors will likely find strong opportunities to roll out use cases here.

In the country's large automotive sector, we believe that 5G can be used for inventory and supply tracking on production lines, as well as for robots on the production line to enable a higher degree of automation and fewer points of possible failure.

Similarly, 5G can be deployed on food-processing lines for better identification and tracking of spoiled items, for instance. 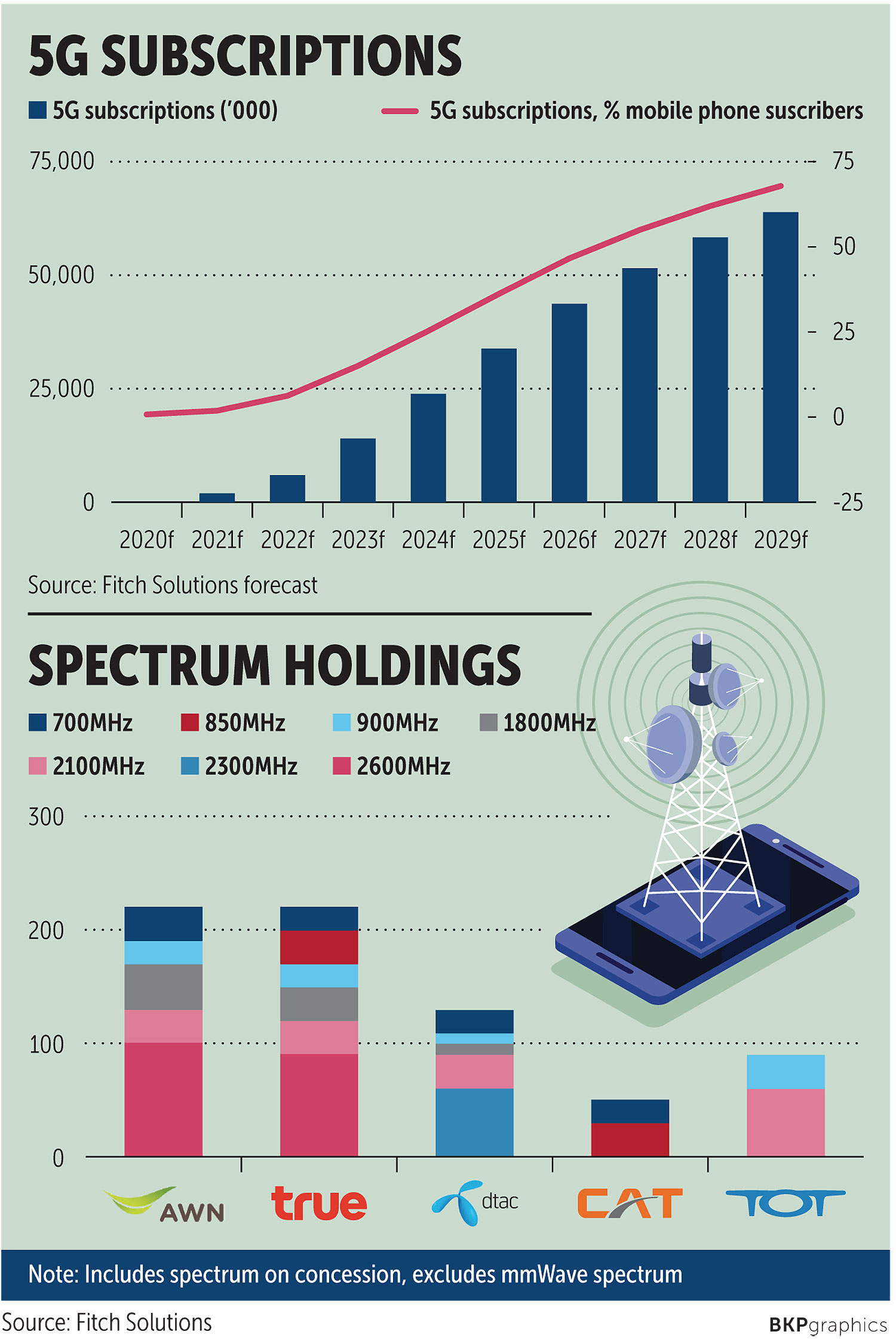 Outside of the EEC, 5G can potentially be applied in the agriculture sector. Operators are already looking at this area, with DTAC launching its Precision Farming Service in 2017, while True has been working with CP Group on agricultural monitoring.

A key risk to 5G is the general unpreparedness of the industry to adopt 5G applications. While True and AIS already operate narrowband IoT networks with considerable nationwide coverage, uptake of IoT services appears to be poor. The most recently available official data from 2018 puts nationwide IoT connections at just 20,000.

While this number probably increased throughout 2019, we believe that the government will need to focus more on subsidies for enterprises to adopt more 5G applications, and work more proactively with industry to develop more 5G use cases.

The second issue pertains to the release of 3.5GHz spectrum, currently occupied by the satellite operator Thaicom under concessions lasting until September 2021.

The NBTC hinted in February that the spectrum is unlikely to be auctioned in the near future, stating that both AIS and True held sufficient spectrum to build out networks in the mid-band range.

This puts DTAC at risk; the operator did not procure any mid-band spectrum, which provides a good balance between speed and coverage. At the same time, it is unable to lease capacity from TOT or CAT, both of which failed to win any mid-band wavelengths in the auction.

Currently, it is difficult to gauge interest in 3.5GHz spectrum, as operators do not appear to highlight the band as candidate for their 5G services, although we view that DTAC will likely move for the spectrum when it is made available.