A Thai Airways jet on the tarmac at Suvarnabhumi airport. The company's ratings downgrade will only affect future efforts to incur new debt for financing. (Photo by Somchai Poomlard)

The latest downgrade of debentures issued by Thai Airways International Plc (THAI) does not affect its current liabilities, but a close watch is warranted for creditors deciding on the business rehabilitation petition, say analysts.

Tris Rating has downgraded the company's rating and the ratings on senior unsecured debentures of financially beleaguered THAI to default following the Central Bankruptcy Court's acceptance of THAI's rehabilitation petition.

Earlier Tris Rating downgraded its rating for THAI and the carrier's senior unsecured bonds to BBB from A.

The Central Bankruptcy Court on Wednesday accepted the THAI case and set the first hearing for August.

The court also stated creditors of THAI could oppose the restructuring process for up to three days prior to the first hearing. After that, the court would consider that the creditors agree with the process.

THAI filed its bankruptcy request with the court on Tuesday, seeking protection to continue business pending debt restructuring and rehabilitation.

The company has outstanding debts totalling 244.9 billion baht, 30% of which are owed domestically.

Suwat Wattanapornprom, an analyst at Asia Plus Securities, said the downgrade of THAI's company rating does not affect on existing liabilities, but this will have an impact when the company decides to access additional debt.

"The new cost of debt will increase, in case the company plans to incur additional debt for financing as the credit rating now points towards a higher risk," said Mr Suwat.

As the company is entering a rehabilitation process with negative shareholders' equity, debtors will play a significant role and market participants will keep a close watch on debtors' decision on whether they will agree to a haircut, or convert existing debt into equities.

The company's shareholder equity is worth 11.7 billion baht against total liabilities valued at 244.9 billion as of year-end 2019. 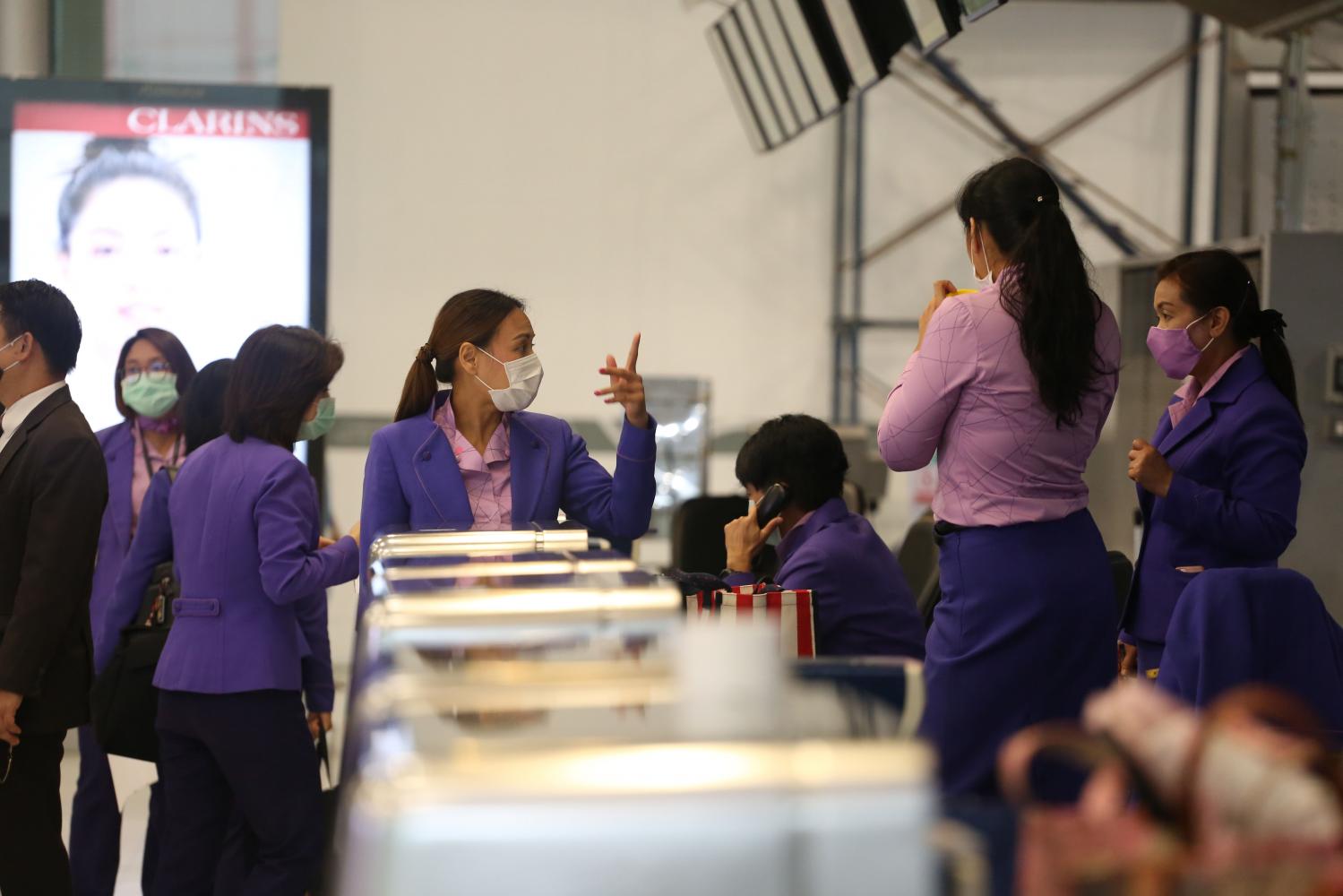 The atmosphere at a Thai Airways International check-in counter at Suvarnabhumi Airport on Tuesday. Varuth Hirunyatheb

THAI has total corporate bonds outstanding worth 71.6 billion baht, with savings cooperatives nationwide making up 35 billion or nearly half of the debenture creditors, according to the Thai Bond Market Association.

These debentures are scheduled to mature from this year through 2034, with 6.6 billion baht of THAI debentures set to mature in the second half.

A source from the bond market, speaking on condition of anonymity, said there are three types of investments in THAI debentures, comprising mutual funds, direct investment through public offering and high net worth investors.

For investors that opted for a public offering, this group has bond representatives that will monitor the situation and look after investors' rights and benefits in case of default.

For mutual funds, many funds have already set aside THAI debentures and this approach will cause the funds' net asset value to decrease to a certain extent because each fund cannot invest much in accordance with the risk criteria.

The latest default rating does not affect market sentiment too much because investors have been aware of this development, but this could affect other state-owned corporate bonds as risks are creeping up, said the source.

It is expected the option with the least damage incurred to investors would be extending the bond repayment period, while a haircut would incur some losses, said the source.