Two-year path to prior growth seen

The economy could take at least two years to return to pre-coronavirus growth levels and this year's nadir could be delayed in the event that a second-wave outbreak occurs, says Standard Chartered Bank Thai. 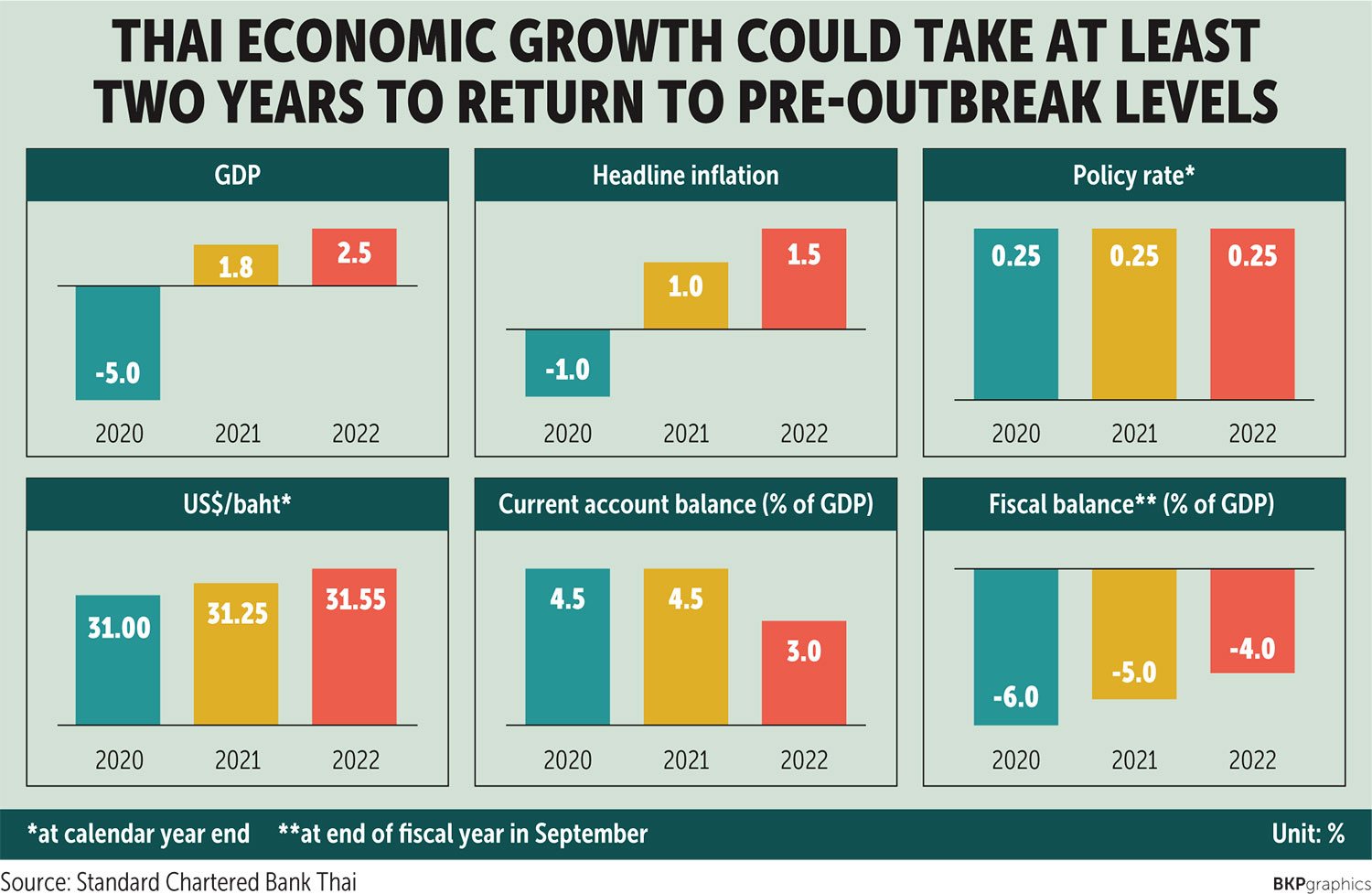 GDP is expected to shrink by 13% year-on-year in the April-to-June quarter, widening drastically from a 1.8% contraction in the first quarter, said Standard Chartered economist Tim Leelahaphan.

The bank is maintaining its forecast of a 5% contraction for the full year.

The annual decline for the first three months marked the worst contraction since 2011's fourth quarter, which saw the worst flooding in several decades.

On a quarterly basis, the economy shrank a seasonally adjusted 2.2% in Q1.

"Despite a sharp contraction of 13% estimated for the second quarter, we cannot confirm that this is the lowest point, as the possibility of a second-wave coronavirus outbreak and the development of a vaccine are key determinants," Mr Tim said.

The bank forecasts a base-case scenario of a 5% contraction this year in the event that a coronavirus vaccine is commercially available next year, but the contraction will narrow to 3% if the vaccine is ready this year.

For the worst-case scenario, economic growth is estimated to dip 10% in 2020 if a second wave erupts.

With the government's lockdown easing, economic activities are expected to start gradually picking up in the second half.

"The export sector is showing signs of recovery and should benefit from China resuming activity and lockdowns easing in other markets," Mr Tim said. "Data released in June is likely to confirm a domestic demand recovery after Thailand's reopening in May; however, we expect the pace of recovery to be slow."

Mr Tim expects the central bank's rate-setting committee to further cut the policy rate by 25 basis points in the third quarter to 0.25% after the rate was trimmed from 0.75% to an all-time low of 0.50% at last week's meeting.

"Amid the monetary policy easing trend, the policy rate is likely to be lowered to zero or even negative depending on economic circumstances and the new central bank governor's direction," he said.

Although the Finance Ministry and the Bank of Thailand have already launched massive debt relief measures to help individuals and business operators, particularly small ones, small and medium-sized enterprises (SMEs), who make up 40% of the country's GDP, do not fully benefit.

Standard Chartered predicts that the baht will appreciate to 31.50 against the greenback at the end of September and march higher to 31 at the end of this year.