Thailand is poised to face its longest economic contraction since the Asian financial crisis.

Thailand's economy in 2020 will face its longest period of contraction since the Asian financial crisis of 1997-98. The economy shrank by 1.8% year-on-year in the first quarter, from growth of 1.5% a year earlier, as weak exports, public consumption and investment dragged on headline growth. 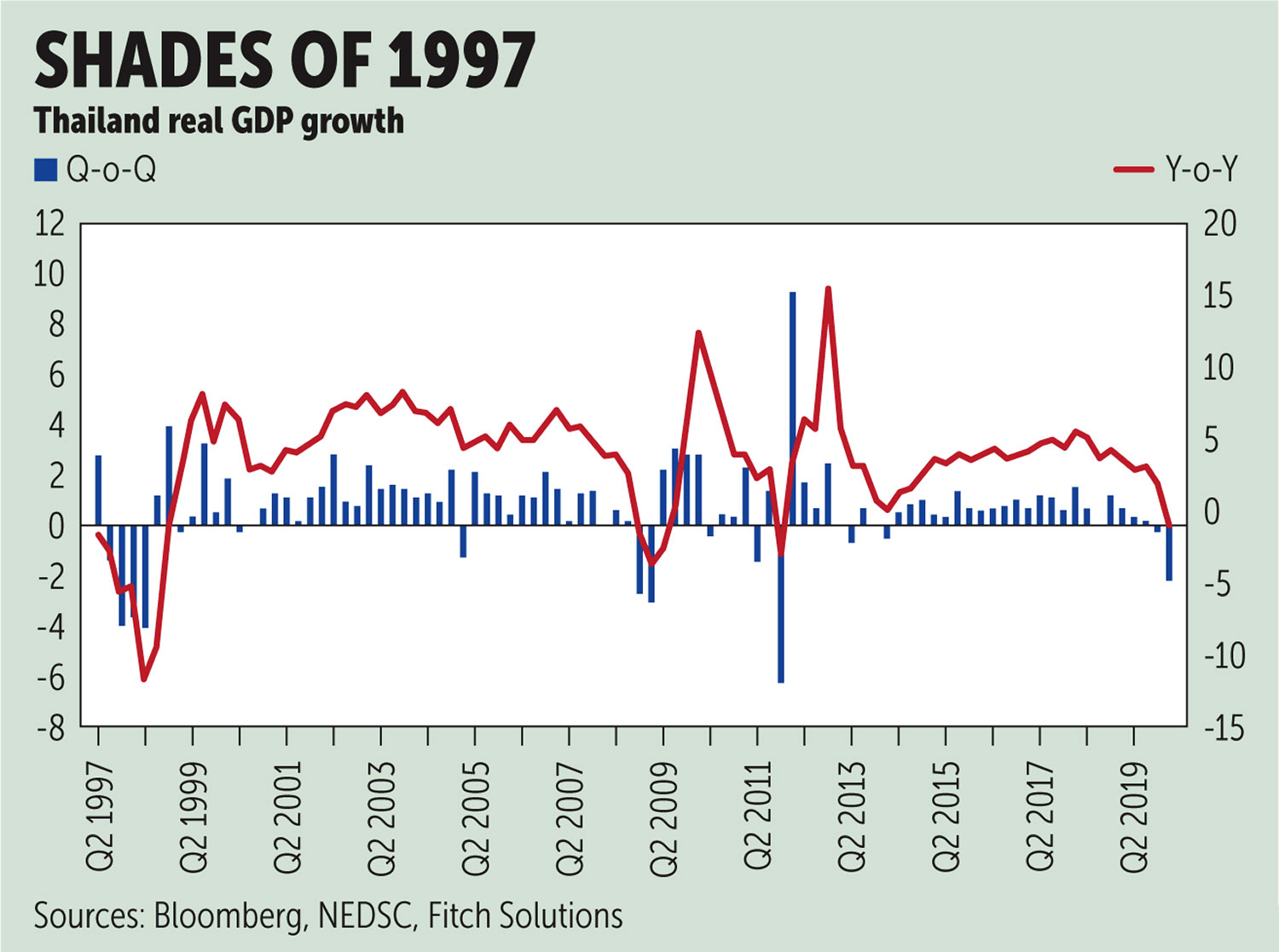 Consecutive quarter-on-quarter GDP declines -- 2.2% in the first quarter and 0.4% in the fourth quarter of 2019 -- mean the economy has fallen into a technical recession.

The country's exposure to external demand (exports account for around 50% of GDP) -- and particularly tourism and travel which indirectly account for 22% of economic activity -- leaves it vulnerable to the slump in global growth triggered by the Covid-19 pandemic.

The local outbreak and resultant lockdown will result in weaker domestic activity as well. We maintain our forecast for a 4.0% contraction in real GDP in 2020, with an expectation for a sharper decline in the second quarter, before a gradual recovery in the second half of the year.

The consensus of a Bloomberg survey of economists was a 3.9% year-on-year decline in economic growth in the first quarter. However, private consumption held up enough to curb a sharper decline. It was the only expenditure component to expand, with 3% year-on-year growth, but we expect this to also decline over the coming quarters.

Leading indicators point to April economic activity being worse than in March; sentiment has fallen further and banks are reporting still-tight credit supply conditions despite efforts by the Bank of Thailand to loosen monetary policy. Business sentiment worsened in April to 44.0 from 50.3, and consumer confidence fell to 47.2 from 51.6.

Lockdowns elsewhere have proved devastating for consumption and investment, and disruptive to exports. Indeed, the full effect of the global tourism slump will become more apparent in the second quarter, as arrival numbers fall further on the back of increased travel restrictions globally in April and May. 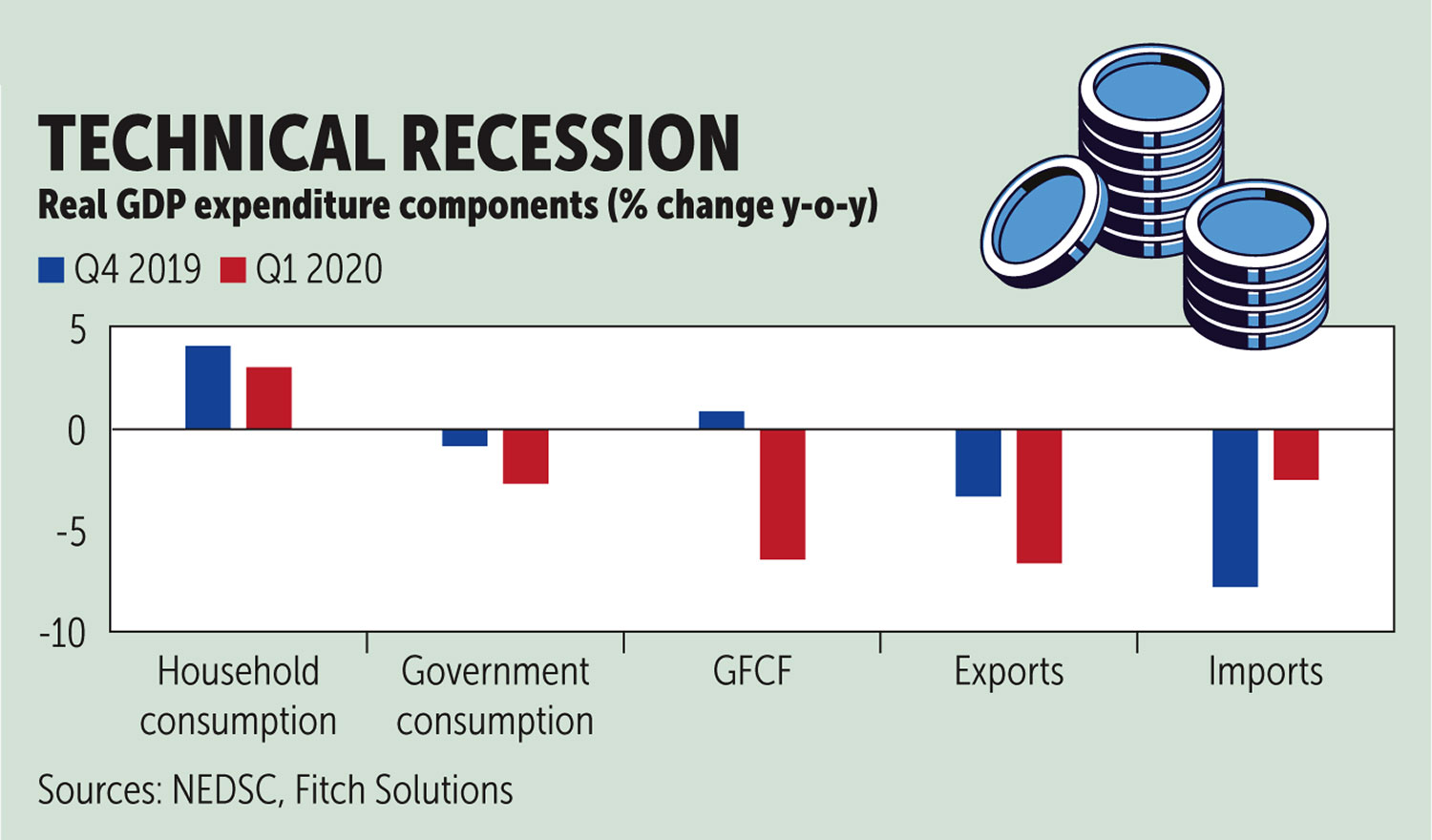 Tourism is a key sector for the Thai economy and we expect the industry to come to a near standstill through most of the second quarter, resulting in a sharper decline in exports. The April Manufacturing Purchasing Managers' Index (PMI) survey noted that backlogs had fallen by a record amount, implying a weaker level of output over the coming months and reduced need for private investment.

The outlook for private consumption will also deteriorate sharply in the second quarter, as lower income and a higher propensity to save will curb demand. We forecast private consumption to contract by 0.9% in 2020, and at around 50% of the economy, a deeper slump than this would ultimately mean even greater GDP shrinkage.

Falling consumer confidence generally translates into higher savings rates given the uncertainty surrounding the Covid-19 pandemic and risks of repeat domestic outbreaks. This will be aggravated by the relatively high share of household debt, at 69.2% of GDP in the fourth quarter of 2019 and above the Bank for International Settlements' aggregate go 43.1% for emerging market economies.

Given relatively high debt levels, a loss of income for households will prove even more damaging. With informal workers accounting for around two-thirds of workers and not included in the official unemployment figure, which is broadly stable at 1-2%, the damage to household incomes will become evident over the coming months as consumption is scaled back aggressively.

We expect a gradual recovery in the second half of 2020 and through 2021 as the economy gradually returns to work, with domestic consumption and investment gradually picking up. This will also receive a boost from reopening of economies abroad, with global stimulus measures to support demand. Supply-chain disruptions will also ease as factories abroad reopen.

However, some sectors will remain depressed due to measures to contain further outbreaks and a weaker global and domestic consumption outlook. Reduced activity in areas such as entertainment and reduced tourist arrivals will effectively prolong the recovery of around a quarter of the Thai economy. This will feed through to depressed incomes for households and businesses, weighing on the pace in which domestic activity recovers.

Indeed, the pace at which domestic activity can recover in the second half of 2020 and into 2021 will depend heavily on the effectiveness of policymakers' stimulus measures, which we expect to be boosted by further monetary easing and macroprudential measures. Government consumption contracted 2.7% and public investment fell 9.3% year-on-year in the first quarter due to delays passing the fiscal 2020 budget. 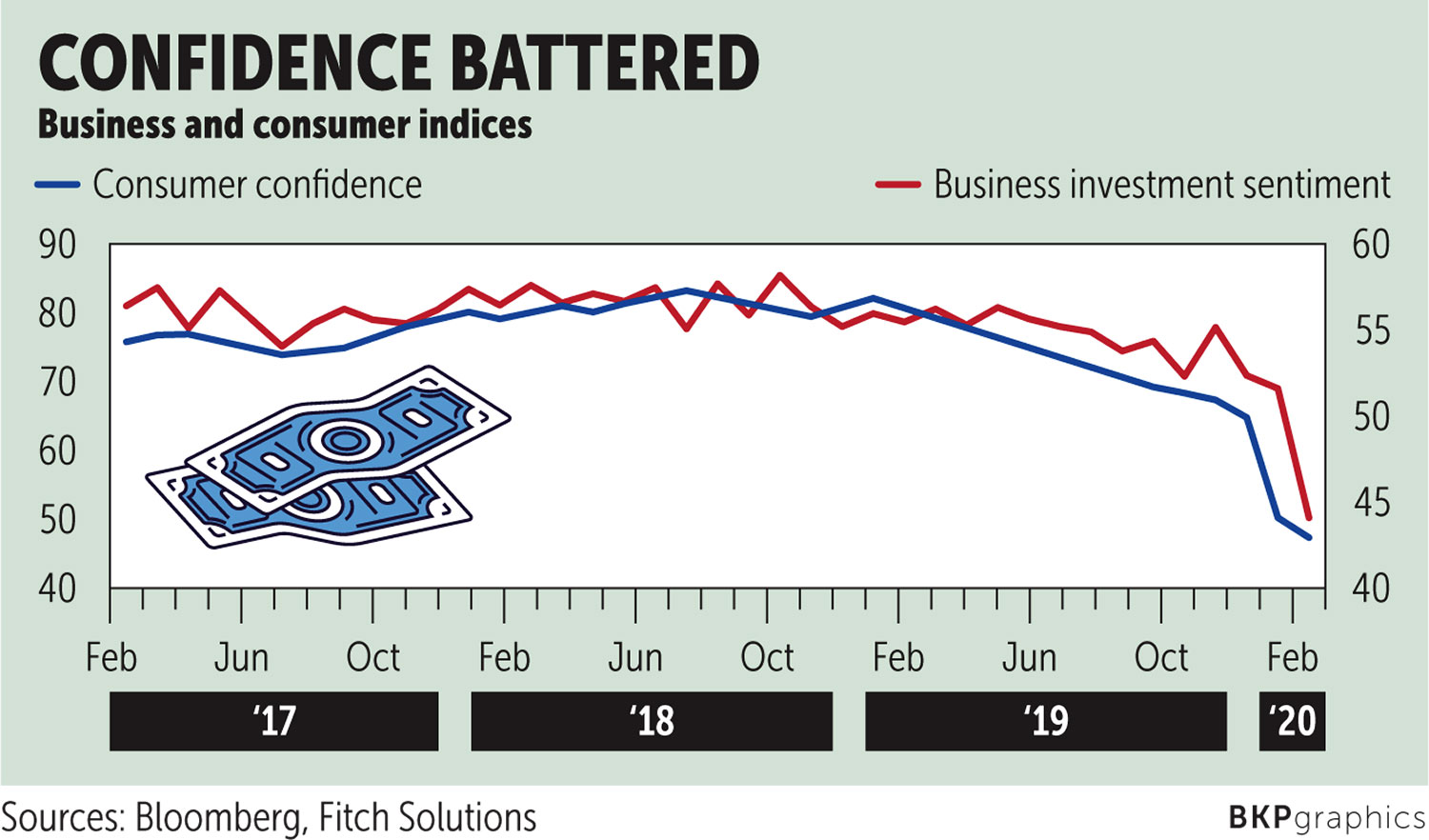 However, this should flip into expansion as the government seeks to kick-start growth with infrastructure investment. We expect social transfers and consumption of fixed capital to pick up as part of the stimulus efforts, with government consumption contributing 2.0 percentage points to headline growth.

At 9% of GDP, the fiscal package announced to alleviate the impact of the pandemic is one of the largest among emerging markets. And with the BoT embarking on unconventional policies to ease funding constraints for the government, free up bank credit and lower lending rates, domestic activity will receive a boost over the coming quarters.

But downside risk remains, given external headwinds and risks of repeat Covid-19 outbreaks in Thailand as lockdown measures are eased. Both China and South Korea have witnessed new outbreaks, which highlights the difficulties of containing the virus.

Thailand is also highly exposed to what happens externally; repeat outbreaks abroad, weak demand and rising nationalism could all contribute to a bleaker outlook for exports and investment into the country's export-orientated sectors.