May prices down 3.4%, led by oil slump
Business

The consumer price index, a gauge of headline inflation, fell 3.44% year-on-year in May, the biggest decline in nearly 11 years, led by lower prices for energy and fresh produce and the government's efforts to reduce living costs. 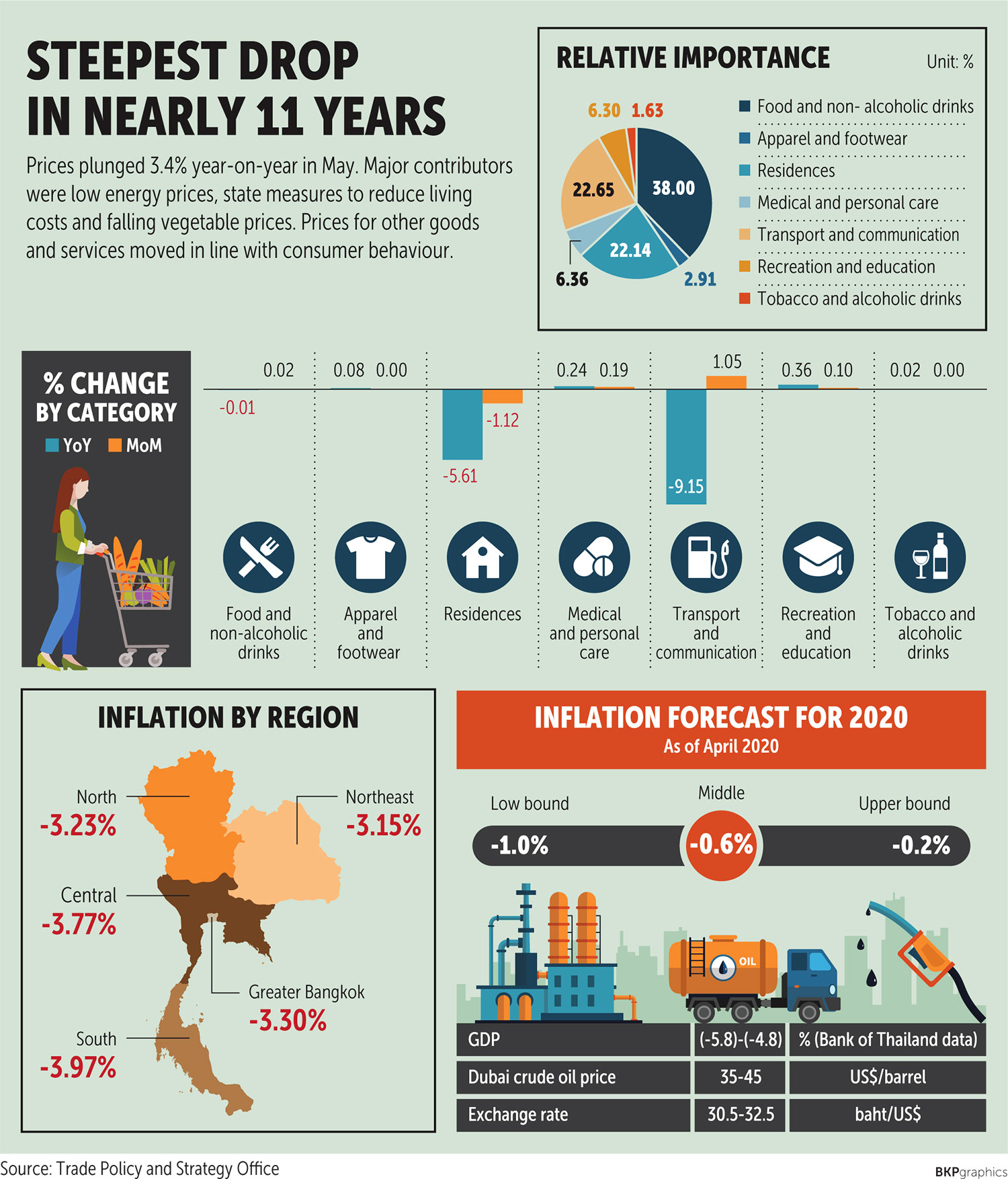 This was the third straight month of declines after prices fell 2.99% in April and 0.54% in March, which saw the first contraction in 33 months.

Pimchanok Vonkorpon, director-general of the Trade Policy and Strategy Office, cited three main causes of the drop: low global energy prices, which constricted domestic prices; a 8.8% year-on-year decrease in prices for fresh vegetables and fruits, partly from a high-base effect; and the government's measures to reduce living costs through temporary cuts in monthly electric and water bills, as well as for particular consumer products.

Other goods and services, the majority of the inflation basket, moved in line with consumer behaviour, Ms Pimchanok said.

Core inflation, which excludes raw food and energy prices, was 0.01% in May.

"Key factors propelling low inflation so far, apart from the coronavirus pandemic, include low energy prices, recessed exports and excess capacity in the industrial sector due to low demand and the trade war," Ms Pimchanok said. "Although the existing severe drought and up-and-coming demand after the lockdown's easing are contributing to higher prices of particular agricultural prices and foods, a significant drop in demand from inbound tourists will deter such contribution. Hence inflation in June is likely to ease but at a slower pace."

The Bank of Thailand insists that May's headline inflation, the lowest reading in nearly 11 years, doesn't indicate that Thailand has already entered deflation. But the risk of a deflationary spiral remains if the economy contracts at a deeper pace or recovery is slower than expected.

Although the central bank has predicted negative inflation for the full year, largely due to the sharp decline in oil prices, the consumer price index is expected to reverse course next year, said Don Nakornthab, senior director for the economic and policy department at the central bank.

Inflation has dropped for three straight months, he said, and the central bank's five-year inflation projection of 1.8% on average is nearly in the middle of its inflation target of 1-3%, signalling that the economy hasn't slipped into deflation yet.