New route: A bird's eye view of the country's first monorail known as the Gold Line snaking its way past Iconsiam (top left). Test runs will be conducted from this month until September before the service opens in October.

If anyone has visited Charoen Nakhon area in Thon Buri area recently, they might be surprised by the bumper-to-bumper traffic -- a situation rarely seen elsewhere during the Covid-19 pandemic. The congestion has been caused by the construction of the country's first monorail known as the Gold Line.

On the road, construction is going at breakneck speed as the developer tries to meet the agreed October deadline when the Gold Line is due to officially open.

The project has suffered delays due to the Covid-19 pandemic after the manufacturer in Anhui province in China was unable to ship the first train to Bangkok in April owing to a local lockdown, according to Manit Techaapichok, managing director of Krungthep Thanakom Co (KT).

KT is the public investment arm of the Bangkok Metropolitan Administration (BMA) responsible for infrastructure projects.

"Now, however, the Gold Line project is back on track," he said. The train manufacturer has since shipped trains to Bangkok with the first set to arrive on Wednesday.

KT had originally expected to organise a test run in April, but even with the delay still expects the service to be ready for its first passengers on Oct 1, Mr Manit told the Bangkok Post.

Before Covid-19, the Gold Line would likely have been regarded as just another train project among several which have been built, or are in the process of construction.

Yet the damage done to the local economy by the outbreak has led to the Gold Line becoming a symbol of hope for recovery. The local community is looking to the new line to provide a boost to the area's ailing businesses. 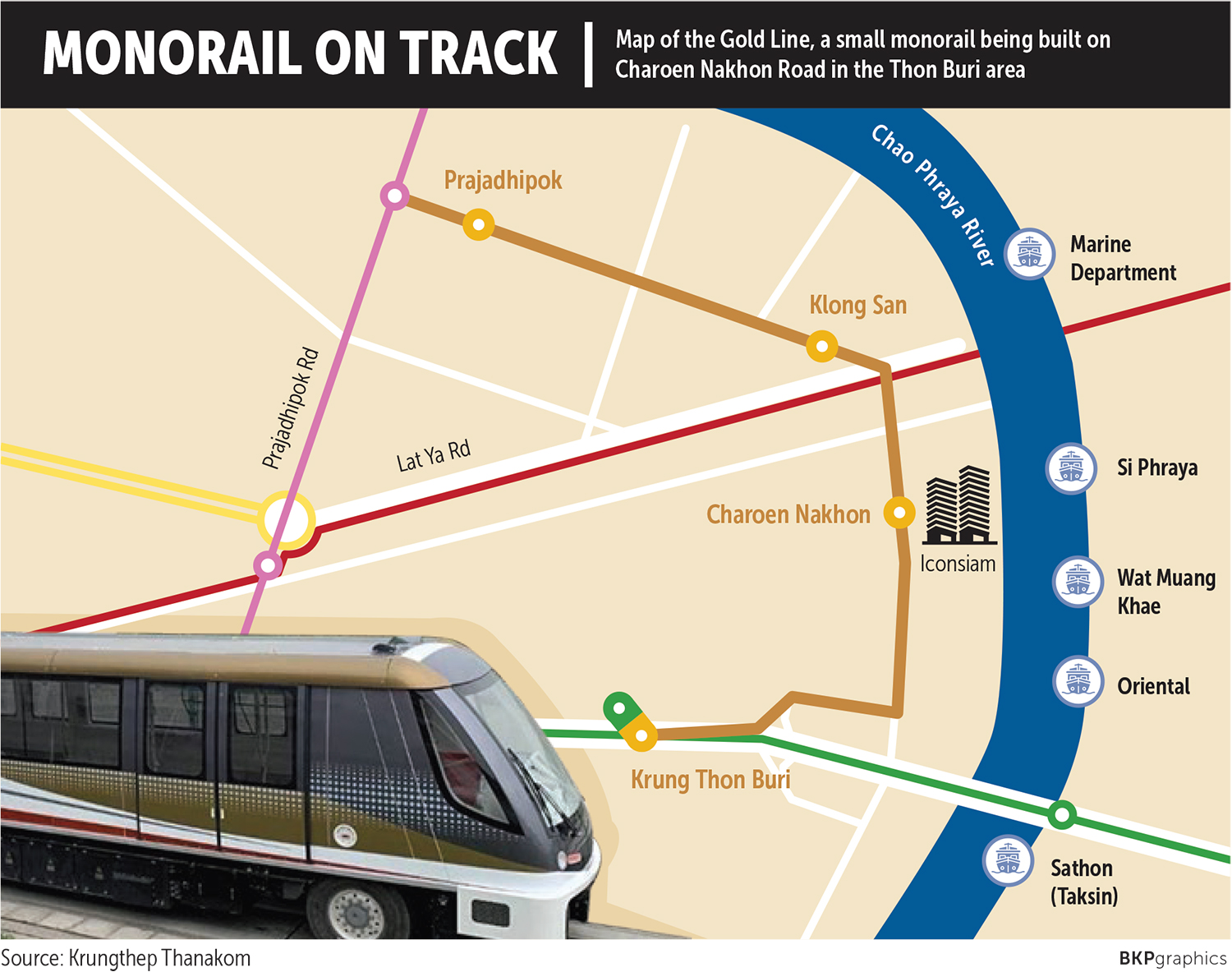 Hope for the future

The Bangkok Post recently talked to residents and business owners in Klong San district about the line.

Most were optimistic the project would help the local economy and encourage tourism as well as improve the quality of life for residents.

"The easiest way to access Klong San and Charoen Nakhon now is via boats that take you from Sathon Pier. The Gold Line will make the area more accessible," Kung, owner of a shoe shop in Klong San Complex, said.

Ms Kung said she has high hopes the monorail will bring more people to come and spend in the area.

"My customers and sales have fallen by 80% due to the outbreak of Covid-19. Local tourists and Chinese tourists have gone. I'm not sure how much this project is going to help the situation in the short term, but it will surely help in the long term," she said.

Wittaya Sriwankham, a resident on Charoen Nakhon Road, also believes the monorail will provide a shot in the arm to the local economy.

"The Gold Line will make it more convenient for people and tourists to get to this area.

"In my view, it will also improve the environment and the well-being of local residents as there will be less traffic congestion and pollution. I can't wait to use it," he said.

Manusawee Srithongkul, owner of a small cafe in Klong San district, said she welcomed the monorail as it might bring prosperity to the neighbourhood. However she was still a little concerned that urbanisation may see Charoen Nakhon lose some of its character.

While many local businesses and residents believed they would benefit from the project, Prasert Kraiyasuan and Somjit Leela, a tuk-tuk driver and a motorcycle taxi driver in Klong San Complex, thought differently.

"It's going to hurt us for sure. When the monorail opens its service, there will be fewer passengers for us. Fewer passengers means less income," Mr Prasert said.

"Half of our customers now use our service to travel from Klong San Pier to Krung Thon Buri BTS station. When the BTS and monorail are connected, there will be no need to use us anymore. We now charge passengers 40 to 50 baht per trip, but I've heard the monorail will only charge 15 baht, so it's three times cheaper.

"My income has already been affected by the Covid-19 outbreak and soon there will be the Gold Line. I may have to find a new location or find a new job," Mr Somjit said.

Charoen Nakhon Road, in Klong San district, hasn't always been a Bangkok hotspot. For many Bangkok residents, it was a relatively unknown community until the arrival of the Iconsiam mega-mall.

In its early days, the neighbourhood was once home to many civil servants, a busy market and warehouses. It was first registered as Bang Lamphu Lang (Lower Bang Lamphu) then changed to Buppha Ram district before being named Klong San.

That name is believed to have been chosen by Phraya Yisan, an elite civil servant who was appointed to develop canals in the area.

The district was the location of one of the first hospitals in the country -- Thonburi Hospital, built over a century ago during the reign of King Rama V, to treat patients suffering from the plague.

It later became a residential area for wealthy families and elites who travelled to work in Bangkok by boat. Their houses were often located next to the river.

The inner part of Klong San is known as a quiet local community with less wealthy families residing there.

Recently, many obsolete warehouses, docks and factories in this century-old district have been converted into contemporary art galleries, design shops and tastefully decorated bars by private investors to boost tourism.

The area is also gaining notoriety for its high-end property development projects. An abundance of luxury riverside condos have shot up recently. Among those projects is Iconsiam -- the mega mixed-use property featuring malls and residences that opened back in 2018. 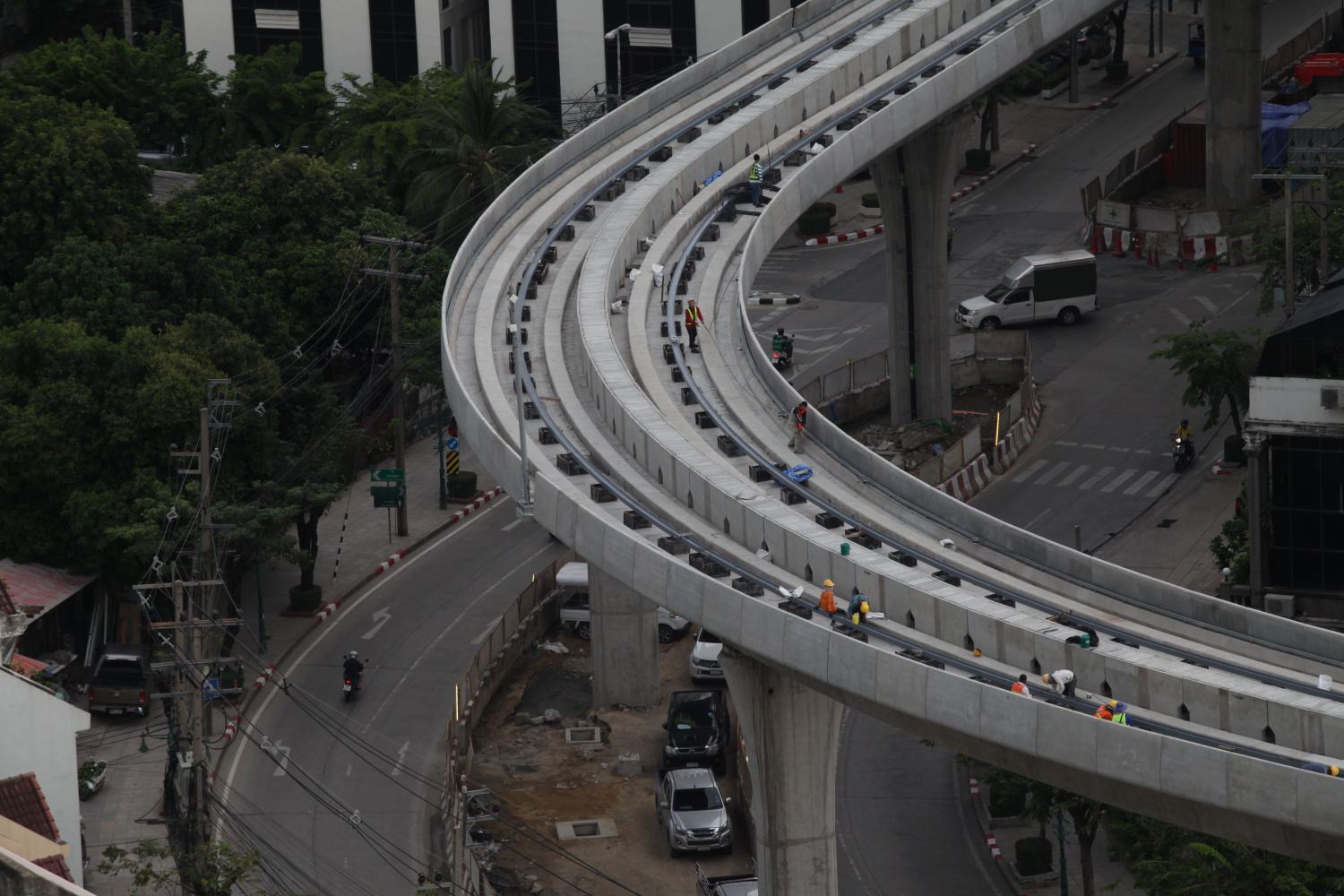 Ramping up: Workers are speeding up the installation of rail of the country's first monorail known as the Gold Line.

"Klong San and Charoen Nakhon, which had always been quiet districts and off the radar of real estate developers, have become golden areas. Iconsiam is a catalyst development that has sparked tourism, investment, and property development on the Thon Buri side of the river," said CBRE Thailand managing director Aliwassa Pathnadabutr.

The Gold Line is a 2.8-kilometre monorail line that will extend the BTS Green Line from Krung Thon Buri BTS station to the Phra Pok Klao bridge. The first part of this monorail will have three stations, namely Krung Thon Buri, Charoen Nakhon (Iconsiam) and Klong San Station, projected to open in October.

Meanwhile, the second part of the project along Somdet Chao Phraya Road with a fourth station at Wat Anongkhram is expected to open in 2023.

The plan is to improve public transport systems in Thon Buri district of Bangkok, especially in the fast-growing areas along the Chao Phraya River, according to KT.

"The BMA hasn't had to pay a single baht or seek any funding from the government.

"The money is expected to come from both ticket sales and sales of advertisements at the Gold Line's stations," Mr Manit said.

Advertisement sales created around 2 billion baht in funds for the construction of the route, the electrical and mechanical system maintenance and hiring the consultant, said KT's managing director.

Krungthep Thanakom sold the rights to the adverts along the route to the business cluster that owns Iconsiam's advertisements in exchange for a 30-year concession.

A contract was signed with BTSC to fund one of the light rails. The concession is for 30 years at a cost of 13.52 billion baht, said Mr Manit. BTSC must invest in the monorail's operations during that concession period.

The BMA hired a contractor to build the route, and Bangkok Mass Transit System Plc (BTSC) to operate the train service.

The light rail will be elevated 14-17 metres above the ground -- similar to the height of other electric rail routes.

Each train consists of two carriages, which are capable of transporting up to 4,300 passengers per hour, he said.

When the Gold Line service begins in October, it is projected to serve about 42,000 passengers a day.

The project has been the first mass transit line in Thailand to use the Automatic Guideway Transit (AGT) system which allows construction to take place in limited space thus sparing land expropriation.

Moreover, it is a light rail which makes it possible to use smaller columns than traditional systems.

The fact that its trains will use rubber wheels means that they will run more quietly than traditional trains and create less noise pollution. AGT is also a driverless system, the first of its kind for Thailand.

According to Krungthep Thanakom, the first rubber-tired, self-driving electric train is scheduled to arrive in Thailand on June 10.

This two-carriage train will be handed over first before the delivery of the remaining two trains. Test runs will be conducted from June to September before the service opens in October.

As of last month, construction of the depot and stabling yard and three stations -- Krung Thon Buri, Charoen Nakhon and Klong San was 88% complete.