above  More than 90% of work on Bang Sue Central Station is now complete. Once finished, it will be the largest and most modern railway station in Asean.

After several decades of dormancy, Thailand's rail transport sector is entering a renaissance.

In the capital city, 10 mass transit projects are under construction. Across the nation, major railway projects are also underway, including the 308-kilometre dual-track railway from Nakhon Ratchasima to Ubon Ratchathani. Many municipalities -- from Chiang Mai in the North to Phuket in the South -- are also pushing plans to build their own rail systems.

However, none of these projects reflect Thailand's rail renaissance like Bang Sue Central Station, a "mega-station" that will replace the century-old Hua Lamphong Station as Bangkok's main rail hub.

The State Railway of Thailand (SRT) says Bang Sue Central Station will open in January 2021, along with the Red Line commuter rail.

"Once completed, Bang Sue Central Station will be the largest railway station in Asean. All diesel train services which terminate at Hua Lamphong will eventually be moved here, and the old train station will be converted into a museum," SRT deputy director Worawut Mala told the Bangkok Post.

Mr Worawut said the station will serve as a hub for rail transport, with platforms to accommodate diesel trains, electric commuter trains, as well as high-speed regional trains and the airport link between Don Mueang, Suvarnabhumi and U-Tapao airports.

The 15-billion-baht station is being built on 2,325 rai of land owned by the SRT. As it is envisioned as a hub, the station will be equipped with maintenance depots for both diesel and electric trains. Public utilities will be located there, while an elevated walkway will connect the station to the new Mo Chit Bus Terminal.

One of the highlights is a 186,030-square-metre (m²) memorial dedicated to King Rama V, known as the Father of Thai railroads. The king's statue will be surrounded by a 14,000m² pond with fountains. While the station itself is nearing completion, work on the memorial has yet to begin as it has to be approved by the Bureau of the Royal Household first. As such, it is unlikely the memorial will be completed in time for the station's opening.

The station's main structure consists of a three-storey building, not including the underground car park and the mezzanine level. Once completed, the building will be over 596 metres long and 244 metres wide. With a total usable floor area of 274,192m², the station will have a total of 26 platforms. It will also have enough parking space for 1,624 cars -- which is important to commuters as the station will be connected to the MRT's Blue Line.

"Ticketing windows, retail and food shops, waiting areas and the connection to the Blue Line will be located on the first floor," Mr Worawut said.

"The mezzanine will house more shops and control rooms, while four platforms dedicated for the SRT's Red Line suburban trains and eight platforms for diesel trains will be located on the second floor."

"The central station will help ease railway congestion in Bangkok, as there is a bottleneck at Hua Lamphong station that forces diesel trains to take turns while entering and/or leaving the station," he said. 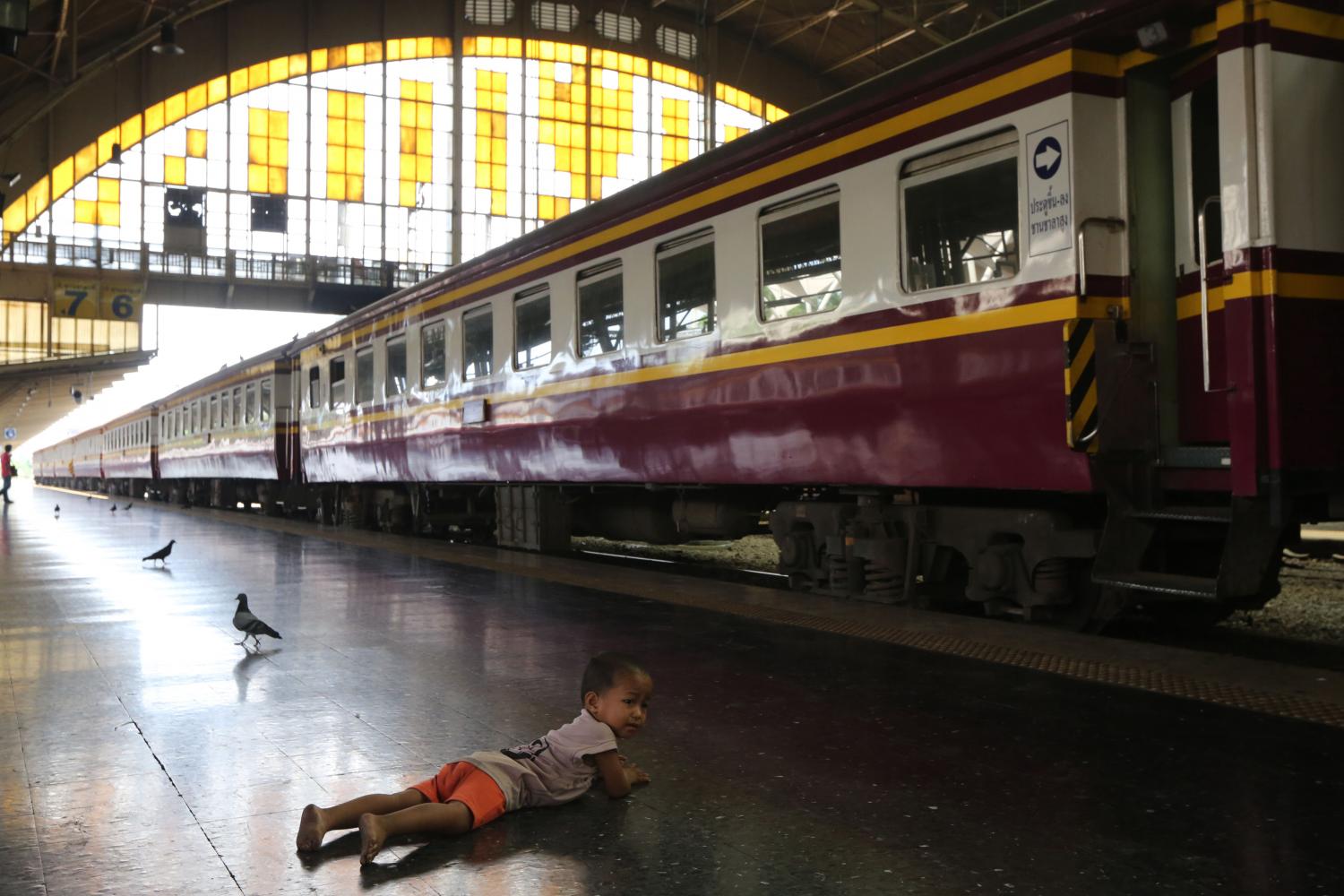 Bang Sue Central Station will be a part of the SRT's Red Line suburban railways system. It will serve as the terminus of the 26km "Dark Red" service between Bang Sue and Rangsit, from which passengers can switch to the 15km "Light Red" service that runs to Taling Chan.

Civil works on the Red Line -- which began in January 2009 -- have been completed at a cost of 9.08 billion baht. the SRT is waiting for the signalling system to be installed and the train sets to arrive, Mr Worawut said.

By the end of the year, the government plans to find contractors to work on three extensions for the Red Line -- the 8.4km Rangsit-Thammasat Rangsit section, the 14km Taling Chan-Salaya section and the 8km section between Taling Chan and Siriraj Hospital. Combined, the contracts are estimated to be worth around 23.2 billion baht.

Once operational, the Dark Red service on the Red Line will provide a rail link between the northern and southern parts of Bangkok, while the Light Red service will link the city's eastern outskirts with the west.