The baht has surged past 31 per US dollar on the back of month-to-date net foreign inflows moving into local equities and bonds, a motion contrary to Thailand's sputtering economic outlook. 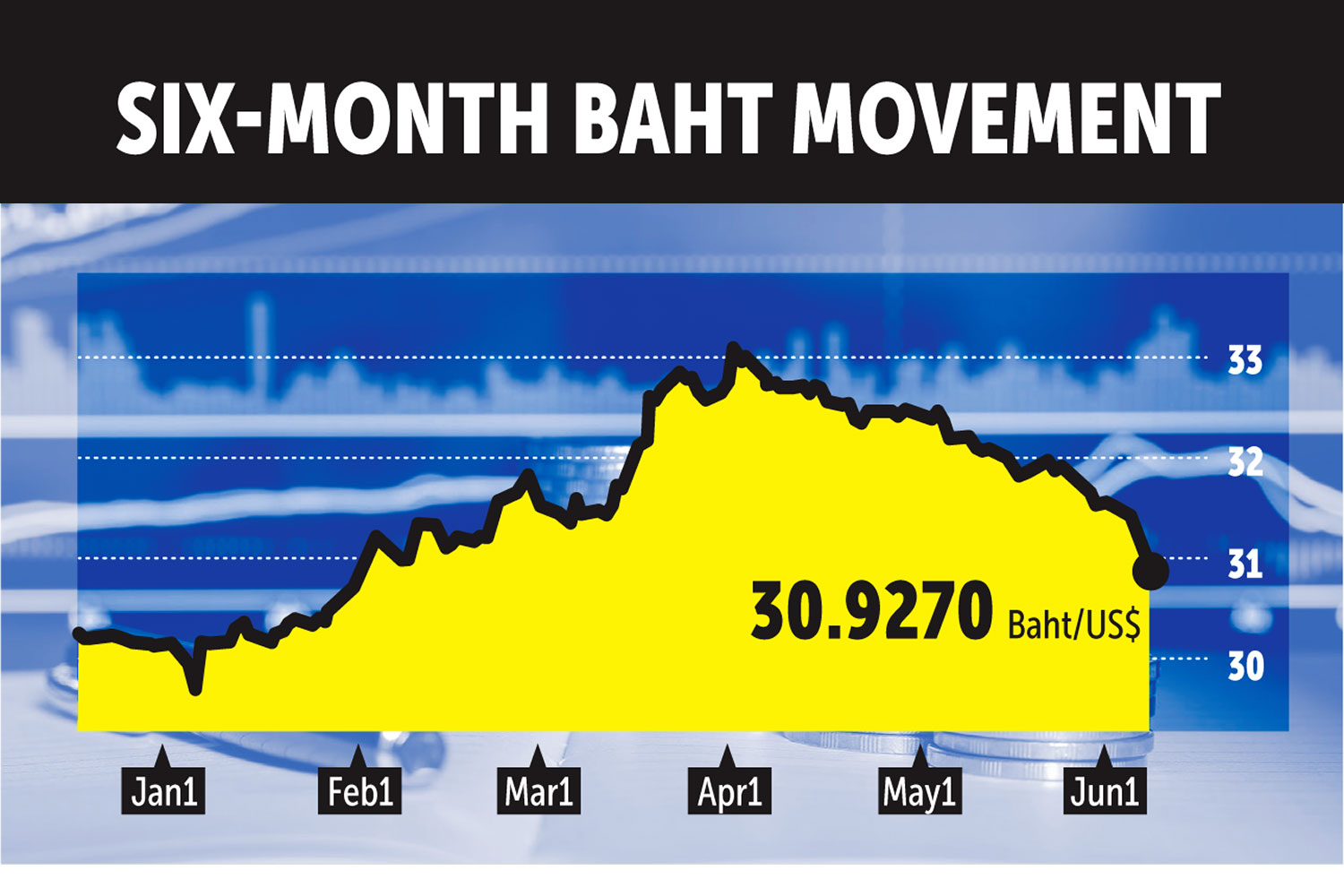 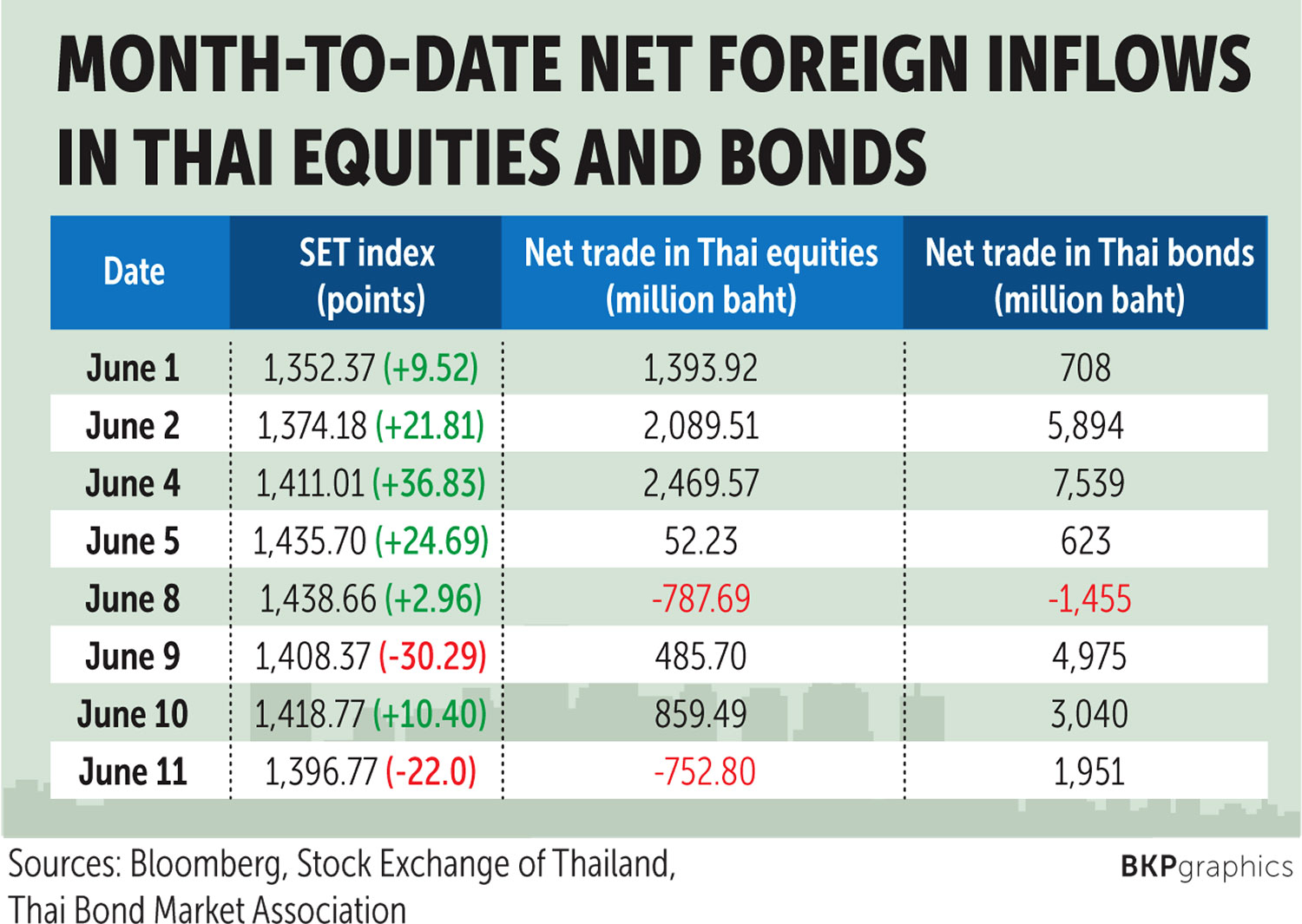 The local currency has strengthened by 2.7% against the dollar since the end of May, ranking third after Indonesia's rupiah and South Korea's won, according to the Bank of Thailand.

The baht has breached its 200-day moving average resistance, a technical pattern that could encourage speculative inflows, Bloomberg reported.

The baht's value touched 30.82 at one point on Thursday before retreating to 30.92 as of press time.

The local currency's value against the greenback has seen a sharp appreciation, surging from 33 in early April to pierce the 31-per-dollar threshold this month.

The baht was Asia's top-performing currency in 2019, ending the year with a value of 29.90 to the dollar as investors perceived it as a safe haven because of Thailand's high current account surplus and foreign reserves.

Chantavarn Sucharitakul, assistant governor for communications and corporate relations at the Bank of Thailand, said the baht's appreciation is in line with the trend of regional currencies as the dollar weakens.

"Recent capital inflows are mostly made up of a return of capital from Thai investors and various funds that previously invested overseas, while foreign investors have returned to invest in the local equity and bond markets at a modest amount," Mrs Chantavarn said.

Foreign exchange rates could experience volatility given uncertainty over economic conditions and financial markets domestically and internationally, she said.

Month-to-date net foreign inflows are valued at 5.8 billion baht moving into local equities and 23 billion baht into bonds, according to data from the Stock Exchange of Thailand and the Thai Bond Market Association.

The baht's rise is being propelled by higher offshore fund inflows to Asia after the US Federal Reserve signalled it would maintain interest rates near zero until the end of 2022, said Thiti Tantikulanun, Kasikornbank's senior executive vice-president.

"The baht's upward trend is expected to continue, and it could test the support level of 30.50 in the near future," he said.

Jitipol Puksamatanan, head of markets strategy at SCB Securities, said the baht has risen amid a dollar sell-off by exporters, coupled with fund inflows into the domestic capital market.

Central bank efforts to curb the baht's rapid gain have not materialised, he said.

The real yield of Thai bonds, ranked among the region's top returners due to low inflation, is another factor attracting foreign inflows, said Visit Ongpipattanakul, managing director of Trinity Securities.

The strengthening baht is, however, not in line with the country's economic conditions.

Thailand's economy is on a path to recession after shrinking 1.8% year-on-year in the first quarter, the deepest contraction since the flood-hit fourth quarter of 2011.

The economy has been relying on tourism and trade over the past several years as consumption was curtailed by elevated household debt. Investment was blunted by delays in fiscal budget disbursement and political uncertainty.

Exports and tourism have been hammered by the coronavirus pandemic, with zero new tourist arrivals for April and May because of inbound flight restrictions.

The baht's strengthening value has become a worry for the central bank. Foreign exchange dealers were summoned for a meeting with central bankers last Thursday to discuss the baht's rapid gain.

The central bank asked foreign exchange dealers if it would be possible to quote gold prices in dollars instead of baht for outbound and inbound shipment transactions, as well as for the sale of imported gold to other local dealers.

The central bank also asked gold traders to meet earlier this week, but the talk was postponed.

Tanarat Pasawongse, chief executive of Hua Seng Heng Group of Companies, said gold shops could adopt the policy of trading gold in dollars, but retail gold traders would still have to convert the baht into dollars via commercial banks.

Gold exports are unlikely to be a root cause of the baht's recent gains because the local currency's value remained strong despite a recent decline in gold prices, he said.