Fewer restrictions may not be enough

The Temple of Emerald Buddha, which is usually packed with Chinese group tours, has few visitors nowadays. Chinese visitors could return during the Golden Week holiday in October, albeit not in tour groups. (Photo: Wichan Charoenkiatpakul)

The Tourism Authority of Thailand's (TAT) China office is tempering enthusiasm that many Chinese tourists will visit in the second half this year as travel restrictions ease, as low Chinese purchasing power for outbound trips persists and an uptick in new infections emerges in Beijing.

The surging unemployment rate of 6% or 27 million on the mainland remains a challenge as Thailand eagerly awaits its No.1 source market.

Lerdchai Wangtrakoondee, director of TAT's Shanghai office, said after temporarily adopting new hygienic practices for months, the situation in China is returning to normal, although outbound tour operators are still on ice.

He said the actual unemployment rate is expected to be more severe as the figures only count urban areas.

"Spending power is weak and the cost of travel will be higher because of lower capacity in tourism services, such in fewer flight seats, so Thai tourism operators should be aware the market will be hobbled for some time," said Mr Lerdchai.

He said Thailand will face tough competition from rivals eager to lure Chinese tourists back, led by the Maldives, which plans to lift travel restrictions to all nationalities in July.

Even Thailand's goal to attract medical tourists during the first phase of reopening will not be easy as Singapore has strong public health services and has an advantage in Chinese language, said Mr Lerdchai.

He suggested local operators step up marketing campaigns to target cities that saw high GDP growth rates in 2019, such as Shanghai, Beijing, Shenzhen, Guangzhou and Chongqing.

Even though cities are affected by the outbreak, people there still have enough purchasing power to travel once the bans are lifted. 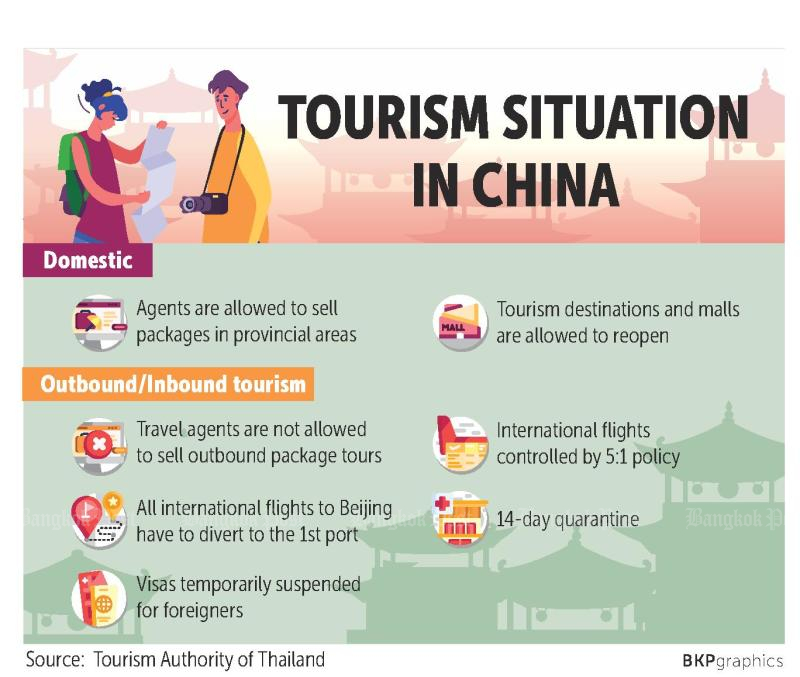 Santi Sawangcharoen, deputy executive director of East Asia for TAT, said the Chinese government extended its international flight restrictions until October, allowing one airline to serve one country, from one Chinese city to one foreign city, with no more than one flight a week, its so-called 5:1 policy.

The TAT predicts two scenarios for the Chinese market. The best case is tourists will return to Thailand during Golden Week or the national holiday in October.

In the worst case, Thailand has to wait until Chinese New Year in 2021, which will fall in February.

During the first five months this year, Thailand welcomed 1.2 million tourists from the mainland, a sharp fall of 74.1% year-on-year, with tourism receipts decreasing by 75.8% to 57.2 billion baht, according to the Tourism and Sport Ministry.

As the mainland has reported new infection cases during the past week in Beijing, Anchalee Kumwong, director of TAT's Beijing office, said the rising numbers may slow down the market recovery beyond the Golden Week period.

The agency has to monitor the market closely to see whether the situation escalates in the next few weeks.

She said although the number of new cases has not yet triggered a second wave, because Beijing is China's capital the government and people will implement more rigorous safety measures to curb with the virus relative to other cities.

"Excluding Beijing, surrounding provinces such as Hebei, Henan and Shanxi are target markets that may come back to Thailand first during the coming Golden Week," Mrs Anchalee said.

To help the industry, the government is set to approve today a domestic tourism stimulus plan aimed at adding purchasing power for consumers.

Thai star Panipak a cut above the rest

Weerathep Pomphan's extra-time goal on Thursday gave Thailand a 1-0 victory over Indonesia and a place in the men's football final of the SEA Games in Vietnam.