From down and out to the 'Tesla of Thailand'
Business

From down and out to the 'Tesla of Thailand'

On the surface, Somphote Ahunai, one of Thailand's few self-made billionaires, is easily compared to Elon Musk -- the ostentatious, genius Tesla founder, who is as well known for his prophetic futurisms as for his frequent, unbecoming Twitter outbursts. 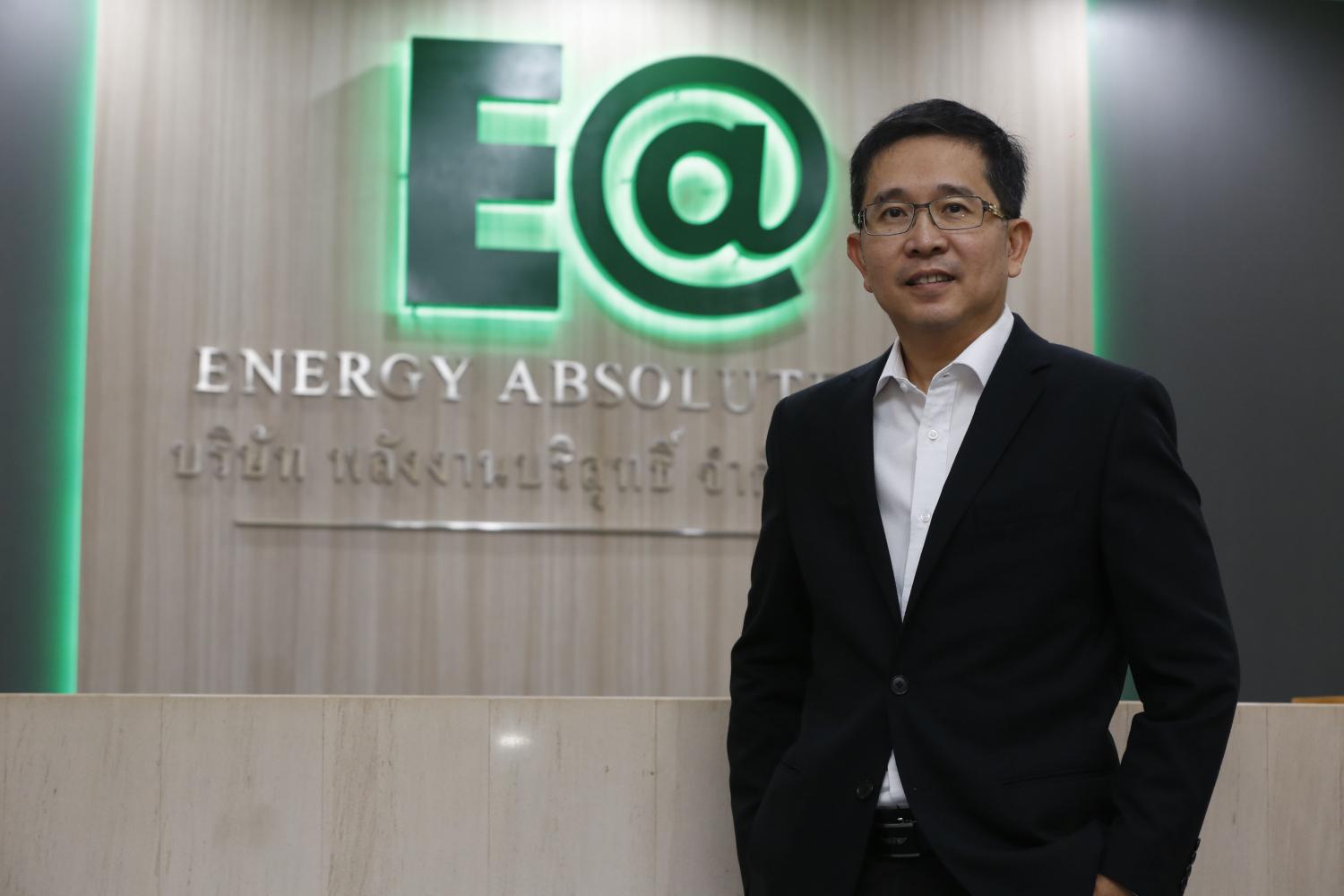 Mr Somphote has built EA into a SET-listed firm with a market cap exceeding 150 billion baht.

But besides their common business interest in electric vehicles (and the fact that Mr Somphote's business is often referred to as the "Tesla of Thailand"), the rest bears little comparison.

A better comparison would be Warren Buffett -- the US billionaire best known not for his keenly prescient investments, but for living in the same house he bought 60 years ago for US$30,000, who eschews the common luxuries of his class, preferring McDonald's and Cherry Coke to caviar and foie gras.

Like Mr Buffett, Mr Somphote, 53, lives simply, in a four-bedroom, 18-million-baht condo in Chamchuri Square that he leases. He wears a suit he bought on sale at Uniqlo and wears no watch. He says he technically owns a Rolex but thinks he lost it. (It was a gift from a friend.)

When Mr Somphote sits around a table talking to his workers, it's hard to tell who is the billionaire mastermind behind one of Thailand's most promising "S-curve" companies and whose job it is to pour the tea.

It all oozes unobtrusiveness. Even his explanations for how he came upon his immense fortune are caked in reluctance.

Mr Somphote had wanted to retire at 36 as a millionaire, having calculated that the money he made as a financier and stockbroker was more than he could ever spend with his lifestyle, even after educating his children overseas.

But one bad investment made him a billionaire.

"It was an accident," Mr Somphote says. "I went to my parents and said I wanted to retire, but they would tell me you have a happy life, but how about brother and sister? You need to take care of them."

So what followed, by his telling, is that he was suckered into buying a biodiesel factory as one last big investment before he could finally take it easy.

The factory turned out to be unprofitable; he had bought it at a high price because he was unfamiliar with the industry. But because he had family investing in the project, he couldn't see it fail.

"So that's my accident. I didn't go out to buy a factory, somebody found me. Then because I wanted to do something for other people, I got something even bigger in return."

Mr Somphote expanded the company beyond the failing biodiesel factory, diversifying it into wind and solar energy and building it into SET-listed EA with a current market capitalisation of over 150 billion baht, his 23.5% stake in the company anointing him with billionaire status -- not that it much changed the quality of his suits. 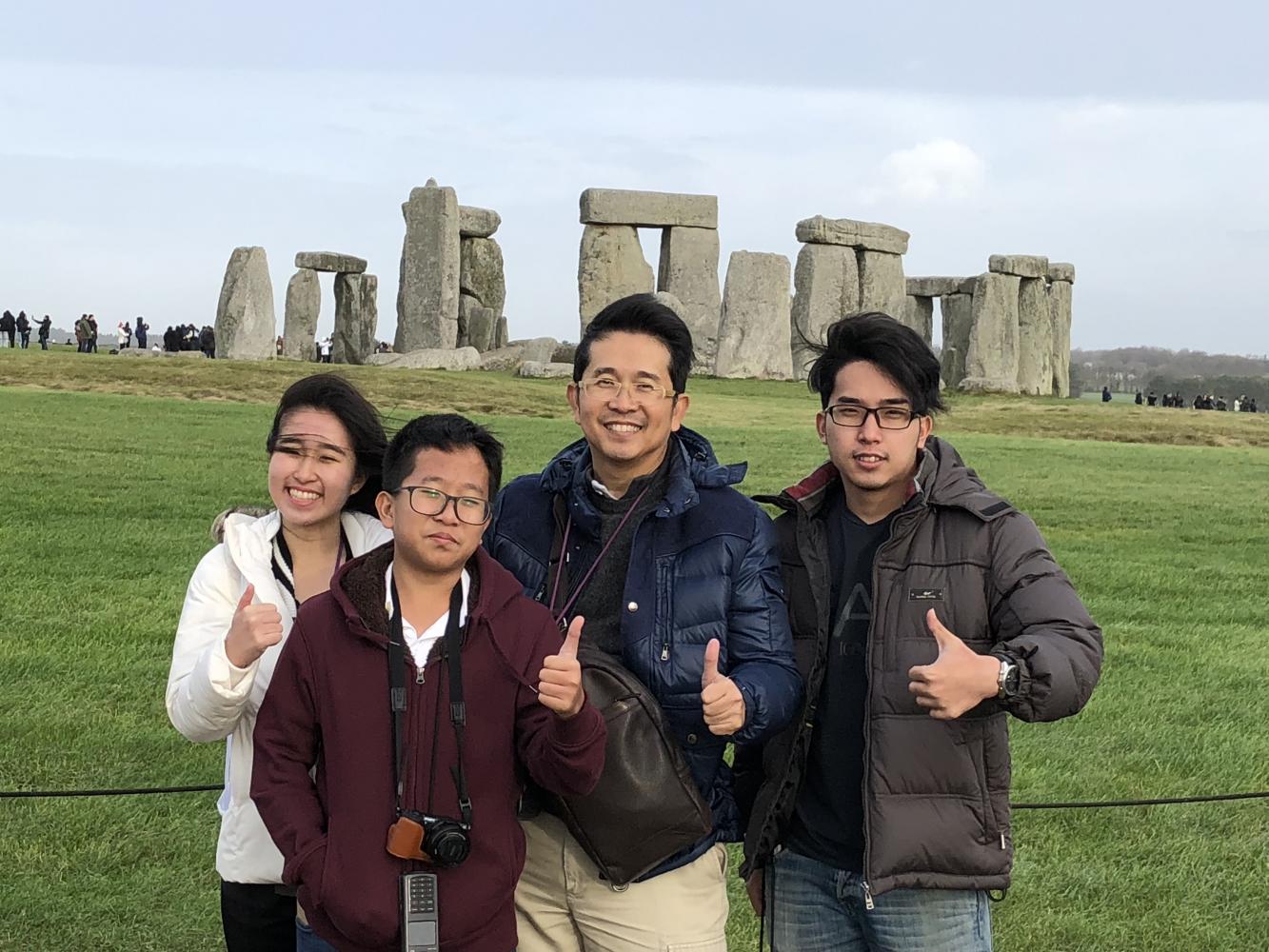 Mr Somphote and his three children at Stonehenge.

And his next venture will prove his biggest and riskiest yet.

To lay the infrastructure for electric vehicles in Thailand, Mr Somphote is building a 100-billion-baht lithium-ion battery gigafactory in Chachoengsao. The company also has a deal with 7-Eleven to install charging ports, while unveiling a line of EVs. In the end it will create a national end-to-end EV infrastructure in which EA makes the cars, the batteries and the charging ports that run partly on electricity generated at EA's various renewable energy plants.

Mr Somphote has become the unlikely saviour of Thailand's high-tech 4.0 ambitions at a time when foreign car makers are fleeing the country or cutting production, startups are flailing from a lack of funding, and the nation faces the worst financial crisis in a generation.

Now everything is riding on the new factory, including his financial future and, more importantly, prospects of early retirement.

But it's hard to believe that this was just an accident of fortune. No one just trips on his shoelaces to become a tycoon, especially not in this industry. It takes planning, tenacity, cut-throat business sensibilities.

Throughout Mr Somphote's life, these contradictory forces live inside him, underneath the cheap suits and self-effacing demeanour, making him the businessman he is today.

Growing up, Mr Somphote was not raised in the highly connected, appearance-conscious world of the Thai elite, but in northern Bangkok to a middle-class family. His father bounced between occupations, mostly buying and selling goods wholesale, while his mother worked in and later owned a beauty parlour.

During childhood, he adopted an early love of computers, tooling around on circuit boards and learning programming languages on the Apple II.

His parents, natural-born hustlers, managed to acquire enough credit through non-traditional channels, accumulating over a hundred friends and neighbours as shareholders, to build a commercial hotel on land leased from the Crown Property Bureau that was used primarily by the US military.

The investment paid off, and by the time Mr Somphote was of age, his parents had enough money to send him to school overseas, where he earned a master's degree in finance at the University of Pittsburgh.

He had initially pursued electrical engineering, getting a bachelor's in the subject at Chulalongkorn University. But he switched to finance for practical reasons, a choice that proved effective at building wealth and draining happiness.

For Mr Somphote's foray into the financial world proved incredibly volatile, as the young up-and-comer found unparalleled success and crushing failures, all while upsetting the elite establishment that saw him as a dangerous disrupter to the nepotistic social order of the finance sector.

He entered the workforce in Thailand at a time when talent was short and a Western education was an invaluable asset. His first job was as a financial analyst at WTK Group, a top brokerage firm in Asean, earning 25,000 baht per month (he says his salary increased 200% per year). He quickly began to amass sizeable wealth, despite often being the youngest person in the room and without a recognisable family name.

But after his superiors forced him to fire his staff, he wanted out of the company and more so to become his own boss.

The 1997 financial crisis proved a lucrative opportunity for Mr Somphote. While many brokerage firms were collapsing in the country, he raised 500 million baht to bid on the Thai subsidiary of a Taiwanese firm, Yuanta Securities.

"Everyone was asking, 'Who's this guy? Who's his father? Where are his connections? Where did he come from?' Suddenly I came out of nowhere to be managing director," he recalls.

As head of Yuanta Thailand, he quickly grew the firm amid the chaos of a collapsed economy, making his staff work from morning to midnight without overtime. His employees brought their spouses into the firm to pick up extra work, building the company into a powerhouse and irking the moneyed establishment along the way.

"In that time I was more extreme than today," Mr Somphote says. "I was not mature and came out of a very competitive environment in the US."

Things were going well. But a little too well, according to the Stock Exchange of Thailand (SET). Mr Somphote had increased trading volume of the company by 10 times and saw unprecedented profits, while other firms struggled with solvency.

He attributes the success to hard work and his autodidact nature of accumulating the necessary knowledge to stay ahead of competitors and become the leading brokerage firm with a 25% market share.

But that did not save him from being forced out of the industry.

In 2001, the SET suspended Yuanta Thailand's trading activities after an investigation into "unusual" movements of shares in BankThai.

He was forced out of the industry by what he calls a "technical blacklist". His roughly 200 million baht in stock value disappeared overnight and he was left with nothing.

Despite being exonerated by the Securities and Exchange Commission a few months later, with no evidence found of market manipulation, his life was still ruined and his wife left him at the advice of a fortune teller.

"Society blamed me as a manipulator without evidence," Mr Somphote says. "I watched television every day saying things about me that were not true. People in the industry I called would not talk to me because they did not want to be associated with my name. They said if I came back the industry would have turbulence again, so the easier way was to have no me."

This brought him to the literal edge. Some time after the blacklisting, he stood borderline penniless on the balcony of his condo, considering jumping as his only way out. But the tears of his three-month-old daughter from the next room quelled the suicidal ideations, and he stepped down, determined to start over.

Without even the money to buy a can of baby formula, he took a job for 25,000 baht a month, the same salary as his first job out of university. Eventually his wife returned, and so did the money. He was able to slowly invest and regrow his fortune. As an independent investor, he eventually started earning 50-100 million baht a year. By the time he was 36, he was worth about 1 billion baht.

And from there he says he was ready for retirement.

But he didn't retire, and at that point he began his life's greatest work, putting in the same effort as he had into finance, only now for something he was actually passionate about.

A business profile is not the place to call someone a liar; but clearly something drives Mr Somphote besides familial obligations and dumb luck, and all the work in front of him is not just an obstacle towards retirement and a happy life. This is a man who has taken every opportunity in life to grow small amounts of baht or established companies into massive fortunes and powerhouses of industry. Behind his unassuming sheen is a truly visionary Thai iconoclast, but you would never hear that from his own mouth.

"If I can make this company sustainable to run on its own, I am willing to leave," Mr Somphote says. "But I cannot stay at home; I have to do something like play sports or music. Or start a charity to help society. Or maybe I can train a new guy, and he can become a billionaire."

FAMILY
- Married with two sons and a daughter

WASHINGTON - Top US generals said Tuesday that they advised President Joe Biden to keep American troops in Afghanistan and expressed concern that the Taliban has not severed ties with Al-Qaeda.

MILAN - Youth activists on Tuesday called out decades of "empty words and promises" from world leaders as they demanded action -- and money -- to tackle global warming ahead of a pivotal UN climate summit.