Thailand's natural rubber industry is likely to remain depressed this year despite a sharp rise in demand for protective rubber gloves driven by the Covid-19 pandemic. 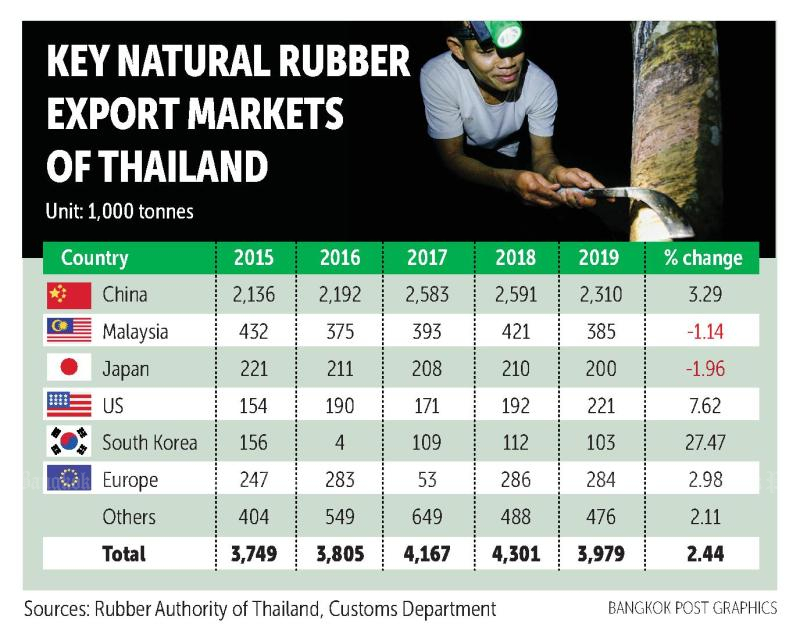 Luckchai Kittipol, honorary president of the Thai Rubber Association, said the virus crisis has prompted many automotive factories, notably in the US and Europe, to shut down or slow their production, resulting in lower rubber tyre demand.

"The world's overall automotive demand plunged, particularly during the lockdown measures," he said.

Thailand is the world's biggest producer of natural rubber, making 4.8 million tonnes last year, with exports accounting for up to 3.97 million tonnes.

Thailand ranks fourth for exports of rubber products and processed rubber, trailing China, Germany and the US. Such exports totalled US$11.2 billion last year, up 2%.

Key markets include the US, China, Japan, Asean and Australia, with auto tyres accounting for 51% of the shipments, followed by synthetic rubber and rubber gloves at 19% and 11%, respectively.

The Commerce Ministry reported global demand for protective gloves is soaring in light of the coronavirus pandemic, driving Thailand's rubber glove exports to surge 16% year-on-year in the first four months of 2020 to $449 million.

Shipments to certain markets without FTAs also grew, with exports to the US rising 9.1% to $194 million and those to Brazil leaping 69.4% to $11.6 million.

In 2019, Thailand produced more than 20 billion rubber gloves, with exports making up 89% of total production.

According to Mr Luckchai, Thailand's natural rubber production is estimated to stay at 4.7 million tonnes this year, with exports accounting for about 3.8-3.9 million tonnes. 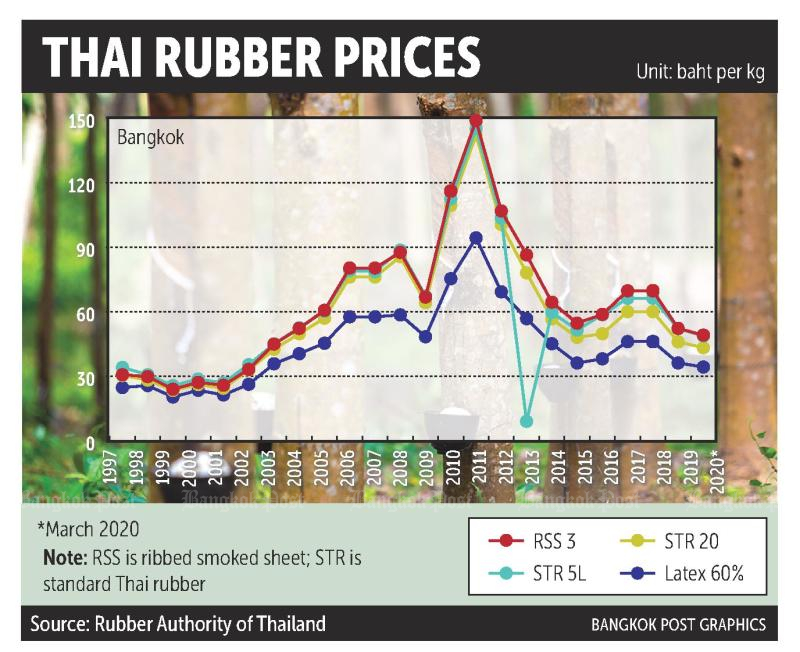 Export value is forecast to drop by around 10% from 170 billion baht last year as a result of bearish global demand due to the pandemic.

The Association of Natural Rubber Producing Countries (ANRPC) predicted recently global production of natural rubber is likely to fall by 4.7% this year to 13.1 million tonnes as the pandemic has depressed demand and put the industry in crisis.

At the beginning of the year, the association forecast 3.8% and 2.7% rises in production and consumption, respectively. Now it sees demand falling by 6% to 12.9 million tonnes.

Natural rubber imports by China, the world's biggest consumer, could fall by 5.1% from a year ago to 4.8 million tonnes, according to ANRPC, while demand in India -- the No.2 consumer and a major producer of rubber -- is set to plunge by 21.3% due in part to the lockdown of its car industry during the pandemic.

Nonetheless, Mr Luckchai expects overall rubber prices are likely to rise by 3-5% from now on from an average 50 baht per kilogramme boosted by higher rubber glove demand and expected stable oil prices in the second half of the year.

Thai natural rubber prices have been falling since 2017, largely due to oversupply from major rubber-producing countries.

The drop was also attributed to the growth of rubber plantations in Cambodia, Laos, Myanmar and Vietnam (CLMV) in the past decade. CLMV supply 5.3% of the commodity to the global rubber market.