A new forecast by the Tourism Authority of Thailand (TAT) says the number of foreign tourists this year may plunge 80% to 8.2 million as revenue slides to 396 billion baht, with international air traffic regaining just 10% of the pre-pandemic schedule. 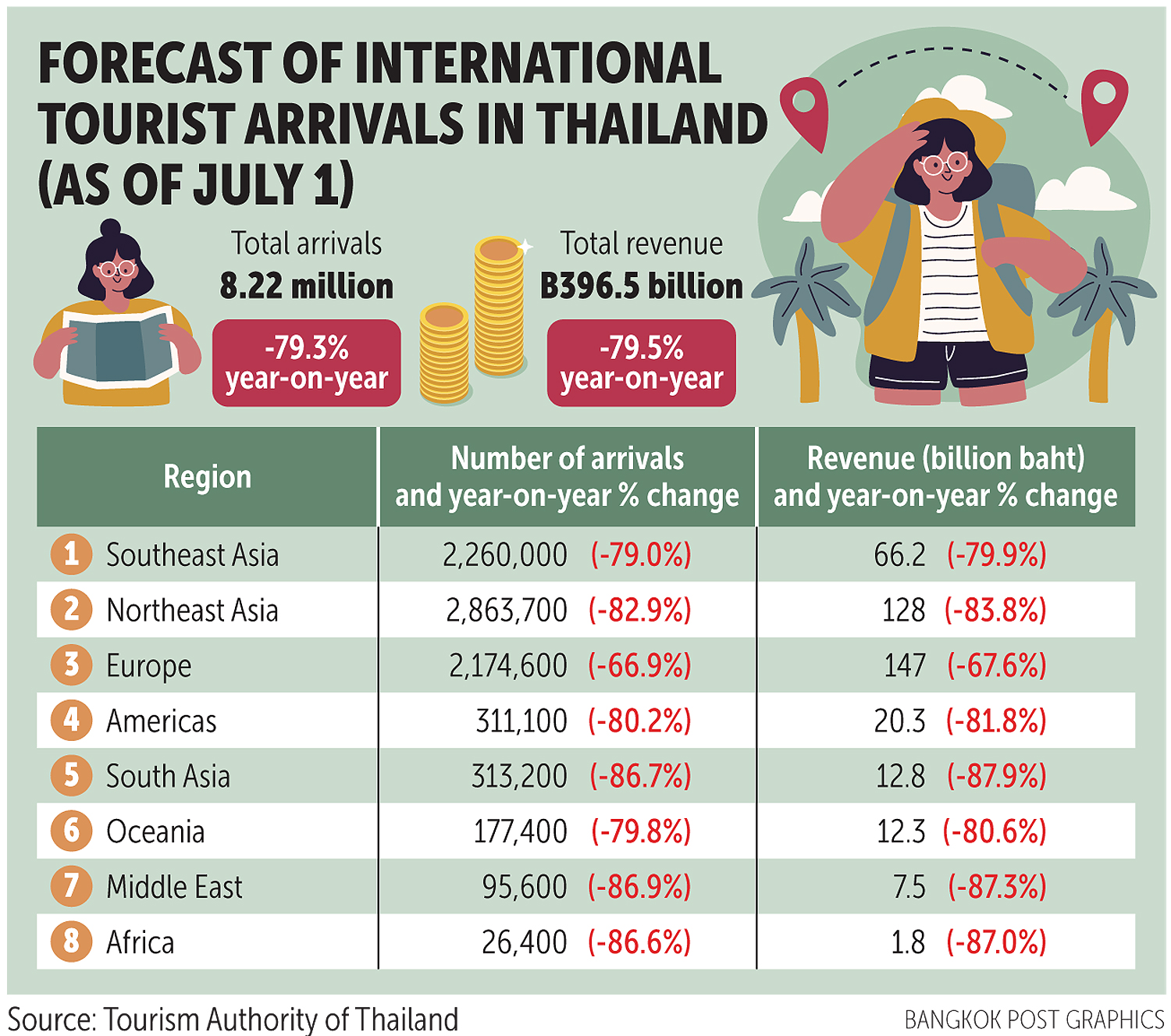 The latest forecast issued on July 1 is based on the current situation in which Thailand welcomed 6.7 million tourists from January to March.

From April 3 to June 30, there were no international arrivals as the Civil Aviation Authority of Thailand (CAAT) imposed a flight ban. Most Thai airlines are expected to resume international services in August at the earliest.

But the global aviation industry's gloomy prospects due to the lack of liquidity stemming from the enforced three-month hibernation to contain the spread of the virus will affect future inbound markets.

Most global airlines have had to implement operations cuts, which will lead to less-frequent direct and indirect flights to Thailand for the rest of the year.

TAT governor Yuthasak Supasorn said the forecast follows the International Monetary Fund's prediction that global GDP will shrink by 4.9% this year, deeper than the previous forecast of a 3% decline.

The economic contraction will create a significant impact on tourism sentiment, which is expected to recover slowly. Thailand expects 14-16 million arrivals this year.

Mr Yuthasak said that while Thailand has eased some restrictions for countries joining the travel bubble scheme, they are limited in number and include residents from some cities in China, Japan, South Korea, Taiwan, Australia, New Zealand, Europe and Southeast Asia.

Reduced demand and the time-consuming process of implementing agreements with each country mean that Thailand will have to wait until December for an evident inflow of international tourists.

After recording zero tourist arrivals and revenue in the second quarter, Thailand may welcome 300,000 international arrivals in the third quarter, down 96% from the same period last year, with revenue of 12.4 billion baht, down 97%.

Mr Yuthasak said the fourth quarter will see a further 1.2 million added to the market with revenue of 51.3 billion baht, but despite the high season those figures are 85% and 90% behind the same period of last year, respectively.

Apart from Thailand, which is preparing to open its borders to countries that have effectively contained the virus, few countries are fully open to international tourists.

The Maldives, one of the leading tourism destinations in Asia-Pacific, has opened to every country without restrictions -- albeit with mandatory quarantine and testing -- but others remain partly open to countries in a mutual bloc or those with bilateral agreements.