Thailand's rice exports are likely to plunge to 6.5 million tonnes this year, the lowest in a decade, from an earlier projection of 7.5 million tonnes because of a spate of negative factors, says the Thai Rice Exporters Association.

Chookiat Ophaswongse, the association's honorary president, said after a discussion with Commerce Ministry officials including Commerce Minister Jurin Laksanawisit, the group offered dim export prospects for the second half, and downgraded its rice forecast to only 6.5 million tonnes this year.

"Thailand's rice exports are hampered by a host of negative factors, be it the coronavirus crisis that weakened global demand, a strong baht that makes Thai rice more expensive, or continued drought cutting into production," said Mr Chookiat.

Thailand's benchmark 5% broken rice price is now quoted at US$520 per tonne, while rice from Vietnam and India stands at $440-450 and $360 per tonne, respectively.

"Thailand's relatively more expensive prices have led buyers to opt for grains from our competitors," he said.

In the first five months, Thailand shipped 2.57 million tonnes of rice, down 31.9% from the same period last year, with an export value of 54.2 billion baht, down 13.2% for the same period. 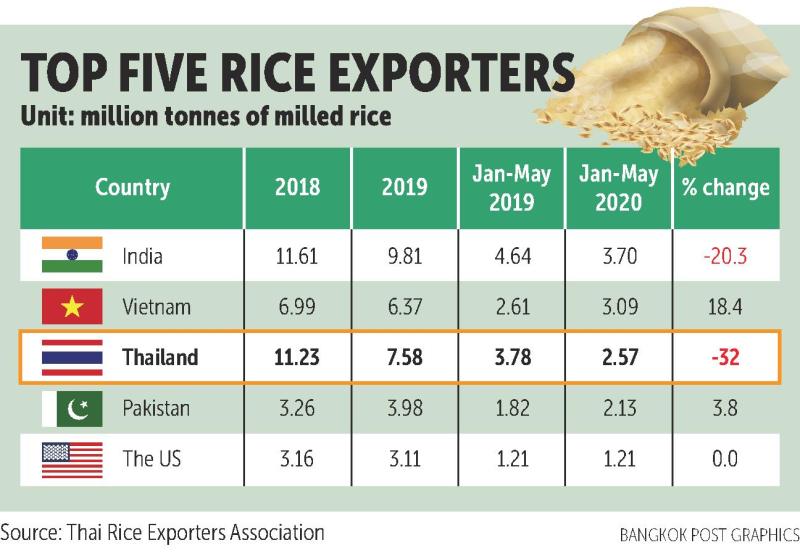 Mr Chookiat said for the second half of the year, Thailand is estimated to ship about 3.5 million tonnes.