Thailand's economy is likely to contract by as much as 11.4% this year, its worst showing, attributed largely to the pandemic impact, volatile foreign exchange, widespread drought and the continued US-China trade spat.

Thanavath Phonvichai, president of the University of the Thai Chamber of Commerce, said the forecast was based on the country being closed to foreigners for at least six months; the 400-billion-baht budget the government set aside for economic and social rehabilitation failing to be disbursed this year; and global trade worsening more than expected.

In April the university predicted the economy would contract by 3.4%-4.9%. 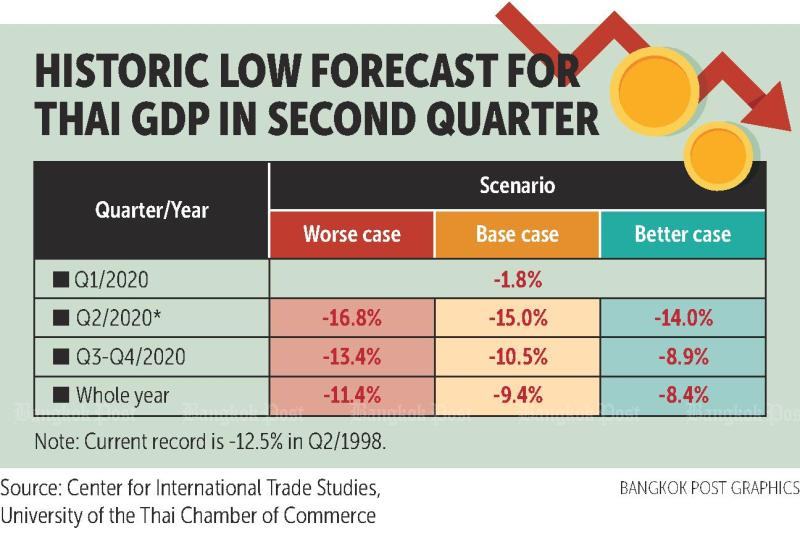 The UTCC also revised its export forecast to a 10.2% dip this year from 8.8-12% contraction predicted in April.

"Under the worst-case scenario, Thailand will see the deepest economic contraction since economic readings began in 1961 under the first national economic and social development plan," said Mr Thanavath.

"The spread of the pandemic resulted in the shuttering of global economic activities, while lockdown measures and subsequent rising unemployment caused people's purchasing power to shrink dramatically. Higher bad debts at financial institutions are anticipated."

He said the crisis was responsible for the heaviest losses to the economy, with estimated losses worth up to 2.1 trillion baht as of yesterday, much higher than the 1.4 trillion baht worth of damages generated by the massive floods of 2011.

The losses stemmed largely from the government's stringent lockdown measures to curb the spread of the deadly virus.

According to Mr Thanavath, Thailand will definitely see higher risks from a drought disaster, leading to continued hardship for the overall farm sector. The university estimated the drought would cause 76.3 billion baht in losses to the country, mainly from sugar cane, off-season rice and tapioca.