Agency sees economy shrink by up to 7.8%

The government's planning unit on Monday downgraded the economic outlook for the whole year to a 7.3%-7.8% contraction from an earlier forecast of 5%-6%, after it reported the economy contracted the most in 22 years in the second quarter.

The National Economic and Social Development Council (NESDC) said the revision was mainly because of the sharp decline in the number and revenue from foreign tourists; the severe global economic recession and drop in merchandise trade; the impact of the pandemic; and the drought.

The forecast assumes the outbreak is contained in the fourth quarter and there is no second wave of infections in the country.

The council expects public investment to grow by 8.6%, an upgrade from 5.6% projected on May 18, with government consumption remaining unchanged at 3.6% growth.

"The government needs to speed up public investment as fast as possible, especially for infrastructure projects which remain delayed," said Mr Thosaporn.

Policy management for the remainder of 2020 should also emphasise measures for Covid-19 prevention and control, together with macroeconomic policy implementation covering coordination of monetary policy and fiscal policy to support economic recovery, said NESDC.

Additional relief for businesses and workers suffering from the impact of the outbreak are needed, while export stimulus to generate foreign currency income to compensate for the decrease in foreign tourist income and to encourage the recovery of production and private investment would be welcome. The government should also provide aid to the agricultural sector because of severe drought and a drop in export prices, said the unit. 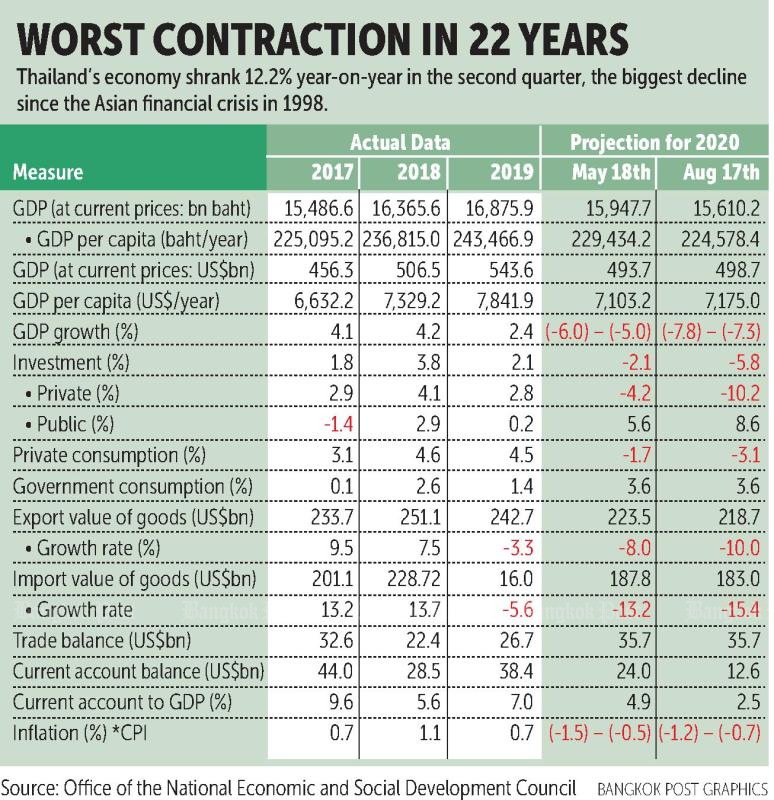 The NESDC urges the government to drive state expenditure; promote domestic tourism and the purchase of locally made products; prepare measures to handle additional risks factors, especially a prolonged outbreak in major countries and the possibility of a second wave, the fluctuation of the global economic and financial markets, and risks from the global economic conditions in the medium term; and maintain the domestic political stability so as not to further aggravate economic conditions and become an obstacle to recovery, which remains fragile and uncertain.

The NESDC reported GDP shrank 12.2% year-on-year in the second quarter, the biggest contraction since the Asian financial crisis of 1997-98.

The contraction was much deeper than the 2% contraction in the previous quarter, attributed largely the fall in export of goods and services, investment and private consumption. After seasonal adjustment, the economy dropped by 9.7% from the first quarter. For the first half of 2020, the economy contracted 6.9%.

"The contraction in the second quarter is likely to be the low of the Thai economy this year," he said.