Worst is probably over, but confidence remains weak across the entire economic spectrum.

Visitors stroll along an empty Khao San Road in the wake of the coronavirus outbreak. (Photo by Pornprom Satrabhaya)

The Thai economy is set for a challenging recovery, as the disruption to exports proves a drag on headline growth. In the second quarter, real GDP growth contracted by 12.2%, from a revised contraction of 1.9% in the first quarter, resulting in a 7.1% drop in first-half GDP.

Lockdown measures in force throughout most of the second quarter to contain the spread of Covid-19 proved a major drag on domestic activity, while border restrictions and lockdowns in other countries proved a major shock to the tourism and export sectors. Over the coming quarters, we see domestic activity recovering gradually as authorities relax confinement rules and stimulus measures feed through.

However, with mass tourism unlikely to resume until 2021 at the earliest, the external sector will continue to prove a major drag on the overall economy. Indeed, job losses and falling income in the travel and tourism sectors will cap the pace of the domestic rebound and as such, we still see the economy struggling to regain its footing in 2021.

We believe the second quarter will mark the worst of the economic shock to Thailand as lockdown measures are eased both domestically and externally, supporting a recovery in global activity that will also be aided by an unprecedented amount of economic stimulus.

The export sector in the second quarter saw a 28.3% year-on-year contraction, outpacing the decline in imports of 23.3%. Service exports in particular suffered due to the halt to tourist arrivals, contracting by 70.4%. This ultimately weighed on the service sector more broadly, with areas such as retail, transport and accommodation posting output declines of 9.8%, 38.9% and 50.2%, respectively.

The confinement measures in the second quarter also curbed domestic activity, with private consumption shrinking 6.6% and gross fixed capital formation 8% year-on-year. The only upside came via government consumption, which grew 1.4% as fiscal stimulus measures were rolled out.

The easing of lockdown measures and authorities' relative success at containing the outbreak should help bring about a rebound in domestic activity in the second half. Our forecasts account for the likely retightening of measures in certain regions or cities for short periods as outbreaks occur, but for the economy to broadly see a continued easing of confinement measures.

The Stringency Index, a measure of the severity of lockdown measures, showed Thailand to have a less restricted set of confinement rules as of early August, compared with its regional peers. Mobility data indicates retail activity was just 3% below its historical levels as of Aug 11, with grocery and pharmacy activity 4% above the baseline levels.

While transit and workplace mobility data imply further scope for a recovery, at 26% and 14% below trend, the low number of reported new cases -- all of them occurring among people in quarantine after returning from abroad -- indicates that authorities could ease measures further. We expect private consumption and gross fixed capital formation to contract by 2.0% and 6.4% for all of 2020, compared with averages of 2.0% and 7.3% in the first half respectively. 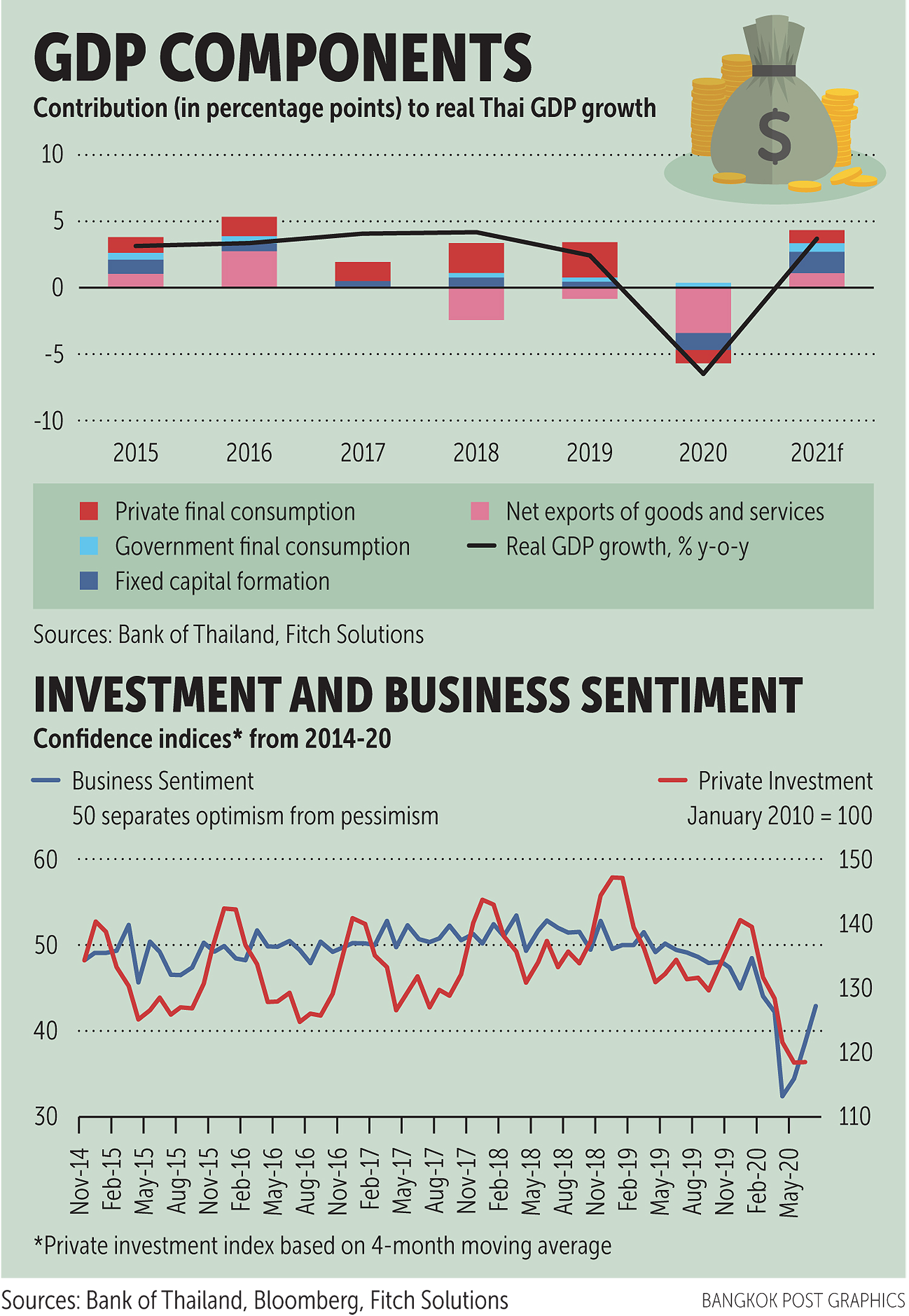 Fitch Solutions expects the domestic recovery in the second half to be significantly supported by stimulus measures, but these will fail to offset the drag from the export sector. Fiscal stimulus measures amount to around 10% of GDP, while the Bank of Thailand has cut its key policy rate to all-time lows and injected substantial liquidity into the credit market to support domestic activity.

Credit growth started picking up in the second quarter, as monetary easing measures fed through to the real economy. We expect fiscal stimulus to feature more heavily as a driver of growth over the coming quarters, as investment and public consumption announced in the second quarter has a delayed effect.

Efforts to ramp up investment in infrastructure and entice companies to invest will require a continued recovery in business confidence and as such, we expect this to play a greater role through 2021.

However, until the tourism and travel sector can begin to recover, we expect overall domestic confidence and activity to be weighed down, as the industry's woes have a ripple effect. We have lowered our real GDP growth forecast to 3.8% in 2021, from a prior forecast of 4.1%, as the recovery in tourism looks set to be delayed. At 19.7% of GDP and accounting for around one in five jobs, the sector plays a key role in fuelling domestic activity.

In the first half, arrivals were 66% below their 2019 levels and with border restrictions still in place, the second half is unlikely to see any noticeable improvement. We expect domestic consumption to recover slowly as incomes remain depressed and employment opportunities in the sector are scarce.

Despite an initial uptake in credit, high levels of indebtedness among low-income households and small businesses could result in a period of higher saving rates and subdued private investment.

We have highlighted the challenges faced by Thailand to attract foreign investment because of weak domestic demand. Without sustained support for household incomes that does not result in rising household debt levels, the economy will only recover to the extent that the export sector is able to recover.