New ventures include electricity storage and joint projects in Vietnam

Ms Preeyanart says her company will not stop looking for opportunities in the energy sector. Pornprom Satrabhaya

Its president Preeyanart Soontornwata said her company will not stop looking for business opportunities in energy sector despite economic slowdown caused by lockdown measures used to curb the spread of Covid-19 worldwide.

Renewables and LNG will be mainstream energy in line with growing concerns over climate change, she said.

Her company is not only a key operator of LNG shipping in Thailand, but it has also teamed up with a local energy firm to conduct a feasibility study on LNG-to-power project in Vietnam, which is expected to be one of the largest power plant in the country.

Its business model and direction will be unveiled within the end of this year.

Ms Preeyanart said the LNG-to-power project is B.Grimm's second deal in Vietnam after it joined hands with Petro Vietnam to study and develop a 3,000-megawatt LNG-fired power plant in November last year.

The collaboration will enable B.Grimm and Petro Vietnam to go further in LNG-related businesses from power generation to LNG import and distribution in Vietnam.

Earlier this year, B.Grimm was granted a licence to operate LNG shipping in Thailand, with import volume of 650,000 tonnes annually to feed its gas-fired plants, run under the small power producer (SPP) scheme.

The plants are being constructed.

The LNG-to-power project is one effort to add value to B.Grimm's existing businesses during currently low LNG prices. Others include more uses of technology to ensure better energy storage and distribution.

Over the past few years, B.Grimm has worked with the world's leading energy technology firms -- LG Chem, Korea Electric Power Corporation (Kepco) and State Grid of China -- to conduct a feasibility study on smart grid, or distributed power generation system.

The technology allows B.Grimm to generate electricity and store it at the same time. 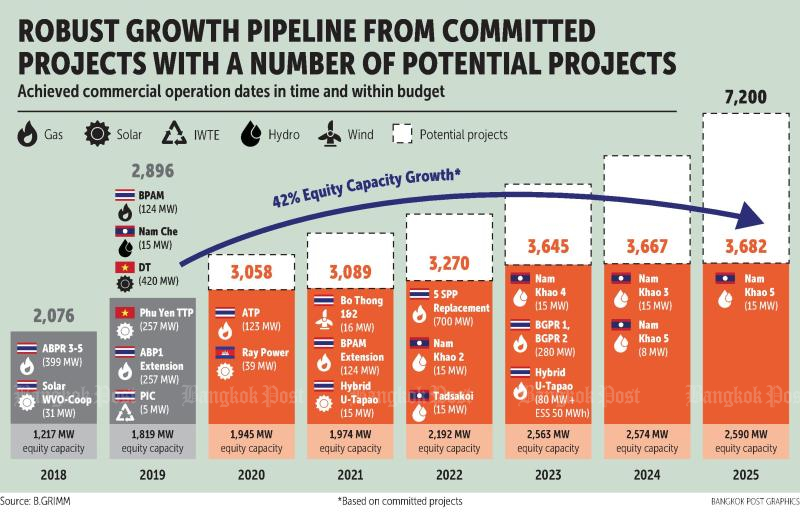 B.Grimm had run a gas-fired power generation firm for more than two decades before it made a big step to diversify its business into renewable energy segment. The move followed its listing on the Stock Exchange of Thailand in 2017.

Its business has progressed smoothly, with double-digit growth each year.

The facilities are run under 20-year contracts to supply Vietnam Electricity Group.

"Both projects have their CODs [commercial operation dates] ahead of schedules," Ms Preeyanart said earlier.

"They increased B.Grimm's electricity generation capacity by up to 31%, making its renewable energy proportion grow to 30% from 10%."

In October 2018, B. Grimm was awarded a project to develop the world's largest hybrid power generation supply by capacity to serve U-tapao airport and nearby Eastern Airport City.

In June this year, the company signed a 29.5-year lease for 100 rai of state land with the Eastern Economic Corridor and the Royal Thai Army to run a 95MW power supply system and produce chilled water at an estimated cost of 3.8 billion baht.

"This will be our pilot project for a distributed power grid," said Ms Preeyanart.

"There are several resources for power generation and we're also planning to work with our strategic partners specialising in smart grid technology."

This year the company prepares 20-billion-baht capital expenditure to expand its businesses. It set another 9-billion-baht credit line for new development and asset acquisitions.

Its asset acquisition deals include five SPPs-owned facilities in Thailand and Malaysia.

The firm is also negotiating a deal with a local wind farm operator in Vietnam.

Ms Preeyanart believes B.Grimm can achieve its goal to expand power capacity to 5,000MW by 2022.