Goal is to add value to agriculture

From left are Savanit Boonyasuwat, division manager of corporate sustainability at PTT Global Chemical, Mr Pravit and Manuel Madani, head of competence center, VNU Asia Pacific and vice-president of the Netherlands-Thai Chamber of Commerce at the S-curve webinar. (Photos by Somchai Poomlard)

The government is pushing ahead with the bio-economy concept to modernise agriculture with advanced technology in a move to improve the national economy.

Bio-economy, which uses renewable resources and turns them into value-added products, is expected to help farmers better deal with unstable crop prices and convince various industries such as automotive and electronics to come up with new products.

Authorities put agriculture and biotechnology, which are at the core of a bio-economy, on the list of 12 targeted S-curve industries, covering a range of businesses from cars and smart electronics to affluent and medical and wellness tourism.

The S-curve initiative will be a new tool to grow the Thai economy, Alongkorn Ponlaboot, adviser to the agriculture and cooperatives minister, said on Thursday.

"Such crops as sugar cane, cassava and rice can be developed into value-added products. The government is preparing biochemical projects for them," he told a webinar co-organised by the Thailand Convention and Exhibition Bureau, the Thai Chamber of Commerce and Post Today. 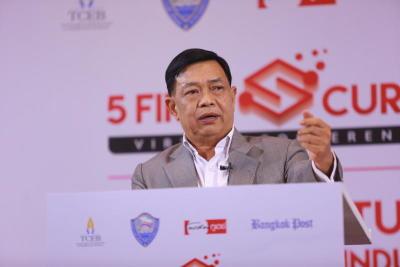 Mr Alongkorn says the country needs to improve its labour skills for a bio-economy.

Mr Alongkorn believes Thailand has high potential for a bio-economy because it has a large agricultural base and is a major food exporter.

He said biochemical projects must be supported by innovations and advanced technology, with cooperation from farmers and companies.

The Industry Ministry launched biochemical projects to upgrade crops such as cassava by turning them into pharmaceutical-grade raw materials, as well as food and feed products to serve the global market.

The government plans to support biochemical projects and related research until 2026. The goal is to strengthen five sectors: bioenergy, biochemicals, food, animal feed and biopharmaceuticals.

Sugar cane and cassava are used as raw materials for many industries such as ethanol, bioplastics, food, bioenergy and biopharmaceuticals.

The Agriculture and Cooperatives Ministry expects the bio-economy will help Thailand escape the middle-income trap.

Pravit Prakitsri, chief operating officer for new business group of Mitr Phol Sugar Corp Ltd, said his company has developed new products based on biochemical technology from upstream to downstream production because it sees potential in this sector.

"Many companies, including small firms, aim to develop new products to serve growing demand for alcohol gel and biocosmetics," he said.