As the virus crisis lingers, the government is struggling to find a way to open up the country to tourists that appeals to all parties

A sign at Patong beach, Phuket, notifying visitors of temporary closure during the Covid-19 outbreak earlier this year.  Photos by Achadtaya Chuenniran

When the deadly virus was first reported in China early this year, nobody would have imagined it would become an uninvited long-stay guest who cost the global community a heavy price to host it.

Countries that rely on tourism have been laid low as the UN World Tourism Organization revealed US$320 billion has been lost, with global destinations reporting 56% fewer international travellers in the first five months this year.

The US has lost $30 billion in tourism revenue, followed by Spain at $9.7 billion and France at $8.7 billion.

Prior to the pandemic, the National Economic and Social Development Council predicted Thailand should have 3.93 trillion baht in tourism receipts in 2021, up from 3.01 trillion in 2019.

But that goal has been thrashed by the ongoing crisis, with the country struggling to find a balance between health security and economic survival.

The outlook for Thai tourism has changed drastically as the country grapples with how to lure travellers while keeping its citizens safe.

The government is still unsure about how to open the borders to foreigners without triggering an outbreak following a second wave in neighbouring countries.

The Tourism Authority of Thailand (TAT) was assigned to work with the Public Health Ministry and the Centre for Covid-19 Situation Administration (CCSA) to find a middle ground acceptable to all parties to allows foreign tourists to arrive without sparking an outbreak.

TAT governor Yuthasak Supasorn said the tourism plan for foreign arrivals should be concluded by September and will serve as a manual for every province in the country, not only Phuket.

"We are not calling the pilot plan the 'Phuket Model' anymore as we don't want to make the community there feel like this is an experiment," said Mr Yuthasak. "Every province that is ready to welcome international tourists will follow this scheme."

After the government determined to let tourists stay in a sealed location among a few hotels in Phuket last month, it drew lots of criticism from the local community and caused a number of booking cancellations from Thai guests.

The negative feedback prompted the Tourism and Sports Ministry to make a U-turn on the 14-day quarantine and make alternative state quarantine (ASQ) facilities mandatory for inbound guests.

The cabinet is expected to approve a special tourist visa within this week, paving the way for foreigners who want to spend an extended vacation of up to 270 days in Thailand. This scheme is projected to ease the procedures needed to obtain a visa.

Mr Yuthasak said Thailand is "strategically reopening" to foreign tourists, gradually increasing the number of visitors from less than 300 per day in select destinations.

If the first and second batches of foreign tourists do not lead to an outbreak, the country can increase the number of guests per day based on the capacity of the health care system at some destinations, allowing more provinces to take part by following this regimen, he said.

This is the outline of the government's plan for the fourth quarter, as it hopes international travellers will fill empty streets, restaurants and hotel rooms across the country next year, with the TAT hoping for 20.5 million foreign arrivals in 2021 for its best-case scenario.

"There are a few conditions that must be met, with the most important we must abide the Public Health Ministry's instructions, adopting the same screening and surveillance standards as are used for Thai returnees. We need to have a risk management plan in place and should have public consensus on those rules mentioned," said Mr Yuthasak. 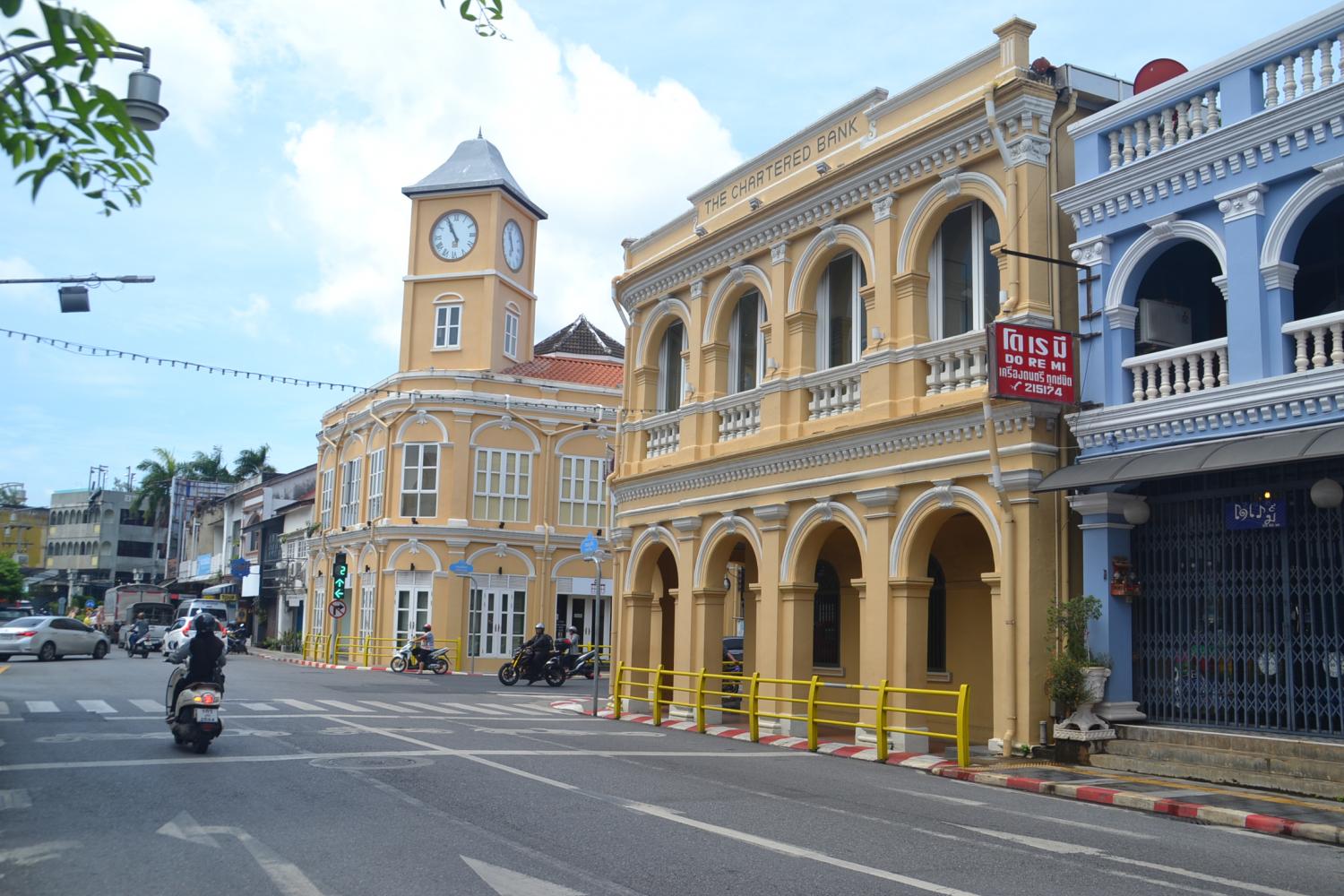 Buildings in old Phuket town. The government plans to reopen Phuket to international tourists first under a model that has several phases.

While the government is working on a reopening plan, the tourism industry is praying the scheme will not create confusion as in the past.

Marisa Sukosol Nunbhakdi, president of the Thai Hotels Association (THA), said hotel operators are encouraging the government to start with a well-managed plan.

"It's necessary to begin properly, knowing what the scheme will really mean for our members," she said.

To avoid the misunderstanding of the Phuket Model, Mrs Marisa suggested the government make use of the successful model utilised for Thai returnees and 11 groups of foreigners that were allowed in the country.

"The government should inform the public that tourists are required to stay in ASQ hotels that have high safety standards," she said.

Many hotels in Bangkok and Pattaya have already received guests during the pandemic and none reported a case of local transmission, said Mrs Marisa.

Some properties even have split sections for inbound guests in quarantine and local residents in the same area. Stringent measures allowed the properties to avoid any risks to employees and guests, she said.

Part of the scheme should be to allow incoming guests from low-risk countries first, such as those from Taiwan and New Zealand, to mollify local concern.

Phuket hoteliers have lagged those in Bangkok and Hua Hin, with only 22.5% average occupancy from January to August. Only 10% of hotels in Phuket have reopened, said Mrs Marisa.

According to THA, weak demand from local residents has made 90% of operators hesitant to reopen, as operation costs are likely to exceed revenue.

Anthony Lark, president of the Phuket Hotels Association, said hotel operators acknowledge how difficult it is for the government to decide whom to allow in and when.

"As an island we have worked so hard and sacrificed so much to create a relatively Covid-19-free province since June, and we must protect this status," said Mr Lark.

"The government found this middle ground and it is worthy of a trial. A 14-day quarantine seems to make sense to us."

He said many guests wrote to the association indicating they would prefer to quarantine in a pool villa or next to the beach rather than in a city hotel with no beach or gardens.

The government scheme seems to be pragmatic, said Mr Lark.

The ASQ system includes extensive measures designed to protect staff from infection, and those who deal with quarantine guests would most likely stay in the hotel and be subject to testing. Government officials claim the system has proven successful in Bangkok.

After two weeks pass and at least three tests return negative, tourists should be clear of any risk of infection and they can travel elsewhere in Thailand. 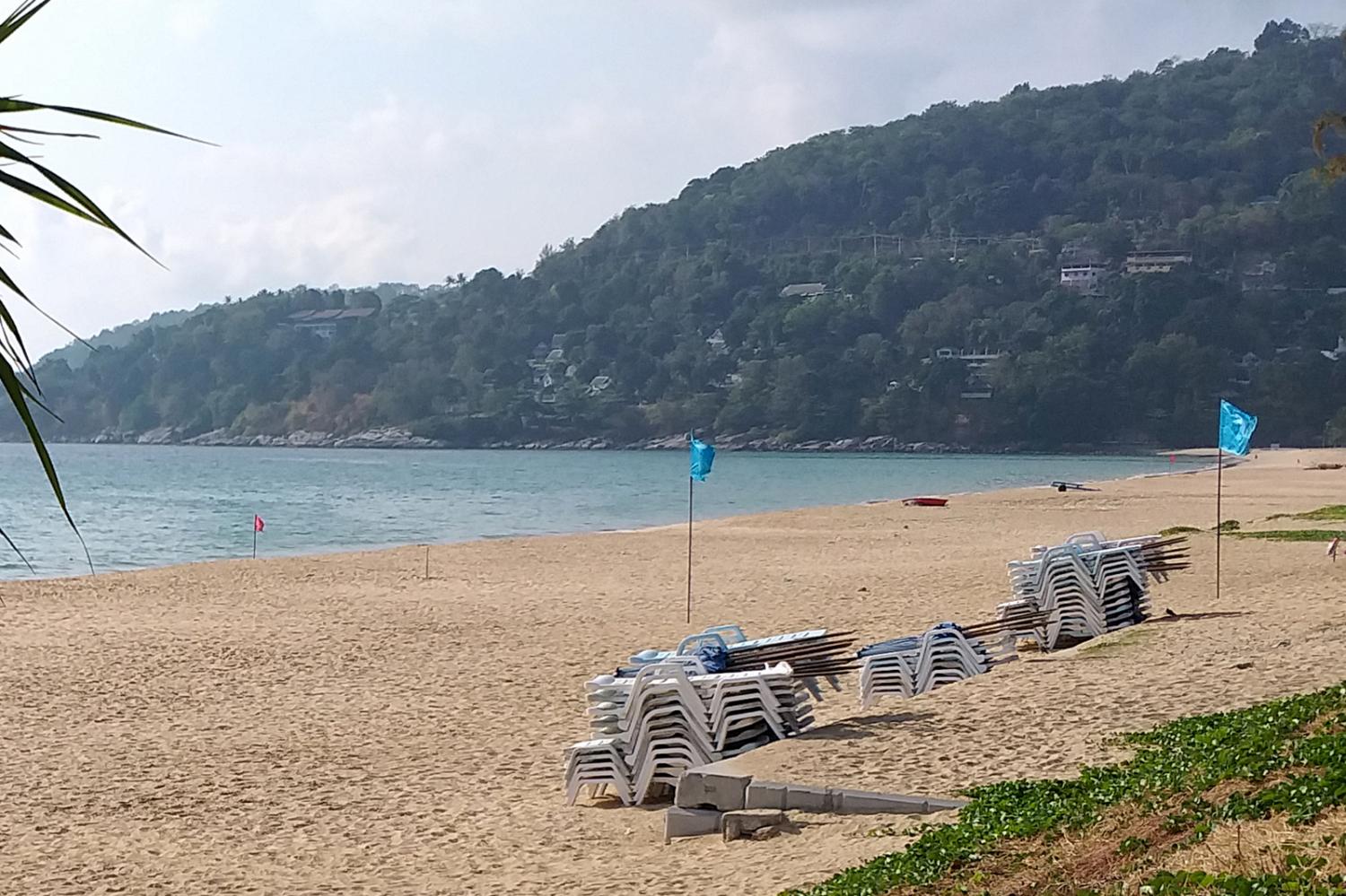 An empty beach in Phuket as travel restrictions have left the usually thronged island deserted.

While Phuket serves as the national Petri dish, Koh Samui hopes to play a larger role in the next phase of reopening.

Vorasit Pongkumpunt, president of the Tourism Association of Koh Samui, said operators must build a better understanding among locals about a practical tourism plan and how returning tourists will benefit the overall community.

He said about 80% of residents on the island agree with a reopening plan after operators held discussions with leaders of each community.

But it is vital to stress a 14-day quarantine in ASQ with strict safety measures such as surveillance monitoring from officials around the clock in order to gain support from locals, said Mr Vorasit.

Samui has been approved to receive 200 visitors per month during a pilot programme, and there are 200 hospital beds available there and a laboratory that can provide 200 polymerase chain reaction tests per day, sufficient for the number of tourists.

Some 24 hotels located far from community areas applied for the ASQ scheme and expect to be approved by the end of this month.

Mr Vorasit suggested the CCSA, Tourism and Sports Ministry and TAT communicate to the locals with a single message.

"You can't win consensus without presenting a comprehensive plan. The government cannot reach consensus at a national level, so how can they do this at a local level?" said C9 Hotelworks managing director Bill Barnett.

He pointed out there is a demonstrated winter long-stay market that does not mind quarantine in a nice hotel versus sub-zero weather in Europe. The reopening plan just needs to be initiated to prove the concept, said Mr Barnett.

For a plan to be successful, there must be clarity on the processes at a ministerial level involving immigration, foreign affairs, public health bodies and civil aviation, and this needs to be consolidated and communicated in a clear plan, he said.

Though Thailand has been successful in controlling the pandemic, the Federation of Thai Industries (FTI) insists the government must remain vigilant in terms of health measures to stymie the virus.

The federation agrees in principle with the initiative to selectively allow foreign tourists to enter Thailand, but attempts to prevent the spread of the highly contagious virus must not be compromised, said FTI chairman Supant Mongkolsuthree.

He suggested the government issue a "special visa" for tourists who want to come to Thailand. They would go through a strict visa approval process.

Officials should give approval priority to those with high income, said Mr Supant.

"Wealthy tourists can certainly stimulate the economy thanks to their high spending," he said.

"Their financial status will reflect the quality of tourists. They can afford to pay for their health without causing a burden to the government."

But a think tank believes tourist behaviour has changed because of the Covid-19 crisis and even a vaccine is unlikely to shore up the tourism industry anytime soon.

"Even with a vaccine, it doesn't solve every problem right away. This is because vaccinated people may still be infected and become carriers of the disease," said Phacharapot Nantharamas, senior director Krungthai Compass.

"Tourism businesses will have to rely primarily on domestic tourism and they need to adapt to this change by earning more income from Thai tourists."

Although some operators can adapt to this new paradigm, it is hard to believe Thailand's tourism revenue can reach its past levels without foreign tourists, said Krungthai Compass analyst Kittipong Ruentip.

FDA dismissed ex-prime minister Thaksin Shinawatra's claim that the Pfizer vaccine was already in Thailand for emergency and exclusive use among a certain group of people.